Note: due to a complaint, images have been removed from this web page.


Many people notice this circular ghost sign as they queue to turn into the top of Argyle Street from Woodbridge Road. Quite a few get in touch with this website to tell us about it...
February 2014: the cement rendering on the end wall largely dropped off. What lies underneath?
The only obvious shape on the brickwork is a blue 'O' to the right. The close-ups suggest that it might be a 'Q' as there is a clear tail at lower centre. No other lettering is visible (so far).

What on earth can it be advertising?
There is a buckle to the left and the strap with its hole reinforcements and it seems to have a kind of serpentine double-hook on the end. Painted quite realistically, the hook to the left projects out and its head drops down; it still bear some gold paint. There are little projections about two-thirds of the way up these shapes. The sign painter has given the shapes shadows to suggest three-dimensionality. 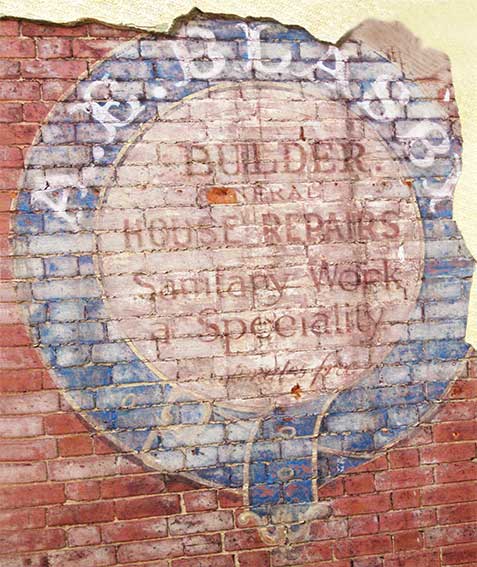 We are grateful to several people who reported this odd sign to us. For example, Nigel wrote:
"I was driving down Woodbridge Road the other morning and I noticed that on the corner of Argyle Street the side rendering [has been] removed revealing what looks like a large blue circle painted directly onto the brickwork. I couldn’t make out if there was any lettering as I was in the car and couldn’t get a good enough look. I thought I’d better let you know before it gets covered up again!... I see the page is up now. Very intriguing! It reminds me of something but I can't think what... Anyway, thanks for one of the best sites on the web."
[UPDATE 12.3.2014: "I've just remembered what the Argyle Street circle reminds me of:

It's the Order of the Garter - I have no idea how it would be significant to an end of terrace house/shop in Ipswich though! Cheers, Nigel"] Extraordinary...

[UPDATE 12.1.2015: the weathering of this sign now reveals white lettering in a decorative font, curving over the upper part of the blue 'Garter'. These letters spell out:

Researches suggest that A.E. Blasby & Son Ltd were incorporated 11.11.1948 and the company was dissolved 13.8.1996; the company carried out general construction and civil engineering.]

We are told that a timber yard once occupied the area in front of this wall, currently a car parking area for Argyle Street School. Presumably this yard belonged to A.E. Blasby & Son Ltd, which would explain the sign.
[UPDATE 22.8.2018: 'I hadn't realised that the A.E. Blasby sign had been exposed for so long. 2014?! Thought I'd look them up in my various Kelly's directories:
* 1947 -- listed as builders at 12 Brooks Hall Road with a workshop at 245 Norwich Road
* 1952 -- moved to Bramford Lane (between Wellington St and Chevallier St)
They're still there in 1973 on the north side of Bramford Lane next to the workshop of Elliston, Steady and Hawes. No mention of any addresses near Argyle Street so would assume they simply paid for that prominent advert. Ed Broom.' Thanks to Ed for adding more detail about this Ipswich company.]

N.B. this garter motif crops up again on a Great Eastern Railway armorial on the interior wall of St Mary-at-Stoke Church.