Delft
Delft played a highly influential role in the Dutch Golden Age (1581, the birth of the Dutch republic, to 1672). Its most famous son is probably the Northern Renaissance painter supreme, Johannes Vermeer (1632-1675). The city is also noted for Delftware (blue-and-white pottery) and canals, which criss-cross the roads and buildings. Once used for trade, they are now focuses of leisure and improving the environment.
Oude Kerk, or Old Church 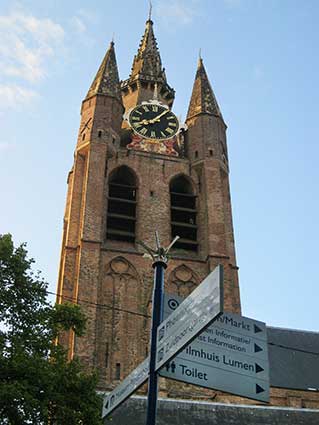 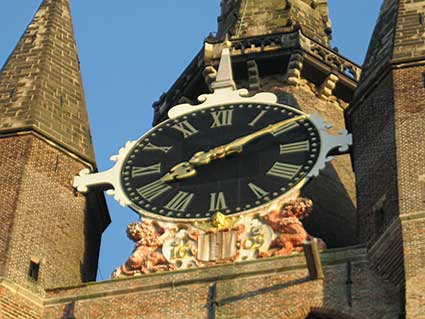 2015 images
The decorative clock, with its gold-on-black numerals, sits on a royal coat of arms bearing the gold date '1605'. The date must relate to the clock, as the church is much older.
The Oude Kerk was founded as St. Bartholomew's Church in the year 1246, on the site of previous churches dating back up to two centuries earlier. The layout followed that of a traditional basilica, with a nave flanked by two smaller aisles. The tower with its central spire and four corner turrets was added between 1325–50, and dominated the townscape for a century and a half until it was surpassed in height by the Nieuwe Kerk (the Protestant New Church whose tower was built 1396-1496, see below). Carillons in church towers are common in Holland, enabling the rings of bells to play tunes at preset times during the hour or day. 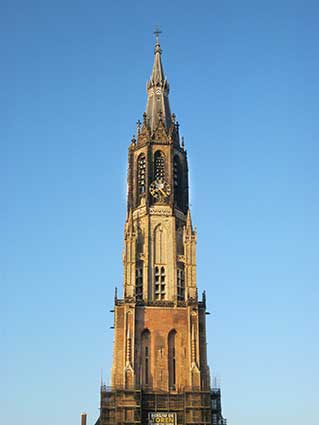 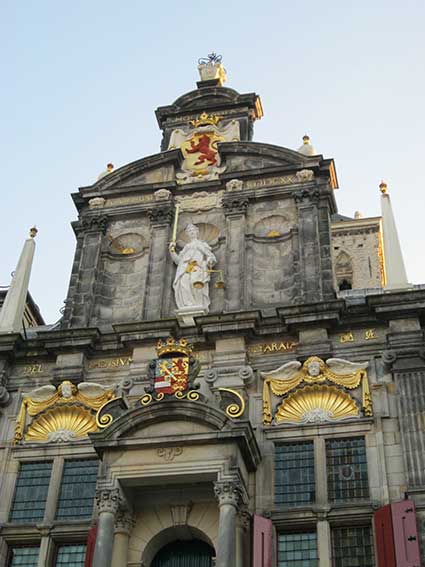 The City Hall is a Renaissance-style building on the Markt (market square) across from the Nieuwe Kerk. Resembling a church, it has a belfry dating back to 1300, however, much of the rest of the building was destroyed by fire in 1618 and had to be rebuilt. It bears gold lettering: 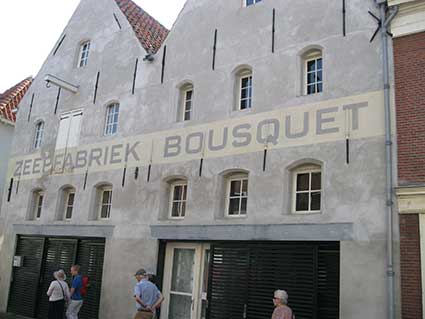 Former soap factory Bousquet; the factory was founded in 1693, but it ceased production in 2003. 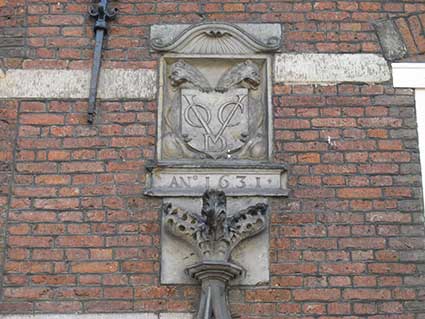 'VOCD': Vereenigde Oostindische Compagnie (VOC) Delft. This was the Delft chamber of the Dutch East India Company (VOC), founded in 1602. The College of Delft supplied one representative to the VOC supreme board. 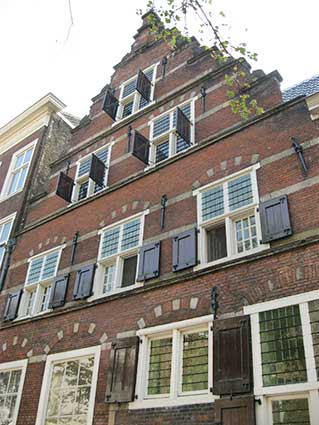 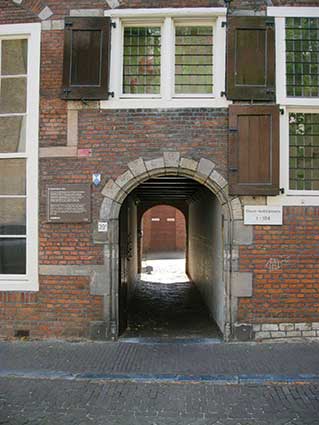 Above: the crow-stepped facade of East India House is typical of a wealthy merchant's home. The apparent tilting of the top over the pavement is real: this was designed so that a gantry from the apex of the building could winch up heavy furniture and goods to the upper windows without fouling the frontage. This was a common feature of these 17th century houses. 39a is the entry into a central courtyard. It was the seat of the Delft Chamber of the ‘United East India Company’; it came into being in 1631 after joining some older buildings. The back was later enlarged with a storehouse wing. The building is now now apartments. It overlooks the canal Westsingelgracht.

Gouda
Gouda is a city and municipality in the west of the Netherlands, between Rotterdam and Utrecht, in the province of South Holland; it dates back to 1139. It is undoubtedly best known for a type of cheese, but there is much more it.
Lazaruspoortje '1609' 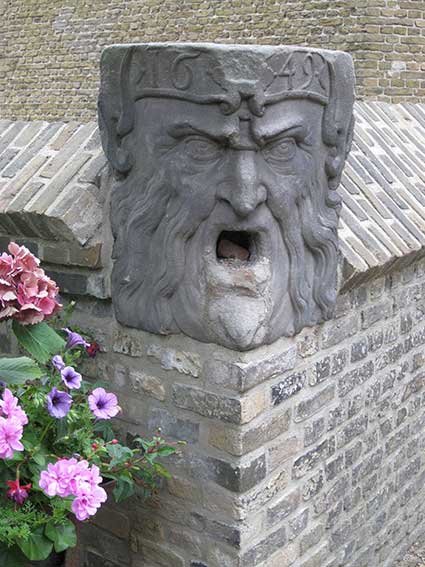 The parable of the rich man and poor Lazarus are depicted on the Lazarus Gate. The Lazarus Gate was made in 1609, probably by the Gouda city sculptor Gregorius Cool, as a gateway to the then leper house on the Gouwe in the Dutch city of Gouda; it is now the entrance of the garden of the museum in Gouda. The corner carving (presumably a gargoyle) mounted on a wall in the garden bears the date: '16...49'.
This very decorative entrance is typical of historical architecture in this part of Holland. While it is admirable that such things are identified, preserved, cleaned and repainted (and given an information panel for tourists and architectural students). However, there is a tendency for the ancient buildings to be 'restored within an inch of their lives'. Some of them have gleaming surfaces, plasterwork and paint so that they look as if they were built in the 1980s. One might suggest that the word 'sympathetically' might go before the word 'restored'. At least these relics are preserved for future generations to enjoy, rather than the authorities destroying them to build modern commercial premises – it's a trade-off worth making. 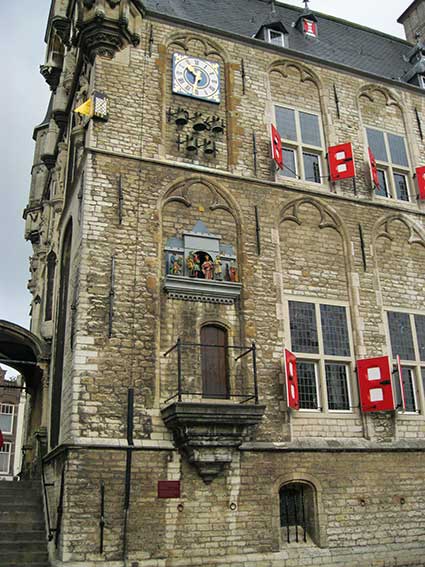 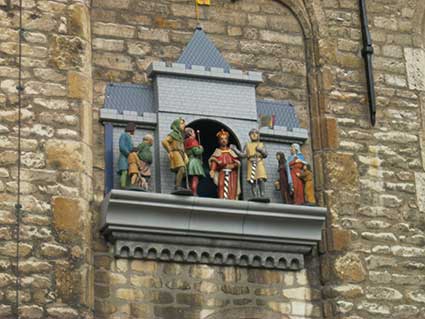 The carillon plays every half-hour on the bells seen above. Figures in a diorama move at the same time, central doors open and Floris V hands over the documents confirming Gouda’s city status.
At the top of the building, to the left of a fine clock face, is a corner sun dial with golden gnomon. 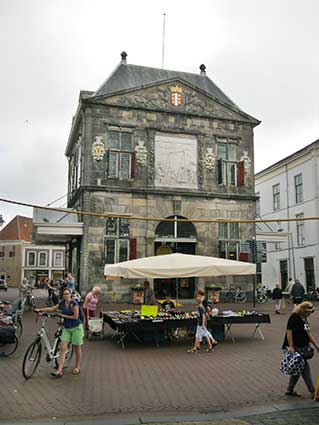 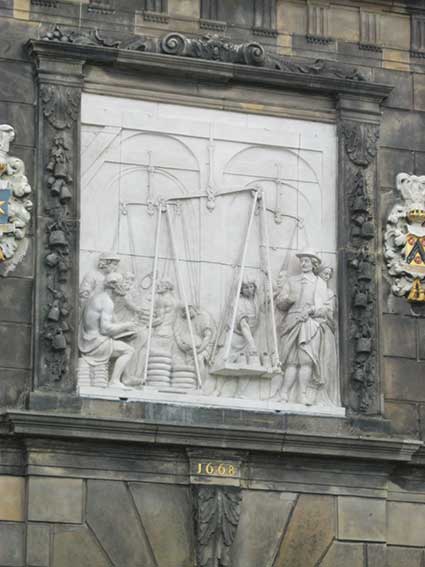 This classical structure was built in 1668 by Pieter Post. Its facade is decorated by a bas-relief representing the weighing of cheese, which used to be carried out here; the ancient weighing scales can be seen inside.

Gouda, Hotel de Zalm, Markt 34, 2801
De Zalm is the oldest inn in Gouda city. In 1551 the inn was called the Old Salm or Gilded Salm. In 1670 was built the historic Waag building by the architect Pieter Post located next to the tavern. The word zalm means salmon and its statue was returned to the roof in 2006.
On side of the next-door Hotel de Zalm is a relief of a glum-looking salmon. 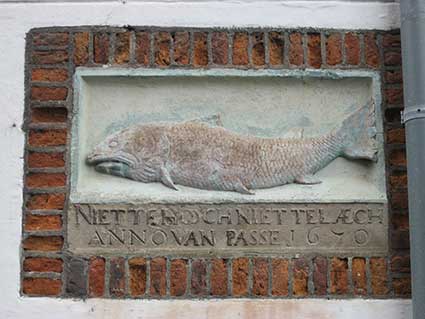 this translates as: ‘Not too high not too low, just right’. This relates to an ancient dispute between neighbours. With the construction of the de Waag by famous architect Pieter Post, and in order to guarantee the prestige of their new building, the city council demanded that it’s height become a benchmark for other buildings in the area. The roof of the adjacent building, the Inn called de Zalm, built in 1670 was required to be at least 6 feet lower than de Waag (also completed in 1670) according to city government regulations, much to the displeasure of the inn's owner. This displeasure is recorded in stone with a picture of an angry looking salmon and the text in old Dutch.

Tucked away towards the rear of this bar/café is a remarkable 1924 Art Deco mural by artist Piet den Besten (1894-1972). It is the largest surviving work in this genre in the Netherlands. Thirteen dancing women (three figures were lost through previous renovations), with alternating black, blond and red hair in colorful, elegant robes, adorn the walls of what is stylishly called the Salon. In 1951, when white decor was fashionable,  the work of the artist who received an encouragement prize for young talent from Queen Wilhelmina before the war was covered up. The nymphs in Jugendstil ('Youth Style') were lost behind wallpaper. The layer was only removed with the aid of a steamer in 1991. Surprisingly, the paintings were still well preserved and could be restored. The canvasses were cleaned, which brought the colors back to life. 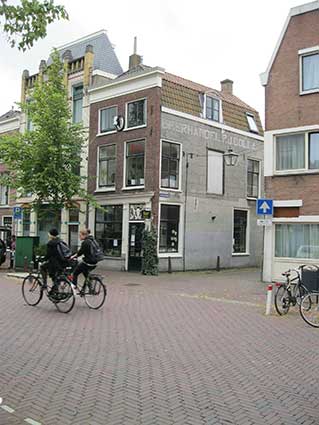 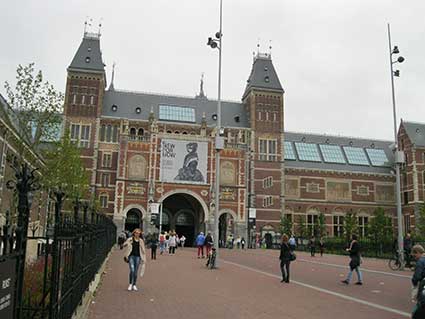 The Dutch national museum, dedicated to arts and history in Amsterdam, had been closed for ten years for renovation. This photograph two years after reopening (which had occurred in 2013). One wonders what would happen if The National Gallery on Trafalgar Square closed for ten years. The design by Pierre Cuypers was a combination of gothic and renaissance elements. The construction began on 1 October 1876. On both the inside and the outside, the building was richly decorated with references to Dutch art history. Another contest was held for these decorations. The winners were B. van Hove and J.F. Vermeylen for the sculptures, G. Sturm for the tile tableaus and painting and W.F. Dixon for the stained glass. The museum was opened at its new location on 13 July 1885. 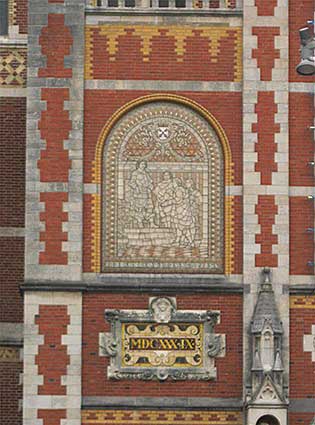 The date in Roman numerals, 'MDCXXX1X', is 1639: the date of the Battle of the Downs. A Dutch National Art Gallery (precursor of the Rijksmuseum) was not established, originally in The Hague, until 1800.

Built beside the river ... in 1864, the brewering side of the company moved to a new 'factory' on the outskirts of the city in 1988. The site is now 'An Experience': perhaps they've been listening to Jimi Hendrix? The original brewery facade is, as is charateristic of many historic buildings in Holland, clean and well preserved with delighful dark brown lettering on a gold background in a tiled band across the width of the building: 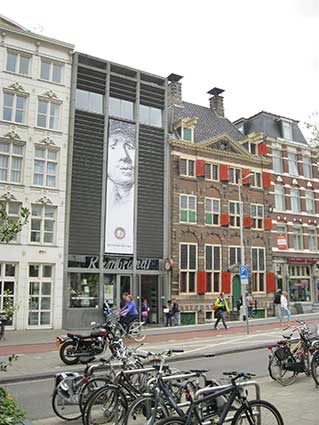 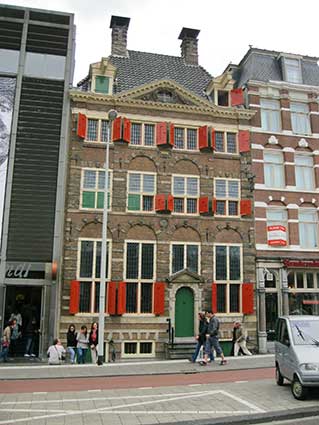 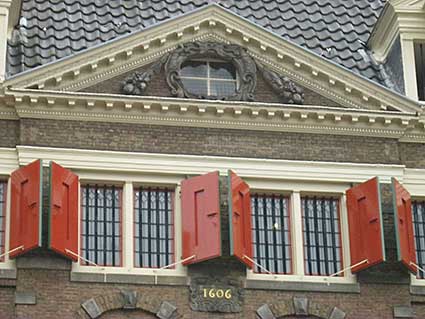 Painter and engraver Rembrandt Harmenszoon van Rijn (1606-1669) lived and worked in the house between 1639 and 1656. The 17th century interior has been reconstructed. The collection contains Rembrandt's etchings and paintings of his contemporaries. The next-door house has a modern facade and acts as the entrance and shop to the museum. The fine, wealthy house has a decorative facade with the familiar red timber shutters.