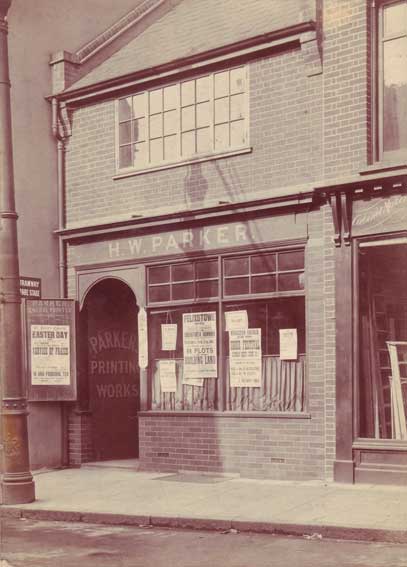 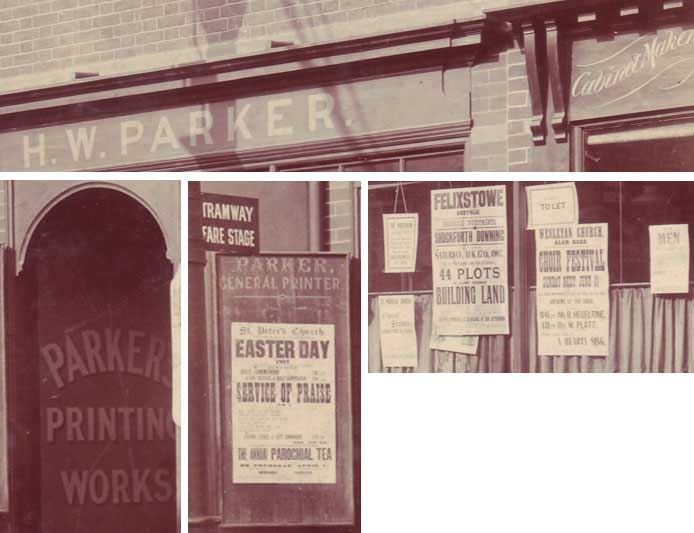 "My great great grand-father H.W. Parker had a printing business in Fore St, Ipswich in about 1890. He took over the business from his father B.B. Parker who also operated a printing business at a different location in Fore St.  I have four 8" x 10" original photographs of both the outside of the business and the print shop and office areas, taken around 1900. If they are of any use to you, I am happy to email you copies of the pictures.  I see from Google Earth, that the building is still in use, but these days is operated as a hairdressing salon.  At one stage, they lived at 129 Fore St, Ipswich. Both BB and HW were involved with St. Clement's church, Ipswich and BB's father and grandfather  were both Sexton and Clerk Sexton at the same church.  There are memorials in the church grounds to them both and their wives Sarah and Ann. Regards, Gil James, New South Wales, Australia"

The sample printed poster on the board to the left reads: 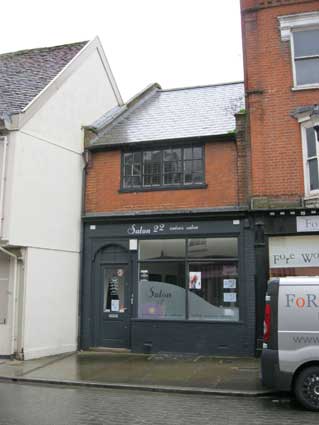 2014 image
Above: the shop at 22 Fore Street has changed very little on a cold, wet, February day in 2014. The upper window, roofline and arched front doorway are all identifiable. The cast iron tramway power line pole has gone and beenreplaced, just out of sight to the right, by a modern 'retro' lamp-post on a reshaped paving scheme. (The former Wheatsheaf public house with its oriel windows projects out further into the street to the left: a 17th century private dwelling house, with offices and wine and spirit retail department, the whole was fully licensed as the Wheatsheaf at 24-26 Fore Street around 1865; not listed as a pub by 1932.) Despite its narrow frontage, this shop clearly had a sizeable interior/extension behind it... 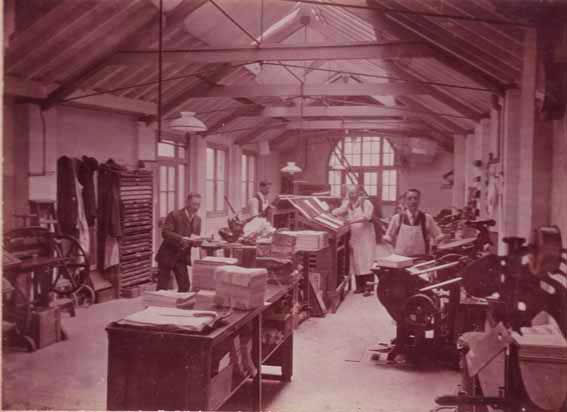 Photos courtesy Gilbert James
Above left: "Harry William Parker is the one leaning on the bench.  As he was born in 1855 and is about forty in this photo, I guess that these pics were taken c.1895."
Grateful thanks to Gil for getting in touch and for the fascinating photographs. 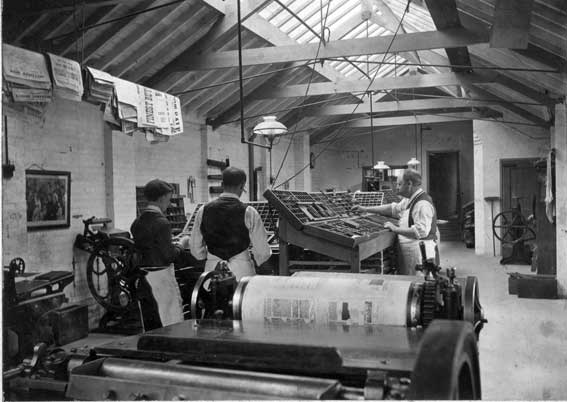 The cases of moveable cast metal type are stored in a stout cabinet (they are very heavy), which can be seen behind H.W. Parker in the sepia tone photograph. Someone with strong arms and shoulders slides out the case for the smaller characters and symbols (the 'lower case') in the required font and place it on the front, slightly sloping area of the composing bench, held in place by the timber ledge. Woe betide any print worker who drops a case. They then remove the tray containing capitals letters and symbols (from the 'upper case') in the required font and place it on the more steeply sloping area, resting on the lower case. Hand compositing from these cases can be seen to the right in the last photograph. The compositor holds a composing stick (a right-angled section metal channel with a stopped end) in one hand and selects back-to-front characters with the other, as they are placed in the stick held at an angle, a nick in the body of the character can be felt with the thumb to ensure that the character is the right way round, the nicks lining up and forming a groove all the way along the line of type.  The words in a line ('line o' type') are then transferred to a galley with furniture to occupy blank spaces, the complete page is then locked into a forme, inked and proofed. Once the job has been printed, the type is cleaned and the whole process reversed. A painstaking and labour-intensive occupation which resonates back through the centuries to Johannes Gutenberg (c.1395-1468) and William Caxton (c.1415-1492) when fonts were hand carved. This moveable type revolution in replication of texts and ease of distribution to readers further afield transformed the world and human culture. The current digital revolution of global information and communication (both words debatable in many cases) overload is being compared to the revolution caused by moveable type.