London, we know, is a massive resource for public lettering from times past. We include here one of several galleries of lettering images to give a hint of these riches. If you have any information about any of the signs, do email us.

These images come from a walk from The Angel round to the Olympic Park, along the Regent's Park Canal. 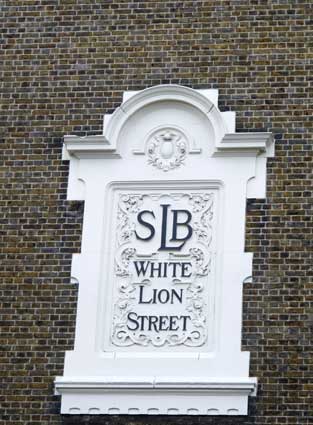 This fine piece of relief work is well preserved and lettered, although to push the downstroke of the 'L' to the centre line, there's an uncomfortable space between it and the preceding 'S' – not to mention a crush with the following 'B'. This plaque is on the wall of New River College. The letters 'LSB' stand for London School Board, the education authority which erected the building as White Lion Street School. The college took its name from the New River, a 17th century artificial 'river' which carried drinking water 20 miles from the River Lee and Amwell Springs in Hertfordshire to reservoirs in Islington. One of these reservoirs stands in nearby Claremont Square and in 2009 was still in use by Thames Water.
We have come across this write-up (published 1 June, 2012): 'Acrobats from Archway theatre group Scarabeus scaled the walls of the former White Lion Youth Centre at the weekend to help mark its transformation into a state-of-the-art youth “hub”. The Lift, in White Lion Street, Angel, has a gym, professional kitchen, dance and exercise studios, café and a roof garden.' 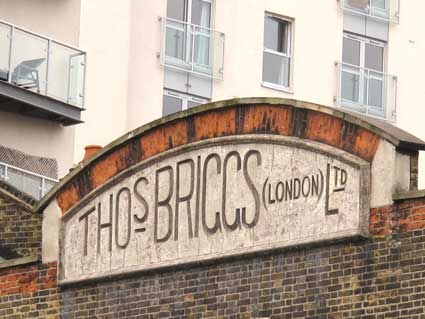 This central curved panel could be a challenge to the letterer, but they've made a fair fist of the capitals of varying heights, superior 'S' and 'TD' and small bracketted '(London)'.  This Victorian factory in Southgate Road, Islington now seems to be wholly residential. There is a similar lettered rectangular panel high on the wall overlooking the canal. Thomas Briggs were tentmakers who supplied the British Army. 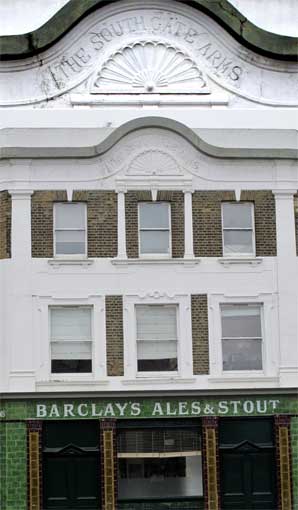 A closed-down public house at 1 Southgate Road, N1. The nicely tiled ground floor surround continues to the left and round the corner with the brewery name repeated and 'The Southgate Arms' over the corner door. Pedants' corner: in the upper curved lettering, there is a gap between the words 'South' and 'Gate' (unlike the name of the road and the suburb in north London),  however the tiled name on the corner is 'Southgate'; also a nicely placed posessive apostrophe after 'Barclay'. 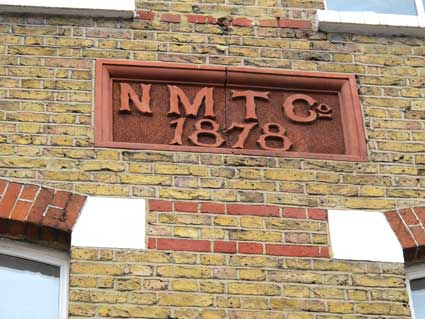 NMTCo. stands for North Metropolitan Tramways Company. This is the original dwelling house above the cart entrance. The site was built in 1878 as a forage warehouse for the company's horses. It was later used as a spice warehouse. Listed building information describes this as probably the most distinctive relic of 19th century horse tramway system of London. In 2012 expensive flats are behind it, overlooking the canal basin. 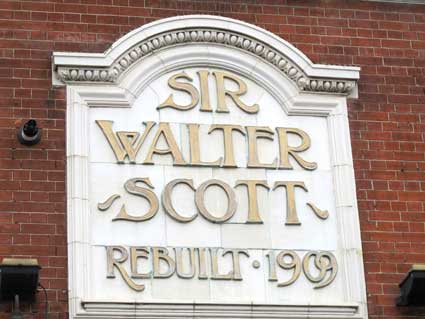 This large-scale plaque sits in the centre of a corner public house now called variously The Market Cafe or La Vie En Rose, Broadway Market alongside the Regent's Park Canal, Hackney. This pub was in existence by 1851 and was rebuilt in its present form in 1909.  It was tied to the Whitbread Brewery and closed in 1999 for conversion to restaurant use. Sir Walter Scott was a popular Scottish historical novelist, playwright, and poet who died in 1832. What strikes the observer is the flamboyant style of character form and spacing employed here: gold letters picked out against white stone with a curved pediment into which the 'Sir' securely fits. Serifs are stretched and curled; that uninhibited 'W' and the very high horizontal of the 'E' are striking along with the kern of the 'R' of 'Rebuilt' and the interlinking '0' and '9'. Wonderful. 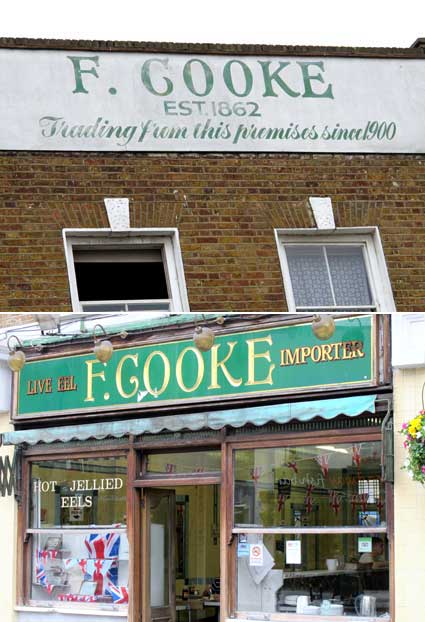 From the Waverley novels to jellied eels. Fred Cooke started selling jellied eels on Broadway Market in 1900. His restaurant served shepherds driving their flocks to the City of London. By the 2012 jubilee, Mr Cooke's grandson, clearly a patriot, continued the same trade from these premises.


Perhaps unique on this website, this piece of lettering (albeit modern, but on an historic vehicle) moves about. 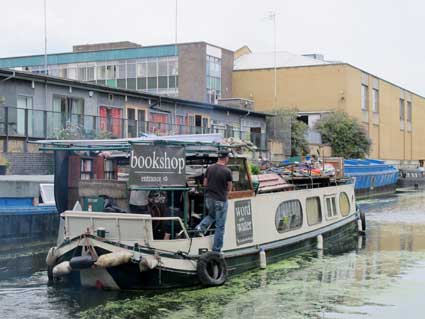 'bookshop
entrance>'
'words
on the
water
The London Bookbarge' 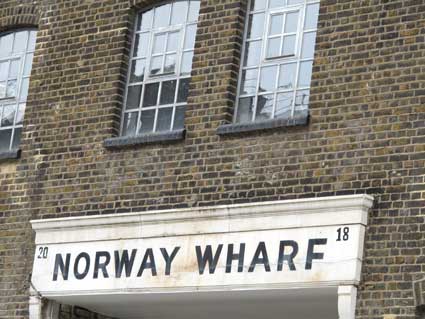 This lettering runs over an unpreposessing pair of gates in Hertford Road, N1. 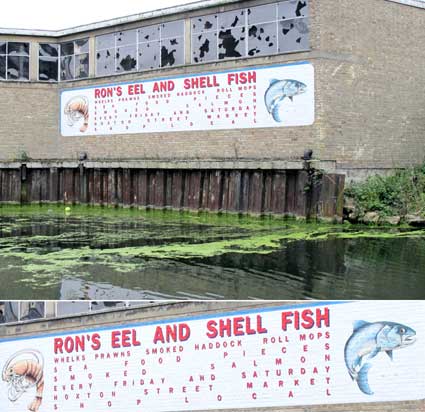 An advertisement for Ron's Eel and Shell Fish (definitely not 'shellfish') on the Hackney stretch of Regent's Canal. A triumph of inter-character and inter-word spacing which we feel here is justified (haw). 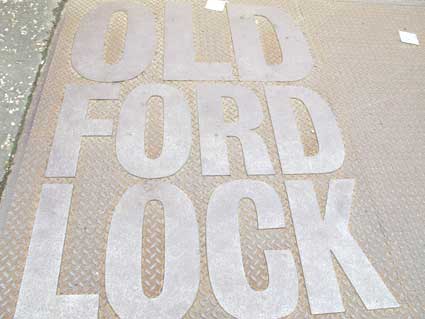 A footway plate in Hackney Wick. The helpful heritage information plaque nearby tells us that the Regent's Park Canal runs from Limehouse to join the Grand Junction Canal at Paddington and it opened in 1820. The area, Old Ford, is named after the natural ford which used to exist in the area crossing the uncanalised River Lea. Old Ford Lock marks the start of the Hackney Cut – an artificial channel built in the 18th century to cut off a large loop in the natural channel. The natural river rejoins the Navigation at this point. 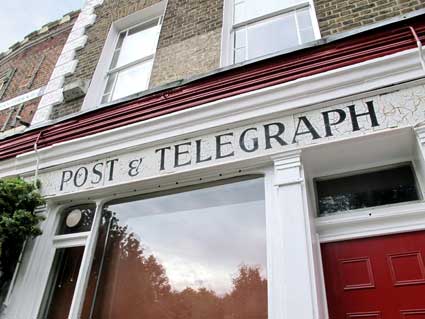 Seen over a former shop-front in Wansbeck Road, Hackney, E3 right by the elevated A12. We wonder if this is a now-defunct post office, as we can't trace a publication of this name. The phrase 'Post & Telegraph' was used to promote these neighborhood GPO offices. 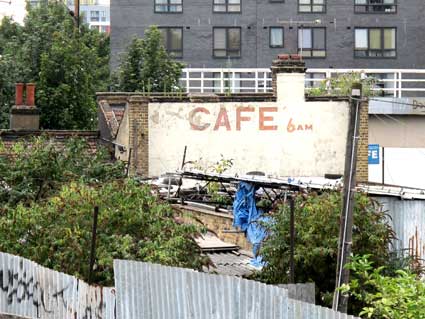 Our contributor: "The last image, behind Hackney Wick, gives I think a true picture of the rejuvenation of the East End, courtesy of LOCOG." It will be interesting to see if anyone recalls the meaning of this last acronym in years to come.