Anyone travelling from Wherstead Ostrich (more recently the Oyster Reach) to Shotley Gate may have noticed that they pass two 'Boots'. The most obvious is The Boot public house at Freston – sadly closed and boarded up since 20010 – the path across the road runs eventually to our local, magnificent folly Freston Tower which overlooks the River Orwell.  But miles later, past Woolverstone Village (close to Woolverstone Hall and, oddly, the Royal Harwich Yacht Club), Chelmondiston and onwards, the road passes a second Boot. It is clearly named in raised capitals, painted black on a white cement cartouche facing the road. Our picture, taken from a position facing towards Ipswich shows a second, blank cartouche and the overhead spotlight just below the sofit which used to illuminate it. There is a smaller cartouche with traces of lettering on the opposite wall, facing towards Freston. We never saw the Boot in its role as a public house, but it reopened as a restaurant for many years. It has now reverted to a private dwelling. 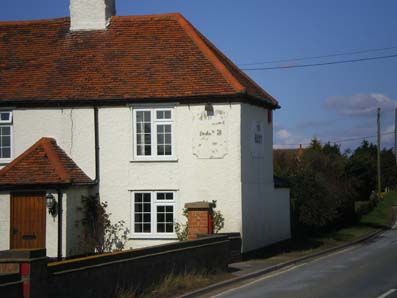 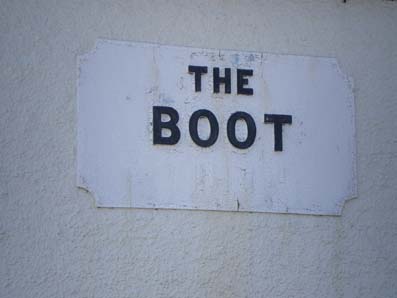 2009 images
The rather top heavy design of:

lettering is redolent of many old Tolly Cobbold pubs of yore. Given the smaller 'THE', surely the whole thing could have been moved down to occupy the centre of the cartouche. Perhaps the designer - if such a thing existed at Tolly Cobbold's brewery over the river - forgot that capitals don't have descenders (e.g. 'p' or 'q')? Or perhaps the word 'Inn' was originally intended below. 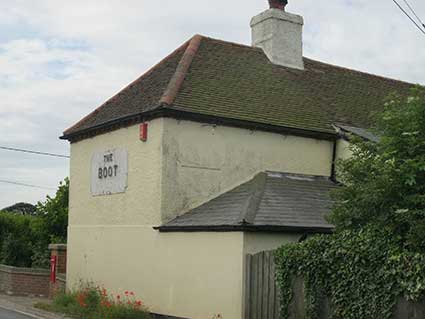 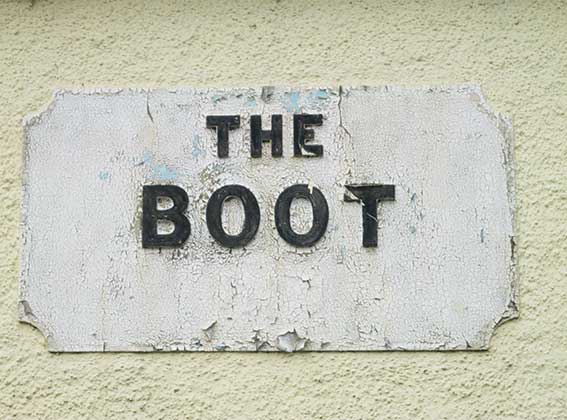 2016 images
The cartouche facing Shotley Gate (shown below) bears some damage at the top, presumably made by a broken light fitting dangling in the wind. Careful inspection shows the large characters 'TOLLY' with 'ALES AND STOUT' beneath. There may have been other letters at a later date, all subsequently whitewashed over. 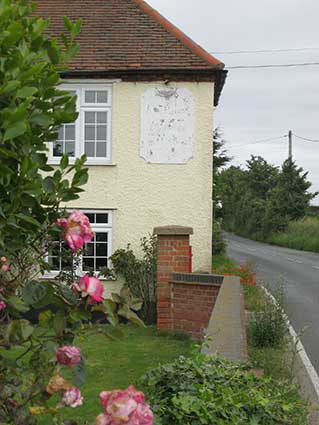 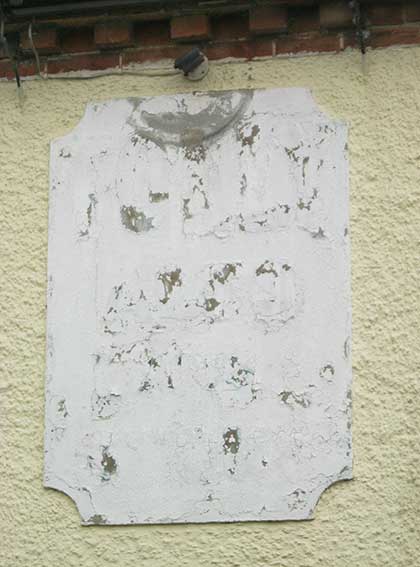 The cast iron signpost below lies not too far away from The Boot. If you turn right as you enter Chelmondiston and travel down to Harkstead church, the lane opposite will bring you very shortly to this small junction bearing the sign:

We're not aware of any other sign which uses this spelling of the small village which is customarily called 'Erwarton' these days. The home of 130 to 150 people, The parish of Erwarton lies between those of Harkstead, Shotley and the Stour estuary to the south. One of the smallest villages in the county stands shoulder-to-shoulder with one of the largest: Shotley. In 1870-72 John Marius Wilson's Imperial Gazetteer of England and Wales used a third spelling of 'Arwerton', which is a transliteration of the current name. Such is the curiosity of Suffolk nomenclatures; this why we include the signpost below. 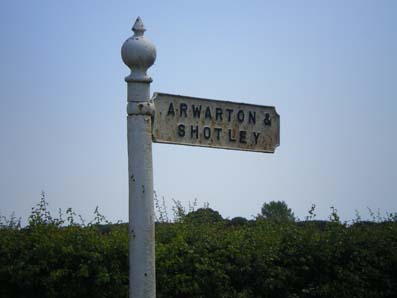 2009 image
The Suffolk CAMRA site (see Links) tells us:-
Erwarton is a small hamlet on the River Stour where legend has it that the heart of Anne Boleyn, second wife of Henry VIII, is buried in the church.*** It was recorded in Domesday as "Eurewardestuna" and "Alwartuna". A local jetty was once supposedly used to import horse manure from various local towns to fertilise the nearby fields and may have resulted in some local coin finds. The current Ewarton Hall was rebuilt in 1575 and partly re-built in 1858. The gatehouse (c. 1549-1575) is said to be one of the most imposing in the region... The parish name is Arwarton, which reflects an older name for the village; on John Speed's 1610 map it appears as "Arwerton". See also John Speed's map of Ipswich.
[***technically this means that Erwarton is a village, only settlements with no church are 'hamlets'.] 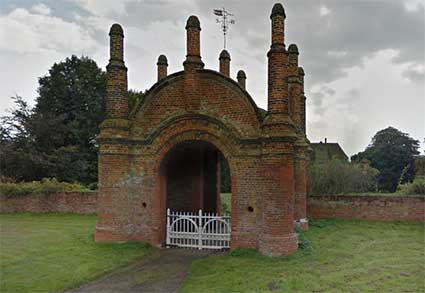 Erwarton gatehouse, the Hall behind it
Not far from Erwarton Hall is this intriguing tablet set into the wall (and hiding under the gutter) of an old building next to the road. It is known as Parker Long House  and was originally three almshouses. 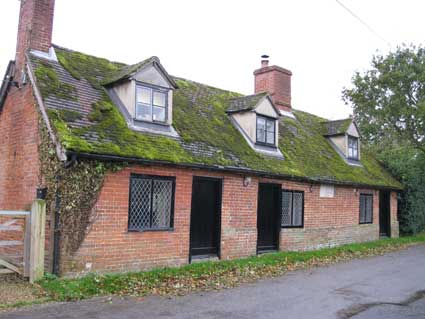 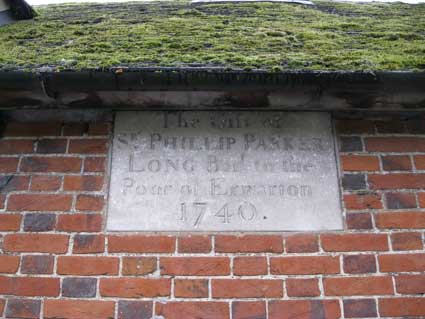 Sir Philip Parker-a-Morley-Long, 3rd Baronet (1682 – 20 January 1741) was an English politician. Born at Arwarton, Suffolk, the son of Sir Philip Parker, 2nd Baronet, and Mary Fortrey, he took the name of Long on inheriting the estate of Whaddon in Wiltshire from his cousin Sir Walter Long. The original Coat of Long was, through some error, allowed to him by the College of Arms. This would explain the use of the word 'Long' in the inscription; 'Bar'.' refers to 'Baronet'.
He served as Member of Parliament (MP) for Harwich 1715–1734. On 20 January 1741, John Perceval, 1st Earl of Egmont wrote in his diary: "This morning died my brother-in-law Sir Philip Parker, at 3 o'clock, choked by one of those fits he has had for 12 weeks past at sundry times."
He succeeded his father and grandfather of the same name: res[ectively, Sir Philip Parker, 1st Baronet (c. 1625–1690) and Sir Philip Parker, 2nd Baronet (c. 1650–c. 1698).