London - and many of our long-established cities - boasts too many examples of historic lettering to encompass on this site. However, a brief visit to Soho in September 2011 revealed the hidden:

which stands just off Wardour Street in Hollen Street at the rear of premises fronting Oxford Street. Redolent of a period when a hat was such an essential part of the attire of men, women and children that large factories in the centre of town produced them in abundance. 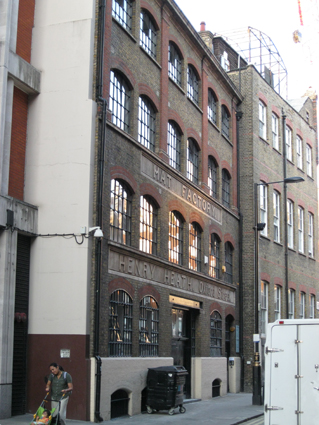 The 'Hat Factory' lettering in the panel above the first storey is composed of a decorative capital font with the curving 'V' in the 'H' and 'A'. 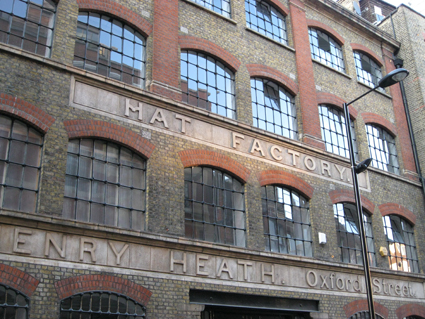 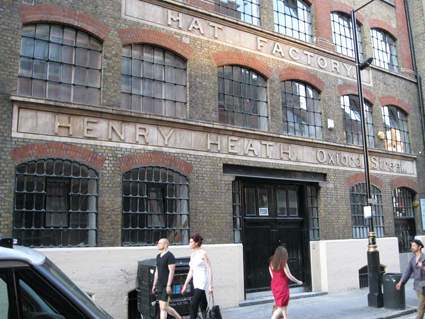 One writer observes: "A fairly ordinary building of the 1880s is enlivened with this lovely lettering. It’s as if the maker of the letter forms put in just that bit of extra effort into the design, just as the hatters inside wanted us to know that they would take similar pains with a homburg or a trilby. It’s good to see such care lavished on a relatively modest building in an obscure side street."

On the same block and just round the corner from the Hat Factory is:

displayed in individual terra cotta panels between the first and second storey white framed windows. The very decorative font used expands and contracts to fill the available standard spacing of each panel (the outer panels are much narrower, carrying decoration, to reflect the narrower windows above and below). The words 'Saint' and 'Soho' are extended with motifs at beginning and end of the words, while 'Schools' is condensed and 'Patrick's' even more so. This building has been exposed by one of the many Crossrail workings in the centre of London (autumn 2011) which has seen clearances of some buildings. The lettered face was photographed from behind shuttering at the other side of the buiding site. 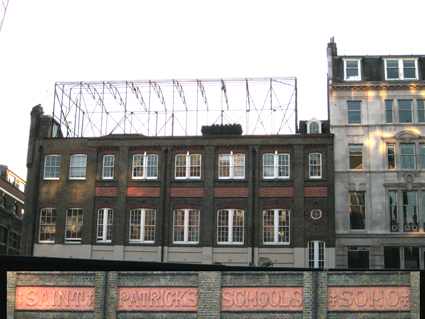 Round the corner on the south side of Oxford Street we find a fine Italianate corner tower (with finials) bearing the legend:

picked out in dark red, condensed, sans serif caps centred on a cartouche against the recently cream painted stucco. Another few doors along and above the garish shop fronts - many with their own narrow, individual architectural stylings above - is the date '1900' picked out boldly in white against the red brick of a decorative gable.