Blandford Forum is a market town in Dorset, sited by the River Stour about 13 miles northwest of Poole. If one digs a little into its history, one word dominates the story of Blandford: 'fire'. The majority of the (mainly medieval) town was destroyed by a fire in 1731. The rebuilding work was assisted by an Act of Parliament and a donation by King George II. The rebuilt town centre—to designs by local architects, entrepreneurs and politicians, John and William Bastard (pronounced b'stard)—has survived to the present day largely intact. Blandford is therefore an unusual example of rural Georgian architecture. Blandford is based on an Anglo-Saxon fording point of the River Stour; it was recorded as Blaen-y-ford and as Blaneford in the Domesday Book. The Latin word Forum, meaning market, was recorded in 1540.

The Church of St Peter and St Paul 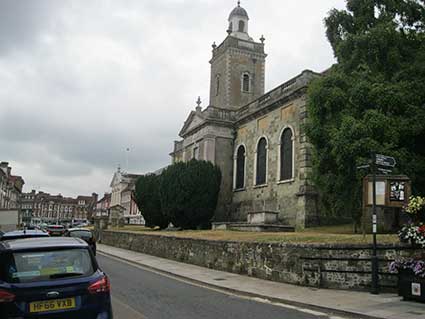 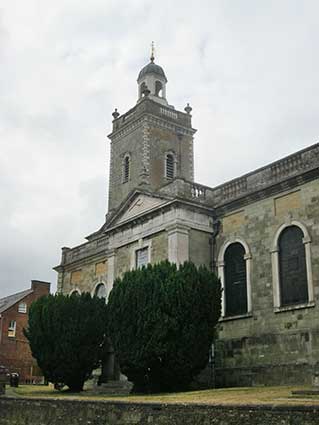 2018 images
Listed Grade I. Listing text: 'Parish church. Re-built after fire, 1732-1739. Designed by John and William Bastard, the original design incorporating a spire. Greenish local stone with Portland stone dressings. Interior has Ionic colonnade. West gallery 1794. Side galleries 1836-7. Chancel extended 1896, the original apse being re-built further East. Monuments*. The Church is part of a greater group formed by buildings in Market Place, East Street and West Street.'
[* Monuments include an obelisk in the churchyard: Monument to the Bastard Brothers (Listed Grade II).]
The church stands at the east end of the Market Place, on the site of the mediaeval church which perished in the fire of 1731. Designed and built by Bastard brothers, the new church was opened in 1739 although work went on for several years after that date. The church has walls of Greensand ashlar with dressings of Portland and Ham Hill stone. The original design comprised Apse, Nave, North and South Aisles, and a West Tower. The last was originally intended to have a spire but a wooden bell turret was substituted, much to the Bastards' displeasure. This is a notable example of Georgian church architecture in the classical style, as interpreted by provincial builder-architects.

The Fire Monument / The Pump House
Listed Grade I. Listing text: 'Built against Churchyard wall. Dated 1760. An inscription explains that it was erected by John Bastard in memory of the fire of 1731. It consists of a pedimented canopy supported on Roman Doric columns, and is an example of the Bastards' later and more severely classical style. The entablature has triglyphs and other classical detail. Portland stone. In 1897 a fountain was substituted for the pump.' 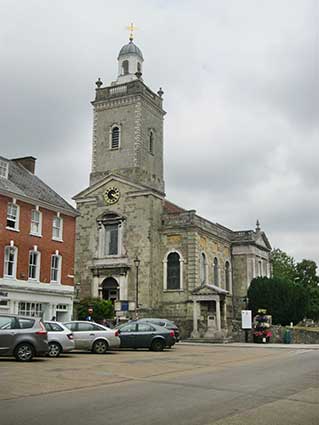 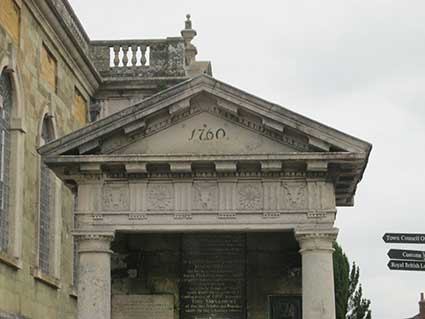 The interior has a feast of inscriptions (some not too easy to decipher):

‘1768
JOHN BASTARD gave to the Bailiff and Burgesses of this Town 600 pounds
in trust that the Interest of 500 pounds be laid out every Year in teaching
Boys and Girls to read and to buy proper Book And that the interest of
the other 150[?] pounds be laid out in keeping their Pump in repair and
supplying the Lamp with Oil and a Man to light the same every Night from
Michaelmas to Lady Day for ever.’

‘In REMEMBRANCE
God’s dreadful Visitation by FIRE
which broke out the 4th June 1731,
and in few Hours reduced, not only the
CHURCH and almost this whole Town to Ashes
wherein 74 Inhabitants perished,
but also two adjacent Villages
And
In grateful Acknowledgement of the
DIVINE MERCY,
that has since raised this Town,
like the PHAENIX from it’s Ashes
to its present beautiful and flourishing State,
And to prevent
by a timely Supply of Water
(with God’s Blessing) the fatal
Consequences of FIRE hereafter
THIS MONUMENT,
of the dire Disaster and Provision
against the like, is humbly erected;
by
JOHN BASTARD,
a considerable Sharer
in the general Calamity.
1760.’ 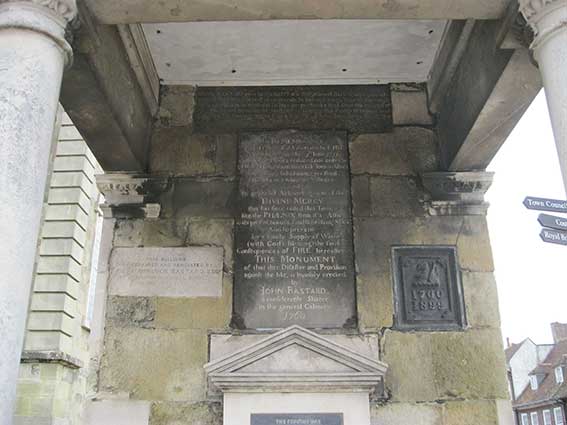 ‘THIS BUILDING
WAS REPAIRED AND RENOVATED BY
THOMAS HORLOCK BASTARD ESQR.
[FROM] CHARLTON MARSHALL DORSET
IN THE YEAR 1858.’

Thomas Horlock Bastard (1796-1898) was the great grandson of Thomas Bastard of Blandford whose brothers were responsible for much of the rebuilding.
And in a metal plaque beneath a phoenix: 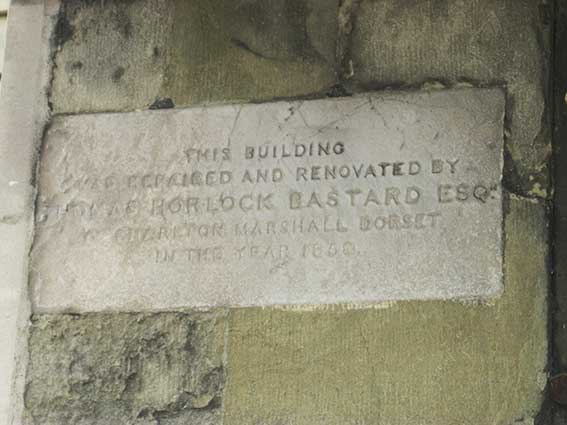 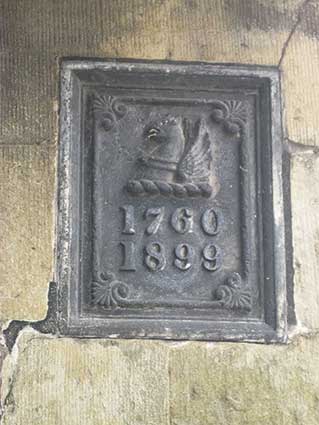 The completion of the rebuilding programme by the Bastard brothers was commemorated by the erection of The Fire Monument. 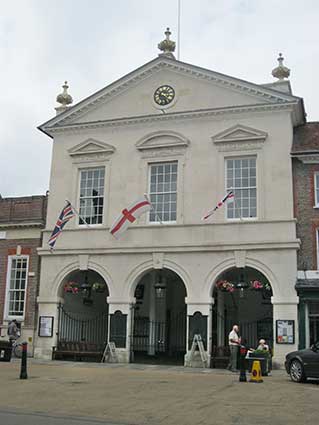 Listed Grade I. Listing text: 'Portland stone ashlar front. Signed "Bastard, Architect" and dated 1734. Frieze. 2 storey 3 window front, enriched cornice and pediment. Draped stone vases to pediment and quoin parapets. Clock in tympanum. The three lst floor windows have moulded architraves, enriched pulvinated friezes, and pediments, the central one being segmental. Moulded strings. The ground floor has 3 semi-circular arches with moulded imposts and archivolts leading to open portico, formerly a market. The front room on the Ist floor has some original fittings and also portraits of the Bastards. Behind is a mid-Victorian Corn Exchange with interesting elliptical roof-trusses. Gates to semi-circular arches in portico.'
Standing on the north side of the Market Place, the Town Hall is signed and dated:

in the entablature of the central window: 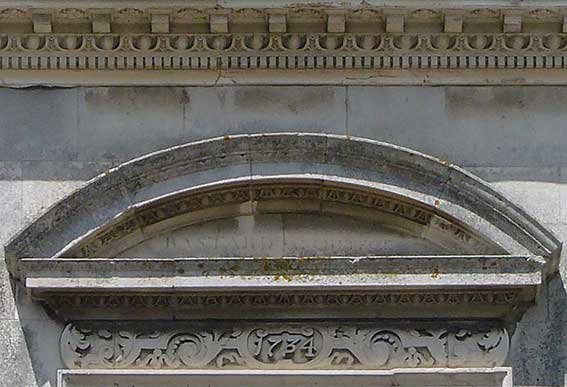 Photo courtesy Allan Soedring
The above photograph of this difficult-to-see lettering is taken from the Astoft website (© Allan Soedring) to whom our thanks.
This building replaced the former Town Hall, destroyed by the fire of 1731, which stood on an island site to the south of the present building. The Town Hall comprises a Courtroom, Council Chamber and a Theatre. 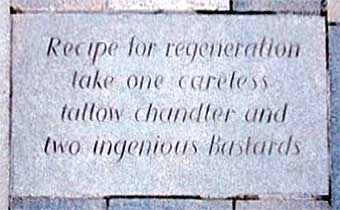 In front of the Town Hall, a recent piece of lettering carved in a Purbeck paving stone:

This was the work of the Blandford Poetry Group for the millennium. The only possible criticism of this inscription is that it reinforces the erroneous pronounciation of the brothers' surname (rather than the correct b'stard). It is quite amusing, though. 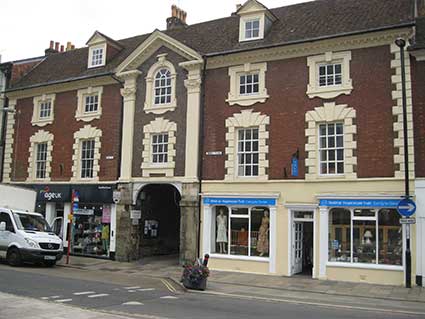 Listed Grade I. Listing text: 'With No 73 East Street similar in general arrangement to Nos 18 and 20. Architects the Bastards of Blandford, the easternmost part of the building formerly the architects' own house. 3-storey 5-window front, stone ground floor, red brick with stone dressings above. Similar central feature to the other example except that the yard entry has arched head. The pilaster caps have in-turning volutes and are similar to but not identical with those to Nos 18 and 20. The heavily enriched modillion cornice is also similar but not identical. The central 2nd floor window is round headed with moulded archivolt and foliated keystone. The other 2nd floor windows have eared architraves and shaped aprons. 1st floor windows have rusticated quoins and voussoirs. 2 pedimented dormers. Shop fronts are suitable in scale, that to No 73 East Street. (Electricity House) being modern, and that to No 26 being C19 with panelled pilasters. Behind ground floor showroom in No 73, a room with panelling and plaster ceiling; the study of John Bastard. See The Bastards of Blandford by John Adams, Architectural Review, June 1968.'

The street nameplates are 'EAST ST.' to the left and 'MARKET PLACE' to the right, either side of the carriage entrance ('BERES YARD') – the last's derivation is not known; perhaps a local family name?

Listed Grade II. Listing text: 'Post 1731. 3-storey 5-window front, brickwork of usual type. Moulded brick dentil cornice. Parapet. Sash windows with keystones. Very good early C19 shop-front with half-round fluted Corinthian pilasters, enriched cornice and paterae to frieze. Plate glass window has been inserted on right of front, smaller shop window on left. Central doorway is round-headed with enriched archivolt and foliated keystone. Conyer's Filling Station (Listed Grade II), and Nos 1 to 7 (odd) form a group with the listed buildings in Market Square and Nos 1 to 11 (odd) and Crown and Anchor Public House form a group.'
Conyers has been trading in Blandford Forum since 1886 and constitutes the oldest surviving shop in the town. Guns, fishing equipment, country outfitters, a petrol station, pottery parties – that's diversification for you.
The business did so well that it spread to the next-door premises. Just off to the left of the photograph is the entry to Conyer's Filling Station (mentioned in the Listing). Above the shop front of no. 5 West Street is the sign in mirrored gold lettering on a black background:

Above the first floor windows of no. 3 is the prominent sign: 'CONYERS' in curved section condensed capitals (painted dark maroon) on a cream board.