Hay-On-Wye has become famous for 'that town which is one big second-hand bookshop'. It is located on the Welsh / English border, so much so that most of the town lies within Wales, but eastern parts do encroach into England. The town is, nonetheless, considered to be in Wales as indicated by the bilingual road signs. Boasting the remains of two Norman castles - similar to nearby Builth Wells - the history of the town predates the Conquest.

Strolling around on a hot sunny day during the 2011 Hay Festival we came across a couple of lettering examples. 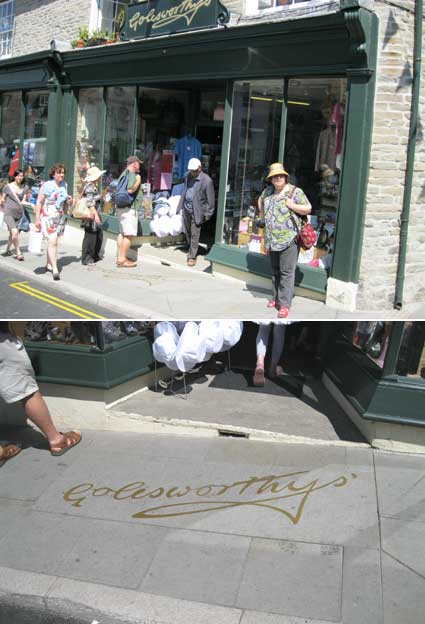 F.W. Golesworthy's on Broad Street still trades as a camping and hunting/fishing shop. Established in 1877, this traditional country store is still run by the founding family supplying clothing, footwear and other useful products from tent pegs to maps. This brass signature cut into the threshold paving may be unique. It must have been an expensive piece of branding. The placing of the possessive apostrophe after the last 's' is intriguing. 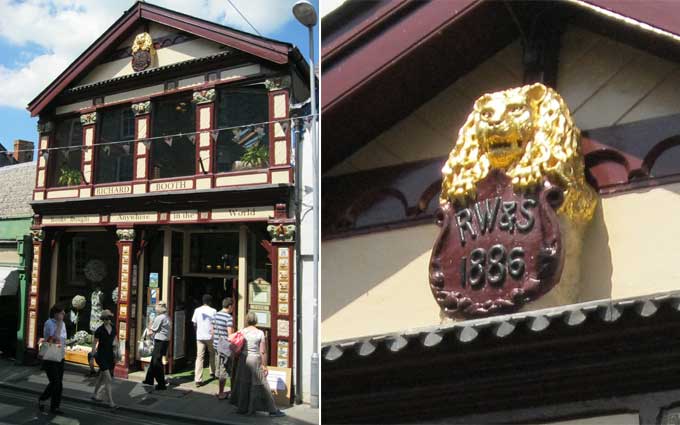 Richard George William Pitt Booth lives in Hay Castle and is credited with transforming the town into a global attraction for second-hand book lovers.
Richard Booth's family have lived in the Hay area for more than a hundred years. Coming from a military family, Richard Booth was born in Plymouth and attended Rugby school and Oxford University. After graduating, he decided to return to his Mid-Wales roots. Mr Booth, the self-styled 'King of Hay' was sometimes a controversial figure. He died on 20 August, 2019.

In 1961, he opened his first second-hand bookshop in Hay, shipping in hundreds of books from across the globe. Booth was convinced that a town full of book stores could become an international attraction - "you buy books from all over the world and your customers come from all over the world". At 44 Lion Street the company has reused premises with a fine frontage with its mouldings, ceramics and cast iron detailing. They describe it as: 'an elegant façade with its glazed animalier tiles'. The building is Listed Grade II. Most striking is the golden lion's head at the top with its claws grasping a shield bearing the characters:

[UPDATE 15.9.2019: Antony May informs us: 'Richard Booth's Bookshop building was an Agricultural Hall'; further digging reveals that the hall was originally built by Robert Williams & Son (hence 'RW&S'). Anthony nudges us that Richard Booth's father wasn't a garage mechanic, as we had said (don't believe everything you read on the internet), but a distinguished army officer. He is also an admirer of the Golesworthy shop. Thanks for getting in touch, Antony. We further  read: 'In August 2005, Richard Booth announced that he was selling his Hay bookshop... The bookshop is now under ownership of Elizabeth Haycox and has had extensive refurbishment works carried out since 2009.']