This is one of the most enigmatic of the trade lettering examples we've come accross (in Ipswich or elsewhere).
How best to advertise a product? Get your message in front of the passers-by by painting it in huge letters on a well-sited wall at ninety degrees to the road (presumably with a nice fee from NestlÈs). How best to destroy the effect? Build a new house in front of it! 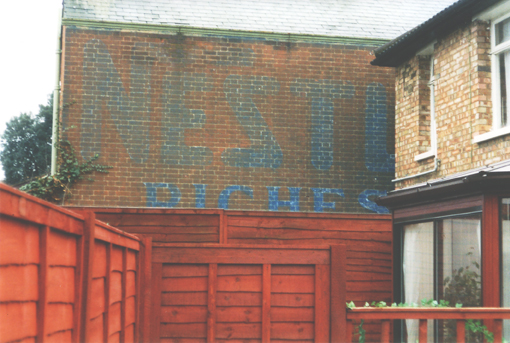 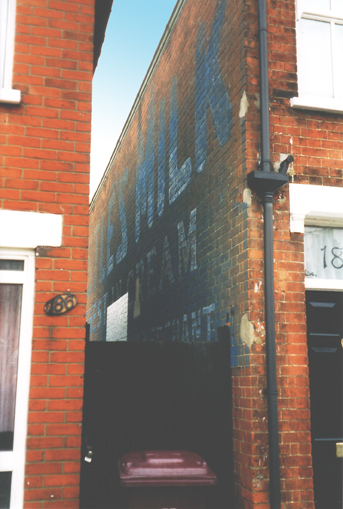 These 2003 colour pictures (above) show 1. the lettering masked by newly installed fencing panels; 2. the view over the alleyway gate
and 3 below, from a higher viewpoint (and minus red fencing).
3> 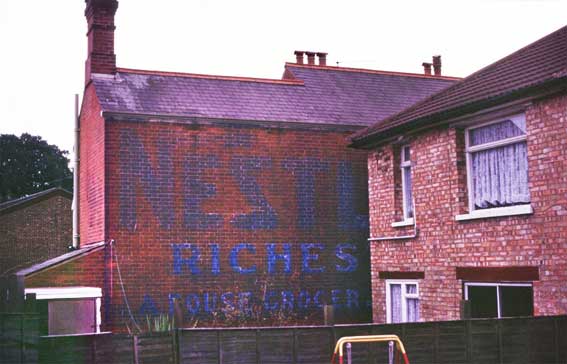 Here we are at 184 Bramford Road (date plaque on front elevation: 1879); photos 1 and 3 from round the corner in Windsor Road: the north wall displays the first part of the advert which in its entirety seems much bigger than the actual shop frontage must have been (see photograph 3). Number 186 Bramford Road (to the right in the photo 3) was built in the 1920s or 1930s. Before that the 'Nestles' sign would have been very visible to those approaching Ipswich down Bramford Road; now it's a tucked away curiosity. Thanks to the Ipswich Society's excellent Flickr collection (see Links) of period photographs for image 3. 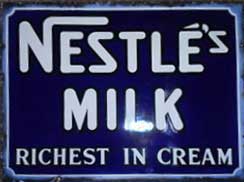 The sign writer (who has made rather a good job of reproducing the trade mark of the NestlÈ company, with elongated horizontal tailing off to the right from the upright of the larger 'N', also the 'backward 'Z' for each letter 'S') may or may not have included a possessive apostrophe (which so often superfluously appears in signs), and the accute accent over the second 'E' of the company name. This could having something to do with the fact that in more innocent times shoppers always called the brand by the cosier pronunciation: 'Nestles' rather than 'Ness-lays' (similarly 'Trebor' as in Trevor - instead of the correct 'Tree-bore' and Selotape as in 'Sell-o-tape' rather than the strictly correct 'Seal-o-tape').

Sadly, the whole area of brick wall has been covered with a blue paint layer - an odd choice - to reduce the original glaring white of the letters, perhaps. A similar fate has befallen the NestlÈ sign in Bury St Edmunds: another large shop sign now covered in green paint!

[UPDATE:  Guestbook message/email dated April 4, 2006 from Rob Hudson (to whom our thanks):-
"Amazed to see the pictures of 184 Bramford Road. I lived there when it was a shop from the 60s to the 80s. On the other wall facing towards Ipswich my father put the letters ROOKES vertically. This was what the locals called 'the shop' which was founded by my grandparents, the Rookes. After setting up a greengorocery handbarrow after the First World War, my Grandfather opened a shop  near the bottom of what was then Sallows Lane at 176 Bramford Road.  The shop passed on to my parents after his death in the Sixties.  My parents were forced to move out in the early 60's when the Council made a compulsory purchase.  They moved the few yards up the road to 184 buying the business from Mr. Bowman where they stayed till the 80's.
The shop was well known for its fruit and veg display on the forecourt.  Though my parents were called Hudson, the shop was always  Rooke's Stores to the local customers, or Rookies. After my parents retired from what was a successful business, the shop went downhill under the new owners.  Shortly afterwards it was converted into a residential property only.
That sign on the wall, obscured by the new building always fascinated me and I was amazed to see it on your site.  I had completely forgotten about it till then.
Thanks! Rob Hudson"]

Interestingly NestlÈ, a Swiss dairy product company, was started in the mid-1860s when Henri NestlÈ, a trained pharmacist, began experimenting with various combinations of cow's milk, wheat flour and sugar in an attempt to develop an alternative source of infant nutrition for mothers who were unable to breast feed. His ultimate goal was to help combat the problem of infant mortality due to malnutrition. He called the new product Farine LactÈe Henri NestlÈ. In recent decades, the global role of the company has been the subject of much controversy, boycott and opposition as impoverished communities – particularly in Africa – have been the subject of aggressive marketing of their baby milk products.

You can see another colour photograph and commentary on this advertisement on Ed Broom's freston.net website listed here. (You need to find the entry for 4.8.03: 'Writing on the Wall') 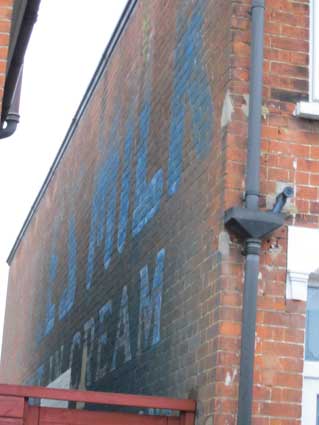