'I thought you might like to see this sign that I saw on a wall in Salisbury recently. Not sure how old it is. Maureen Galvani' [Fellow member of Ipswich's Freelance group, Mo Galvani sent in these wonderful photographs in August 2015.] 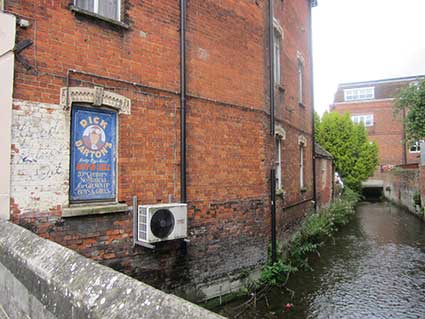 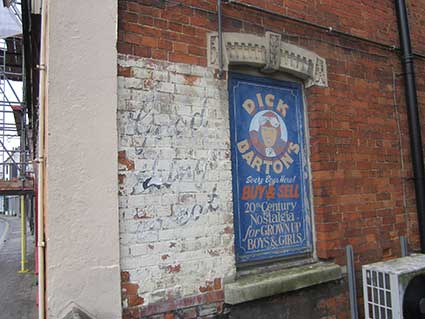 2015 images
Borin Van Loon takes a keen interest in 'Every Boy's Hero': Dick Barton because of his own creation Bart Dickon as featured in his graphic novel The Bart Dickon Omnibus (available at a very reasonable price on his website, folks!)

Dick Barton – Special Agent was a popular radio thriller serial broadcast in the BBC Light Programme between 7 October 1946 and 30 March 1951. It was aired in 15-minute episodes at 6.45 (later 6.15) each weekday evening. From 11 January 1947 an additional "omnibus" edition* repeated all of the week's programmes each Saturday morning between 11.00 and 12.00. In all, 711 episodes were produced and the serial achieved a peak audience of 15 million. Its end was marked by a leading article in The Times. The serial followed the adventures of ex-Commando Captain Richard Barton MC (played by Noel Johnson, later Duncan Carse and Gordon Davies) who, with his mates Jock Anderson (Alex McCrindle) and Snowy White (John Mann) solved all sorts of crimes, escaped from dangerous situations and saved the nation from disaster time and again.

Beginning in 1948, the Hammer film company made three Dick Barton films and, long after the radio series had been replaced by The Archers, Southern Television made a televised version in 1979. Dick Barton has also been adapted into a tongue-in-cheek stage play and a spoof radio comedy. Each version has featured the original's memorable signature tune, The Devil's Galop by Charles Williams. Oddly, in the late 1960s, legendary DJ and Suffolk resident John Peel played a piano-heavy version of the theme tune by the Beer & Bread Band on his Radio 1 'Top Gear' programme; we only recently learned that this was played by the pre-fame Elton John... the intenet is sometimes a wonderful thing. You can listen to the 7" single of The Devil's Galop by clicking the link. The single labe doubles the 'l' in Galop; a Galop is a dance reminiscent of the running gait of a horse, a gallop – one for the pedants...

The series was devised by producer Norman Collins. The scripts were written by Edward J. Mason and Geoffrey Webb and, listened to in the 21st century can seem very hackneyed and cliché, almost to the point of parody. It gave rise to a popular catchphrase of the late 1940s "With one bound Dick was free!" which made light of the fact that no matter how dangerous the cliff-hanging situation Dick found himself in every evening, he would always escape by the easiest – and usually most contrived – method.

In 1951 The Archers was first broadcast at 11.45 am on the BBC Light Programme (later reconstituted into the still extant BBC Radio 2). The Archers was never as popular as Dick and his friends, but conservative forces within the BBC (led by drama head Val Gielgud) had never felt comfortable with Barton's sensationalism. The Archers was viewed as far more 'suitable' fare for post-war Britain and it was allowed to take over Dick's slot at Easter 1951. When Jock Gallagher became head of the Midland Region of BBC Radio in the early 1970s, he said that he had always hated The Archers because it killed off his boyhood hero, Dick Barton. The notion that The Archers killed Dick Barton is too firmly ingrained in the psyche ever to be shaken off.
[So nice to know that the original hero had an 'omnibus', too.] 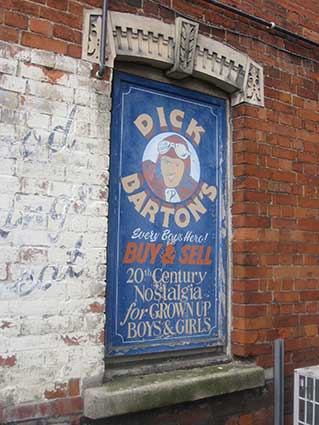 Pictured here on this remarkable advertisement, which fills a rather decorative window aperture over a canal, the hero resembles a modern-day Biggles in flying helmet, goggles and white scarf. 'Biggles' (James Bigglesworth) first appeared in the story The White Fokker written by Capt. W.E. Johns (1893–1968), published in the first issue of Popular Flying magazine, in 1932.

Here's a blipfoto caption by another spotter of obscurities:
'Special Agent Lives On. Capt. Dick Barton, Special Agent, lives on with this add board along Fisherton St in Salisbury. The shop once sold boys/girls hobbies and toys, must have closed forty years ago but the board remains... A bygone age no doubt but continues to keep a presence on this window frame for all to see.'

Nostalgia isn't what it used to be.

It is particularly nice to see this sign alongside the painted-over:

sign in an angled, cursive script; dark blue, probably on a white panel, later obliterated with white. This looks as if it refers to an earlier business at the same premises: 92-94 Fisherton Street, Salisbury, Wiltshire. 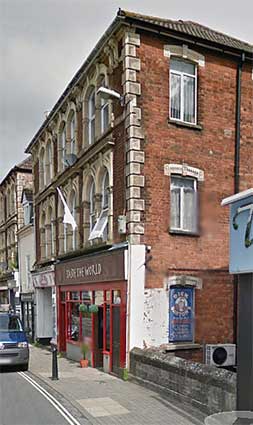 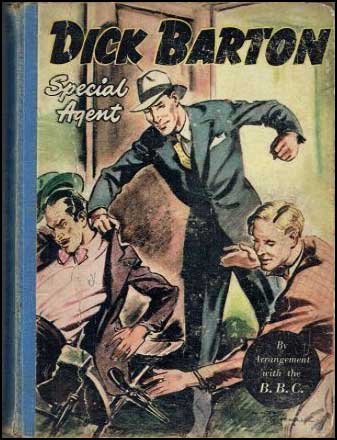 Above right: Borin Van Loon bought this book ('published by arrangement with the B.B.C.') from the Montacute TV, Radio & Toy Museum in Somerset some years ago. Couldn't resisit it. On reading through, it is surprising how violent the derring-do is in a children's book in the 1940s, particularly relating to the B.B.C.'s output. Perhaps the printed stories had more license for fists, guns and brutality.

While checking the location on StreetView, we noticed this remarkable shop front, also in Fisherton Street: 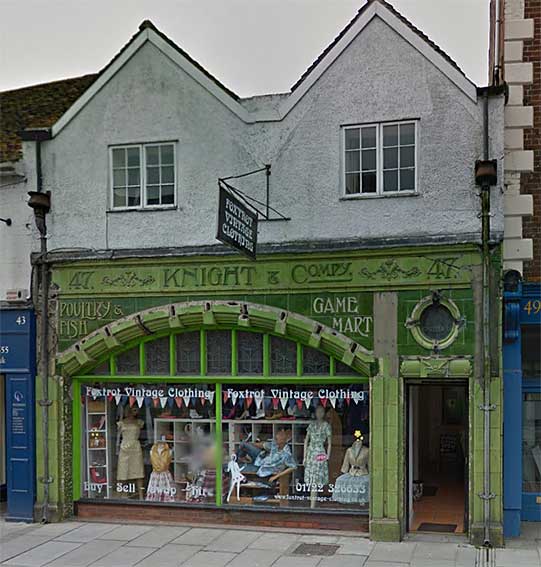 in art nouveau letterforms, all rendered in coloured ceramic tiling over an arched window.