See the photographs of the Saxmundham to Aldeburgh branch line stations.

Saxmundham has maintained its position as quite an important town in eastern Suffolk with its rail station, market and its position for many years on the arterial road to Yarmouth, the A12. Now by-passed to avoid its infamous bottleneck of ancient buildings, it retains several notable examples of lettering on its walls. 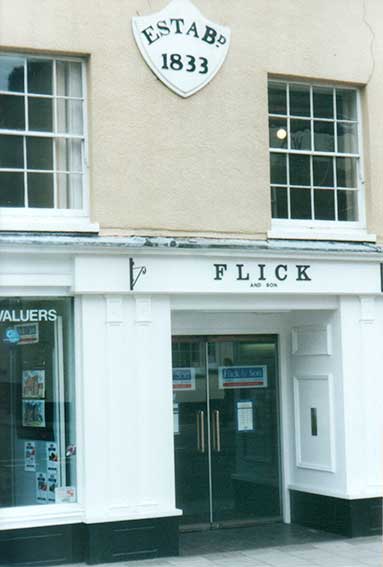 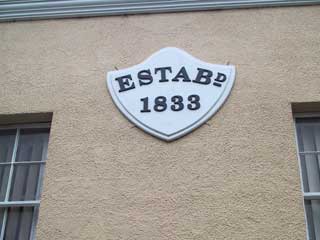 2006, photo courtesy Andrew Smith
Flick & Sons, estate agents once bore an impressive rounded-topped relief shield: 'ESTABD. 1833' with the 'B' bold in relation to the roman remainder. Unfortunately (as shown in the second image) in 2006 the shield was replaced with a (possibly plastic) version with much more regular characters. This is Ashford House in High Street and it's a curiosity only because it eschews the numbering system: the 'Gibbs' step (see below) is at no. 26 and on the other side of Flick's offices are 26a, then 28.
From the Saxmundham Town Council website (see Links): 'In the early part of the 19th century, the jeweller and clockmaker Jerome Bright occupied Ashford House and it is here that his son Henry Bright, the painter, is said to have been born in 1810. In about 1840, two of Jerome Bright's daughters married Isaac and James Ashford who took over the premises and set up their antiques and furniture making business. The remainder of the Bright family moved to Park Lodge in South Entrance. The Ashford family traded there until the 1980s. Flick & Son estate agents and auctioneers moved to Ashford House in 1983 having been established in the town for 150 years prior to this.'

Flick & Sons stands opposite the Bell Hotel with its long cartouche bearing its name and the town in serif caps, in 200 so weathered that the signwriters font outlines alone preserve much of the characters towards the right. We wonder if the two white trapezium shapes between first floor windows cover up earlier lettering? 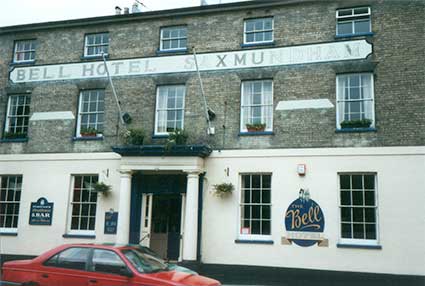 2001
And below is Andrew Smith's image of the hotel after a facelift in 2004. The 'trapeziums' now have their pair of tails restored and more resemble scrolls, once possibly carrying lettering such as "Wines & Ales" and "Good Food"?

2004
Below: the Bell Hotel in summer 2015 – they have ‘boutiqued’ it (brown walls on the lower story), but the main Bell Hotel lettering is the same. 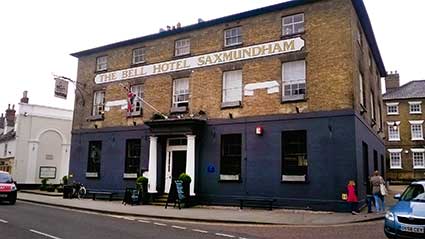 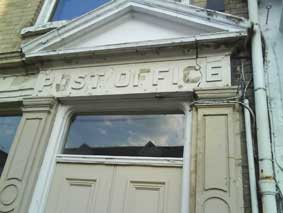 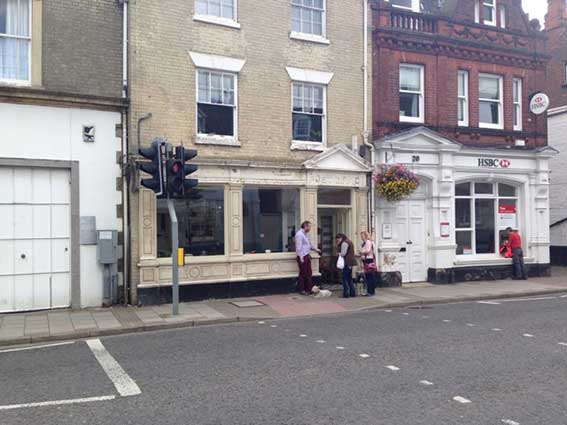 2014
Above: the old Post Office at 22 High Street, Saxmundham with the raised lettering in a very poor state. 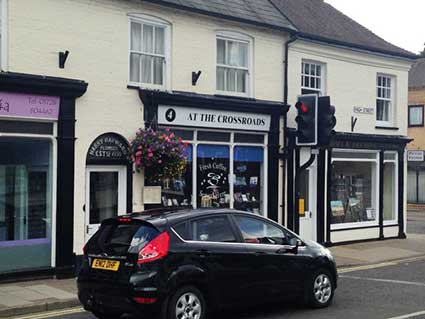 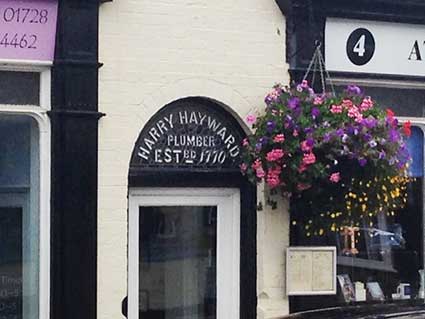 And right on the road's bottleneck, next to the old Post Office is a business of the sort becoming much rarer in the bigger towns where huge B&Q citadels stand with superstores as gateways to the conurbations:
'W. WELLS & SON
IRONMONGERS.'
[UPDATE 15.4.2011: Andrew Smith reports that this is now "The Store" clothes shop: they have restored the whole shop and repainted the new shop name in similar brown capitals.  And the Ransomes plaque is still there.]

2001
On the wall facing the road, a cast iron plate boasting the company's dealership in the region's famous cast iron products:
'RANSOMES' PATENT PLOUGHS AND IRONS SOLD HERE'. When was the last time a customer came into the shop demanding these? It's also worth indulging in a bit of pedantry concerning that misplaced apostrophe: shouldn't it be "Ransome's" as it was the firm founded by Robert Ransome? One assumes that, as with "Woolworths", "Sainsburys" and "Tescos", such large company names are colloquialised as a sort of possessive plural, so the possessive apostrophe below follows "Ransomes". The local history resource for this company at University of Reading uses this form. See our Ransomes page for the only trace of the name on a building near the former huge riverside foundry in Ipswich. 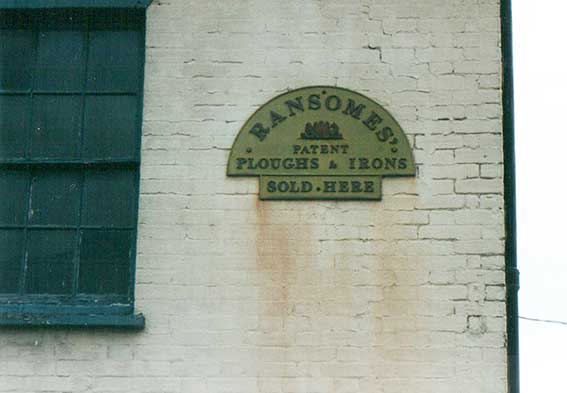 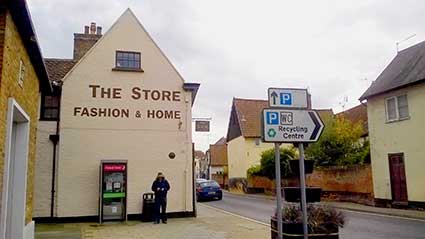 2015
At right: 'The Store' in 2015, which was W. Wells & Son ironmongery shop – they have rather nicely emulated the old lettering. There is only one 'phone box now.
At the front of this shop we find raised or repoussé lettering:

The first two in an art nouveau relief frame with a font to match. 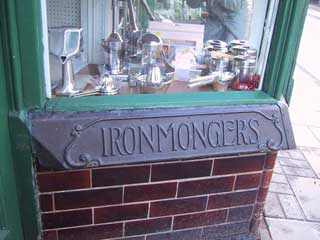 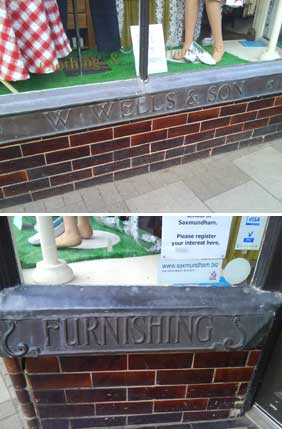 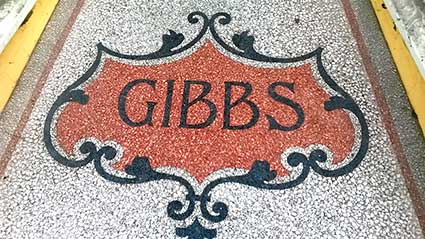 2015
This striking 'Gibbs' mosaic is in the doorway of what was most recently The Cotton Tree interior design shop, 26 High Street; before them it was empty for many years. And before that it was Martins’ outfitters (in the 1980s/early 90s). 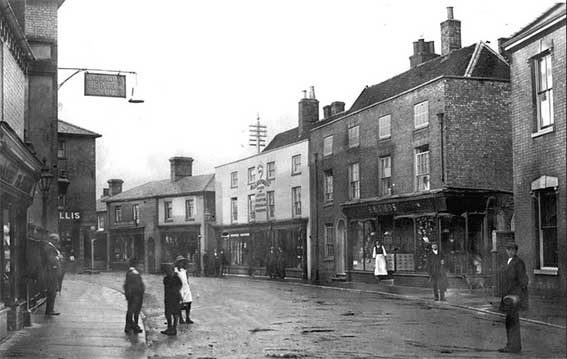 Photo courtesy David Kindred
David Kindred's seemingly inexhaustible supply of period photographs (see 'Kindred Spirit' on our Links page) yields this view of High Street in around 1900. The 'pinch' in the main road is clearly seen in the left background. Flick's dated shield can be seen in the centre and the nearer shop, no. 26, shows Mr Silas Gibbs in white apron outside his named premises.
[UPDATE 1.11.2015: "The old photo of the High Street is great – I must point out the railings in front of the Market Hall where the gent is standing, and the shop on the extreme left is H.G. Crisp which of course is still there but not run by Mr Crisp. I further note the Bell on the hotel sign hanging quite far into the road, and the ‘LLIS’ just showing on the shop near what you describe as the ‘pinch’. This had been a Lloyds bank more recently with a more substantial stone facing which no doubt you’ve examined – there was some nice lettering on the cornice which was removed so now you can only see an outline.
The shop where the dated shield is situated is called Ashford House which became occupied by Flick in 1983, before that is was Ashford’s furniture store – my parents remember going in there to look at furniture after they were first married in the 1950s." More info about the historic shops on the Saxmundham Town Council website [see Links]. – Andrew Smith]


The pump
Iron founding was a major industry in parts of 19th and 20th Century Suffolk.  As well as the Ipswich-based Ransome companies,  Garretts of nearby Leiston created a small industrial town in the heart of the countryside. A fine, well-preserved town pump in cast iron stands not far from the shop above. 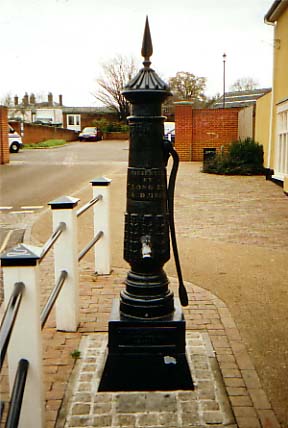 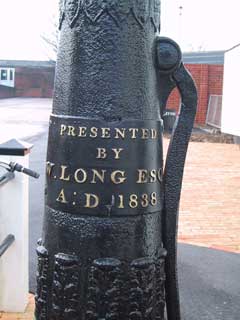 Photos courtesy Andrew Smith
The relief text picked out in gold on the pump reads:

[UPDATE May 2010: "Regarding the pump in Saxmundham, which you feature – in 1868 W. Long was the local lord of the manor, whose seat was Hurts Hall.
From the Saxmundham Town Council website (see Links):
The Long family have been associated with Saxmundham from the 17th century, originally coming from Wiltshire; there are several memorials to the Long family in the parish church. Samuel Long (1638-1683) was appointed secretary to the Jamaica Commissioners immediately after the conquest of that island, and on his return to England purchased Hurts Hall and the manor. The much older sub-manor of the Swan family was absorbed into the Long manor in about 1778. The Rt. Hon. Sir Charles Long was MP for Dunwich and created Baron Farnborough in 1826. According to the 1840 census, William Long lived in Hurts Hall with his wife Ellenor, their five children, a governess, five male servants and ten female servants. It was William who built the Market Hall (originally a corn exchange), the school rooms next to the parish church, and he donated the Town Pump. Hurts Hall was the seat of the Long family until the 1950s.
Regards, Dick Williams in Cheltenham" whose excellent Village Pumps website (see Links) is not to be missed.] 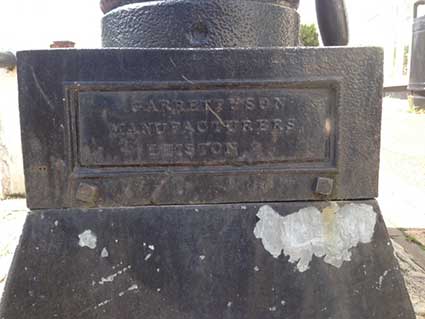 On the base in a rectaugular frame: 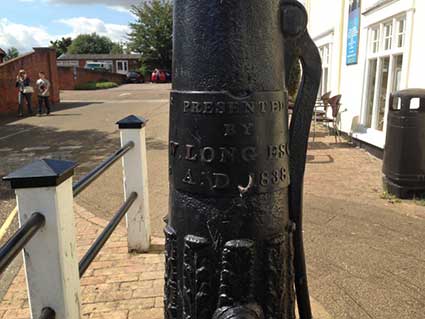 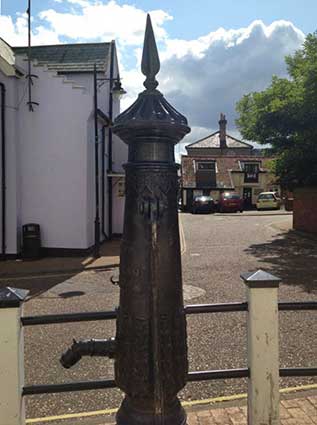 By 2015 the lettering on the body of the pump has been painted over in black. 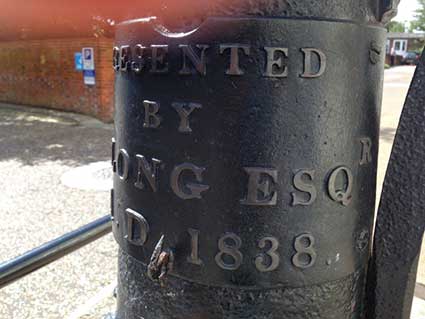 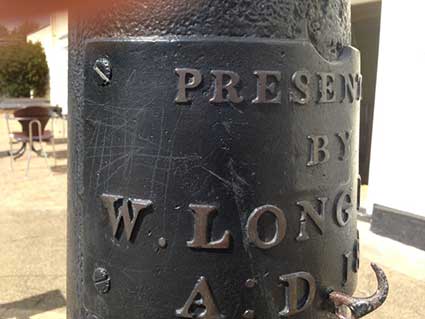 Let's look at the Market Hall (below left) which stands hard up against The Bell Hotel.

Here we find atop the fascade the large town emblem incorporating the Long family (as commemorated on the town pump)  coat of arms, wheat designs, and inscription 'DIEU ET MA PATRIE': 'God and my country'. We'll get the text on that small tablet below the crest at some point, too. It is perhaps of interest that this is an uncommon motto in Britain; the other notable use is by the noble family of Marton of Caperwray Hall in Lancaster which is of Norman origin and great antiquity. 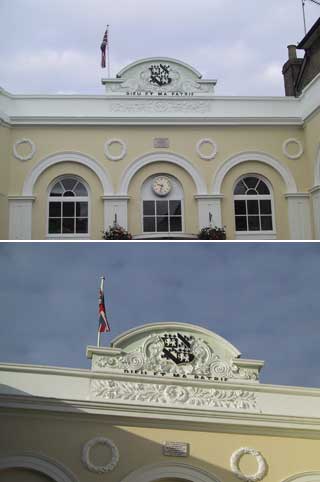 15.4.2011 - A contribution from Andrew Smith, designer of the Saxmundham Town Council website (see Links; they have a page on Saxmundham Museum):
'I can’t remember if I’ve ever sent you the old pic I have of the Wine shop in Saxmundham – the pic is from the turn of the Century (1900 that is) – that’s my guess, but it may be a little older than that. Interestingly it is called H Waller & Sons and I have Wallers in my family.
Interestingly, it was a Threshers wine shop until about 2 years ago – it was a “Local store” for a while and then closed. It’s been empty for a while but people have been working on it now for several weeks. They’ve taken a lot of care with the façade, but now obliterated the “Peter Dominic” painted lettering. So I got a pic for your collection and will try to get one when it’s finished.' 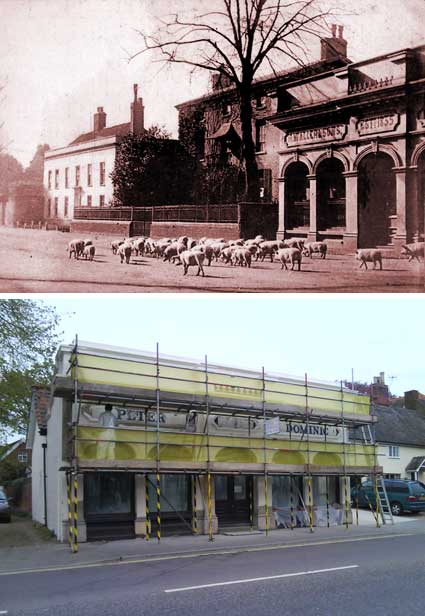 (Photographs courtesy Saxmundahm Museum and Andrew Smith)
The rather wonderful sepia image (above) of a time when a herd of pigs could stride purposefully down the middle of the A12 (although it may not have been called that then) shows two of the three of the cartouches on the fascade. This confection of romanesque arches and square half-columns has always  drawn the eye in Saxmundham's main street. We well remember it as a Peter Dominic off licence from over thirty years ago. Many thanks to Andrew.