The village
Woolverstone was known to exist as a village in Anglo Saxon times when Viking raiding parties frequently came up the Orwell; the name is thought possibly to have originated when a leader of one of these raiding parties, named Wulf, sacrificed a native villager on a glacial monolithic stone which stood near the village – hence Wulf Stone. The village today, associated with Woolverstone Hall, is on the main road down the Shotley peninsular from Freston. 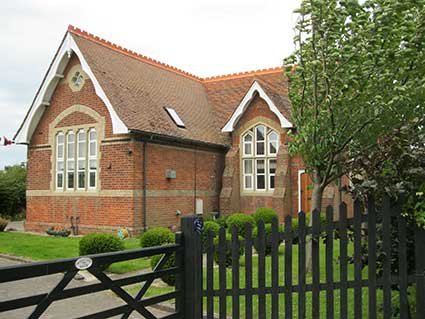 2016 images
Above: the old school, now a residence, is worthy of note, featuring a stone crest on the road elevation. Not far up the road towards Ipswich are the Widows' Homes. 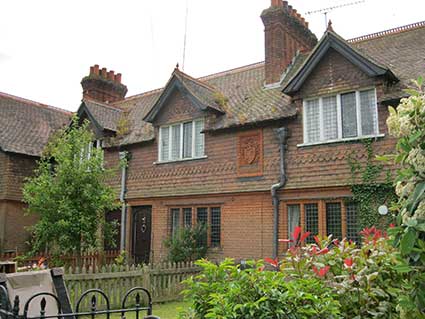 The coat of arms bears the motto 'DEL FUEGO... IO AVOLO' on a scroll. This translates, apparently, as 'Ring of fire'. 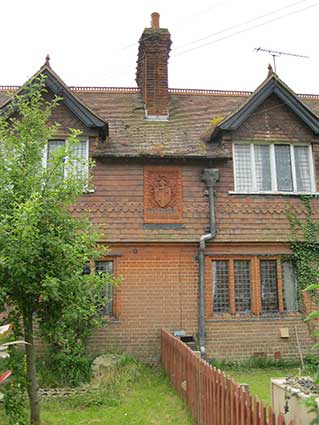 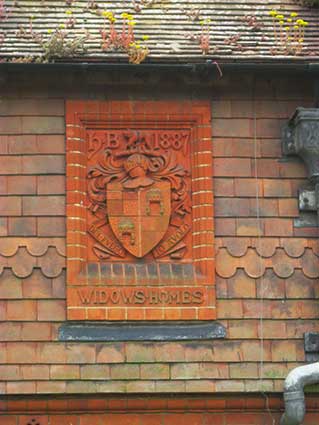 There is a story that one of the Berners family returning from abroad, brought back a pet monkey which he kept in the back yard of the house, since called ‘Monkey Yard’. One night, a fire broke out and the monkey made so much noise that it woke the household and thus saved their lives. Perhaps symbolically, all the monkeys were removed by the family when the estate was sold. There are however, two remaining monkeys which can be seen at either end of the roof gables on the Widows Homes in the village. See also the Monkey Lodge in Freston. 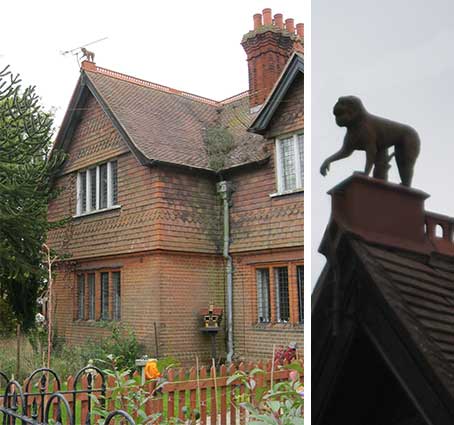 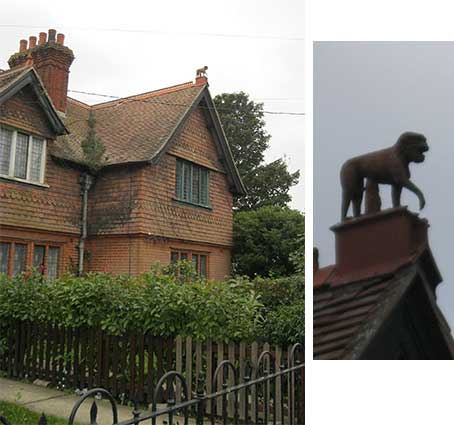 Above: the monkeys advancing with mouths open; that on the west end is shown without the pesky television aerial.

Berners Hall, Listed Grade II
'Reading Room and attached cottage, now village hall. 1887. Probably by JP St.Aubyn and HJ Wadling. Red brick with brick plinth and tile hanging to cottage. Plain tile roof with ornamental cresting tiles and gable finials. Brick stacks to hall left cross gable, main ridge far right and cottage rear gable. Restrained Arts and Crafts style. Single storey hall with cottage of single storey and attic. Long range has projecting cross gable to left with small bellcote, main range of hall with, to right, projecting porch and cottage gable facing. 6-window range in all of wooden mullion windows, those to hall with transom. Mainly of 3- and 4-lights they have fine leaded-light casements with coloured glass in the narrow margins. Plank door in re-entrant angle of hall cross wing. Double-leaved plank Gothic arched door to front of porch with low windows to sides. A 4-light and a single-light casement to the cottage with a 4-light casement over surrounded by tile hanging. On left end of hall a similar window with two transoms. On rear wall a further 3-light and 4-light window with transom and similar glazing and a single-storey flat-roofed C20 extension. At the right end a projecting arched recess under a pentice roof with small C20 door within. 4-light window to cottage first floor gable.
INTERIOR. Hall has open roof with rafters, purlins and wood and metal ties. Stage to one end behind proscenium arch.
This hall, which was commissioned by the Berners family, is a carefully judged design where the fine glazing is made a feature. St.Aubyn and Wadling were carrying out a major rebuilding of the church at the same time as the construction of the hall and they may have designed it as well. It was used as a temporary church but was presumably intended to be the Reading Room it then became. The integral caretaker's cottage suggests this use was intended. In the C20 it was the men's club and then the village hall.'

War Memorial in front of Berners Hall, Listed Grade II
'War memorial. c.1920. Stone ashlar. Memorial is in the form of a wayside cross with stepped octagonal plinth and shaft surmounted by cross with circle in angles. Stands in front of, and forms a group with, the Village Hall.' 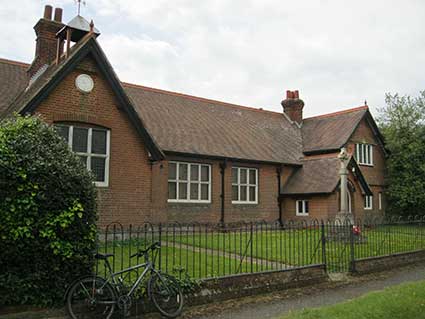 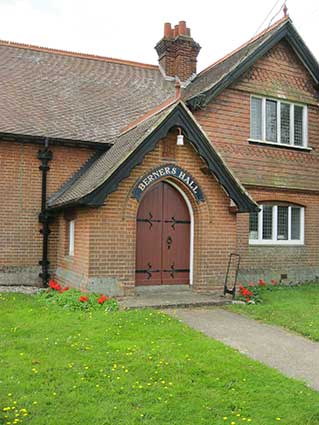 Steeped in village history, the hall was originally built to substitute for the Church of St Michael, Woolverstone, when it was remodeled in the late 1800s. Berners  Hall, formerly known as the Club Room, when it was a meeting place for the men of the village where most evenings were spent playing cards, darts and billiards and to enjoy beer and cigarettes which they could also buy to take home. It is now the village hall.
The 'HB' initials seen on the Widows' Homes and Berners Hall undoubtedly commemorate Hugh Berners (see below). 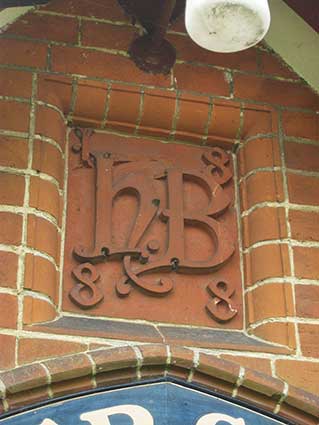 The Berners family has undoubtedly left its mark on the village. A number of houses of similar architecture indicate that the Berners family built these houses for the estate workers. They date from 1868 to 1888. In 1989, recognising the value of the common design and architectural detailing of the houses within the village, Babergh District Council proposed to designate the area as a Conservation Area.

Berners Estate owners
William Berners erected Woolverstone Hall in 1776. A 96 feet (29 metres) high obelisk was erected in 1793 to William's memory by his son, Charles Berners (1767–1831), High Sheriff of Suffolk, which was damaged by a fire, reputedly lit by soldiers on the way back from the pub, and demolished during World War II. The estate passed to Charles's brother and, in the 1880s, Henry Denny Berners, LL.B., Archdeacon of Suffolk, resided at Woolverstone Hall. His son John became the next owner, followed in 1886 by John's brother, Hugh Berners (died 1891), a Royal Navy captain. The estate became the seat of Charles Hugh Berners, High Steward for Harwich, Essex, the great-grandson of William Berners.

Woolverstone Hall
Woolverstone Hall is a large country house, now in use as a public school for girls; it is one of the finest examples of Palladian architecture in England and is Listed Grade I. It is set in 80 acres of parkland on the banks of the River Orwell. Built in 1776 for William Berners, a property developer from London who had gradually been acquiring extensive land­holdings on the Shotley peninsula. When he was able to purchase the estate in 1773, it was no doubt with the idea that he could now build a fashionable gentleman's country residence in a prime situation. The site of Berners’ house is typical of the 18th Century interest in the landscape and appreciation of beautiful views and vistas. The back of the house overlooks the River Orwell at a picturesque curve and from the sides of the house there are views both down and upstream towards Ipswich. Unlike many 18th Century houses of greater repute, Woolverstone Hall is as attractive from the back, as the front.

Berners engaged as his architect the self-taught John Johnson from Leicestershire, who could provide a building in the fashion and taste of the time. Johnson had already worked on designs for houses in London (Cavendish Street, Harley Street and Grosvenor Square) including some in Charles Street on land developed by Berners, and these share internal details with Woolverstone Hall.  Woolverstone Hall is the best of Johnson's surviving country houses and is therefore of some architectural importance. Johnson's design is classically Palladian, consisting of a central block comprising the main living areas, flanked by two smaller wings (added in 1823 by Thomas Hoppe) containing the domestic offices; kitchen, larders, laundry, brewhouse and so on which made the typical English country house a self-sufficient community. The wings are connected to the central block by elegant corridors. The house is built of Woolpit brick, with Coade stone ornamentation.

The estate passed to Charles's brother and, in the 1880s, Henry Denny Berners, LLB, Archdeacon of Suffolk, resided at Woolverstone Hall. His son John became the next owner, followed in 1886 by John's brother, Hugh Berners (died 1891), a Royal Navy captain. The estate became the seat of Charles Hugh Berners, High Steward for Harwich, great-grandson of William Berners. The manor was sold to Oxford University in 1937. It was requisitioned as a naval training establishment during World War II and in 1950, the London County Council (later the Inner London Education Authority) took it over as a boys' boarding school: Woolverstone Hall School. In 1992, the property was sold to the Girls' Day School Trust, who relocated Ipswich High School to Woolverstone Hall. Woolverstone Hall became a Grade I Listed building on 22 February 1955.

Originally situated in a 400-acre wooded park extending to the River Orwell, Woolverstone Hall sat opposite Orwell Park, home of Colonel Tomline (builder of the Westerfield-Felixstowe railway), and contained a herd of fallow deer. The curved front offers views of the river and the Nacton shore. The Berners familywere also at Erwarton Hall. 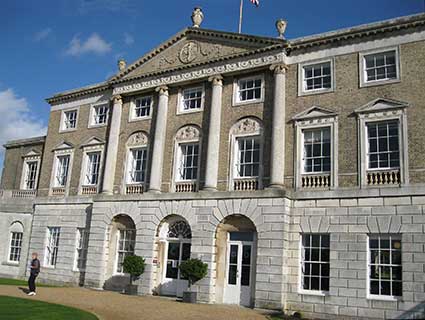 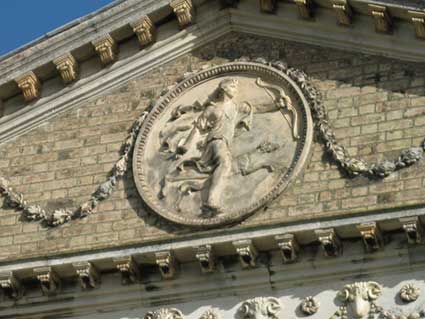 Above: the Palladian frontage of the hall featuring a hunter with bow and a hound in the central roundel. Below a rococo moulded ceiling and the view of the formal lawns and view of the River Orwell. 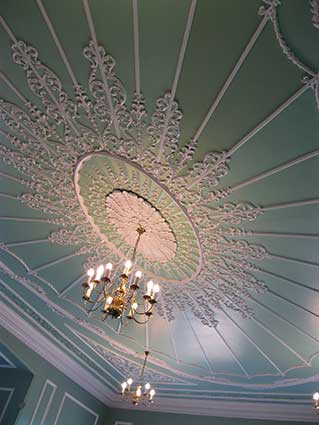 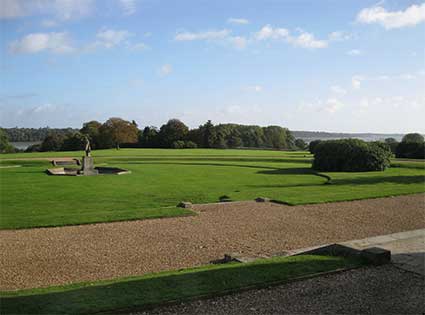 Below: one of the Adam-style fireplaces, seen in a room off the Grand Hall. The rear of the hearth is a form of pargetting – presumably in fireplace cement – featuring the once-ubiquitous Berners Estate monkey with a monogram: 'CHB' (standing for Charles Hugh Berners) and the split date '18...92'. See above for more surviving monkeys in Woolverstone village and on the Monkey Lodge at Freston: the other end of the Woolverstone Hall Carriage Drive. 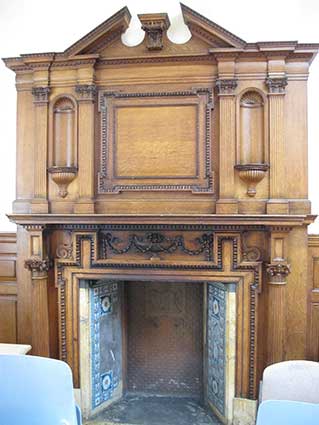 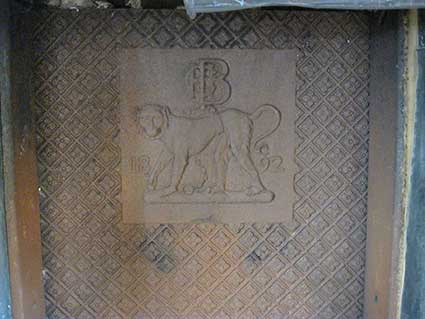 The carved and polished wood is counterpointed by the ceramic tile panels either side of the hearth. That on the left is damaged, but the panel on the right features a full-length figure of a man holding a spear. Split up in and around the foliage are the asymmetrical words 'THE HUN- ... TE ... R'. This may refer back to the hunter depicted on the hall's facade. 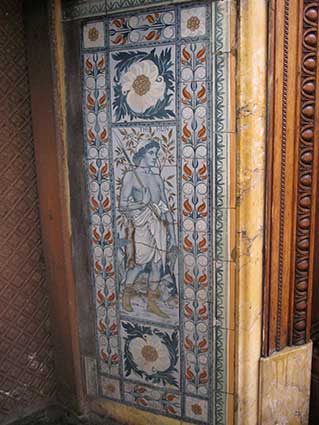 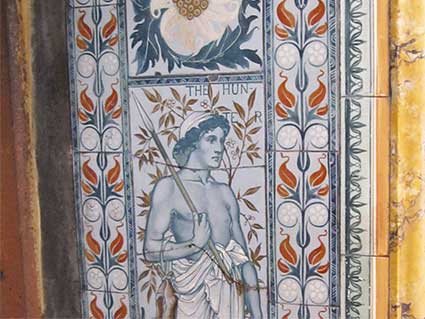