7 Tavern Street
In Tavern Street, opposite the entrance to The Walk (see our Plaques page) you can find several panels which someone has done their best to expunge. They still (just!) advertise the wares of a previous shop - it is Woottons the hairdresser [thanks for the information to Trevor an ex-Ipswichian exiled in Norfolk (left the town in 1957) from the Guestbook].
[UPDATE 2.9.2012: "It definitely was Woottons.  This is really going to date me, my Mum would take me there to have my hair cut when I was a child. Carolyn Saxon"
"Since reading your web site, I have been more alert to writing on walls - it was only a few weeks ago that I noticed writing above Boots/Tower Ramparts in Tavern Street. Keep up the good work. Tina Hammond"] 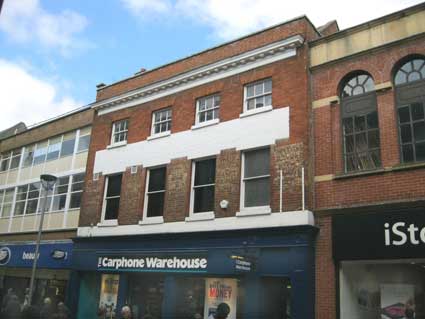 [UPDATE January 2010: Dave Riseborough sent in some much better images of Wootton's advertising – we're pretty confident about the double-'t' – to whom our thanks.]

Here are the five panels on the first floor of 7 Tavern Street, once the home of a great emporium run by the Wootton family, selling fancy products to the gentry. Now it's the Carphone Warehouse. At the time of these photographs an estate agent's board obscured part of the lettering.

What an odd litany of services and goods Wootton's must have provided... 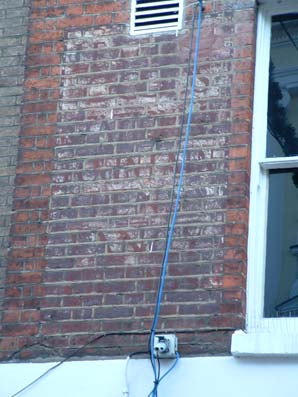 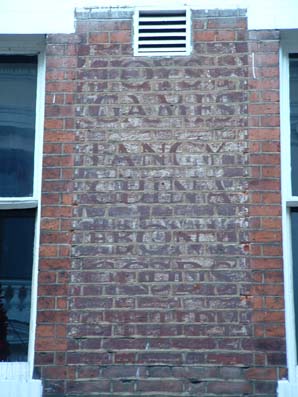 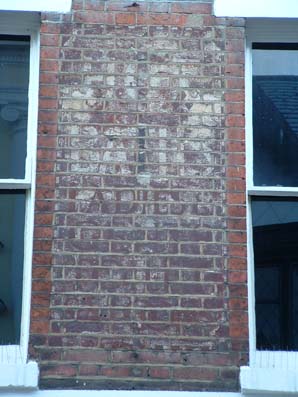 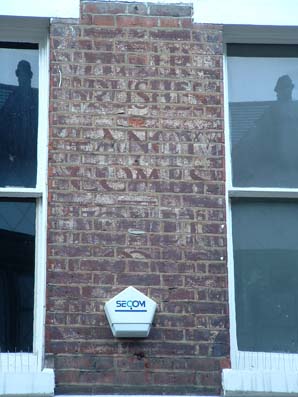 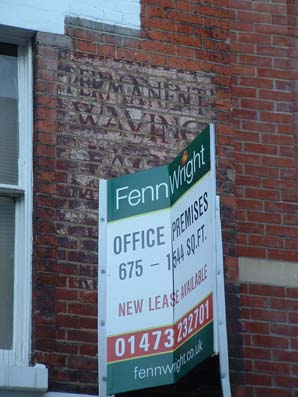 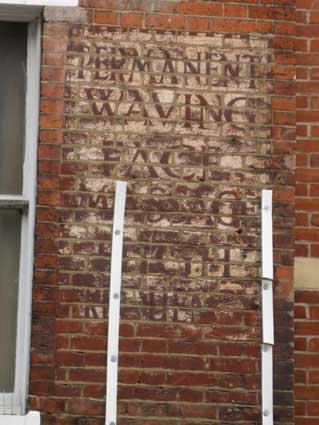 2013 image
PANEL 5 (above) is obscured by the estate agent's sign, but the 2013 view (above right) reveals a little more of the lettering:

We're reasonably sure on 'FREQUENCY'. The final word has been covered in brick-red paint: 'TREATMENTS', perhaps? What sort of high frequencies might be involved? 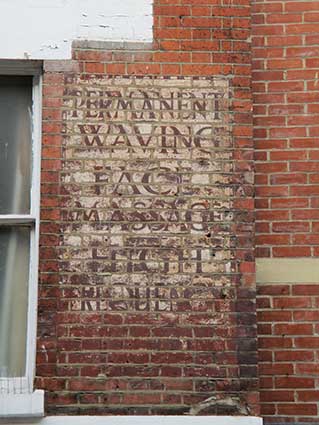 2019 image
At last in 2019 the horrible plastic estate agent's sign strips have been removed. Another look at the word below 'Frequency' reveals an 'N' below the 'CY' of 'Frequency', possibly with an 'I' before it, so the last word might end in 'ING'.

The large white-painted area above the first storey windows probably bore the company name (see the 1958 photograph below to confirm this). Deciphering these panels has probably damaged our eyesight for good (and we're quite open to correction about the interpretation). The panels all display a pale or white background with maroon chequer border and decorative maroon coloured lettering which has been expanded or condensed to fit available spaces. The interlinking double-'O's (as in 'GOODS' are characteristic. Suffolk Record Office has an original advertisement for "Wootton's Shilling hollow-ground razor" [Wootton, George, fl 1890, razor seller, of Ipswich, Suffolk] and the same proprietor is listed as at 7 Tavern Street, Ipswich and 2 Bent Hill, Felixstowe. So who fancies a face massage after your hot bath - and perhaps you'd like to browse our catalogue of cutlery and fountain pens? 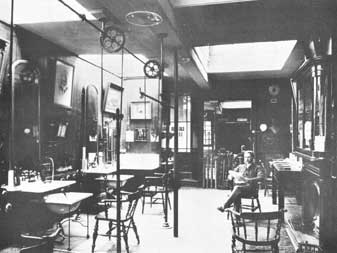 c.1890s
The above photograph is apparently the interior of George Wootton's barber shop in Tavern Street; date unknown. Presumably the gent reading the paper is Mr Wootton himself awaiting his next customer. We love the high-tech pulley system for transmitting rotary power from a motor at the rear of the shop, via a shaft mounted near to the ceiling and down to each hairdressers' clippers.
[UPDATE 27.8.2017: 'Hello, your photographs of the old Wootton's shop in Ipswich have been drawn to my attention. The shop was set up by my great grandfather George Wootton in the latter part of the 19th century. He had moved from Aylesbury, where he had been a hairdresser. He died aged 47 leaving 10 children and the eldest boy aged 19 – also called George – took over running the shop. Looking at the … photo … it was taken in the late 1800s and is of our great grandfather so it must have been the second George.
Under George the business grew and they set up other shops, including at Felixstowe and Clacton, all run by various of the brothers. My grandfather who was the youngest of the boys ended up with the business and this was taken over by my uncle who set up another branch in Norwich. My father was also involved and they ended up specialising in shaver repairs, as there was so much competition on the high street for all the other services they offered at one time! The business was eventually sold on in the 1970s.
My uncle, John Wootton, is still alive (aged 90) and knows a lot about the history of the business. If you are interested there's some photos of the shop and of the Wootton brothers on Facebook: Ipswich My Home Town Jenny Wootton (John's daughter and my cousin.) Best wishes, Caroline Ford (née Wootton). Many thanks to Caroline for getting in touch.]

[UPDATE 17.3.2020: Morvyn Finch points out that the Ipswich War Memorial website (see Links) has  an entry for Robert Betrand Wootton (1916-1944 – died on active service with the Central Mediterranean Force) who worked for the family business of Woottons (Ipswich) Ltd. His father was Bertrand Spragg Wootton (b. 1879) who, along with Bertrand’s brother Frank Percival Wootton were company directors of the business. Robert’s address is given as ‘Quinton’, 57 Bucklesham Road, Ipswich.]

1934 advertisement
The above advertisement comes from "The Myrtle", the Ipswich (Museum Street) Methodist Church Magazine, August 1934.  Other advertisements from this publication can be found on our Introduction page (A.A. Gibbons) and Scarborow opticians in Dial Lane. Thanks to John Barbrook for the publication.

Incidentally, Simon Knott of this parish discovered a 1969 Regency Ipswich Book in a charity shop which contains many display ads. One of them is for 'Woottons – Ladies Hairdressers, Gents Hairdressers, Electric Shaver Service Centre' at 10a Queen Street, Ipswich. He has the image on his Flickr photostream. 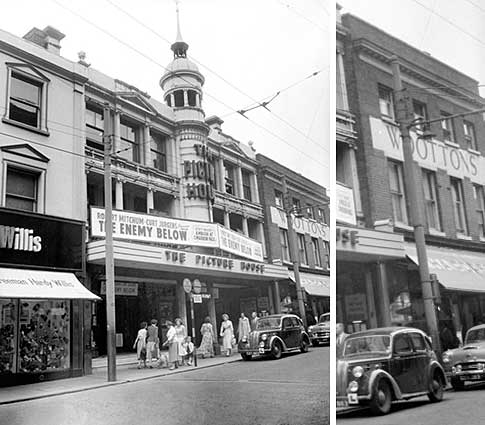 1958 image
Above: the striking frontage of the Picture House in Tavern Street draws the eye away from the next door shop: Wootton's (see enlargement). The Picture House Cinema opened in December 1910 and was the first purpose-built cinema in Ipswich. It closed in 1958 and was demolished. It was replaced by a Timothy White's chemist shop, now a branch of Boots. At last we see the proprietor's lettering on that white band between first and second floor windows.

Wootton's 1904
The painted sign between first and second storeys in 1904 reads: 'GEO. WOOTTON & SON'; however, the most striking feature of the shop, presumably seen by people quite far down the street is the triangular rooftop sign:

The 'Domestic Bazaar' is closer to the camera (at left) and beyond Wootton's is the Temperance Hotel.

Did Woottons make a patent medicine for treating corns?
See our 'Woottons Cure For Corns' sign found (but hidden) on Camden Road, off Foxhall Road, related to the Woottons shop. The ceramic pot lid shown on that page (and donated by a contributor) reads:

with, around the perimeter of the lid: 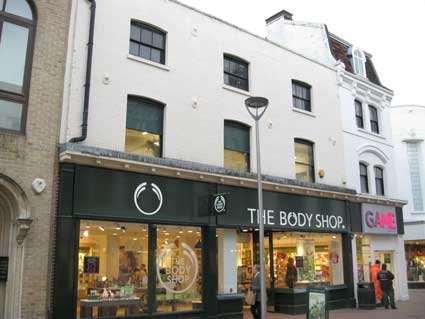 A few yards down the road towards Tower Street and it is worth looking up above The Body Shop at number 17 Tavern Street. Several strengtheners are in place on the brickwork, although the whole area has been whitewashed over recent years, 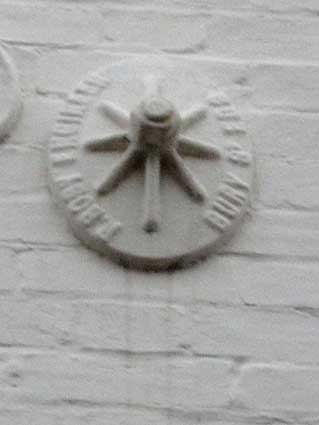 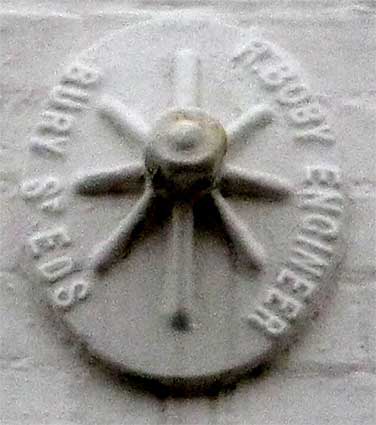 The image to the right is an enhancement. It is interesting that the fitters weren't fussy which way round the castings were placed on the wall.

In 2018 we spotted an automatic grain sorting machine in the tide mill at Sturminster Newton which stands on the River Stour in Somerset: 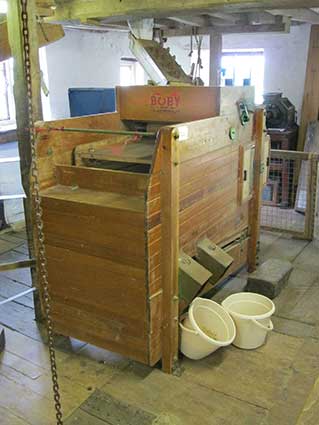 The transfer on the top hopper reads: 'Manufactured by ROBERT BOBY [LIMITED?], Bury St Edmunds England, Patents Applied For'. Which shows the reach of some of these manufacturing companies.