Bridgnorth is an attractive town in the Severn Valley. It is split into High Town and Low Town, named on account of their elevations relative to the River Severn, which runs roughly north-south and which separates the upper town and on the west bank from the lower on the east. 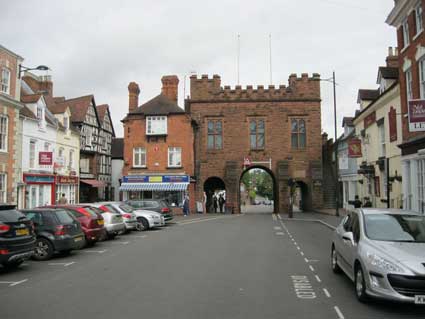 2012 images
High Street.
The North Gate provides a narrow opening for traffic to High Street. To its left is a shop, the frontage of which just reveals the long rectangular border with raised sans serif capitals:

On the right of the North Gate, above the pedestrian tunnel is the explanatory tablet which throws us back to 1646 and bitter battles in Bridgnorth betwixt Parliamentarians and Royalists. 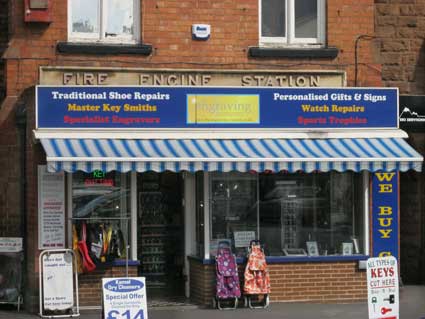 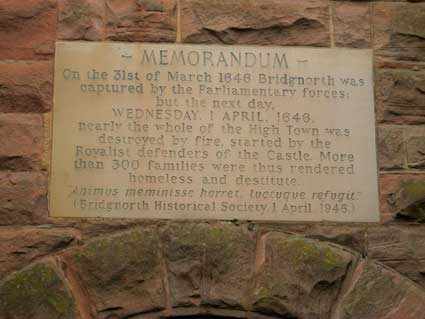 '-MEMORANDUM-
On the 31st of March 1646 Bridgnorth was
captured by the Parliamentary forces;
but the next day,
WEDNESDAY, 1 APRIL, 1646,
nearly the whole of the High Town was
destroyed by fire, started by the Royalist defenders of the Castle. More
than 300 families were thus rendered
homeless and destitute.
"Animus meminisse horret. luctuque refugit."
(Bridgnorth Historical Society 1 April, 1945.)'


At the other end of High Street is the Town Hall, under which markets are still held. 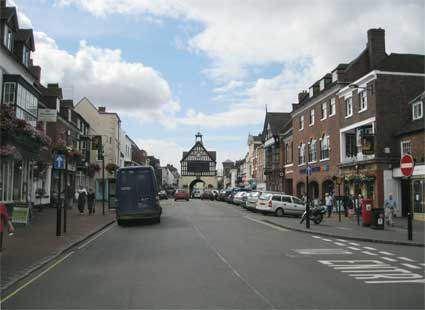 Two sets of lettering on the far wall of the building can be found:

The Royalist Latin motto of Bridgnorth Town Council means: "The faithfulness of the city is the safety of the King."

This recessed panel in one of the wooden beams presumably comemorates the two worthies who were responsible for the building in 1652. This open arch Town Hall has a lower storey of sandstone arches with brick facings, supporting a timber framed upper storey. At each end of the upper storey are a series of carved figures which act as decorative brackets. The north end of the building has a single bay window, under which there are four figures, there are two further figures at the corners of the roof. The south end of the building has two bays with four figures each, and two at the corners of the roof. The figures are detailed Medieval-style images of knights, crowned figures, musicians and other characters. The Town Hall was built just after the Civil War, in which the defeated Royalists had burned much of the town (see the North Gate above). The building was restored and altered in 1887. 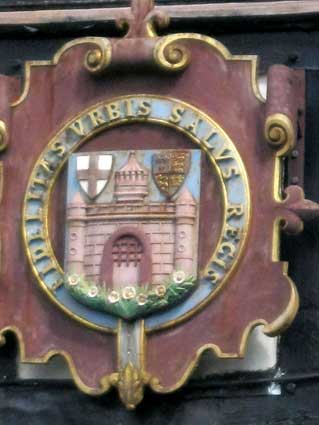 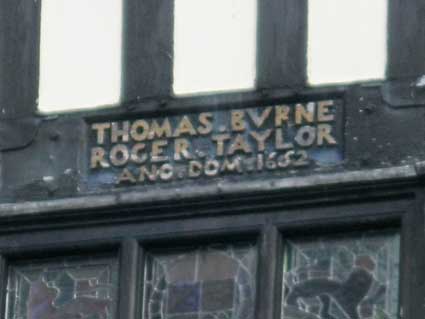 Over the road is a "real, old-fashioned shop": 'BEAMAN & SONS' with its awning and lit window display of preserved meats, even we vegetarians must doff our hat to the ceramic sign below:

and over the side entrance in hand-applied cut-out characters: 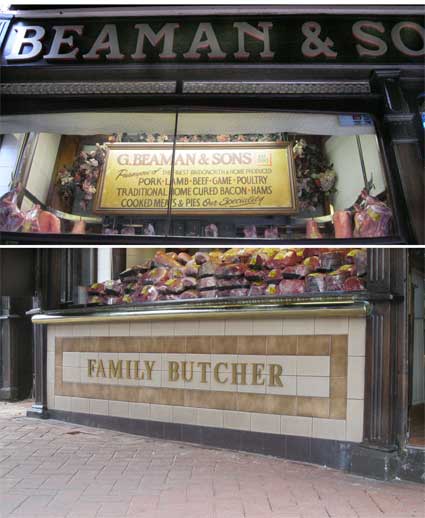 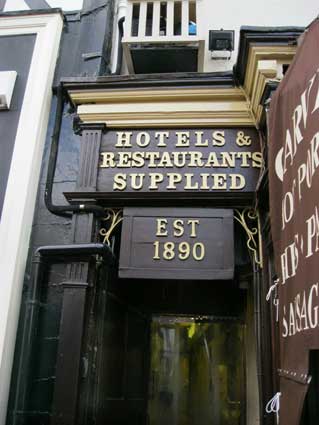 Having seen the old Town Hall with its limited market space, this attractive, polychrome, Italianate building stands nearby, Sadly, market traders were resisistant to its use. Pevsner describes it as the "magnum opus of a local man, Robert Griffiths", but it is also described as 'gross Italianate'. Polychromatic brick - red, blue and yellow, plus a typical tower with corbelled arches. Grade II listed, the New Market Hall stands on the junction between High Street and Listley Street and was built in 1856 and is now a museum amongst other things.
The corner nearby is irresistable: a column of signs. 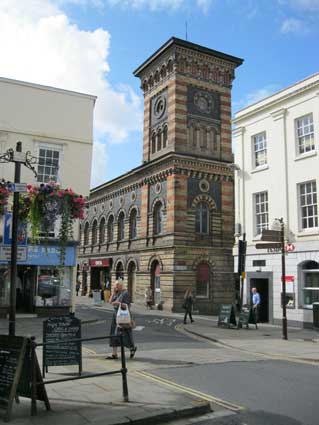 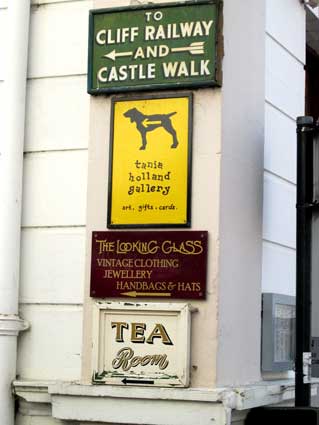 West Castle Street.
The Shakespeare public house stands on a junction and is not alone in the town in bearing old-style road signs with chequer strips above. 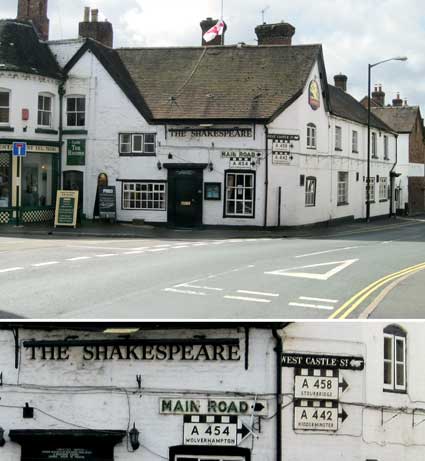 Castle Terrace.
The back entrance to the former Ball Hotel (now a 'gastropub'), which fronts East Castle Street, has a castellated brick and stone archway with prominent lettering:

Not far away is the upper entrance to the cliff railway. Below, the lettering on the half-round window at the bottom 'station': 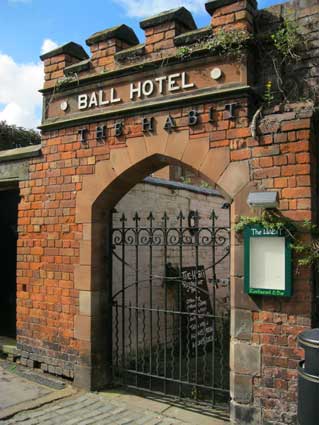 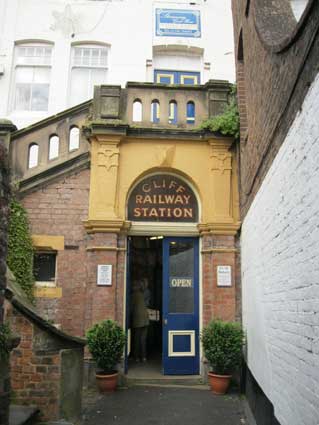 Bridge Street.
It is only a few steps andabutting the bridge over the Severn, we find one of the finest surviving pieces of historic trade lettering in the country: 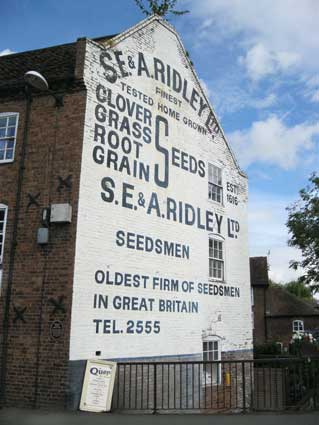 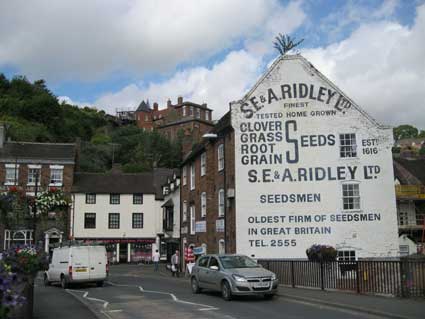 The helpful oval plaque on the building gives this information:
"RIDLEY'S SEEDS EARLY C19th. This was one of many warehouses when the River Severn was a major highway for transportation of merchandise. Between the warehouse and the recommencment of the towpathwas a small dock from which goods were hoisted into the warehouse. On the side of the building is a record of the flood water levels." 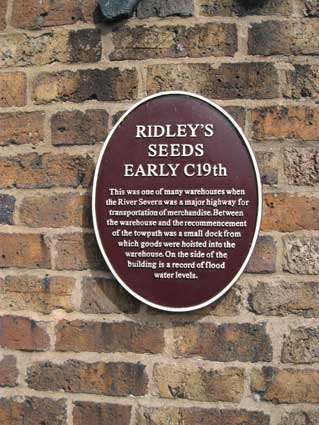 Low Town
Bridge Street on the Low Town side carries some of those vintage metal road signs, both with a blue RAC badge. 'A458 STOURBRIDGE' and 'A442 KIDDERMINSTER' 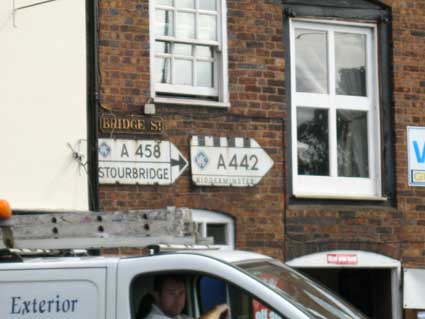 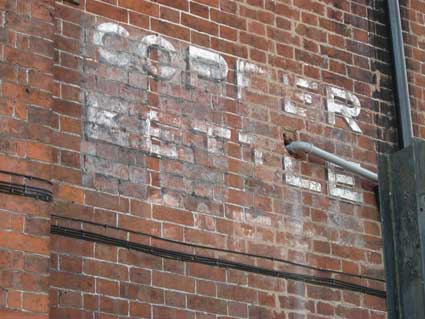 'COPPER KETTLE' in Mill Street is no longer a cafe, but the faded white capitals with narrow drop shadow remain. Also in Mill Street, another old metal road sign, so neglected that the lettering 'WELLINGTON' is virtually invisible.  Next door, two public houses stand either side of a narrow lane. On the right is the weather-worn lettering on black-painted brick of The Vine Inn. 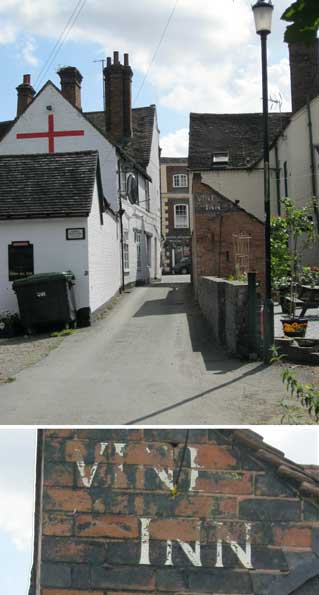 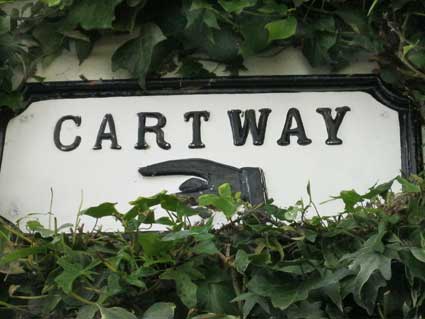 Back over the bridge, turn right for the uphill twisting lane which climbs the cliff to High Town. Creeper nearly covers a cast iron sign with pointing hand. Until 1786 this was the only route to High Town for carts. In 1786 the New Road was built, making accessibility between High Town and Low Town much easier for man and beast. During Bridgnorth's heyday as a thriving port there were upwards of 50 pubs and eateries around Cartway and the quay area, many establishments disreputable. The labourers mainly lived in Low Town because traditionally those with little income were forced to have to stay on the “ lower grounds” and be subjected to the turmoils of the River Severn’s flooding. There is a plaque on the wall of the Cartway telling of how the sandstone caves were used as dwellings until 1856. These were uncovered in 201l, but sadly they were hidden again by new property development. Bridgnorth had many areas with cave dwellings because people were poor and the sandstone was easy to shape. 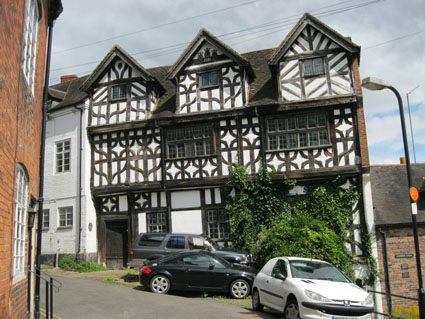 Near the foot of Cartway is Number 52: a very beautiful large timber frame house with a cobblestone front once called "Forster's Folly". Known as Bishop Percy's House, it was fortunate to have survived the devastating fire of 1646 during the Civil War. It was later owned by Bishop Percy, reverend and author 1729-1811. In the central gable is the date '1580' carved in relief on a cross-beam and painted white. 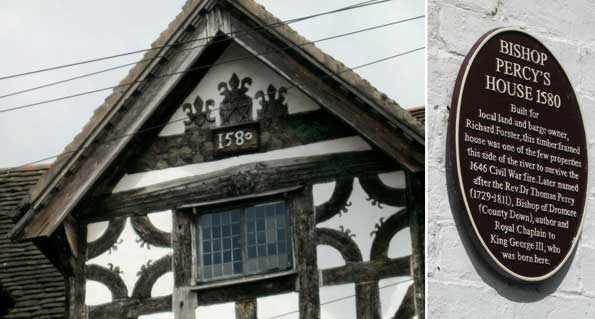 The oval plaque reads: "BISHOP PERCY'S HOUSE 1580. Built for local land and barge owner Richard Forster, this timber framed house was one of the few properties this side of the river to survive the 1646 Civil War fire. Later named after the Rev Dr Thomas Percy (1729-1811), Bishop of Drumore (County Down), author and Royal Chaplain to King George III, who was born here." 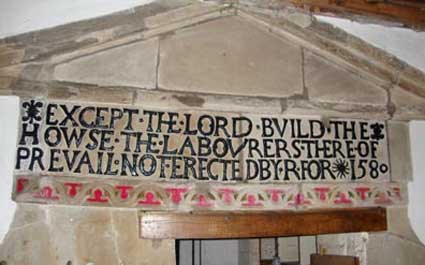 Although the interior is not accessible to the public, it is worth recording a splendid example of historic lettering within – a grand fireplace bearing the inscription:
'EXCEPT THE LORD BUILD THE
HOWSE. THE LABOURERS THEREOF
PREVAIL NOT. ERECTED BY R FOR* 1580'

Note that 'thereof' has been made into one word and two full stops inserted to make the words a little more understandable. The ground floor would have been a commercial space for Forsters haulage business. The fireplace was opened out to form a kitchen in the early 1950s. [See the excellent wesite http://www.bishoppercyshouse.co.uk/index.php] 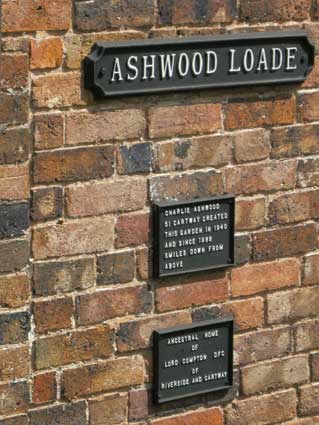 ANCESTRAL HOME
OF
LORD COMPTON DFC
OF
RIVERSIDE AND CARTWAY'

Below Bishop Percy's House is Ashwood Loade (formerly owned by Lord Compton), a brick residence with a front garden on the street. The garden was created by the owner Mr Ashwood in 1940. He died in 1988, but the plaque on the wall states he’s still looking down on it. Further down is Bassa Villa - a building dated 1591. A board outside tells of the origin of the name and its connection with Low Town; it was one of the many taverns herebaouts.

Bridgenorth Station
A gem of what might be called "heritage engineering" is The Severn Valley Railway which in 2012 runs from Bridgnorth to Kidderminster, but there is talk of extending the line to Ironbridge. The platform footbridge carries two sets of fine circular monograms:

'GWR' is 'Great Western Railway', the commercial company which originally built and ran the line. A less "gothic" circular monogram for the company in more modernist font can be seen on the cast iron supports of the paltform benches. 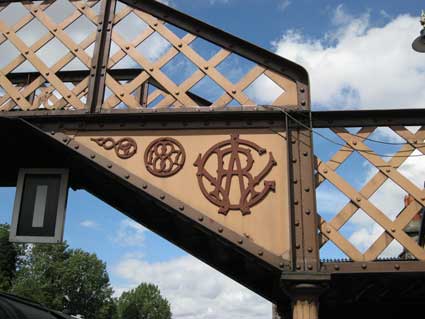 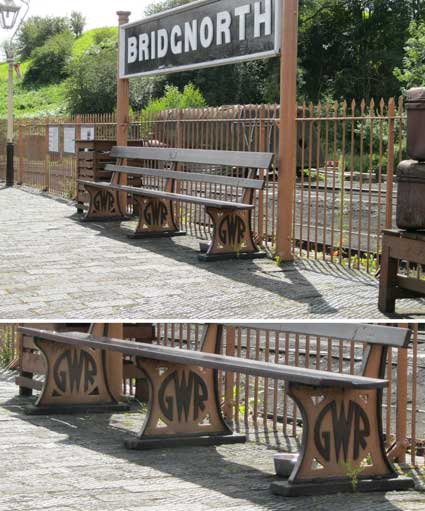 1862 saw the completion of the The Severn Valley railway line. Started in 1858, the line linked Hartlebury, near Droitwich, with Shrewsbury, 40 miles away. The important intermediate stations were Stourport-on-Severn, Bewdley, Arley, Highley, Hampton Loade, Bridgnorth, Coalport, Ironbridge, Buildwas, Cressage and Berrington.The original Severn Valley Railway, which borrowed its locomotives and rolling stock, was absorbed into the Great Western Railway in the 1870s. The Great Western Railway (GWR "God's Wonderful Railway") was a British railway company that linked London with the south-west and west of England and most of Wales. It was founded in 1833, received its enabling Act of Parliament in 1835 and ran its first trains in 1838. It was engineered by Isambard Kingdom Brunel, who chose a broad gauge of 7 ft 0 1⁄4 in (2,140 mm) but, from 1854, a series of amalgamations saw it also operate 4 ft 81⁄2 inch (1,435 mm) standard-gauge trains; the last broad-gauge services were operated in 1892. The GWR was the only company to keep its identity through the Railways Act 1921, which amalgamated it with the remaining independent railways within its territory, and it was finally wound up at the end of 1947 when it was nationalised and became the Western Region of British Railways.

From the railway, as it enters Bewdley Station, you can clearly see (when it's not covered with creeper):
'LOWE'S
ROPE & TWINE
MANUFACTORY'

The firm was established in 1801. In 1866, new buildings were added and in 1870 the construction of a steam house brought mechanisation to the ropery. The firm's main customers were Kidderminster carpet manufacturers who needed twine, cord and thread. Lowes also supplied pit-ropes to local collieries and made timber-felling ropes and bell ropes. Lowe's prosperity was helped by government contract work during the First World War. However due to falling demand in the following years the business began to suffer and finally closed in 1972. The name above the cottage door: 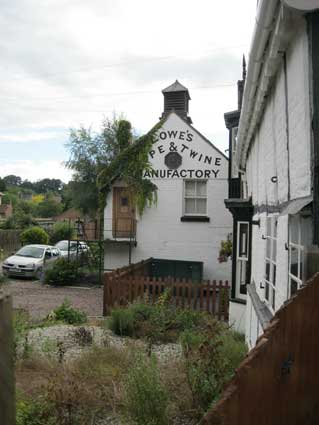 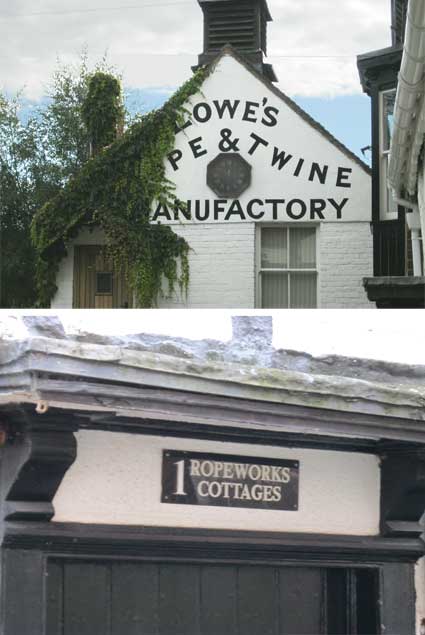 Kidderminster Station
Behind the main line and S.V.R. stations at Kidderminster stands an original brick building with partially obscured lettering angles on its gable end. An attempt was made presumably in 1947) to 'rebrand' the building by obliterating 'Great Western Railway' on the left and overpainting it with 'British Railways (WR)' in a similar capital font to fill up the avialable space. Weathering has faded the more recent characters and both sets can now be deciphered. In modern times under the "definitely break it all up into impossibly unwieldy pieces" approach to running a national railway imposed by the Major government, the companies change so often, noone would bother to repaint such a sign. Come to think of it, this 'Goods & Coal Depot' is a fixed asset, so these days should bear 'Network Rail' (before that 2001-6, 'Strategic Rail Authority') logos. if indeed the building was owned by them. Thank goodness nobody bothered the damage it further. It now serves as workshops for the Severn Valley Railway. 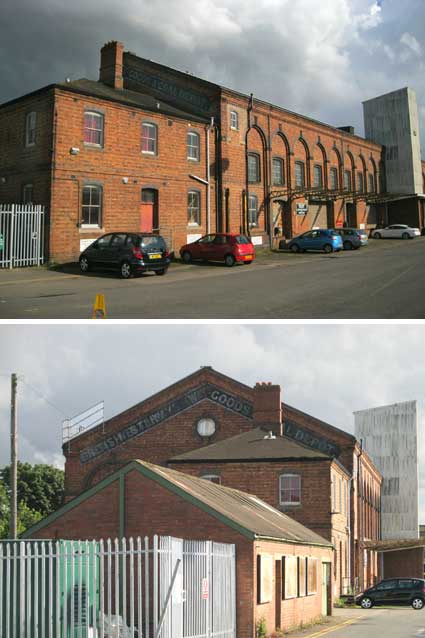 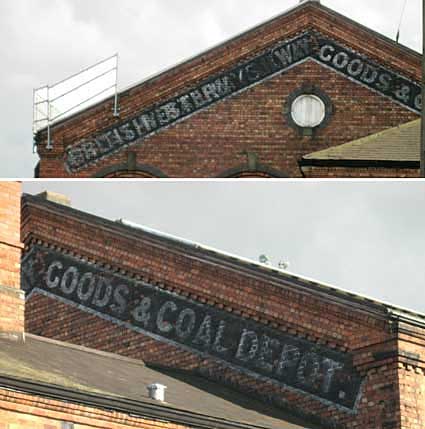 The building is more than double the length shown here.
For other examples in this region see Ludlow and Ironbridge.