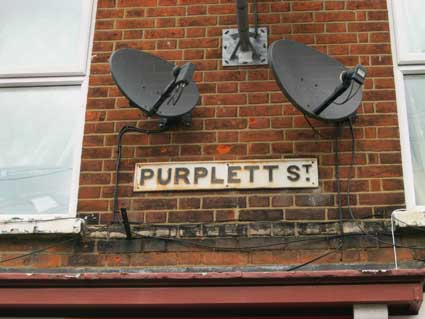 The rather obscured name plaque shown below sits between numbers 17 and 19 Purplett Street: 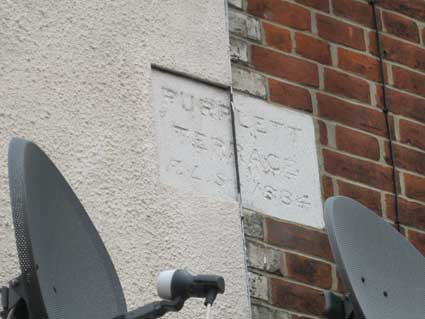 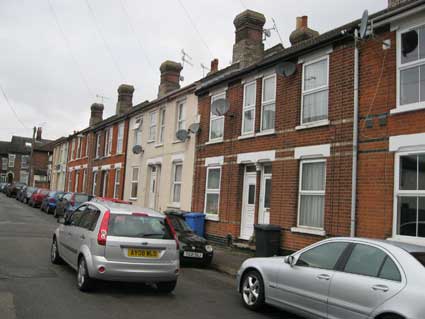 A view of Purplett Street from the Hawes Street end; the name plaque is sited above the blue bin.
See Street name derivations for the variants in the 'Puplett' family name and the relatively recent change to the current form. Interestingly, one of the famous women in Ipswich history was Alice Tooley:-
"Alice Tooley (née Purpet), was a business woman who, after the death of her husband, became a freewoman of Ipswich. Henry Tooley was one of the town’s richest merchants. They traded mainly in cloth from their property on St Mary’s Quay. None of their three children survived adolescence.  When Henry was away, Alice supervised shipments, collected debts, made payments and kept everything running. Henry died in 1551, and left most of his money to the townspeople of Ipswich, including the Foundation for the alms- houses. Alice saw these become a reality before her death in 1556. Alice and Henry’s tomb is at St Mary at the Quay church." [Information from the Ipswich Women's Festival website, see Links.]

Possible derivation of 'Purplett'
In addition to the above source of the name 'Purplett' we read in Sylvia Laverton's book on Shotley peninsula (see Reading list):-
"Although the peninsula has many deposits of clay, sand and gravel these have not given rise to specific place-names. An exception is Purte pyt [recorded in Domesday Book]... which appears to have been a pit or quarry in Harkstead deriving its name from Old English (Angl.) pytt with the Old English personal name Purta. There are no clues about what was in the pit. In 1086 [Little Domesday] it formed part of a 60 acre manor. Thomas de Pourtepet was a tax assessor in Harkstead in 1327. Harkstead manor records include numerous references to people called  Purpette (numerous spellings) from the 14th to the 18th centuries. Evidently the land held by Purta was divided when the parish boundaries were drawn, for the lords of Harkstead manor owed suit in Wolverston manor court for Purpette throughout the 15th century. In his will (1499) William Tenderyng, then lord of Harkstead manor, directed his executors to 'sell my lands called Purpetts'. The Harkstead and Chelmondiston Tithe maps show Gravel Pit Fields and Harkstead Clappitts lying across their common parish boundary. These may mark the site of Purta's manor."
Perhaps this is the derivation of the name still enshrined in 'Purplett Street'.

Incidentally, the same book notes that Ceolmund's estate, recorded as Ceolmundeston in 1174 (Pipe Rolls) but not named in Domesday Book, evolved into Chelmondiston parish ('tum'* = estate). Herchesteda (1086) – Hereca's place – gave its name to Harkstead parish.
[UPDATE 2.3.2018: 'I am sure that it is right that the Purplett surname derives from Purtepit.  However, I doubt that Laverton is right to derive that place-name from Purta.  I am writing a paper on this. Also, *'tum' = estate' should be 'tūn = estate'. Keith Briggs'. Many thanks to Keith for his contribition/clarification.]

Tyler Street
The photograph below left shows what is left of Tyler Street in 2014 – one terrace of houses and one corner property, the former corner shop – since the major reshaping of the road down to Bourne Bridge, bypassing the northern part of Wherstead Road. At one time this street would have been closely built on both sides and running down to Stoke Quay (later called New Cut West). Three thoroughfares used to run more-or-less parallel from Great Whip Street/Wherstead Road eastwards to the river, each named after benefactors of the town’s charities: Richard Felaw (died 1483), Richard Purplett (more correctly 'Puplett', died c. 1720), and 'Tyler'...
[UPDATE 5.8.2014: Here is a quotation about Tooley's and Smart's Almshouses from White's Directory of Suffolk 1855:
"... SMART'S FOUNDATION produces about £480 p.a., arising from the following property, under the will of Wm. Smart, in 1598; viz., a farm of 372A.[acres], and a piece of water of 5-and-a-halfA. at Fakenham [sic; presumably 'Falkenham', rather than the Norfolk town] and Kirton, let for £420; a third part of a farm of 91A. at Creeting, let for £150; and a fifth-part of the above-named farm of 190A. at Whitton and Brandon. One-third of the farm at Creeting was purchased with £300, left by Wm. Tyler in 1643, for schooling, clothing, and apprenticing poor children." So William Tyler (died 1643) is the third benefactor of the town's charities commemorated in these street names.]
See Street name derivations. Looking at the maps of this area on our Felaw Street page, these names appear between the 1848 and the 1867 maps, so they are Victorian impositions when new housing and other developments occurred. 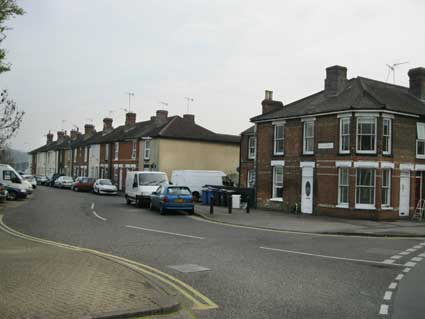 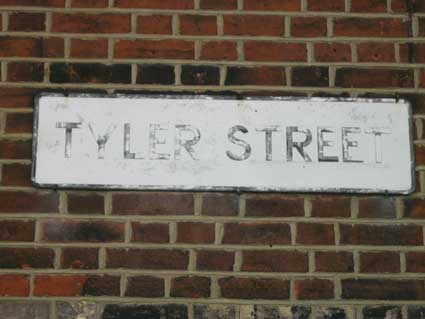 2014 images
The street namplate at this time is virtually unreadable from a distance.

Above numbers 14 and 16 is the terrace name plaque with an unusual use of italic caps: 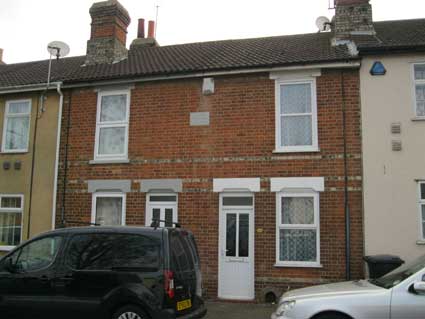 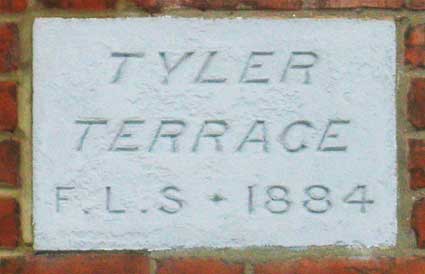 See above for the link to 'F.L.S.'
(Carolyn Saxon, contributor to this website from Florida, was born & raised at number 20.)