Marian Jordan sent these photographs of this lost sign – in fact, it's covered in cement render – which was once very noticeable on the side wall of number 62 Wellesley Road (the house entrance is in Darwin Road). Although you wouldn't know it today, this was a corner shop for many years. 'I thought you might be interested to see this painted wall advertising sign that was on the side of a house (corner of Darwin Road and Wellesley Road) when we moved there in 1980.  The original advert says The British Flag Stores, Provision Merchant, then sometime later a hoarding was placed on top of it.  The photo was taken by my husband prior to covering the wall with rendering.  It was no longer a shop when we moved in. Marian Jordan (we now live in Felixstowe)' 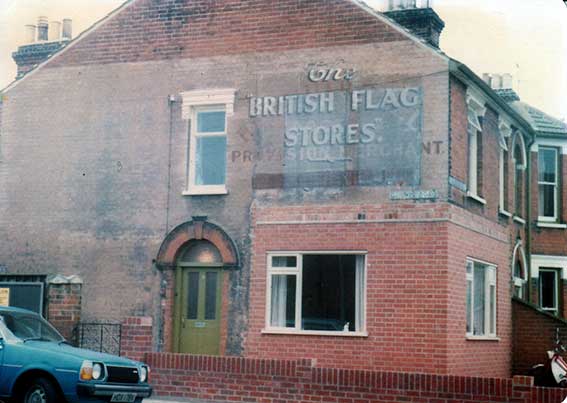 The probable phases of signs
1. Original name (‘H…..L’) in capitals arranged in an arc. The name of the trader here must be ‘HORACE SQUIRRELL’ who ran the shop from 1923 to 1936.
Below it is: ‘GROCER [almost obscured] … PROVISION MERCHANT.’ in horizontal plain capitals.
At some point the whole section of brickwork from the ground well up into the gable was painted with pale paint (which has weathered) presumably to obliterate the first sign.

was painted over it. The sign-writer has used a cursive italic ‘The’  with stylish capitals, replete with a full stop (which can’t decide whether it should be inside or outside the double inverted commas). White with a drop-shadow, including a dividing bar with flourish. Further word(s) below which are covered in a dark painted rectangle – note the tail of a ‘Q’ and a stray full stop with drop-shadow to the right, just above the degraded ‘DARWIN ROAD’ street nameplate. This must surely be: ‘H.F. SQUIRRELL.’
This name must have been obliterated around 1937 when Walter Edward Tremlett took over the business. It would indicate that the shop was named The "British Flag Stores" by Horace Squirell at some time from 1923 to 1936. Clearly a patriot, Mr Squirrell – had he been trading today – might have had a large Union Flag with his name painted on the wall. Pluralising the word 'Store' might be seen as overselling a corner shop... 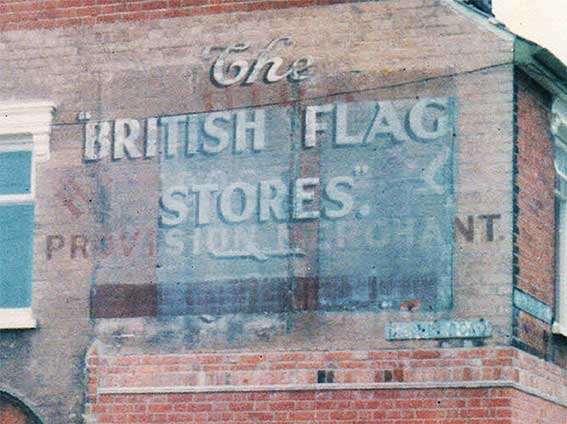 
3. An advertising board was screwed to the wall partially covering the sign; later (probably) two smaller signs (note the blue border paint) were substituted. A photograph of the side of the shop taken in the late 1950s shows these two signs, one for ‘Robin Starch’ shown in a bleached-out photograph taken in the 1950s in a booklet entitled 'Twixt Potteries and California' by M. G. Smith, (proceeds of the sale for the benefit of Clifford Road Primary School). Marian adds: ‘When we moved in to the property it had three addresses – 62 Wellesley Road,  62a Wellesley Road and 2 Darwin Road.  As it was no longer a shop we kept only the Darwin Road address.’ One feature confirmed by the late 1950s photograph is the traditional corner shop entrance (set at 45 degrees) and shop window.
The house today (shown below in a 1987 photograph when the Jordans sold the property) is separated from the Wellesey Road terraced houses by a brick wall; its front door is round the corner, so is now 2 Darwin Road, after decades as '62 Wellesley Road'. 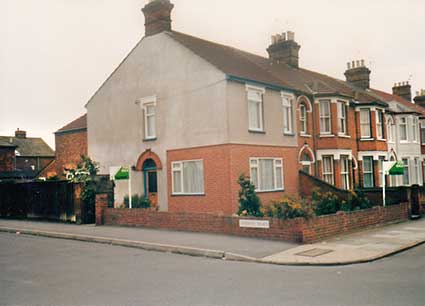 1987 image courtesy Marian Jordan
Note that the rendering of the upper part of the house resulted in the removal of old street nameplates and the installation of the one see here 'DARWIN ROAD', screwed to the low brick wall.

Marian adds: 'My husband Barry has names of some of the previous occupants:-
Mrs N Jordan (his stepmother) who ran it as a shop for a while before closing it. Permission was granted in 1979 to change it from a shop to a dwelling house.
Mr Barker
Mrs Shepherd
In 1908 a William Gardiner and his wife Rebecca (nee Hardwick) lived at 62 Wellesley Road.  She was a distant paternal relative of my husband (2nd great grand aunt) although we had no previous knowledge of this until we began family history research.'
Many thanks to Marian for the information, press cuttings and photographs.
[UPDATE: 1.11.2019: in conducting unrelated research, we came across a full page advertisement in the 1964-1965 Kelly's Directory reading:
'L.W. Gardiner & Son Ltd, Builders
Office and Works DARWIN ROAD, IPSWICH
Phone 55236 – After 6P.M. 41062'
Given the Mr Gardiner, builder, who originally owned the corner shop in 1909, it seems likely that this is a direct descendant, in the same trade and living/trading from a nearby address in Darwin Road.]
The failed bid to sell beer at The British Flag Stores
The first owner of 62 Welleseley Road, William Gardiner, placed an announcement in the local press (East Anglian Daily Times 18.1.1909):

‘I, WILLIAM GARDINER, residing at 62, Wellesley Road, Ipswich, Builder and Shopkeeper, do HEREBY GIVE NOTICE, that it is my intention to apply at the General Annual Licensing Meeting for the said County Borough, to be holden on the 3rd day of February next, for a Licence or Certificate authorising me to apply for and hold an Excise Licence to sell by retail at premises being a house and shop situated at 62, Wellesley Road, aforesaid, and known as ‘The British Flag Stores’ (of which premises I am the occupier and owner), Beer to be consumed off the premises, in pursuance of the Beerhouse Act, 1830, and Acts amending the same.
Given under my hand this 9th day of January 1909.’
This passage indicates that William Gardiner, despite the description in Kelly's listings, 1909 to 1910 ('builder & contractor'), was the person to name the shop 'The British Flag Stores' as early as 1909 and to run it as a shopkeeper. The name stuck for at least thirty years. Given that the Second Boer War started in 1899 and the British Empire was at the height of its powers at the time that Mr Gardiner named his shop, this probably explains is patriotic name.

The ensuing article (Ipswich Evening Star / Daily Herald on 3.3.1909) summarises the hearing and tells us about the shop.
'APPLICATION FOR OFF BEER LICENCE REFUSED.
'Mr. W. Marshall appeared to support the application of William Gardiner, owner of the British Flag Stores, 62, Wellesley Road, for an outdoor beer licence. Mr. W.R. Elliston (instructed by Block and Cullingham) opposed for the licensee of the New Park Stores and Messrs. Tollemache. Mr. A.S. Leighton for the licence holder of the Blooming Fuchsia, and the Colchester Brewery Co., and Mr. A.F. Vulliamy objected on his own behalf.
[This first paragraph indicates what William Gardiner was up against: two existing, local beer outlets  – one an off-sales corner shop and one a nearby public house – along with the powerful brewery companies which supplied them. In addition. an individual might oppose on the grounds of sobriety. The location of the shop the 'New Park Stores' is revealed in the 1905 application to sell beer made by William Flaxman Fisher in 1905; 'situated at the junction of a new road, intended to be called Gladstone Road and Foxhall Road. The most likely candidate is the west corner of the junction (no. 42), once a bicycle shop, now returned to a corner grocery. It's also close to the Alexandra Park, opened 1904.] 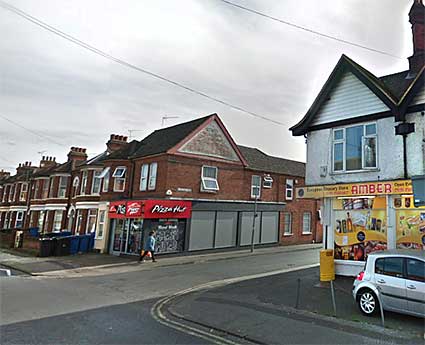 Foxhall Rd/Gladstone Rd junction, 2017
'Mr. Marshall explained that the applicant was the owner and resident occupier of the premises. He had been in the town since 1883. had been a builder for seven years and for the last 15 months had carried on a business as general stores. He was also serving in the Territorial Army as a Drum major. He (Mr. Marshall) believed several of the Bench had viewed the premises and locality, and it appeared only necessary to see the number of new houses around to satisfy them that there was a requirement for a licence. The shop was fifteen ft. by eleven and-a-half ft. Within a radius of 250 yards there had been 250 houses bult within the last three years, and there was room for another 150. Three or four years [ago] the Magistrates had granted a licence to the New Park Stores, the only licence granted in that district for several years. Those stores were 316 yards away, and between the two places were 150 houses. At the corner was the Blooming Fuchsia, 416 yards away, whilst the Lion's Head was over 500 yards away. Mr. Marshall said he admired the consistency and courage with which Mr. Vulliamy attended year after [year] to oppose on his own behalf, but he thought that the Magistrates would take cognisance of the fact that the gentleman was not resident in the locality. He characterised the other opposition as more trade opposition. – Mr. Marshall was not allowed to habd in a memorial [petition] signed by 150 residents in the locality.

'Answering Mr. Rowley Elliston, applicant said that he made a similar application last year, and it was declined. The only difference in the position now was that a few more houses had been built. He did not know that the Park Ale Stores were licensed on the condition that the owners gave up the St. Matthew's Ale Stores. He sold anything from a pound of cheese to a pair of boot-laces – in fact, anything he could get anything out of. He admitted that he would have to sell beer from the same shop he sold his other goods from, but it would be from a different counter.

'Mr. Elliston: What did your premises cost? –Applicant: That is my business.
Mr. Elliston: It is the business of the Bench.
The Bench considered the question a legitimate one, the applicant said that the house cost about £500.
Mr. Vulliamy: Would you sell it to me if I gave you a good price? –Applicant: No, they're no good to you. I don't intend to sell.
Wouldn't you sell to a brewer if they offered you twice the value?  – No, I shouldn't.
Messrs. Harry James Jones and Lucas, residents in the Wellesley Road, gave evidence as to the necessity and convenience of a licence being granted.
Mr. W. Rowley Elliston alluded to the fact that owners of the New Park Stores surrendered the St. Matthew's Ale Stores, which they valued at £1,500, that the position of affairs had not changed from last year when a similar application was refused, double the original value.

'Mr. Vulliamy submitted there was ample accommodation for obtaining beer in the district. He had had experience of licences being granted to those who owned property and the owner selling it after a year for a price about the original value.

'By a majority the Bench refused the application.'

Note also the nearby lost trade sign painted on the side wall of a house on the corner of Foxhall Road and Orwell Road, another former corner shop in the suburbs of Ipswich.
Also the 'Woottons Cure For Corns' sign still existing (but hidden) in Camden Road.