Befitting the largest of England's counties, Yorkshire has wide variety of rural and urban examples of public lettering from previous decades. On the east coast, Filey is a small seaside resort with edge-of-the-building lettering:

'LADIES
GENTLEMENS
HAIRDRESSER'
(some obliterated lettering in the white panel below)


Towards the edge of the town, above the sea is Filey Museum with this curio preserved above an ancient doorway:

with centralised dots either side of the word 'in' and a crossed 'I' in the mysterious 'I MN'. 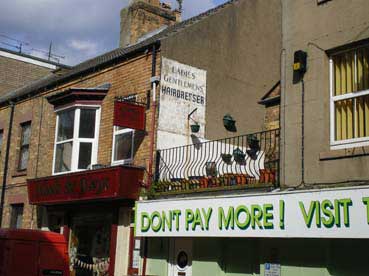 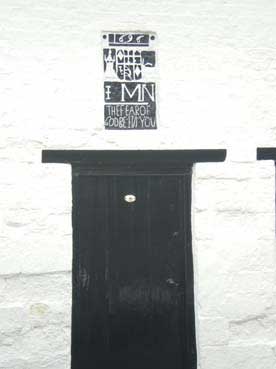 The villages of Willerby and Staxton are a few miles inland and more or less run into one another. The school building bearing the carved stone lettering:

were being refurbished as living accomodation in 2007 when this photograph was taken. The artdeco-style 'sunbursts' in the typically tall windows for Edwardian schools are of interest. 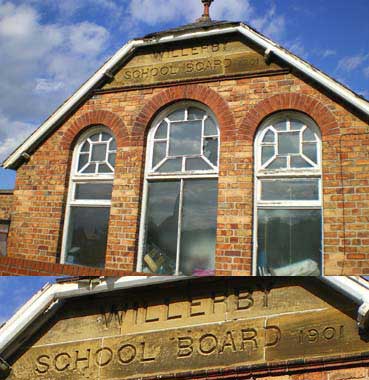 The biggest coastal town in the area is Scarborough and it has excellent examples of lettering.

on a fine stonework frontage which is now a furniture shop. Nearby is:

on the side wall of the old shop, now an estate agent, but in a narrow lane, quite a surprise for such large lettering. The 89th subscriber on the Scarborough Post Office telephone exchange to be connected! 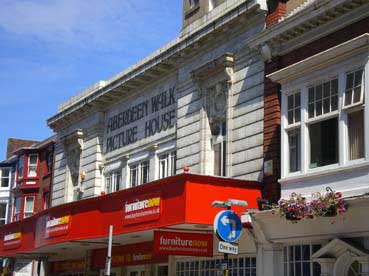 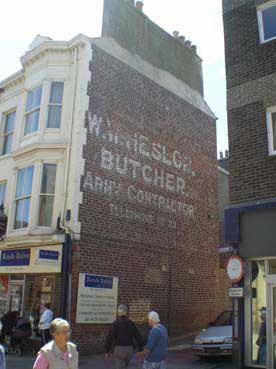 Wander round the neighbouring roads and you find the highly condensed and raked 'GARAGE', also

(the last line reversed out on a black panel with 'for' and 'all' placed one above the other). A company still trading from its lettered address! 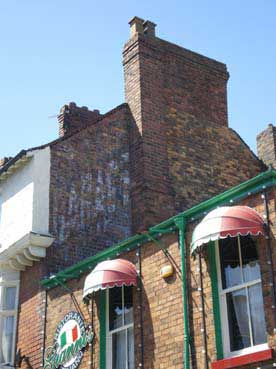 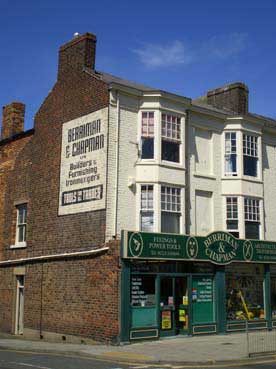 and over the road this enigmatic mix of several layers of signs; we can make out: 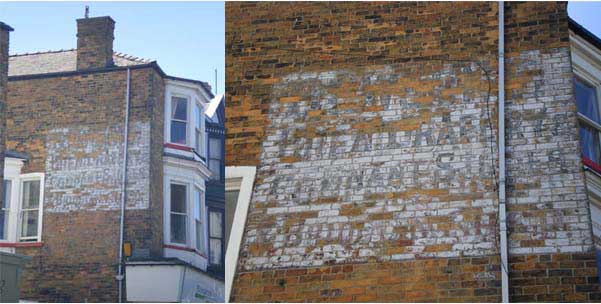 The North Yorkshire Steam Railway famously runs from Pickering to Grosmont and it is at the fomer town that you can find the sign below:

on a stone and brick building which stand about half a mile from the station, along a country road which runs parallel to the line. 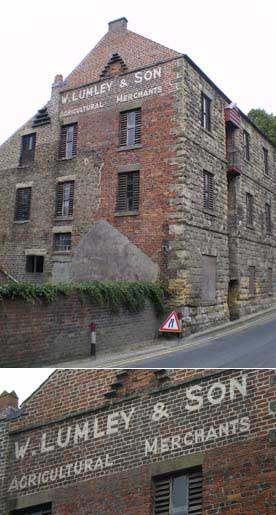 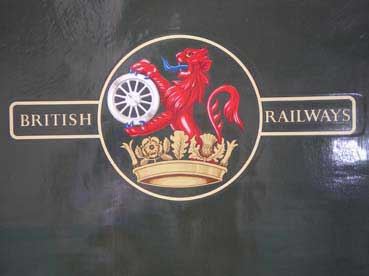 Although not qualifying under the tenuous and abritrary rules of this website, we couldn't resist the fine, restored logo and lettering (above) on one of the N.Y.S.R.'s locomotives:

That's when a livery really was a livery... Taken from the platform near the hand-cranked level crossing gates at Grosmont, a delightful village station. Steam trains now run through to Whitby, which has its own clutch of historic signs. The railway and the River Esk are closely associated from that seaside town to Grosmont, on to Middlesburgh on the Esk Valley line. The small road which runs from Egton village down Limber Hill and into Glaisdale passes the ancient Beggar's Bridge built by Thomas Ferries the son of a local moorland farmer, which is only a few yards away from the railway bridge. The projecting key stone of this arching wonder has the date '1619' carved upon it; needless to say, the road into Glaisdale passes over the river on a modern counterpart. While browsing a book of period photographs of the area, we came accross one of a party of people in and around a carriage on the bridge with the horse which once pulled it dangling upside down in mid air, suspended by the traces and bridle. Horrific, but everyone stayed still long enough to have their photograph taken.