Started in 1965, The Ipswich Transport Museum has the largest collection of transport items in Britain devoted to just one town. Everything was either made or used in and around Ipswich, the county town of Suffolk. This is clearly a logical result of a town steeped in the the industrial revolution, dockland trading and heavy engineering (the museum produces a map of Ipswich showing just some of the many foundries which flourished in the town and are now long gone.
In 1988 the Museum was granted a licence to occupy two thirds of the former Priory Heath Trolleybus Depot, and this enabled the many exhibits to be gathered together under one roof for the first time in their lives. 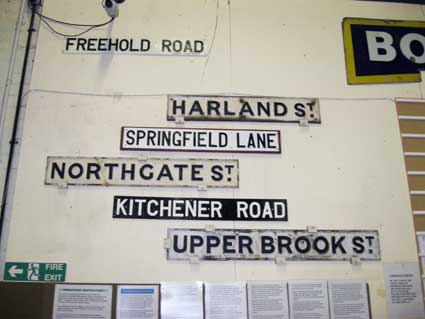 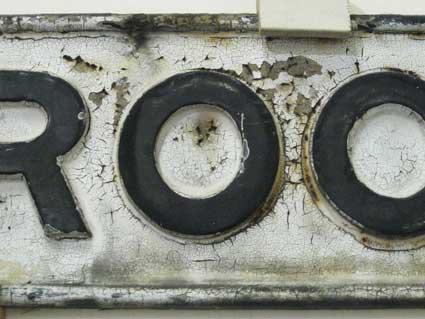 2013 images
From this website's point of view, the Transport Museum has many examples of lettering from past eras; some are original, some are repainted or recreated. Let's start with an array of street name signs which hangs hust inside the entrance. The familiar cast iron plates are interspersed with pressed signs. The 'UPPER BROOK ST' sign at the bottom appears to have been left in the state it was in when removed. The close-up of the 'O' shows the distressed paintwork. 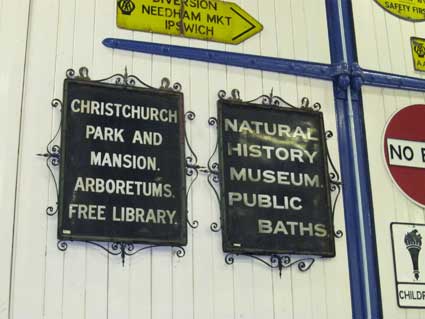 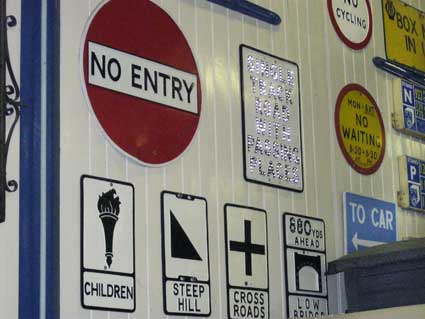 The collection of supporting artefacts and ephemera surrounding the vintage and restored vehicles is very rich. We would love to know where the decorative signs above left were displayed. The first proclaims three venues which are sited in roughly the same area:

It is possible that the Free Library referred to was run for a time from Christchurch Mansion (as were the Schools of Art & Science, which were eventually run from Ipswich Museum), which would make more sense. However, in 1887 the Jubilee of Her Majesty Queen Victoria was celebrated by a public subscription which was applied to the building of the Lending Library which was housed initially at the Victoria Wing of the Ipswich Museum in High Street; eventually it moved to the Carnegie building in Northgate Street in 1924. For a brief history of Ipswich libraries see our Rosehill case study page. The sign to the right is even more puzzling:

The museum referred to may be the original building in Museum Street or the 1880 building in High Street, but we know of no public baths in the vicinity – the nearest would be St Matthews Baths and Baths Hall, perhaps.
The collection of signs above right are full of nostalgia for a time when black and white painted and embossed metal signs sometimes had reflectors in them to make them readabel at night. Hence the sign:

gleaming in the flash photograph. 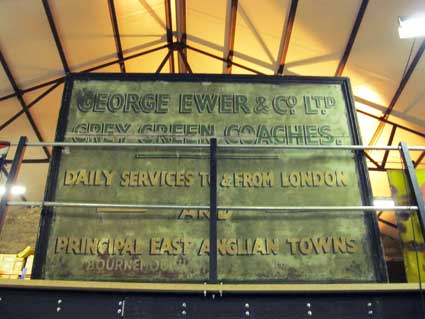 This is a very nice advertisement board which presumably came from the Grey-Green Coach building in Old Foundry Road. The drop-shadow characters read:

The partially cleaned lower left section of the sign reveals the word 'BOURNEMOUTH' in white characters against a maroon background, which suggests that this large sign-board was a re-use of an earlier sign. 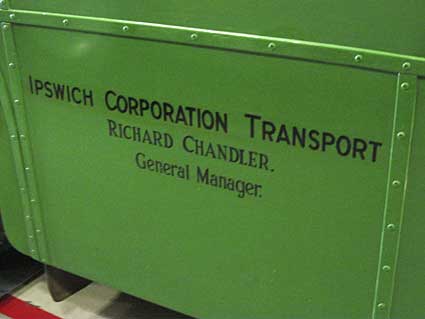 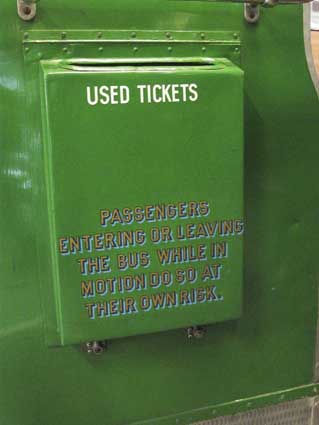 Ipswich Corporation buses must have existed in a world where job security was much greater than today. Several of the buses in the Transport Museum collection feature the General Manager's name on the bodywork. The familiar 'USED TICKETS' box sited on the rear platform of a bus from a time when electric safety doors weren't dreamt of, features the admonition in outlined condensed capitals with a bright blue drop shadow:

'PASSENGERS
ENTERING OR LEAVING
THE BUS WHILE IN
MOTION DO SO AT
THEIR OWN RISK.'

The advertising panels of omnibuses were, as today, a useful source of income from businesses. The Ipswich Co-operative Society chose a very 'transport-style' motif for their advert, below. 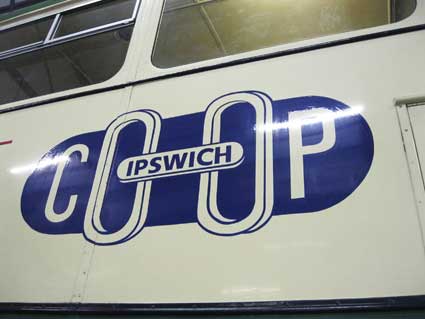 The electric tram shown below is a beautifully restored embodiment of civic pride, bringing back to life the main body and some of the metalwork which had been used as a storage shed. 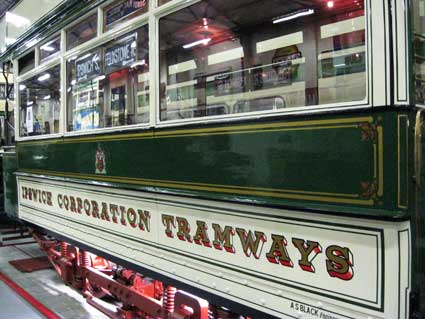 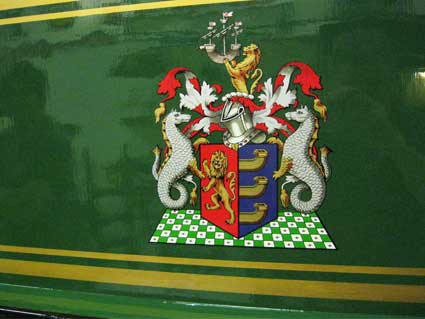 are all restorations, the lettering being recreated by a retired Ipswich Buses craftsman. The former Trolleybus Depot in Cobham Road, Ipswich in which the collection is housed was once home to the painters who would have produced this type of work. The Ipswich Borough coat of arms in the centre of the tram body is probably a transfer, but reminds us the Ipswich is one of the few authorities which keeps control of its public transport.