Rear of 52-54(?) Grimwade Street
A rather blighted area between Grimwade Street and Star Lane (not counting 'Transport House': the UNITE Union offices on the corner) contains the former Portia Engineering works which specialised in wrought iron gates and the old Peter's Ice Cream shop and works. 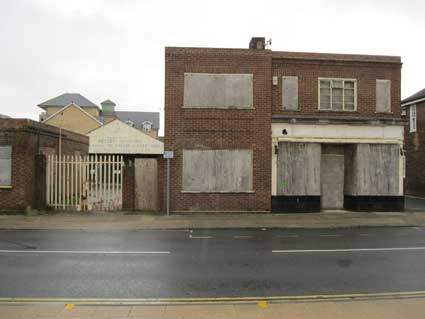 The former Peter's Ice Cream shop at 52-58 Grimwade Street in rectliniear 1930s style, boarded up for many years. The strip above the shop door used to display the letters: 'PETERS'. 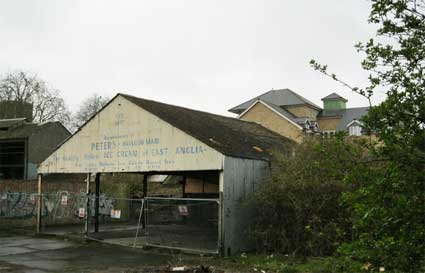 A view over the fencing at the side. From left: tower of St Clement's Church, Portia Engineering building, in the background flats built behind The Foyer on Star Lane. The single span structure is in a sorry state, but still bears the lettering: 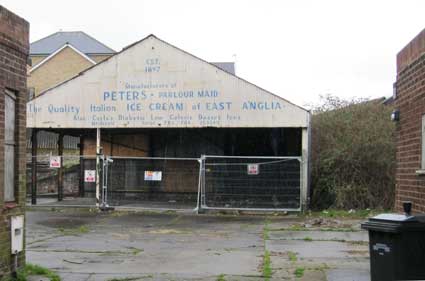 Peters Ice Cream was founded in 1897 by Maria and Napoleone Zagni in the kitchen of a house in Rope Walk. The company is still operating, but now based at Holly Lodge, London Road. These buildings and land were sold in 2012. The story of ice cream manufacture here is one of the, perhaps unlikey, trades to emerge from the large area of poor housing in the Rope Walk area known as 'The Potteries' in the later 19th century. The story is told in Grace, F.: Rags & bones (see Reading List).

From the car park beside the UNITE office (Transport House) next door we see: 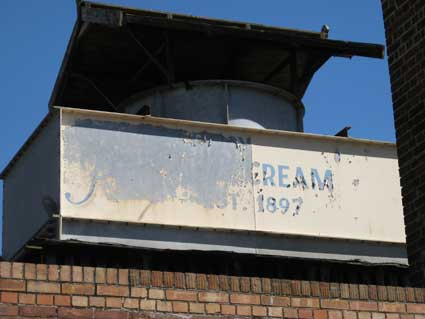 with the cursive 'Peter's' plus the word 'ICE' all but weathered away; 'EST. 1897'
[UPDATE summer 2013: the Peter's site is being worked on and it remains to be seen what will happen to the lettered structures.]

[UPDATE 21.12.2013: A watercolour of Upper Orwell Street by W.J. Leggett (1856-1936) – see Links under the 'Painted wall signs' heading – features The Eagle public house (the taller building which still bears the 'Palmer's Door Mats' sign shown on the Martin & Newby page with 'The Eagle' itself signed on a blank window on the first floor). To the left of the pub entrance is a shop bearing the sign: 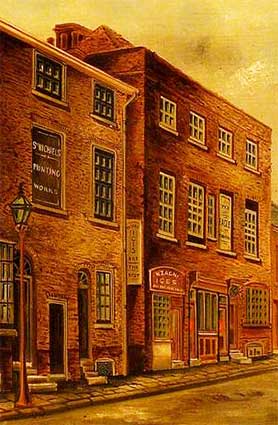 John Bulow-Osborne writes: "The large building ... was then partly occupied by Signor Zagni, who made and sold ice cream.  He later moved his business just around the corner to Grimwade Street, where its derelict premises may still be seen, as 'Peter's Ice Cream'.]