Martin & Newby's, 4-8 Fore Street
An old established business, suffering closure due to the rise of warehouse DIY outlets in the town, provided customer service and the availability of small quantities of screws, other fitments, hardware, electrical goods, paints and tools. Martin and Newby proclaimed their business on manifold signs, the company establishment date of 1873 clearly shown. While these are all bolt-on signs on a linked string of individual shop premises which ostensibly fall outside the brief of this website, the architectural detail at the top of the building (shown below) qualifies it. Standing at the south-west corner of the Orwell Place/Upper Orwell Street/Eagle Street/Fore Street crossroads, that corner building was once a pub, as were all the other corner premises. The Bull's Head was at south-west, The Eclipse at north-west, The Shoulder of Mutton at north-east and The Spread Eagle at south-east – the only surviving pub here. 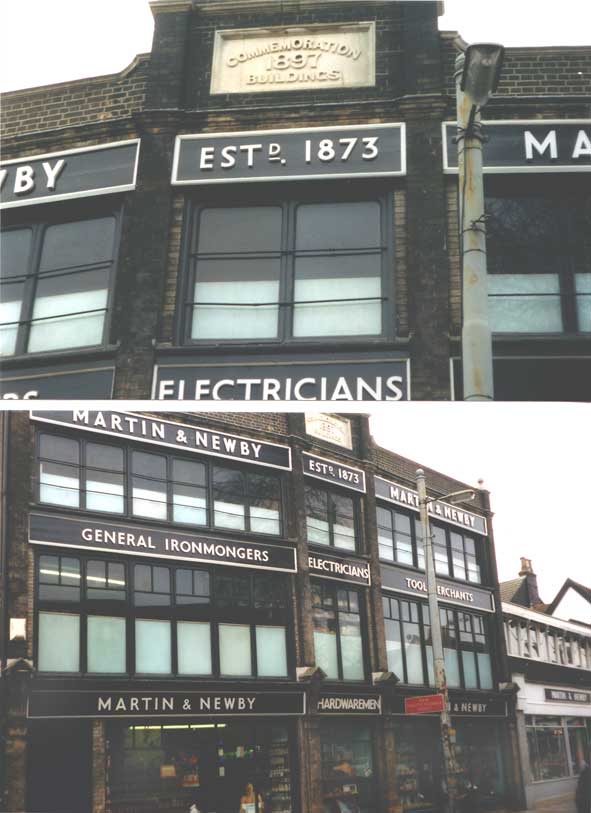 The first word curves over the centralised date, the shole contained in a rectangular recessed frame. The date 1897 coincides with Queen Victoria's Diamond Jubilee. We wonder where Martin and Newby was based during the first twenty four years of its existence. Perhaps it was in one of the smaller premises which made up the whole business by the late 20th century.
Beneath the building name we can read (in a Gill Sans-type font):

Across the whole agglomeration of buildings there were, in its heyday, no less than eigh repetitons of the company names, icluding the italic serif'd capitals over the electrical shop, so redolent of the 1950s. Below: the shop frontages on Orwell Place (formerly Stepples Street) and the side entrance on Fore Street, photographed shortly before the business closed its doors for the last time in June, 2004. 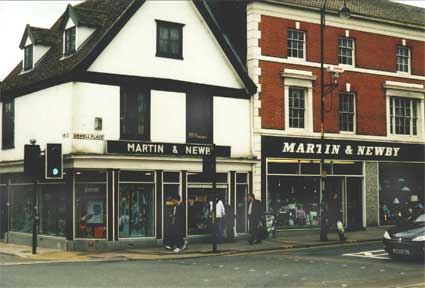 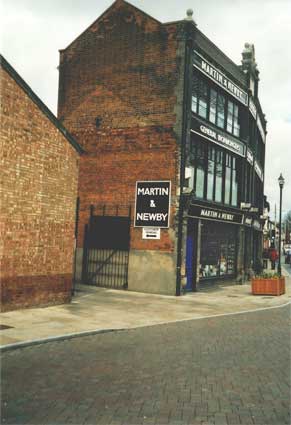 [UPDATE March, 2005: during a snow shower (see also Unicorn update below), we see the sad sight of Martin & Newby bereft of its midriff. The more modern shop section demolished down to the basement and netted off from the pavement was presumably unlisted, as were the warehouses behind and to the left, also gone. It's doubtful that any new retailer will display so proudly the word 'HARDWAREMEN'.] 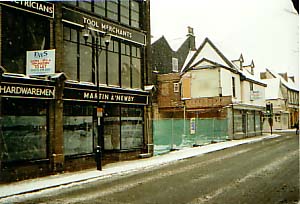 2005 image
By 2012, the shop premises are patchily occupied by retailers and the lower signs removed. To the right is the infill building with dormer windows above; to the left can be glimpsed the new flat block built in what was once the M&N warehouses and car park. 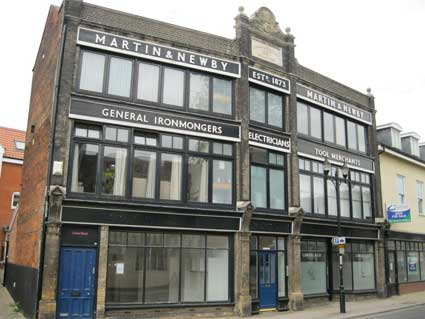 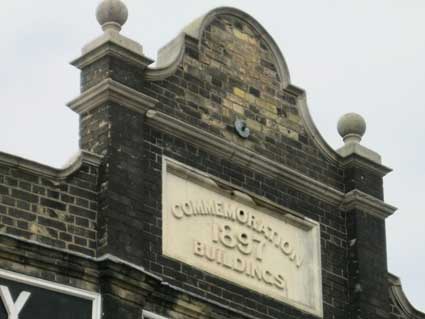 2012 images
The Ipswich Society Newsletter July 2004 carried a fascinating article by Ruth Serjeant: 'Goodbye to all that'. A tour of the linked buildings in Fore Street and Orwell Place was conducted by Michael Atkinson, the person who had to decide to close down the business. A bewildering series of rooms, passages, cellars and attics were explored through the range of different buidings, each with their own staircases. Some were offices and workshops but most were shelved out as storage for thousands of boxes of stock. It was noted that some of the boxes were labelled: 'washing line pulleys', 'Victorian ring door knobs',  'chain saw files, all sizes, same price'. There was evidence in the large store-room at the rear of its use as a warehouse for Ellis the fruiterers, whose premises in Orwell Place the company had acquired during 1950s and 1960s expansion. A small room at one end had rows of hooks in the ceiling which were once used to hang hands of bananas to ripen. It was still referred to as 'the banana room'.

"A small portion of the walling at the end of this building is made of flint stones, and this has raised the archeological question of whether this southern boundary of the site is related to the adjacent buildings of Blackfriars uncovered over recent years. Further flint walling in cellars elsewhere on the site has been found, whether as original or re-cycled remains to be seen."

In the 1897 Commemoration Buildings an internal fire escape was observed: a vertical ladder straight down to the ground from a small trap door in the floor. The large upper storey windows of this building finish literally at floor level with no sill. Old photographs show that they were use to display goods with the windows open although it is not reported who might have been able to see them up there. The expansion of the business already noted also included purchase of Fox, the newsagents, along Fore Street and the Bull Inn which stood on the corner. In fact there were public houses on all four corners of this crossroads at one time; the Spread Eagle is the only one which remains in business. Evidence of the living accomodation above the Bull Inn was seen with 1950s wallpaper and paintwork, plus wall cubboards and cast iron fireplaces from an earlier period. The cellar below the former inn is very low and those entering had to stoop all the while they were looking at the remains of the 'beer cask pavement' along the floor on which barrels would be placed to be tapped with an open runnel to take the drips. I another cellar an even lower ceiling made it hard to see how anyone could have operated the black iron cooking range which was still in situ: perhaps the ceiling of this 'below stairs' living area had been higher at some time.

The Board Room of Martin & Newby had old photographs, a plan of the Bull Inn before the takeover and many of the firm's business ledgers (which with other archives were subsequently handed on to Suffolk Record Office). In its own way, a great loss as a time capsule of Ipswich life. At least much of the building still stands and the black and white signs are largely intact as a remembrance. 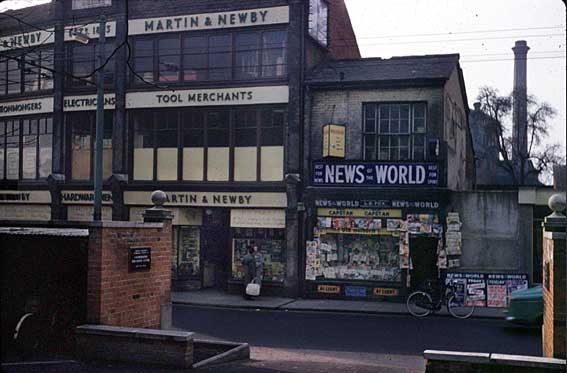 Photograph courtesy The Ipswich Society
Above: this remarkable photograph from The Ipswich Society's Flickr collection of images (see Links) shows the much-lettered Martin & Newby's shop – the lettered panels in the negative form to that seen today. The view is from the entrance to the Co-operative Education Centre across Fore Street with a green, metal pole to the left supporting the power lines for the trolley buses. Instead of the string of linked Martin & Newby shops up to and round the corner into Orwell Place to which many were familar in the late twentieth century, we see the newsagent's business of L.B. Fox: an orgy of displayed periodicals and advertising signs. Perhaps ironically, the largest sign promotes that most salacious of Sunday papers The News of the World, which Rupert Murdoch shut down in a sea of phone-hacking scandals in 2011. One feature of interest in the photograph is the rear view of Unicorn Brewery (fronting Foundation Street), which answers one question about the curious architecture: at the time of the photograph the brewery boasted a tall, substantial chimney. This would explain the remaining octagonal white-brick feature behind the building. 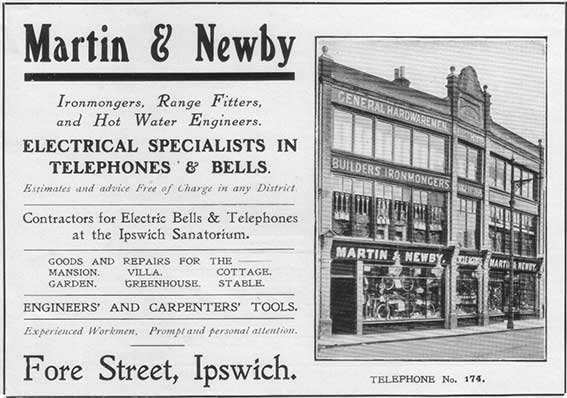 1912 advertisement
The printed advertisement shown above comes from an E.A.D.T. Souvenir of the King Edward Memorial Sanatorium 'Ipswich in 1912'. The frontage lettering on Martin & Newby's at that time advertised somewhat different products and services:

Although many will recall with affection the linked shops of Martin & Newby, they may not know that the company were contractors providing electric bells and telephones (among other things) for the new Sanatorium in 1912, otherwise Foxhall Hospital, let alone acting as cycle agents in direct competition with Sneezum's, just a few yards down Fore Street. See our Hospitals page for more on this. Incidentally, note the row of spades hanging in front of the first storey windows to the left. Did they come down and get re-hung every day?

For a 1980s view of the Orwell Place elevation of the Martin & Newby shop, see our Edme Bakery page under '8 Orwell Place'.


Meremayd (former inn), Fore Street
Just across the road from the M&N vehicular entrance above: the carved wood 'MEREMAYD' on the front wall of 17 Fore Street can be seen. The Mermaid public house was closed at an indeterminate date and is now in residential use. It is probably a very ancient pub; few records have been found and it doesn't appear on OS maps as far back as 1884. 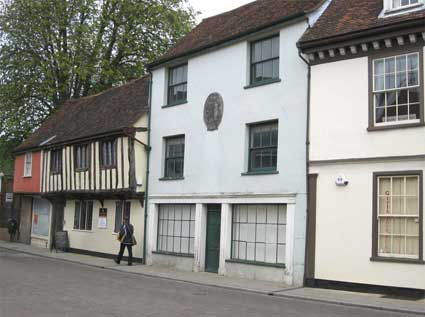 2012 images
It would be very tempting to think that this carved wooden cameo is ancient. A look at the definition and lack of weathering of the carving may suggest otherwise. 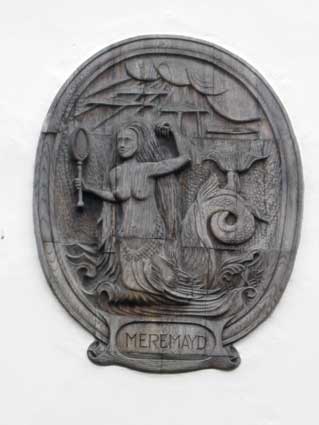 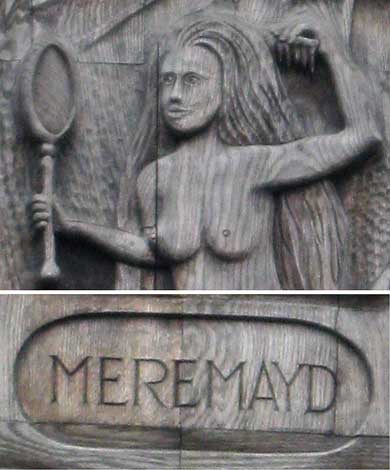 The Public sculpture in Norfolk & Suffolk database (see Links) cites a carved signature and date: 'M. Hardy, (19)74'. Mermaids were always shown with a mirror and comb, signs of luxury and vanity, in medieval bestiaries and misericords. Here her head and hair are 'modern'. It is unclear whether this is a reworking of a traditional design or based on an earlier sign.
Palmer's Door Mats, 63 Upper Orwell Street
Upper Orwell Street (formerly 'The Wash' to mark the almost constant flows of water from the springs around Christchurch Park, also Spring Road via Majors Corner down to the Wet Dock) has been ill-served by 'progress' in recent years. Planning blight has left many shops empty and boarded up. The Baipo Restaurant occupies a high building which is home to one of the most obscure advertising sites in town (enhanced but barely readable on this photograph):- 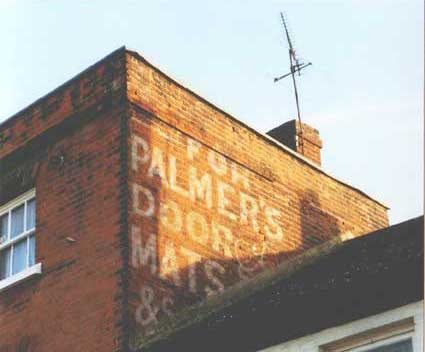 The first close-up image above is from 2012 (sadly, a TV satellite dish now covers the ampersand.) This capital lettering fits the triangular shape left by the adjoining roof. There is a decorative flourish rising up from the roof level next to the word 'Door' also above the 'ME' of 'Palmer's' the lower part of the word 'FOR'. Clearly there was a shop or dealer name above this; perhaps the upper wall was remodelled - or at least cleaned. The following ampersand is puzzling: unless it is '&c.' which stands for 'et cetera', it can only mean that the pitched roof next door was built at a later date obliterating the lettering. This does seem unlikely given the way in which the advertisement is laid out in the available space. See Links for the Lost Pubs Project which has another view of this building, revealed as the former Eagle Tavern - not to be confused with the nearby (and still trading)  Spread Eagle - which was at 61-63 Upper Brook Street. Suffolk CAMRA (see Links) show this pub as opening in 1851 and closing in 1903.

For a period painting of The Eagle building (probably Edwardian), see our Peter's Ice Cream page.

See The Unicorn for information about the former hotel and brewery a few doors along from Martin & Newby on Orwell Place/Foundation Street.