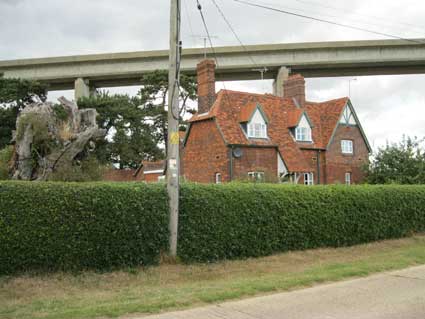 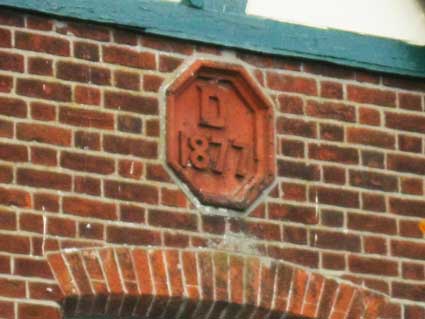 Standing at the junction of the Freston foreshore road and the track up to the Suffolk Food Hall (and dominated by the nearby Orwell Bridge) is this attractive red brick house with the octangonal panel: 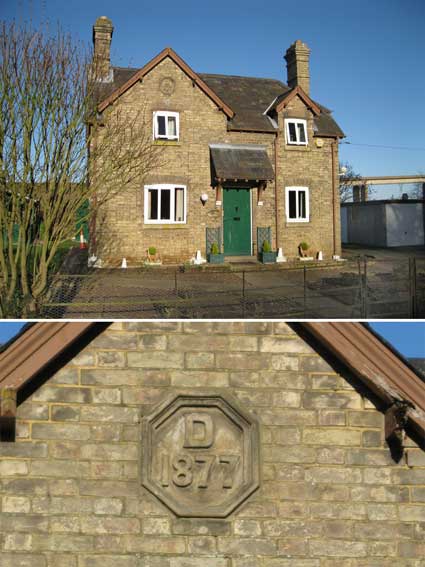 2013 images
Standing alone just above the Suffolk Food Hall is a second Wherstead Hall Lodge in white brick which bears the large medallion:

We've not seen this form of 'Anno Domini' ("The year of Our Lord') before. The Lodge is some distance from the 19th century Hall which has played home to electricity companies and the East of England Co-op. Push on up the concrete farm track with the roar and hiss of the A14 traffic over to the right and one comes across the lychgate of St Mary's Wherstead. 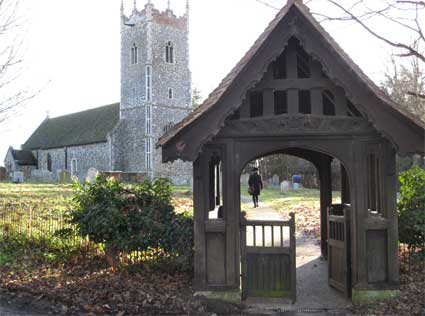 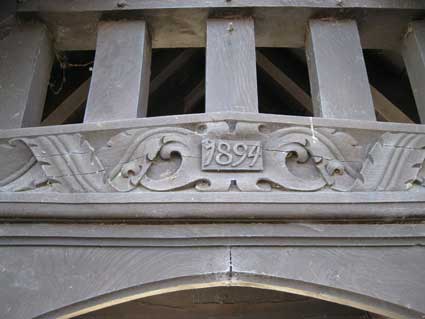 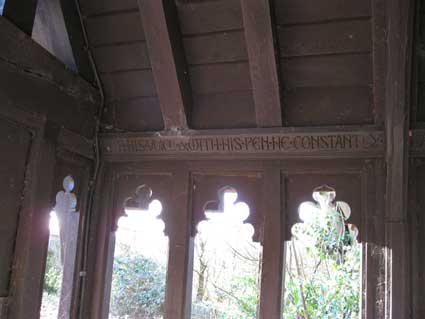 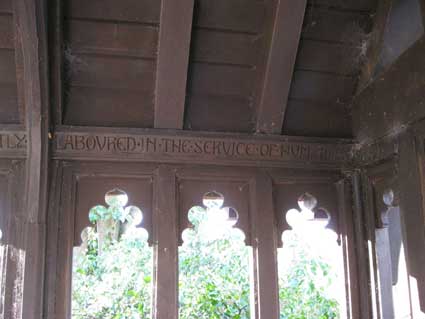 Inside, among the cobwebs and putative birds' nests, the carved letters are on bothe sides of the gate. 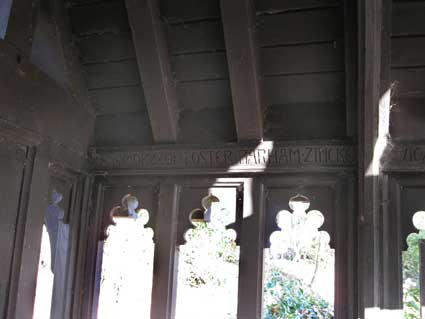 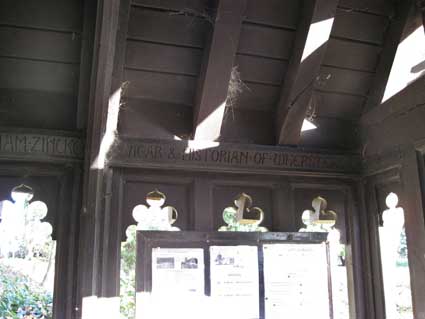 ' IN MEMORY OF FOSTER BARHAM ZINCKE ... VICAR & HISTORIAN OF WHERSTEAD
WITH HIS VOICE & WITH HIS PEN HE CONSTANTLY ... LABOURED IN THE SERVICE OF HUMANITY' 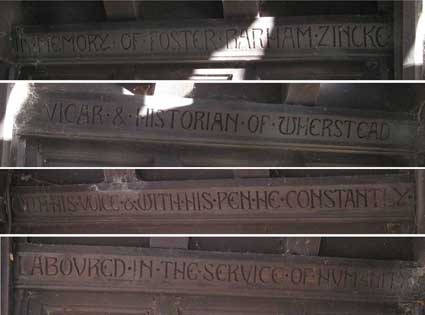 Rev. Foster Barham Zincke is buried in the churchyard and on his tombstone is written: ‘An earnest friend of social and moral progress.’ He certainly was a remarkable man and with his royal connections, he could have held high office. However, his instincts led him to improve the lot and education of the working classes. His ministry at Wherstead covered 52 years, 1841-93, six years as curate, 46 as vicar.  He was also chaplain to Queen Victoria. Among other books he wrote, The Days of My Years and Wherstead Territorial and Manorial. Although the latter has over 400 pages he modestly sub-titled it ‘Some materials for its history.’  Few villages as small as Wherstead have been so well chronicled. A fascinating East Anglian Magazine article on the man can be found at Wherstead.com (see Links)

The church itself is well cared-for and superficially the most striking things are the three huge lion-headed gargoyles with their haunting eyes. The church was almost entirely rebuilt in the 19th century, and no medieval feature survives except for a single glass pane depicting St Edmund, East Anglia's patron Saint. Simon's Suffolk Churches (see Links) says of this place: "The architect was Richard Phipson, who restored the 15th Century tower and rebuilt the nave and chancel, retaining the Norman south doorway. Big lions along the roofline recall his gargoyles at the town centre St Mary le Tower. Stepping inside, the interior is almost entirely 19th century, but of high quality, a testament to the commitment and money of the Dashwood family of Wherstead Hall." 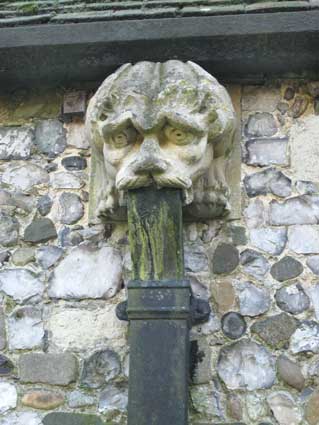 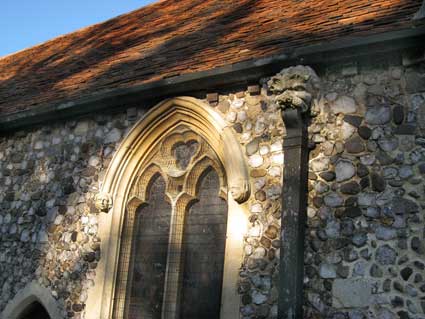 The graveyard is screened by trees with a wonderful panoramic view across the fields of the Orwell valley, the Piper's Vale end of the Orwell Bridge to the left and Butterman's Bay to the right. 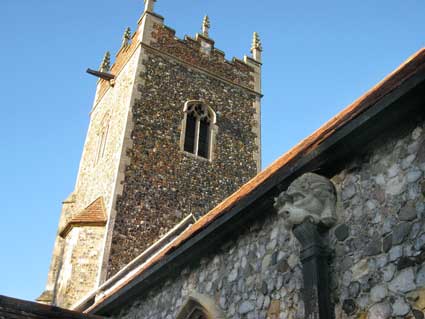 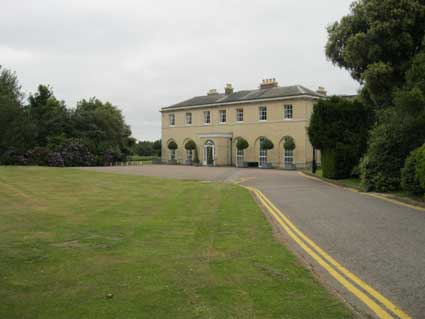 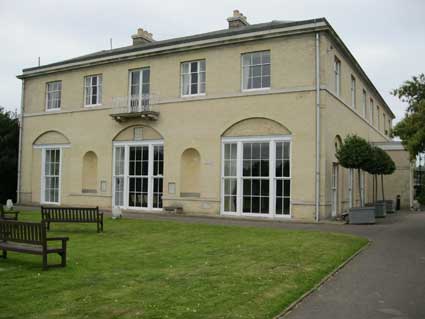 Formerly headquarters for Eastern Electricity and something called 'e.on', by 2013 this is the HQ of East of England Co-op. No lettering found on this original part of the mansion. 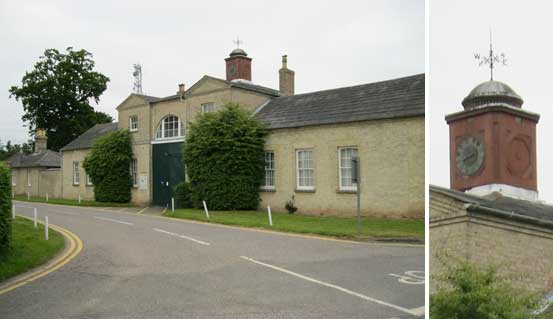 The stable block with roman numeralled clock face and lettered weather vane above.

See our Bostock Road page for a possible link from Dashwood's Villas to 19th/20th century owner of the estate Charles Dashwood.