The Ipswich & Suffolk Freehold Land Society ('F.L.S.') had a dramatic effect on housing in late Victorian and Edwardian Ipswich. One feature of the early housing developments of the Ipswich area by the F.L.S. is the 'set back' house where a modest pair of semi-detached cottages were erected in the middle of a long piece of land which could be used as smallholdings to make a livelihood by the first residents.

'Garden Farms'
On the outer stretch of Felixstowe Road (past the Royal Oak) there are a number of set-back houses still standing, all built around by other housing since they were originally erected. 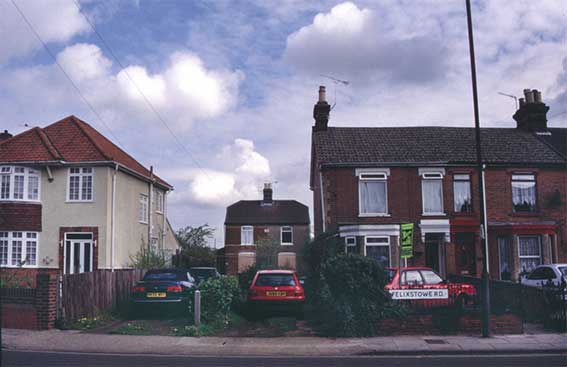 Photo courtesy The Ipswich Society Image Archive
First of all, though, here is one that got away in the 1990s: Derby Villas. The 'Garden Farms' in the centre already have boarded-up ground floor windows by this date. The house on the left and set-back cottages behind were all demolished in 2001 to create Hines Road which accesses the car park for Co-op Rosehill supermarket, the adjacent Aldi store and new housing on the former, extensive Co-op dairy site. The terrace on the right (no. 217 bearing the same 'Felixstowe Road' street nameplate in the same position) still stands in 2016.

2016
Above: a more recent view showing the houses from no. 217 Felixstowe Road eastwards (note the street nameplate on the railings), with other buildings cleared away for retail development with housing behind.

Writing in 1989 in The way we went (see Reading list), Muriel Clegg tells us:
"A large estate of nearly 74 acres next to the Cauldwell Hall estate was bought shortly before 1880. Ten acres were allotted to shareholders and built upon, 17 acres were sold to the Corporation to add to the grounds of the [St Clement's] Asylum, leaving 47 acres fronting Felixstowe Road. The most distant part was used in a manner somewhat remiscent of California. The area was divided into eight two-acre plots which were to be 'garden farms'. It was not quite 'two acres and a cow' but the idea of at least partial self-sufficiency was there. In the middle of each plot a pair of six-roomed semi-detached cottages was built, provided with wells and fenced in. The cottages were built in pairs to provide neighbourly help in time of trouble and were in the middle of the plots in order to make cultivation easier. There was also the thought that one daythe frontages to Felixstowe Road might prove valuable. This, of course, has happened and all the frontages have been built on. Six of the original eight pairs have survived, each with its access to Felixstowe Road, but there are no garden farms now. One pair was demolished c.1983 and another more recently.
A similar scheme was carried out in Bramford Road in 1897 where eight houses were built in the centre of large market gardens, each having nearly an acre of land."

[UPDATE 19.10.2016: The Ipswich Building Society headquarters offices on Ransomes Europark display an interesting exhibit in the foyer. We are pleased to show it here – the plaque from the Garden Farm lost when Hines Road was built (see top of page) and information panel with plan. The plaque bears the scars of mistreatment and, perhaps, a troublesome removal from the wall, to be saved by Ipswich Building Society as a symbol of their history.]

This was the obvious name for the third pair, with Derby Road nearby. Again we note the missing full stop after the 'S' of 'F.L.S'. 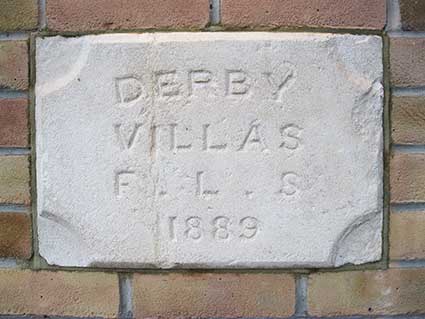 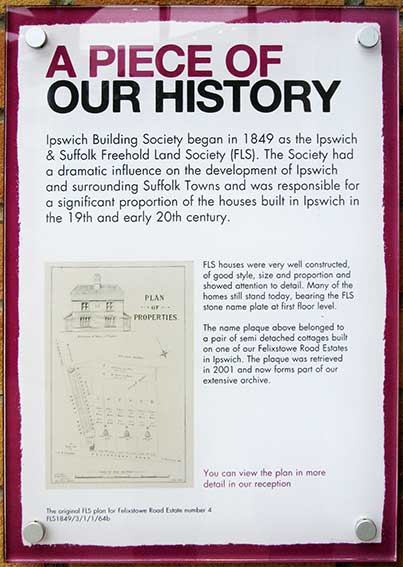 The blow-up of the illustration and plan is revealing. Derby Road is at the left with 'Board Schools' labelled at the site of today's Rosehill Primary School; also the position of The Royal Oak Inn is shown at the lower left. Much smaller plots for terraced houses are shown on the Derby Road stretch north of the corner shop.
The corner property is labelled ‘Stanley House’. It is the subject of the First Ballot of F.L.S. 'Felixstowe Road and Derby Road Properties' dated July 20 1889. It is described as: 'recently thoroughly repaired ... with Yard, Stable, Sheds, Garden situate at the corner of Derby and Felixstowe Roads'. Looking at the L-shaped building on the corner today, there is no sign of a ’Stanley House’ plaque. Indeed, it seems highly likely that the original small building was replaced by the current one. This later corner property opposite The Royal Oak we feature on our Felixstowe Road page because of the 'Family Grocer' and fugitive 'P.J. Prentice' lettering. The infilling around the front of Garden Farms was expected and planned for in their design. Then, working westwards, come ‘Dorset Villas’, ‘Stafford Villas’ and ‘Derby Villas’. We know that Derby Villas was demolished during the retail development and the making of Hines Road (shown at the top of this page), so all six plots and houses are gone from this area and we can account for their original positions.
Each semi-detached Garden Farm and plot is labelled on the plan: “Second Ballot. 1 Acre and House. Price £290’
At the bottom:-
‘J.S. Corder     Frank Brown                                Surveyors     Thorofare Ipswich                                    July 1889’
John Shewell Corder, the well-known Ipswich architect and illustrator, was responsible for the Scarborow Art Nouveau shop in Dial Lane as well as a number of landmark public houses whose design reflected that of the Tollemache's Helmingham Hall, now known as the 'Tolly Follies'. They include The Golf Hotel on Foxhall Road, The Cricketers on Crown Street, The Suffolk Punch in Norwich Road; The Waveney Arms on Bramford Road closed in 1994 and stood empty for a number of years, before being demolished for housing (today we may well have insisted on the saving of this fine building and incorporationg the housing around it). 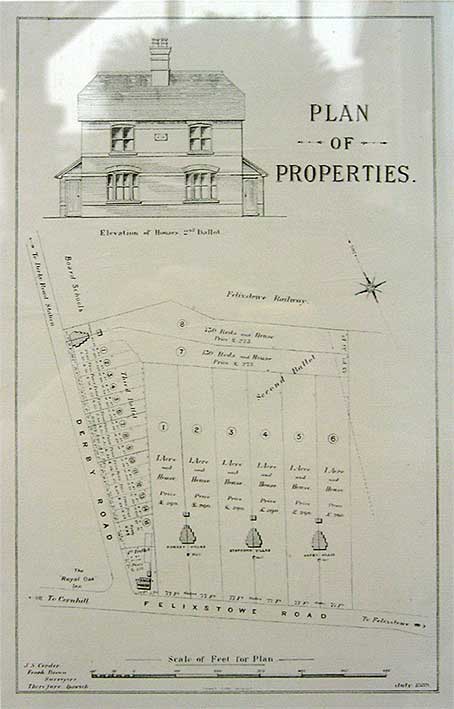 The survivors
We have found five surviving Garden Farm pais of cottages.
A. Oxford Villas 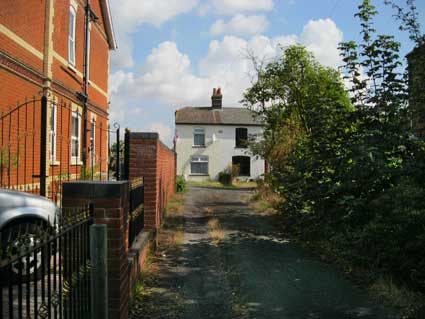 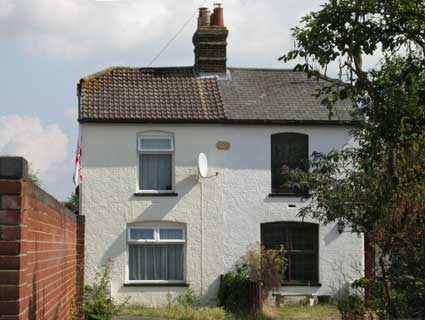 Between numbers 227 and 235 Felixstowe Road is the track down to Oxford Villas. 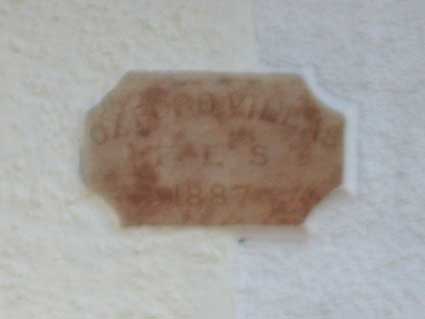 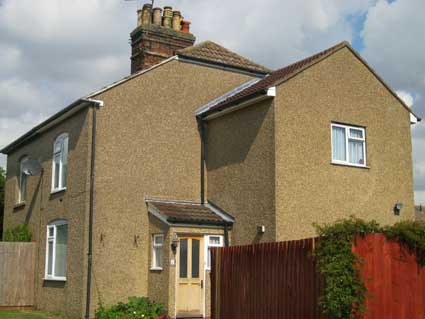 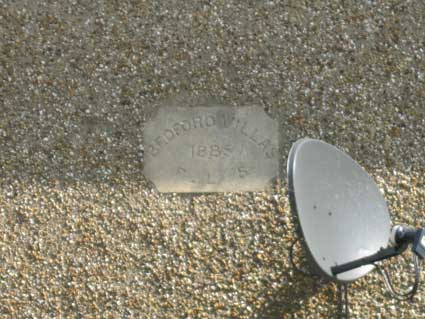 Very well-hidden behind the newer  dwellings to the left, at number 5 Malvern Close is another pair of set back houses. Number 5 has had an extension added; the roughcast rendering blends it with the rest of the house. 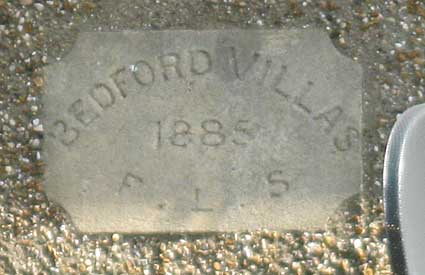 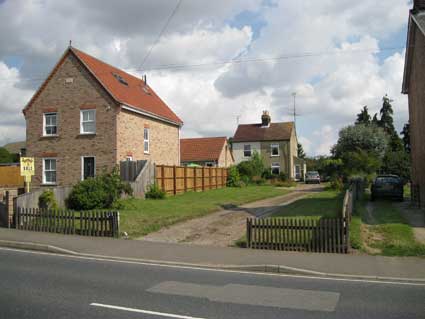 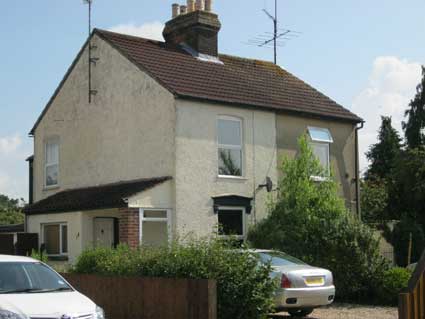 Accessed by the much more recently cut through Malvern Close, the whitewashed house of this pair is numbered 12. In 2014 these set back houses have recently had a new dwelling built in the original front garden of number 12. You can still see the smalholding strip of land (the front garden and driveway) leading up to its neighbour from Felixstowe Road. 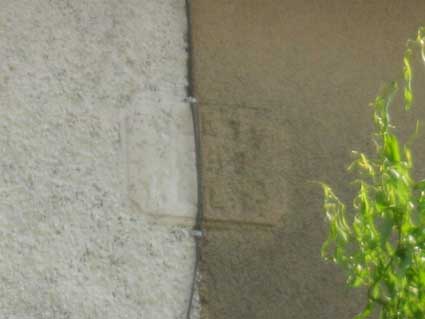 We were pretty sure that this degraded house name plaque read: 'HERON 1884 VILLAS'.
This was speculative and was based on the number of characters in the upper word (five). It certainly doesn't match the county town names on the other two houses: no county town seems to fit here.
[UPDATE 23.12.2014: "Currently at work for Ipswich Building Society & just had occasion to look at your website. Small correction for you on Felixstowe Road FLS Houses page. You speculate worn plaque reads Heron Villas. Good guess but our records show that it is actually Devon Villas. Margaret Hancock." Our thanks to Margaret, the Ipswich Building Society archivist (see our FLS page), for this correction.] 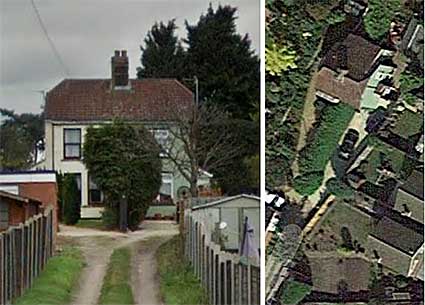 Above: up a long driveway, between 381 and 387 Felixstowe Road. The aerial view (below) shows the relationship between these two Garden Farms: 'NORFOLK VILLAS, 1883' (see the numbered notes below) is boxed in blue. 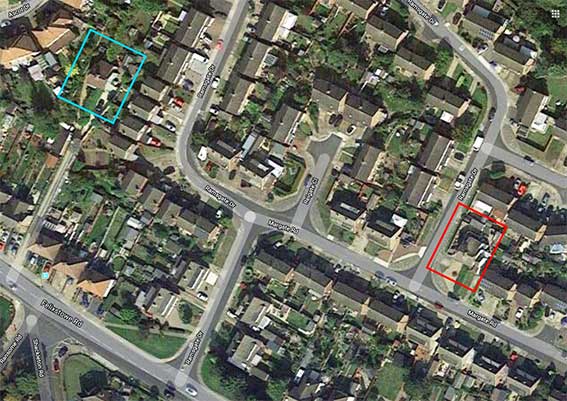 E. Essex Villas
In spring 2020, John Norman drew our attention to the last surviving Garden Farm in the row.

Above: along Ramsgate Drive, surrounded by modern housing, its driveway and small holding lost. This turned out to be 'ESSEX VILLAS, 1883' – it  is boxed in red in the aerial view (above) – although the plaque is unclear (see the numbered notes below).

[UPDATE 8.6.2020.
Having consulted the Ipswich Building Society (IBS) archivist, we tried to string together the FLS sketch plans of the four sites from Derby Road eastwards to the bridge over the Felixstowe railway branch. In checking them against Borin Van Loon’s ‘FLS developments map from 1866 to 1934’ (see our Freehold Land Society page) the linked plans are a little fatter than the actual shape of the location, but we must allow for the site plans varying a bit. The two reference points are the Derby Road/Felixstowe Road junction and the easterly point of the whole plot. The line of Felixstowe Road is more or less accurate. 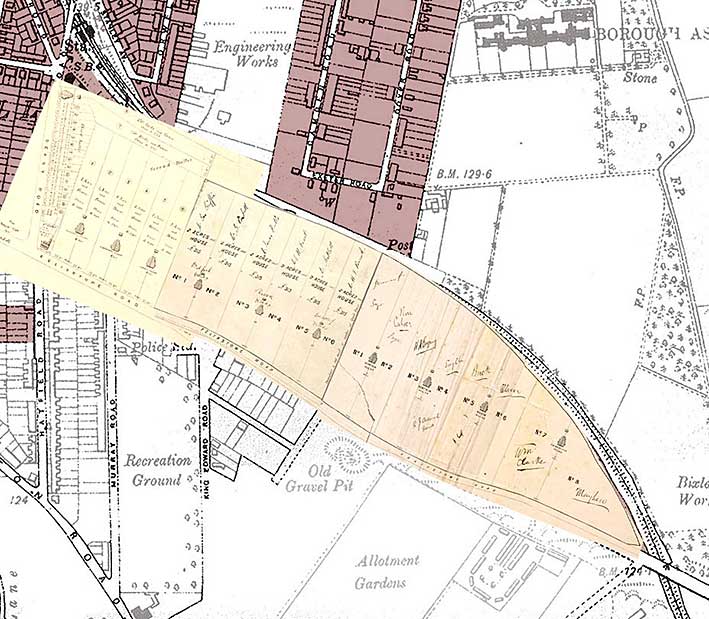 Assembled FLS site plans of Garden Farms overlaid on a detail of the Ipswich Building Society map of all FLS housing developments. [Images courtesy Ipswich Building Society]
Two things are of note. First that the line of Garden Farms was rigidly adhered to – perhaps there is some slight variance in the group close to Derby Road – so that the most easterly (Cambridge Villas) is quite close to the railway line cutting. Secondly and quite surprisingly that the list below shows thirteen pairs originally planned by the FLS. This is quite a difference to the 'eight two-acre plots' stated by Muriel Clegg in 1989 in the quotation from The way we went towards the top of this page. However, the pieced-together plans of the sites (above), depict ten pairs with their names either printed or hand-written. Clearly more research is required. Drawing together the information provided by the IBS archivist Margaret Hancock (to whom our grateful thanks), here is a draft list.:- ‘Garden Farms’ (listed in named pairs from Derby Road eastwards) *Dorset Villas *Stafford   “ Derby      “            Oxford Villas 1887     *Durham  “        *Lincoln    “        Bedford   “     1885 Devon     “      1884 *Surrey    “ running up to the easternmost point: Suffolk Villas Norfolk    “     1883 Essex      “       1883 *Cambridge Villas [items marked*: locations not yet identified] Based on assumptions, the suggestion is that (from west to east):-
1.  ‘Derby Villas, 1889’ was demolished by the Ipswich Co-op to open up the Rosehill retail area and IBS have the retrieved plaque in the entrance hall at their Freehold House headquarters.
2.  We know that 'Oxford Villas 1887' is the last remaining garden farm to the west (between 227 and 235 Felixstowe Road).
– We don't know what happened to Durham and Lincoln Villas at present. 3.  There are two pairs on either side of Malvern Close; 5 and 7 Malvern Close is 'Bedford Villas, 1885' now shorn of its driveway.
4.  The plaque on 12 Malvern Close/321 Felixstowe Road is 'Devon Villas, 1884'; the latter still has its driveway.
5.  The one in the middle of the Ascot Drive ring of modern residential roads was demolished (Suffolk Villas).
6.  The pair between 381 and 387 Felixstowe Road, is Norfolk Villas; this pair retains its long driveway and some of its original smallholding land.
7.  The one recently spotted by John Norman, Chair of The Ipswich Society (115 Ramsgate Drive and 9 Margate Road) is Essex Villas); the FLS plaque, though visible, is unreadable, we think. 8.  The most easterly (Cambridge Villas) was demolished to make way for the north-eastern part of Ramsgate Drive. The original FLS site plans don’t match up exactly, but enough to convince that the above is a reasonable assumption.]


For another illustration and partial map of the Garden Farms see our California page under the heading "Ipswich Borough's 'Character Area'".

See our Bramford Road page for other F.L.S. houses.