Monument to the Ipswich Martyrs


These photographs were taken on Sunday 6 July 2013 at the famous, annual 'Ipswich Music In The Park' event during a heatwave. 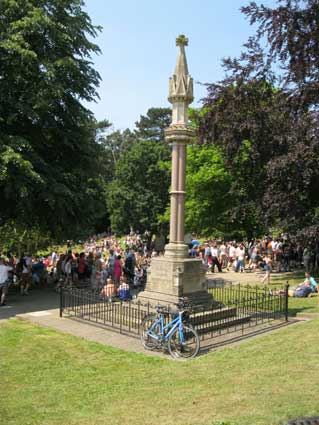 2013 images
On three sides of the collar of the column:
'THE NOBLE ARMY … OF MARTYRS … PRAISE THEE' 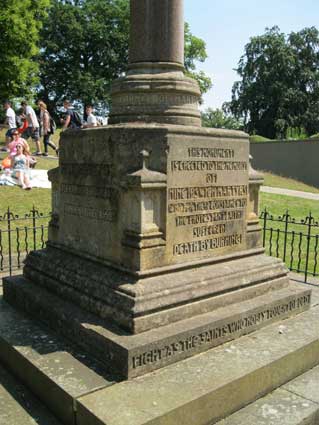 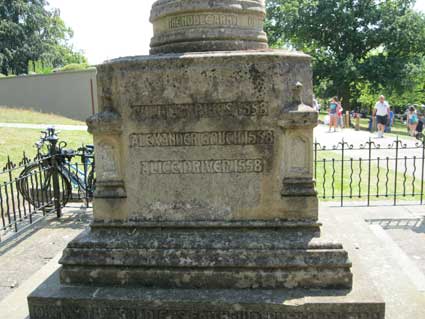 'OH MAY THY SOLDIERS FAITHFUL, TRUE AND BOLD …
FIGHT AS THE SAINTS WHO NOBLY FOUGHT OF OLD …
AND WIN WITH THEM THE VICTORS CROWN OF GOLD …
ALLELUIA' 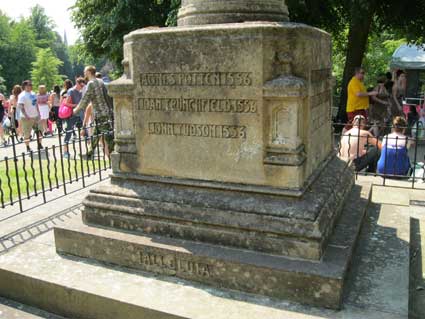 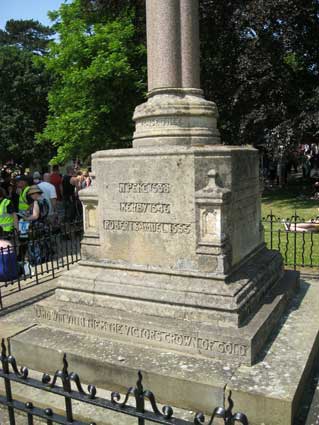 On the four faces of the monument: 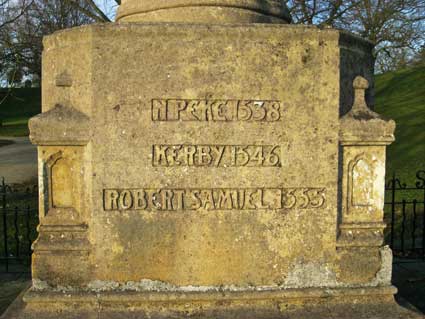 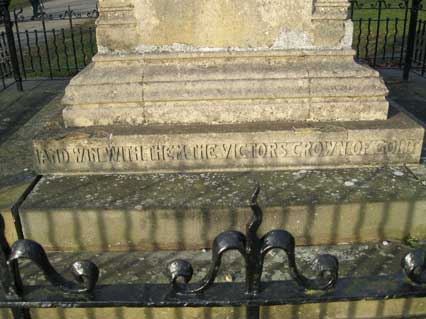 Note the lack of Christian name of the martyr called 'Kerby' who died in 1546. He was a man condemned by the Justices and executed by burning at the stake in Ipswich for his Protestant beliefs. He is numbered among the Ipswich Martyrs and died for denying the Roman Catholic doctrine of transubstantiation of the Host. This was the first recorded execution by burning in Ipswich for such a cause, but was followed by several others over the ensuing twelve years, so that by the death of Queen Mary in 1558 there are said to have been seventy-seven persons in Ipswich under condemnation, who were afterwards released. Ipswich had witnessed the arrest of the preacher Thomas Bilney in May 1527, who had appeared more than once before Ipswich's Cardinal Thomas Wolsey, been tried for heresy and burned in Norwich in 1531.

The account of the execution is chilling. A large crowd of many hundreds gathered on the Saturday to witness the event, which was held at the Cornhill, then called the Market Place, outside the Town Hall. Adjacent was the meat market building called the Shambles, a large timbered structure with an arcade around the ground floor, and with a balcony above from which public spectacles could be viewed. A large company, including most of the neighbouring justices, were assembled there, and the stake, broom and brushwood faggots had been set up in the centre of the Cornhill. Kerby was fastened to the stake with irons. From the balcony of the Shambles Dr Rugham, formerly a monk of Bury St Edmunds, delivered a sermon, taking his text from Chapter 6 of the Gospel of St John. For there it is written, that in the Synagogue in Capernaum Christ said:
"I am the living bread which came down from heaven. If any man eat of this bread, he shall live for ever: and the bread that I will give is my flesh, which I will give for the life of the world." (vs. 51)
"Except ye eat the flesh of the Son of man, and drink his blood, ye have no life in you. Whoso eateth my flesh, and drinketh my blood, hath eternal life, and I will raise him up at the last day. For my flesh is meat indeed, and my blood is drink indeed.' (vs. 53-55)
As Dr Rugham delivered his sermon, Kerby interrupted with statements to the people telling them here to 'believe him', or there 'it is not true'.
The priest then called upon Kerby to declare again his belief concerning the sacrament of the mass, and Kerby replied again as before. The under-Sheriff then asked him if he had anything more to say. "Yea, sir, if you will give me leave," replied Kerby. "Say on." Then Kerby, taking his cap from his head, put it under his arm as though it should have done him service again; but, remembering himself, he cast it from him, and lifting up his arms he said the hymn Te Deum with other prayers in the English tongue. At this Lord Wentworth, who stood in the gallery, was seen to turn aside behind one of the posts of the gallery, and weep, and many of the beholders wept also. The flames were kindled and with a loud cry to God, Kerby beat upon his breast 'so long as his remembrance would serve'. As he died a great shout of admiration for his constancy went up from the crowd of witnesses.

This Protestant Martyrs Memorial stands fairly close to the Reg Driver Centre (home to a blue plaque)  in Christchurch Park and was erected in 1903 to commemorate the nine Ipswich martyrs who were burnt at the stake for their Protestant beliefs, under the reign of Mary I. The memorial was funded by private subscription which was opened in November 1902, after attention had been drawn to the story of the martyrs in a series of newspaper articles in the East Anglian Daily Times between 1898 and 1900. The lettering is of interest in that the flat stone surface has been excavated around each character, leaving the letters and numerals standing in a darker rectangle (a sort of cameo method, as opposed to intaglio where the letters are incised into the surface). There is more than a touch of the art nouveau in the letterforms, very much of the Edwardian times.

The memorial is Listed Grade II:-
"By H.G. Edwards. Stone, marble and a brick core. C20 concrete stepped plinth surrounded by low wrought- and cast-iron railings. Stone base of monument is of square section and has extruded corners below moulded cornice. Inscriptions on sides of the base include on west: This Monument/ is erected to the memory/ of/ nine Ipswich Martyrs/ who for their constancy to/ the Protestant faith/ suffered/ death by burning. Quatrefoil-section marble shaft with an annulated ring rises to a heavy cornice and a polygonal finial in Gothick style, with gablets."