A few yards down from Henslow Terrace (1 Henley Road) is a house with the 'St Georges Street' nameplate and a central rectangular frame in the cement render which suggests that this might have once been a tavern. It is customary in street nameplates for the possessive apostophe to be dropped – perhaps it was difficult to include such punctuation in cast iron signs; this sign boasts not one but two superior 'T's, one for 'Saint' and one for 'Street'. (Note the modern street nameplate further up Henley Road for 'St Edmund's Road' – one of the few such apostrophes.) The nameplate has seen better days. The usual angled supports are missing and it looks as if four holes have been drilled across the width of the plate and screws driven into the wall. 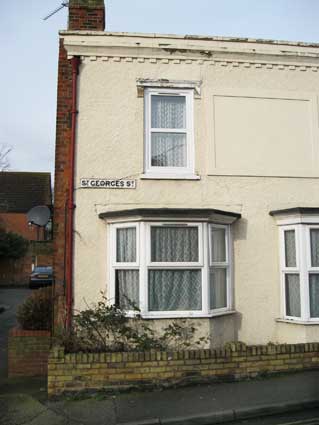 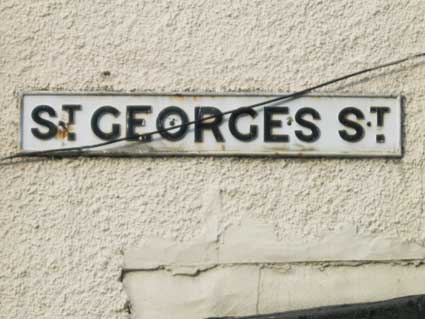 2014 images
At the other end of the street, a rather more municipal-looking street sign. Still no possessive apostrophe, one notices. 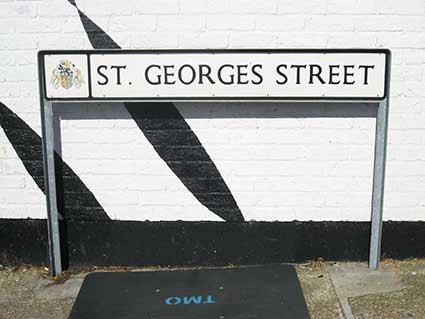 2018 image
Salem Chapel, 52 St Georges Street
This fine building with its arched windows stands half-way up the slope of St George's Street, not far from the former Globe public house. 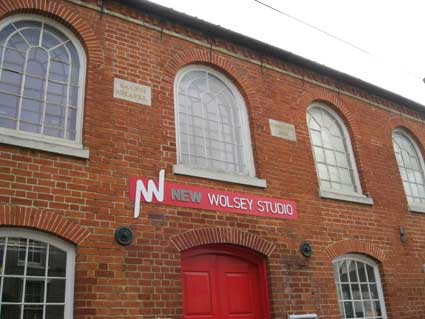 Originally constructed as a chapel this 19th century, two-storey, redbrick building later became a storage area for the Ipswich Museum and Art Gallery (which it backs on to) and is now the New Wolsey Studio, a performing arts venue and offshoot of the town’s New Wolsey Theatre. The original baptism pool survives below the present day flooring and stage. The chapel was opened in 11 June 1812. It was built at the sole expense of Mr Joseph Chamberlain for £1,200 and he conveyed it to trustees, for the use of Particular Baptists. At 45 by 35 feet, the Salem Chapel was intended to accomodate four hundred people. (To the left of the photograph below is the dated Ipswich Museum extension.) 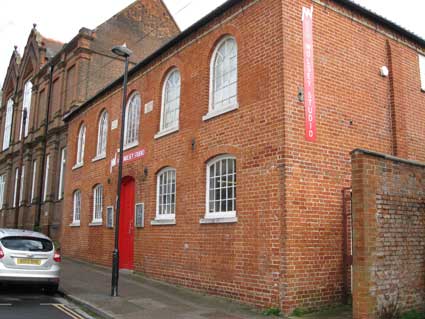 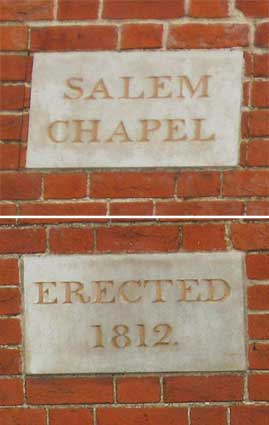 Salem derivation: a hellenized form of the word for 'peace' in Hebrew (שלום, shalom) which is mentioned many times in the Bible and associated with Jerusalem. It was chosen as the name of an early settlement in Massachusettes, USA (1626) and became infamous for the Salem Witch Trials (1692). 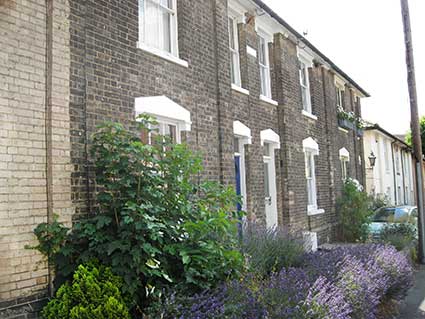 A four-house terrace to the south of the Salem Chapel. 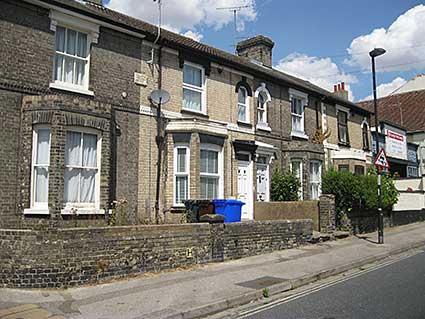 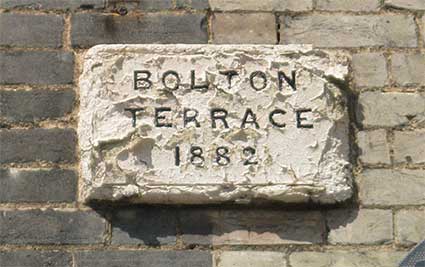 A damaged, but still readable, plaque between 17 St Georges Street and the side wall of no. 2 Bedford Street. The name probably relates to Bolton Farm which was to the north of Christchurch Park; part of the Bolton meadowland became the Upper Arboretum: St Georges Street, then Henley Road lead up to this area. See Our Christchurch page for the story of the Park and an 1867 map showing Bolton Farm. 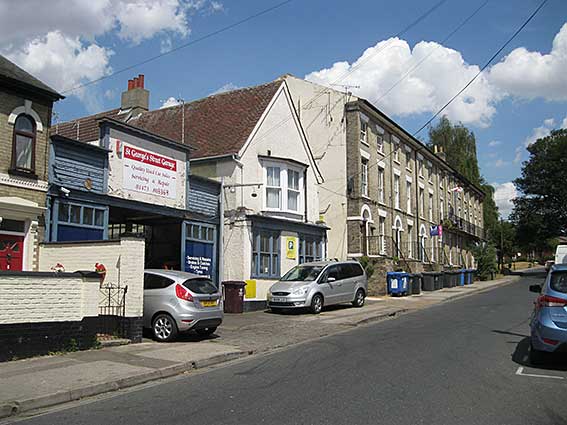 St Georges Street Garage lies north of Bolton Terrace with the attractive three-storey terrace (with sub-basements) further north which features stepped access to the front doors which increases with the fall in the road from the carriage entrance at the far end; also a first floor wrought iron balcony which extends half-way down the building. The terrace lies opposite the Ipswich Museum extension.

6-8 Bedford Street
Round the corner is (the remainder of) one of the housing developments by the Ipswich and Suffolk Freehold Land Society (F.L.S.). Oddly off-centre the six-house terrace on the north side – not counting the conjoined 'Bedford House' at the west end, which has its own name plaque – carries a plaque on nos. 6 to 8: 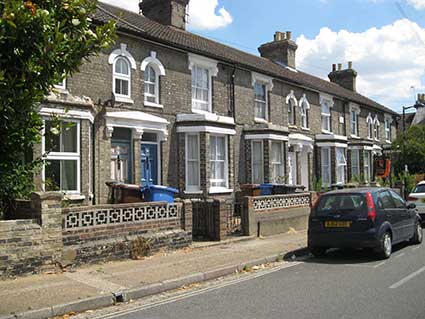 Chapel of St George
One footnote about this street concerns martyrdom. Protestant martyrdoms associated with Ipswich begin with Thomas Bilney. He denounced saint and relic veneration, together with pilgrimages to Walsingham and Canterbury, and refused to accept the mediation of the saints. The diocesan authorities raised no objection for, despite his reforming views in these directions, he was to the last perfectly orthodox on the power of the Pope, the sacrifice of the Mass, the doctrine of transubstantiation and the authority of the church. Cardinal Wolsey took a different view. In 1526 he appears to have summoned Bilney before him. On his taking an oath that he did not hold and would not disseminate the doctrines of Martin Luther, Bilney was dismissed.

But in the following year serious objection was taken to a series of sermons preached by him in and near London. Bilney was plucked from the pulpit of the Church (or Chapel) of St George in St Georges Street, Ipswich as he preached in favour of the Reformation in 1527, arrested and imprisoned in the Tower of London. He had previously preached in the nearby St Margaret Church. This was during a preaching-tour undertaken with the Norfolk mass-priest Master Lambert. Arraigned before Wolsey, William Warham, Archbishop of Canterbury, and several bishops in the chapter-house at Westminster Abbey, he was convicted of heresy, sentence being deferred while efforts were made to induce him to recant, which eventually he did.

After being forced to recant he was imprisoned in the Tower of London for a year, and then returned to Trinity Hall, Cambridge for two years in great torment of conscience. In 1531 he went to Norwich and declared his convictions, and was there burnt at the stake.
Nine martyrs are commemorated on the memorial in Christchurch Park. In Ipswich burnings-at-the-stake took place on the Cornhill and on Rushmere Common.

The Chapel of St George stood opposite the site of Salem Chapel. This site is now occupied by housing (the three storey terrace north of today's motor garage show in the '70A Christchurch Street' photograph above).
Map: 'A plan of the Christchurch Estate belonging to Tho. Fonnereau Esq. surveyed 1735 by John Kirby' is shown on our Bolton Lane page under 'The story of Christchurch Park'. The street is labelled 'George Lane' – today's St Georges Street with the legend 'The Ruins of St Georges Ch', so the ruins were still in existence in 1735.
See our Brook Street page for a 1902 map of the Dykes Street and chapel site area of St Georges Street.