This page represents some of the examples of old lettering found by striking eastwards from Liverpool Street Station, London. This area is adjacent to that covered in our Shoreditch page.

Spitalfields takes its name from the hospital and priory, St. Mary's Spittel that was founded in 1197. Lying in the heart of the East End, it is an area known for its spirit and strong sense of community. It was in a field next to the priory where the now famous market first started in the thirteenth century. Historically it has played host to a transient community, primarily for new immigrants. Spitalfields had been relatively rural, until the Great Fire of London. By 1666, traders had begun operating beyond the city gates - on the site where today's market stands. The landmark Truman's Brewery opened in 1669. In 1682 after the Great Fire of London destroyed much of the city King Charles II granted John Balch a Royal Charter that gave him the right to hold a market on Thursdays and Saturdays in or near Spital Square. From 1880 to 1970s Spitalfields was overwhelmingly Jewish; it was probably the largest Jewish area in Europe receiving refugees from all over Europe, the Balkans and Russia, with over forty synagogues. As the area grew in popularity, Spitalfields became a parish in its own right in 1729 when Hawkesmoor's Christ Church was consecrated. Spitalfields fell into decline after the 1820s and gained a reputation as cheap area in which to live, proving a magnet to numerous waves of immigrants. During the 1840s the potato famine led to an influx of men from Ireland, bringing in workers to build the nearby docks. By the middle of the 20th century the Jewish community had mostly moved on. Since the 1970s a thriving Bangladeshi community has flourished. Today, the area boasts evidence of a Huguenot church, a Methodist chapel, a Jewish synagogue, and Muslim mosque. Its cultural traditions are steeped in silk weaving, leather ware, clock making, cigar making, barrow boys and a thriving fruit and vegetable market. Poor housing conditions, sweat shops, East End music hall and the legacy of Jack the Ripper, plus the immense variety of colours from the ever-vibrant Bangla Town all contribute to the rich tapestry that is Spitalfields today. It's ironic that historically one of the poorest, most overcrowded, disease-ridden parts of London now provides upmarket housing for the wealthier in society, many in refurbished 'period' lofts and houses. 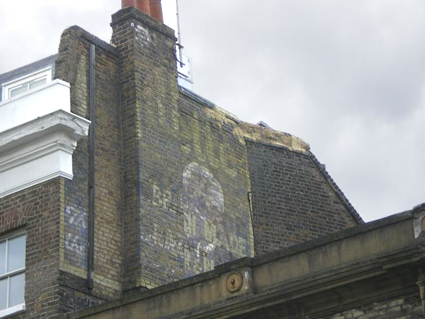 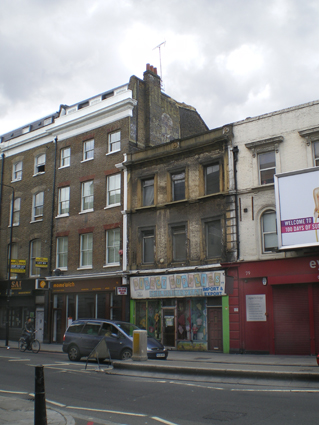 Gillette
BRITISH MADE RAZOR & BLADES
The...
the...

The above painted wall advertisement for Gillette products is on a wall high above No. 75 Commercial Street, E1; it shows the vestiges of an earlier version ('The... the...'). We can do no better than to quote Sebastien Ardouin's blog (see Links), where he goes into some detail on this and similar ads:

"I suspect the sign above on Commercial [Street] would originally have looked like the previous one but Gillette had it repainted at a later date using its more modern design. A couple of words (twice "The") and traces of letters from the earlier version can still be spotted in the lower left-hand corner. A few more letters belonging possibly to a third, intermediate, Gillette sign can also be seen here and there ("...ety" and "...or", making "Safety Razor")...
[The vestigial picture is probably the likeness of] King Camp Gillette, the head of the namesake company, whose portrait appeared on the packs of disposable razor blades." 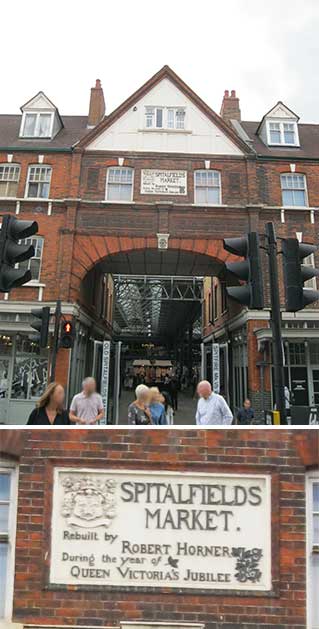 'SPITALFIELDS MARKET.
Rebuilt by
ROBERT HORNER
During the year of
QUEEN VICTORIA'S JUBILEE'

There has been a market on the site since 1638 when King Charles gave a licence for flesh, fowl and roots to be sold on Spittle Fields, which was then a rural area on the eastern outskirts of London. The existing buildings were built in the year of Queen Victoria's Golden Jubilee, 1887, to service a wholesale market, owned by the City of London Corporation. 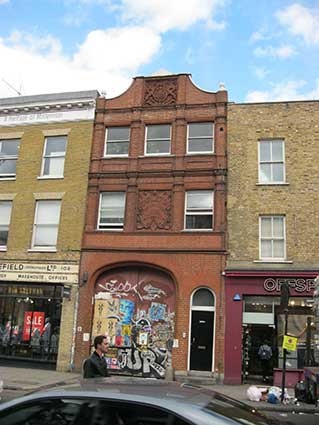 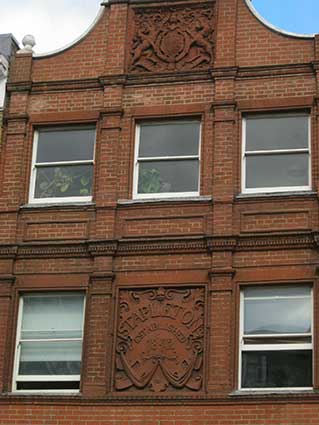 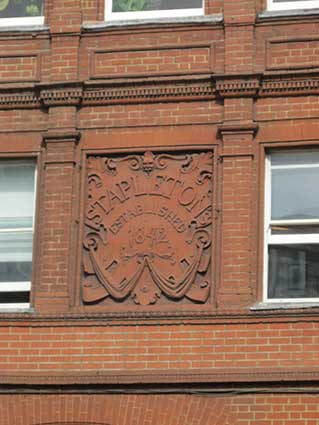 106 Commercial Street  features a royal coat of arms and 'Stapleton's, Established 1842', both in terra cotta panels. Stapleton's, in the mid 19th century, was a repository where horses were bought and sold. 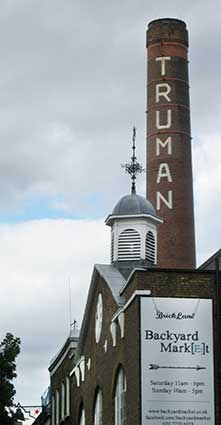 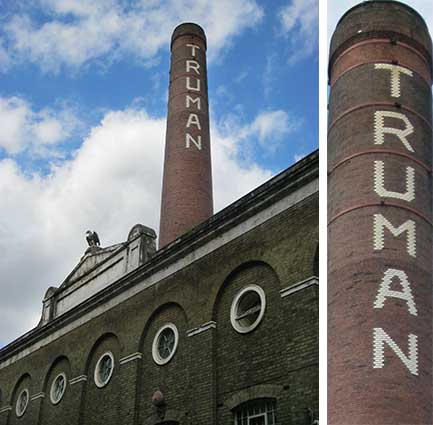 2017 images
The Black Eagle Brewery is the former brewing plant of Truman's Brewery located around Brick Lane, although the official (office) address is 91 Brick Lane. The eponymous eagle can be see atop the pediment fronting Brick Lane (above centre). Built by Thomas Bucknall around the time of the Great Fire of London (1666), it was acquired by Joseph Truman in 1679. By 1748 the Black Eagle Brewery was the third largest brewery in London, and probably the world, with 40,000 barrels produced annually. In the 21st century, the most striking feature of this campus of beer-brewing (now, of course, 'The Old Truman Brewery': a ten acre arts, media  and leisure/eating centre) is the factory chimney featuring bold white brick lettering with iron banding on the red bricks: a huge advertising sign. 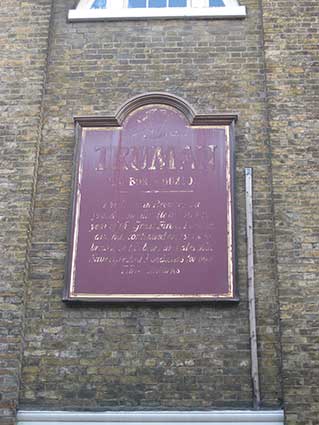 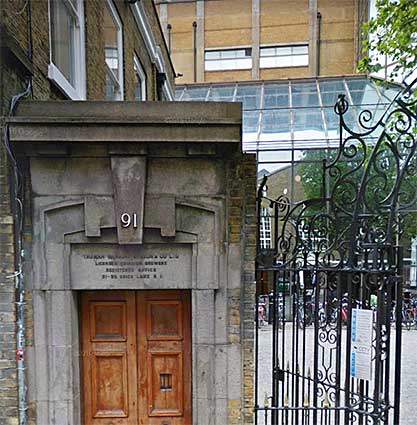 Just down the road and on the other side are the offices of the brewery. The stone entrance at no. 91 features the relief metal lettering:

The shaped board nearby has been thoughtfully obliterated with maroon paint, which is now degrading in the weather. With gold characters on a maroon background, the sign reads:

‘TRUMAN
HANBURY & BUXTON
—-
The Truman Brewery was
founded on this site in 1666, the
year of the Great Fire of London,
and has continued ever since to
brew here the beers and ales that
have refreshed Londoners for over
Three Centuries’

The nearby Dray Walk, Buxton Street and Hanbury Street also commemorate the old brewery and its importance in the area. 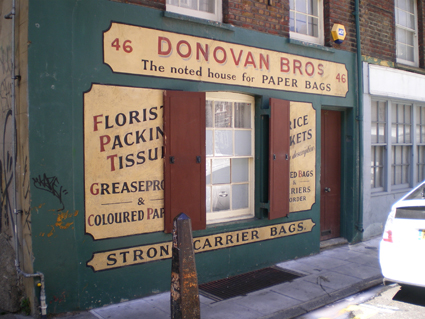 PRICE
TICKETS
of every description
PRINTED BAGS
-&-
CARRIERS
TO ORDER 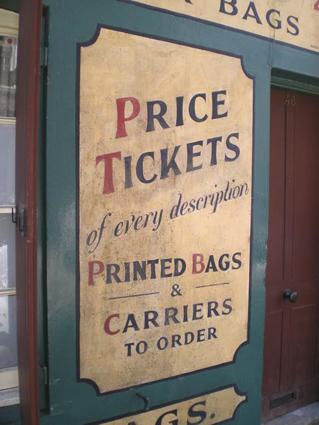 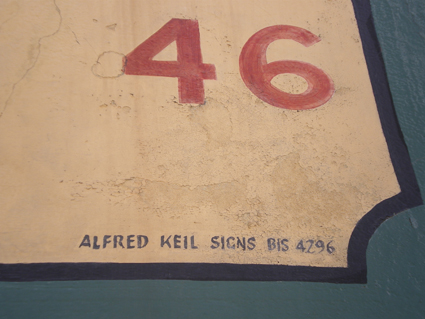 The above left image was achieved by surreptitiously pulling back one of the window shutters. The signwriter has justifiably credited himself in brush script on the top cartouche:

'BIS' is the old London exchange triplet of letters for Bishopsgate in the City of London. All-numeral dialling codes were introduced around 1968.
[UPDATE March 2012: "A. Keil was my father of Alfred Keil Signs (based at 5 Whites Row) though his name was Angel Keil - he did most of the sign writing in the East End and the City during the the 1930's to the 1950's. I think he did the Percy Dalton Sign too; he was quite friendly with him and I remember he did a sign with a peanut for him.  I wandered up there today and was really pleased to see them still there. Regards, Connie Chesterman". Many thanks to Connie for getting in touch; it must be a good feeling that so-called epehemeral advertising signs are still in place long after the companies have ceased. We think that the area would be a poorer place without them. See also her note on the next sign...]
We noted in 2013 that this shop had been occupied by former 'Young British Artist', Tracey Emin; the signs remained intact.

[UPDATE 25.2.2017: 'I stumbled across your site today whilst looking for background for some of my own photos of Spitalfields. I was particularly struck by the notes regarding the Donovan Brothers signage at 46 Crispin street and the additional comments from Connie Chesterman regarding her father - the original sign-writer. Lovely stuff.
The explanation regarding the BIS telephone number rather implied that the sign-writer must have done his work before 1968 after which the telephone numbers became all numeric. However my own photo of this shopfront, taken in 1985, shows the shop with it's previous red and yellow design, so the green and yellow design painted by Connie's father must be post 1985.
My own earliest photo showing the green frontage was taken in 1999 and shows it signage looking rather 'tired' and ready for a repaint. However the PERCY DALTON metal sign a couple of doors along, at that point looks fairly good with just a few places where the paint is beginning to peel.
By chance some of my early photos of Spitalfields were republished today by the gentle author of Spitalfields Life, see: http://spitalfieldslife.com/2017/02/24/philip-marriage-photographer/
and an earlier selection (one of which shows the Donovan Brs shopfront in 1985) can be found at http://spitalfieldslife.com/2012/06/15/philip-marriages-spitalfields/
Feel free to make use of this photo on your site if you think it will help. Meanwhile, may I say - as an old typographer - how much I enjoyed looking through your pages.
My best wishes, Phillip Marriage' We are delighted to include the 1985 view of the Donovan Bros frontage and admiring of Phillip's documenting of these streets over fifty years or more.] 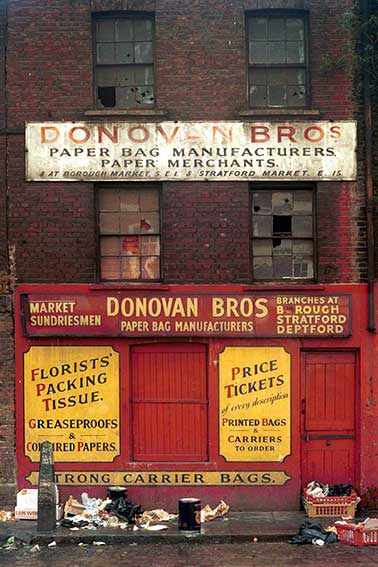 High above the present 'English Restaurant / Oyster Bar' on the corner of Crispin Street and Brushfield Street, E1 we find a battered advertisement. 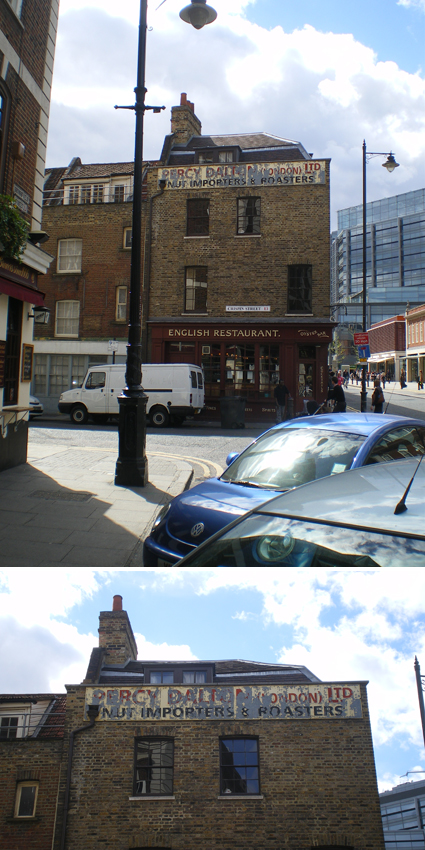 Simple red and black caps agaist a cream background, now all hostage to the vagaries of the rain, wind and frosts. But what a great sign...
[UPDATE 26.10.14: "Hi you might remember I wrote to you about the Donovans facia that my father painted.  I have now spoken to my brother who lives in Canada and he assures me that he and my father also painted the Percy Dalton sign and that it is not painted on brickwork but on a metal sheet that is fixed up with hooks he remembers helping put it up. Kind regards, Connie Chesterman" 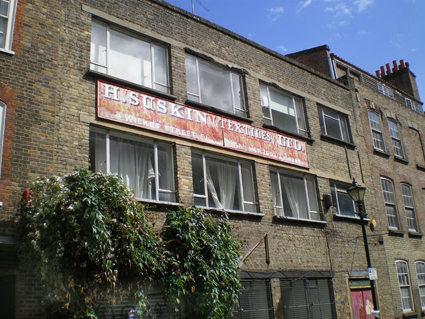 The middle line of lettering is fugitive (orange-gold against the red background). Someone has tried to overpaint the lower part with white paint. 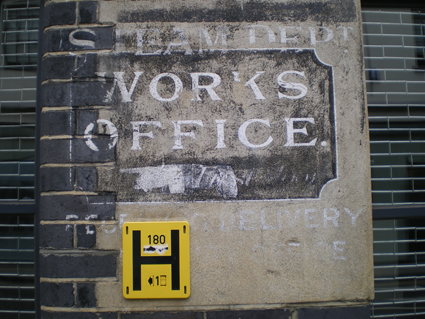 A double image of white lettering across this black-painted cartouche. In the centre of the panel is:

and a pointing, cuffed hand (which we discover is called a manicule) indicates the left entrance. This pointer overlays italic lettering ('Est.' standing for 'Established and an indecipherable date?). Above this and running over the white surround of the cartouche (so cannot originally have been part of it?) are the somewhat mystifying words:

Beneath and partially obscured by the yellow hydrant sign are the faint words which we think are:

[UPDATE 16.1.2021: This sign is on part of an extraordinary and long, decorative building taking up much of the north side of the street originally called The Moorish Market (information from: Caroline's Miscellany, to whom our thanks). The Moorish Market was a Victorian shopping centre, opened in 1905. It only ran as such for about four years and this part was obviously later used as a factory. Incidentally, on the street name: "The 1891 Census shows that most inhabitants of the north side of the street worked in tailoring and associated trades. That offers a tempting explanation for the street name, but in fact 'Fashion' is a corruption of the original 'Fossan Street'."] 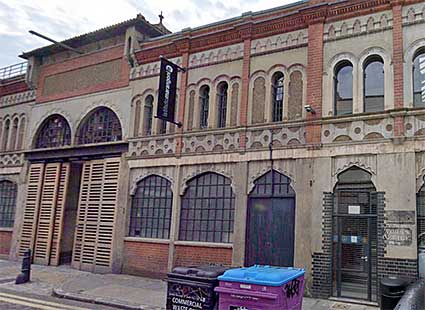 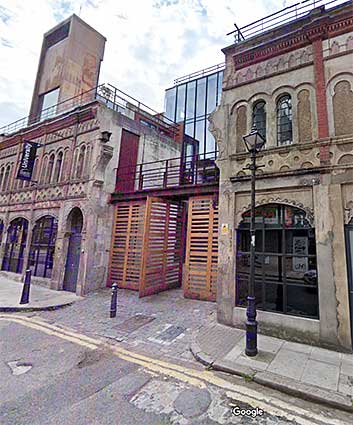 The street scene above left shows the sign at lower right. Further down the street is another destroyed entrance to the market (above right) where the decorative arches have gone, leaving stubs on each side. The stone setts making up the entry are clearly visible and, underneath a layer of decaying tarmac, on the street, too. This building is partly occupied by The London/British School of Fashion, which would be appropriate to the name of the street if that hadn't derived from something which wasn't at all fashionable (see above).

'Commit no Nuisance'
Incidentally, the Spitalfields Life blog (January 2021) shows a fading admonition painted discreetly in Fournier Street on the side of  Hawksmoor's Christ Church, Spitalfields. The 'gentle author' says: "In fact, I am reliably informed that this sign is actually employing the language of euphemism to instruct customers of the Ten Bells not [to] urinate against the church wall. Almost faded into illegibility today, with pitiful nobility, 'Commit no Nuisance', speaks in a polite trembling whisper that is universally ignored by those passing in Commercial St."
We have found similar signs in Tewkesbury and St Albans.

For further examples see our London Galleries page including some from nearby Shoreditch.