St Albans' Clock Tower is the only surviving medieval town belfry in England and is designated as a Scheduled Ancient Monument. The people of St Albans built the tower, which was completed by 1405 as a symbol of their resistance against the power of the abbot of St Albans. The Tower allowed the town to sound its own hours and, until 1863, the curfew. The Clock Tower's bell rang out for the first Battle of St Albans during the Wars of the Roses in 1455. Today, the tower – and its 600 year old bell – still stands face to face with the abbey's tower. It is open to the public to climb to the top at certain times.

The side door, hemmed around with modern paviors and street furniture, bears a hand-painted sign:

Perhaps there was a tendency for male patrons of the nearby Fleur de Lys or The Boot public houses to relieve themselves in this corner. 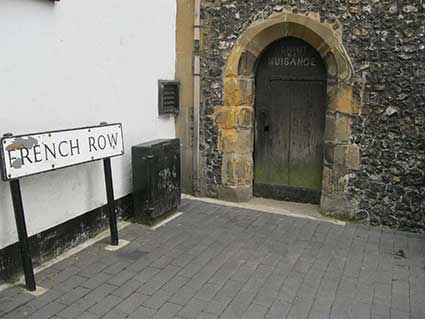 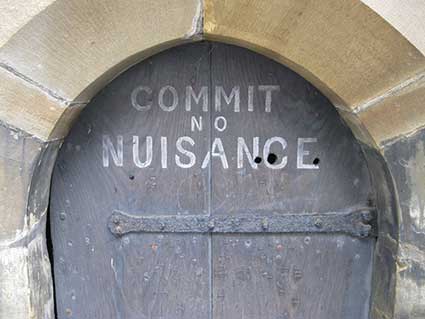 There is a 'Commit no nuisance' sign of some age in Tewkesbury. And, although not illustrated on this site yet, we learn of another on the wall of Christ Church Spitalfields in east London – there is more information on that page. 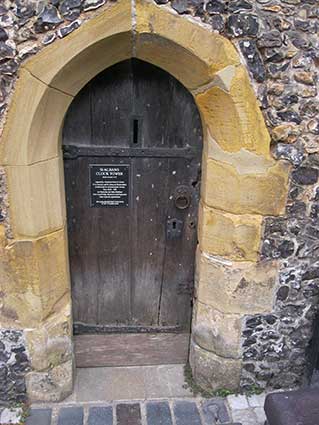 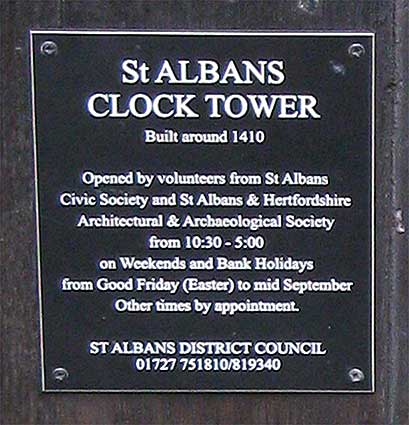 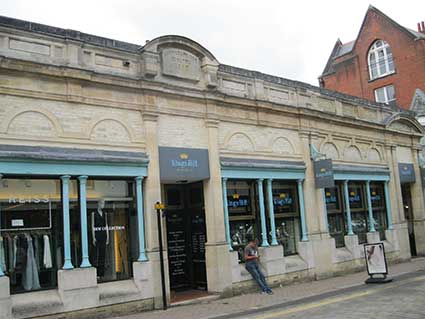 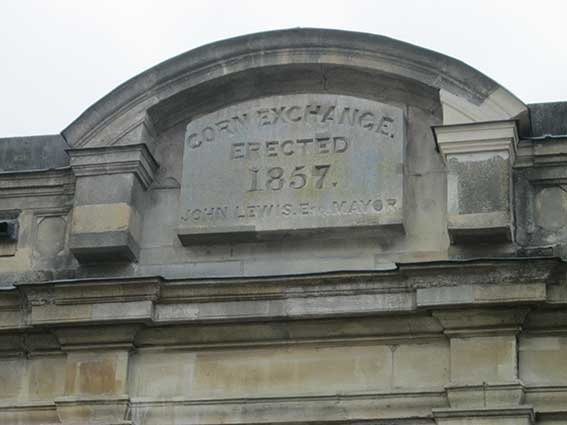 The St Albans History website has more on the design of the St Albans Corn Exchange (now, inevitably, used for retail) and materials used.

The projecting characters have a stylish design with the enalrged 'P' and 'S' obeying the x-height of the smaller caps. The drop of the 'P' creates a comfortable space for the smaller 'AND'.
Gable end in brick and stucco with lettering in terra cotta; Pike & Sons were butchers, grocers and provision merchants. 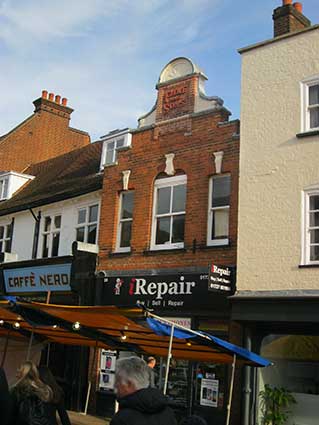 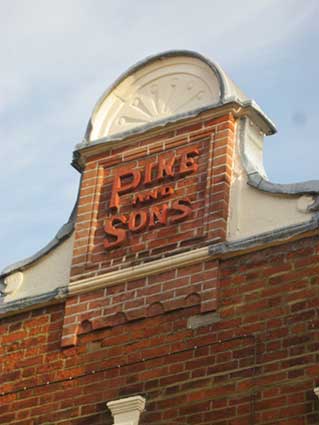 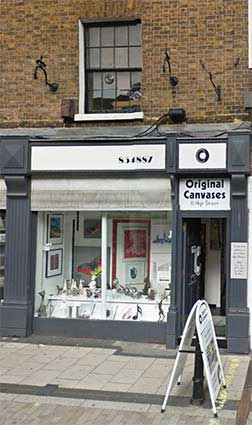 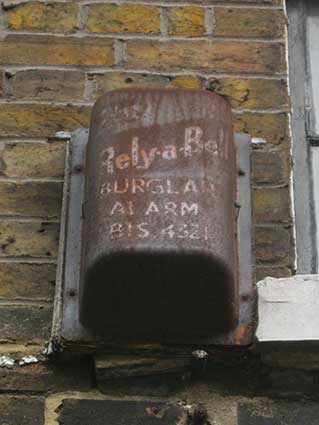 Just to the left of the 1st storey window sill is an old burglar alarm box. The amount of metal brackets and cabling at this level tells some of the story of this building.

The word 'THE' is unreadable in the top left corner. But the brand name is a delight and deserves to be marketed again. The Rely-a-Bell Burglar & Fire Alarm Co. Ltd. was based at 54 Wilson Street, Lodon E.C.2 from 1935. The company dates back to 1904 as part of the ironmongery business of Thomas Gunn, which developed into an electrical firm.
'BIS.' is one of the old London exchange prefixes for telephone numbers, standing for Bishopsgate, which is on the north-east of the City of London. The Post Office trunk telephone system was opened to the public on 16 July, 1895. The first Post Office exchange in London was opened on 1 March, 1902: 'Central Exchange' with a capacity for 14,000 subscribers. 'City' Exchange was the second (capacity 18,000) followed by 'Mayfair' to serve the West End, 'Western' for Kensington and 'Victoria' for Westminster in the same year. Several other Post Office exchanges were also opened in the London suburbs. New dialling codes, preliminary to the start of subscriber trunk dialling in London, were introduced in the London Directory Area on 6 April, 1959. The three-letter exchange prefixes were phased out from 1966 and replaced with all-digit phone numbers.


Former School of Art/Library
St Albans on the River Ver in Hertfordshire has two official names for its inhabitants: Verulamian and Old Albanian. St Albans was a settlement of pre-Roman origin named Verlamion (or Verulam) by the Ancient British Catuvellauni tribe. It became the first major town on the old Roman road of Watling Street for travellers heading north and became the Roman city of Verulamium. After the Roman withdrawal, and prior to becoming known as St Albans, the town was called Verlamchester or Wæclingacaester by the Mercian Angles. The mediaeval town grew up on the hill to the east of this around the Benedictine foundation of St Albans Abbey. This is the spot where tradition has it that St Alban, the first British Christian martyr, was beheaded sometime before AD 324. The city is therefore steeped in history.

The lettering examples here are to be found in the Romeland / George Street area, just north of the Cathedral & Abbey Church of St Alban. The first building has an 'institute' feel about the architecture and will be familar to those who regularly wait at the bus stop on the opposite side of the road. They may not have noticed the lettering on the lower part of the terra cotta roundels beneath each relief portrait: 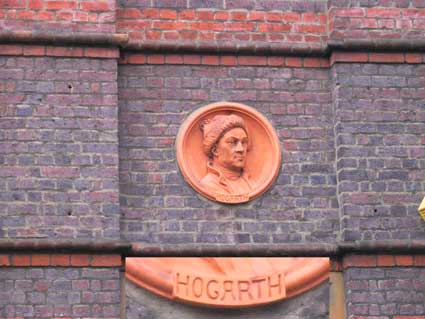 [UPDATE 6.8.2014: "I came across your site whilst searching for the meaning of the N&C lettering on the building in Sutton Road, St Albans [see below] and so I was pleased that you resolved that for me. I was following the route of the old Hatfield to St Albans railway line at the time, now called the Alban Way.

The former Benskin's pub in Spicer Street was called the Vine. Hence the grapes sign over the door. More info here:
http://www.stalbanshistory.org/page_id__538_path__0p2p145p147p.aspx
Regards, Paul Hardy" Many thanks to Paul for the information and the link.] 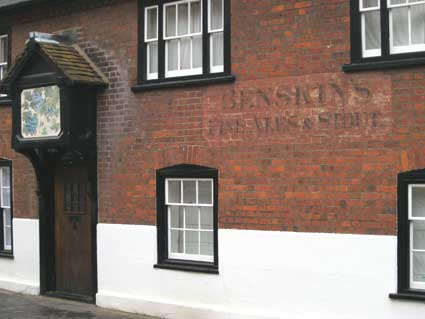 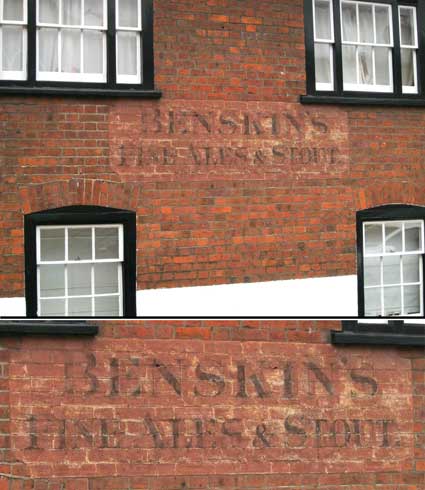 The brickwork sign often lives on for decades (or even centuries) after the building has fallen into disuse or changed function. This fine example of a small tavern show a pale cartouche with the centred large and small capitals:

It looks at first glance as if this ghostly sign used drop shadow characters, but we think that there is an earlier sign underneath which follows that same lettering but uses a fatter font. If anyone knows the original name of this house, do get in touch.  Benskin's Watford Brewery Ltd was founded by 1722 by John Pope at New Street. Moved by his great-grandson, John Dyson to 194 High Street in about 1820. Bought by Joseph Benskin in 1867 with 42 public houses for £34,000. Registered in July 1894. Acquired by Ind Coope Ltd in 1957, and brewing ceased in 1972 with 636 tied houses. The brewery buildings were demolished in 1978, but the offices were converted into the Watford Museum.

From the link provided by Paul Hardy: dating from the 17th century, from 1811 the Vine was let at a peppercorn rent to Samuel Wildbore, a brewer trading from premises in the yard of the Blue Boar in the Market Place. He turned it back into an alehouse. The Vine was later leased to Messrs Locke & Smith, brewers based in Berkhamsted, and then, from 1913, as part of the Benskin's empire. It shut in 1932.

We don't think that the Brewery History Society (see Links) lists this example in its lists of defunct brewery signs. 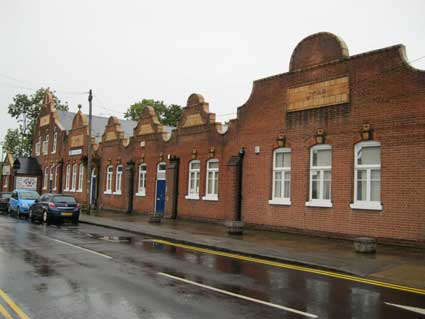 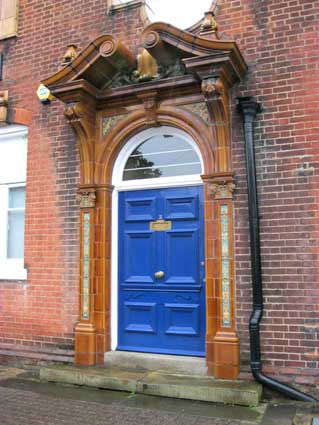 2012 images
Nicholson & Co. Ltd rainwear factory, Beaumont Works, Sutton Road, at St Albans' "East End".
The Beaumont Works was built in the early part of the twentieth century as a clothing factory. Apparently, there is a preservation order on the front door and its ornately tiled surround, which is indeed very grand (above right). The Grade II listed attractive Dutch gable façade; its buff tablets bear the initials:

for Nicholson & Company in a deliciously serpentine letterform. We love the way in which the Gordian knot of the ampersand rises up and kerns over the belly of the 'C', while keeping a grip on the upper loop of the 'N'. In 1900 Nicholson and Co. (Coat Specialists) Ltd. moved from Manchester and was established at the Beaumont Works in Sutton Road. The firm was based there until the 1970s. The  building is currently in use as a multi-occupancy business centre (see update below). 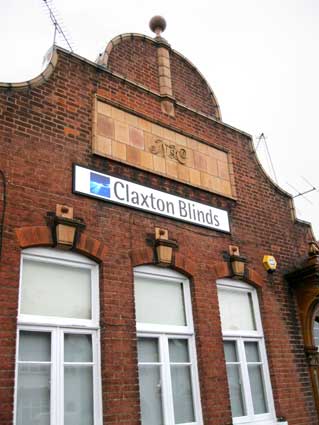 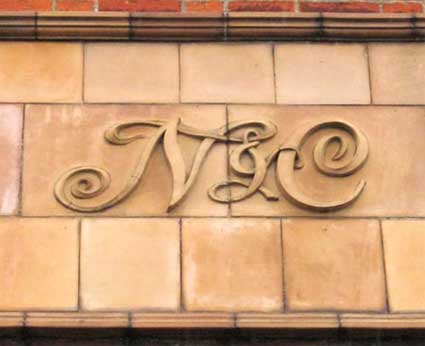 Not far from this building is the trackbed of Great Northern Railway branch line, the St Albans to Hatfield branch line, now a cycle and pedestrain route. The line opened in 1865; the last passenger train on this line was in 1951 and the last goods train in 1964.