The Victorian Church of St Michael has its front door directly onto Upper Orwell Street (featured on several pages on this website; see Street index). The rear of the Church Hall is close to Bond Street as seen on a 2004 photograph on our St Michaels Works page. The foundation stone, set low down on the exterior east wall reads: 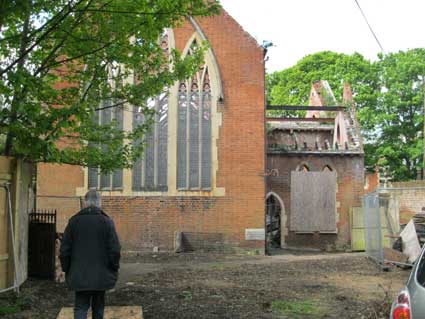 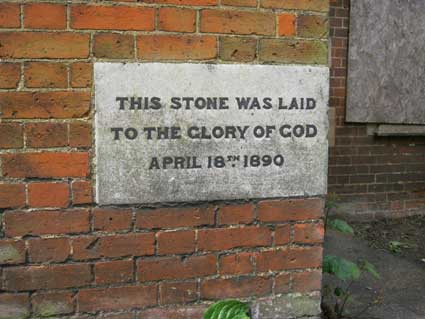 This date suggests a long gestation period for this church as the date '1900' appears on the interior tablet shown below. Simon's Suffolk churches (see Links) tells us: "The church was built over the course of the 1880s by the Ipswich architect E. F. Bisshopp, familiar for his restoration of the tower a few hundred yards away at St Nicholas. St Michael is a large red brick construction with high transepts and two bells in a gable at the west end. The last time I was inside, just before it closed in about 1997, I was struck by the elegant Arts and Crafts decorations, the vastness of the east window, and the way the tall, open nave gathered pastel shades and pools of light. To the east are considerable parish rooms, with attractive Regency-style windows." 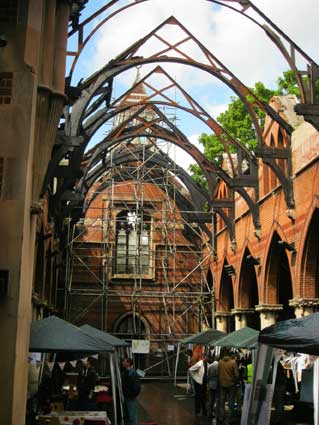 2014 images
The Church of St Michael burnt down in March 2011 (reported in the press to be the result of an arson attack). These photographs were taken on an Open Day, Saturday May 10, 2014 organised by the organisation which hopes to convert the church into a community centre. Stalls, music, food, plans for the future were in evidence. But these photographs suggest the huge task in making the site safe, re-roofing the remaining shell, restoring services, and fitting out the interior. 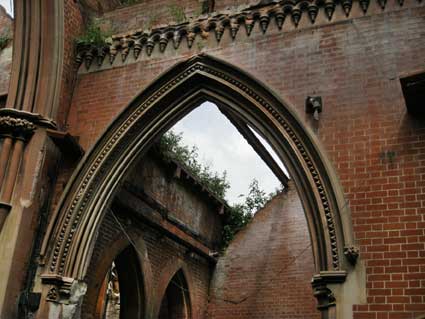 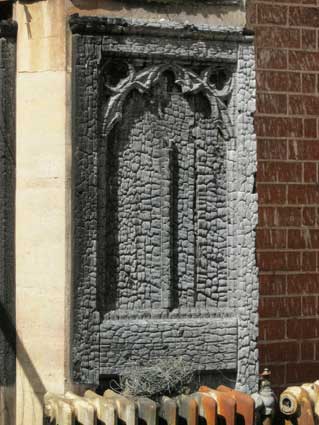 Invading weeds fringe the architectural features which escaped destruction. The fierce heat has left a deeply creviced ghost of a gothic wooden panel. 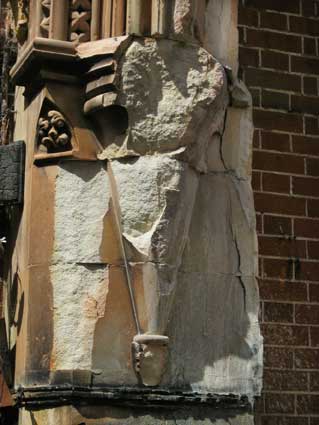 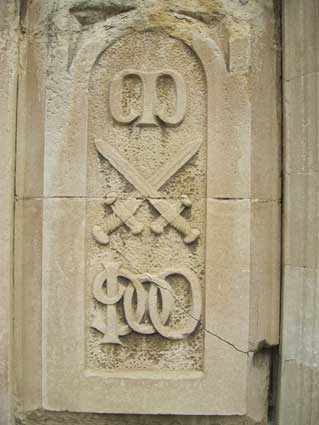 The carving above shows the capital 'M' for Michael, crossed swords and the interlinked date numerals: '1900'. This can be contrasted with the date on the foundation stone shown above. Identical carving can be seen on the interlinked date on St Matthew Church Hall in Clarkson Street, which suggests that both buildings were designed by E.F. Bisshopp. 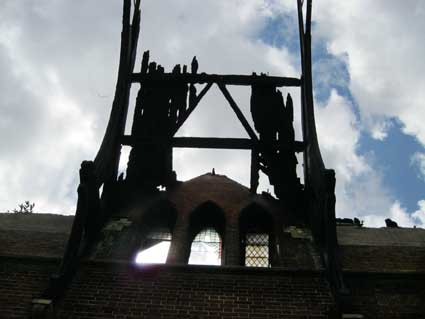 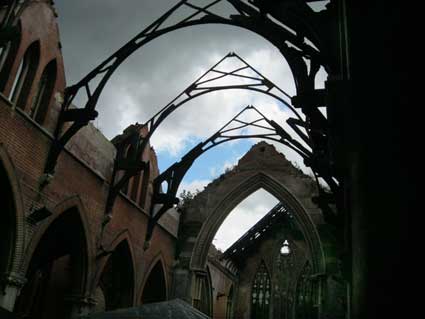 Above: the iron roof members and burnt timber fragments present a sorry sight against a dramatic sky. St Michael is know for the two bells in a striking, red-and-white gable at the west end; post-inflagration, this brick and masonry feature towers above the remains of the church, surrounded by scaffolding as the roof supporting it has gone. 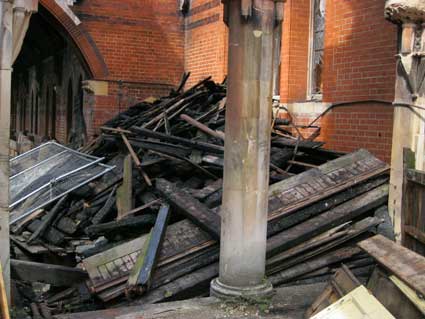 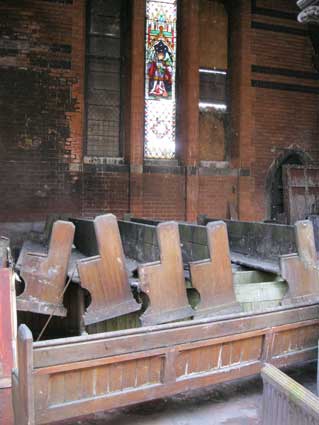 Burnt roof timbers and panelling piled up behind a scorched stone pillar. Wooden pews which escaped destruction are stacked together in a side aisle. 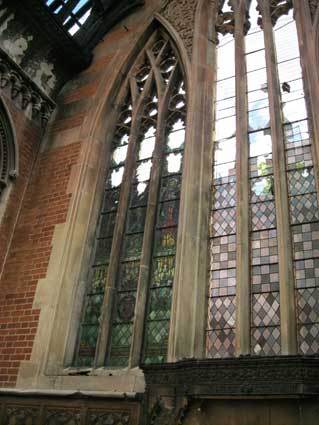 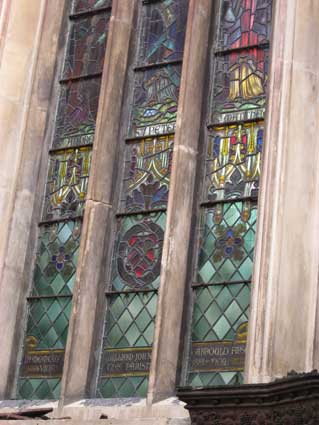 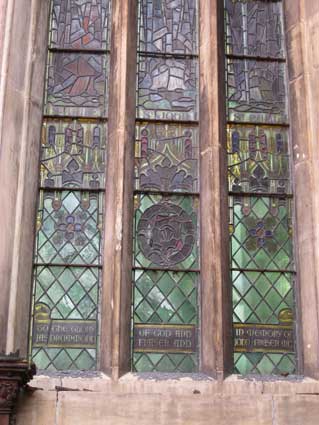 Some of the stained glass windows were damaged in the fire, some remain intact. Lettering in the central bars and dedications in the lower scrolls read: 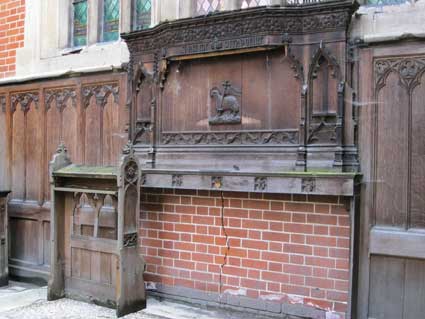 The scorched, timber altarpiece shows the lamb holding a crucifix with the legend in gothic characters:

'I am the bread of life'

Indeed the heat of the fire appears to have split the brickwork below. 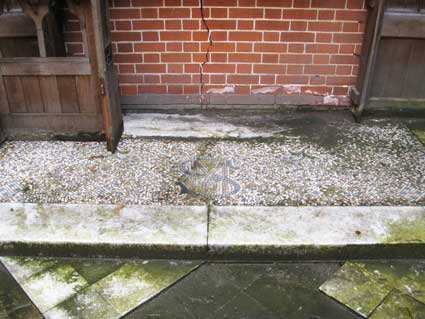 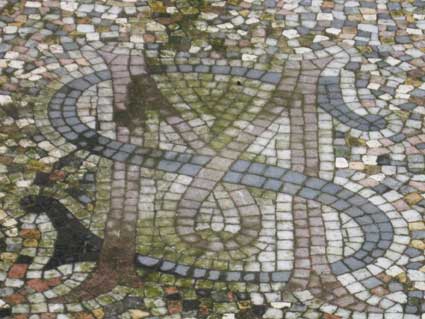 The mosaic floor in front of the altar, despite algal staining, show coloured tesserae in an interlinked 'S' and 'M' for St Michael. 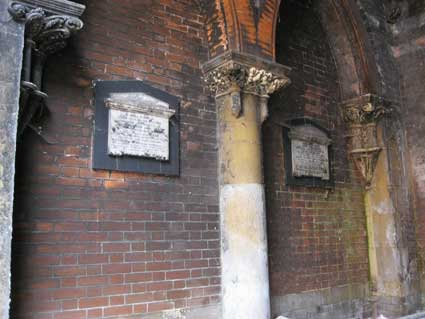 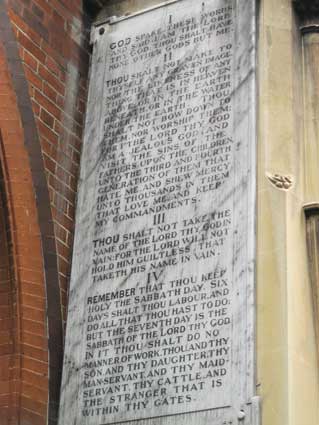 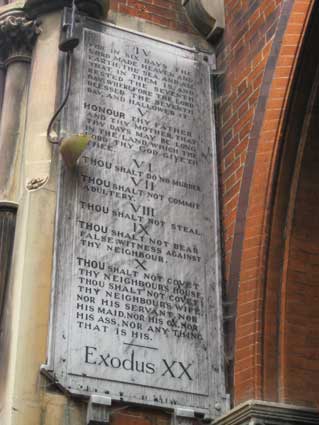 Above: the Ten Commandments spelt out at some length on two white tablets.
The plan of Phase 1 of the proposed reconstruction shows the church in blue and adjoining church hall in purple. In 2014 this hall is being re-roofed. 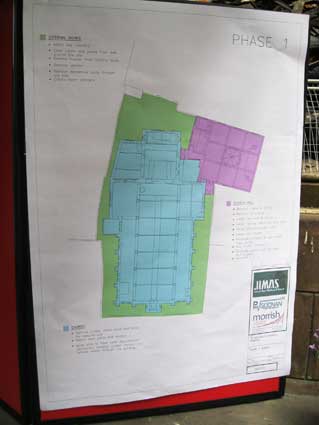 See our Ancient House page for a photograph of the interior of the church hall.

Below: the exterior photographs from Upper Orwell Street (next to the Crane sculpture) show the side aisle roof intact with an accidental version of a 'green roof'.

Also noticeable in the close-up is the effect of the fire on the leaded lights in the clerestory. The window at the top has softened and fallen down onto the stonework and another section, still holding some of its glazing lies amongst the plants on the pitched roof. 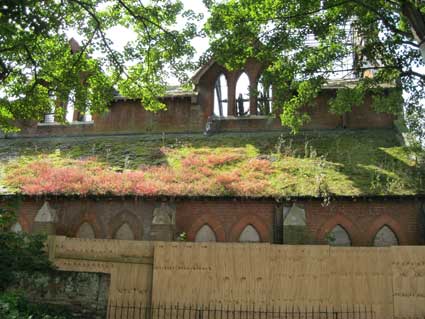 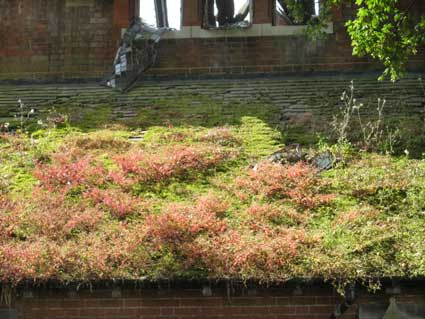 See our Chantry Park page for an old metal tobacco advertisement spotted in a corner of St Michael.

It was only in 2019 that we found out the whereabouts of St Michael's Vicarage – about a mile away in Woodbridge Road.

The Wenhaston Doom
As a footnote to this web page, the architect E.F. Bisshopp was instrumental in the discovery of one of Suffolk's earliest works of church art at St Peter, Wenhaston.
"... the most remarkable feature [is] its large, early sixteenth century paneled Doom painting. This rarest of surviving church fixtures, dating from no later than 1520, was constructed in the shape of a Gothis arch and measures an amazing 8 ft. 6 in. high x 17 ft. 3 in. wide at the braodest part. The Doom painting was discovered by accident during E.F. Bisshopp's restoration of the church in 1892 when the decayed whitewashed wooden tympanum that in-filled the chancel arch was dismantled  and carelessly deposited in the open churchyard for later disposal. During the night a heavy shower of rain washed off several layers of the whitewash, exposing parts of the original painting. Fortunately, the vicar had the presence of mind to immediately move the dismantled tympanum inside and the painting, ironically saved by the carelessness of Bisshopp's workers, was duly restored and hangs in the church to this day."
Robert A. Faleer: Church Woodwork in the British Isles, 1100-1535: An Annotated Bibliography 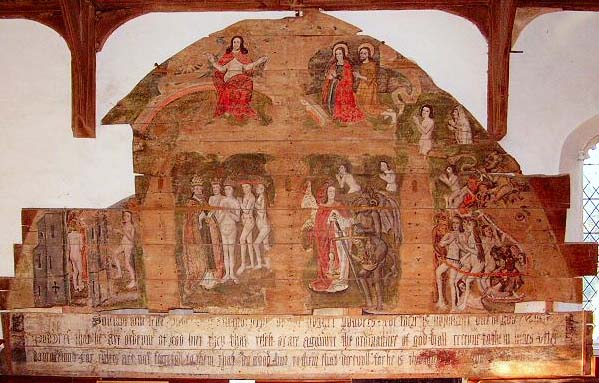 You can find out more about the subject matter in the Doom and look at close-up details on the Wenhaston.net website (see Links)