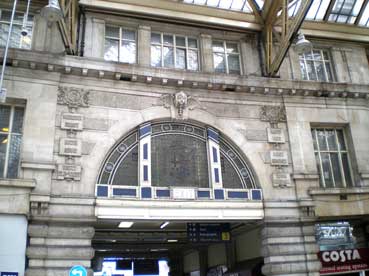 Waterloo, one of the great Southern Region London terminus stations (Victoria, Charing Cross, London Bridge - a hybrid 'through' and terminus station, it is the oldest station in London, first opened in 1836). Waterloo is the UK's largest station, covering an area of 24.5 acres. Inside the station, facing the platform barriers, the large semicircular arch shown above carries stonework banners on each side proclaiming the destinations served by trains from Waterloo, each topped by a wreath enclosing the monogram for the London & South Western Railway:

'HANTS, WILTS
DORSET, SOMERSET
DEVON, CORNWALL' to the right. A winged cherubic head at the zenith of the arch seems to be flanked by a pair of railway wheels. 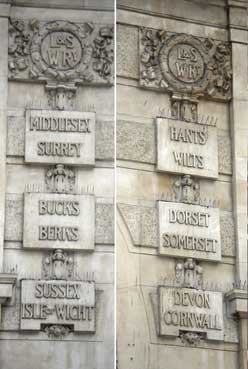 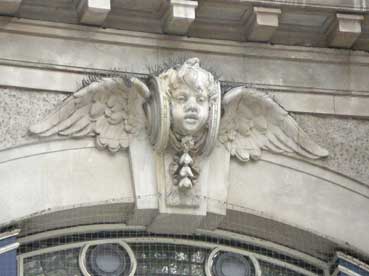 Outside the station, another semicircular arch: one of Waterloo's most notable features is the Victory Arch, built of Portland Stone. This commemorates the London and South Western and the Southern Railway men who gave their lives in the First and Second World Wars. 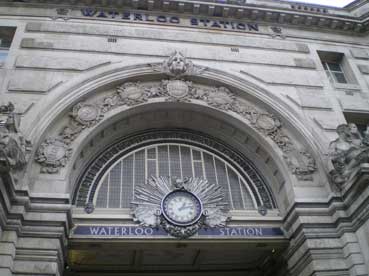 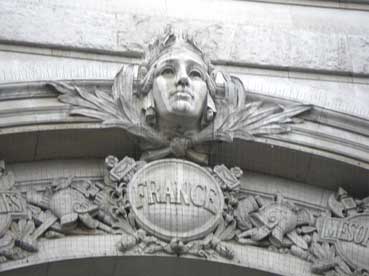 The lettering 'WATERLOO STATION' appears (attached to the stone facing) above the arch flanked by crowns and in white on blue ceramic either side of the central clock below. Running around the glazed section above the clock in condensed capitals of pierced silver metal: 'DEDICATED TO THE EMPLOYEES OF THE COMPANY WHO FELL IN THE WAR'.
On medallions grouped around the decorative frieze of the arch are the names of theatres of the Great War:
'BELGIUM... ITALY... DARDANELLES... FRANCE (below the central olive leaf-wreathed head)... MESOPOTAMIA... EGYPT... NORTH SEA'.
One remarkable feature is the clock at the radial centre of the archway. Surrounded by a sunburst of shards, with clouds below them, a swag of fruit below them, the clock face is topped by a military helmet and banner. 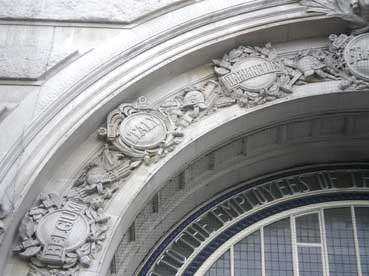 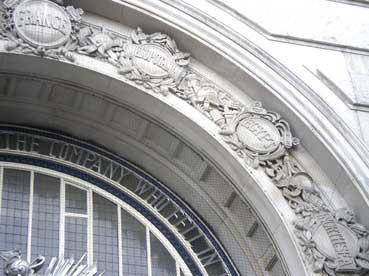 The concourse underwent some remodelling work between 1978 and 1983. Platforms 20 and 21 were lost to the Waterloo International railway station site, which from 1994 until 13 November 2007 was the London terminus of Eurostar international trains. Construction necessitated the removal of decorative masonry forming two arches from that side of the station, bearing the legend "Southern Railway". This was re-erected at the private Fawley Hill Museum of Sir William McAlpine, whose company built Waterloo International. Waterloo International closed when the Eurostar service transferred to the astonishing, newly rebuilt St Pancras railway station: a Victorian cathedral of railways, indeed. The rather sad sight of the disused 'International' section of the station which seems to be bolted on to the main body of the building lies behind the cluttered and largely ignored sculpture of that great painter of the railways: Terence Cuneo: star of so many jigsaws, railway posters and carriage pictures of yore. Perhaps this section ought to be re-christened 'The New Necropolis Station' (see below).

The roof and platforms of the 1900 – 1922 station were designed by J. W. Jacomb-Hood and A. W. Szlumper, engineers for the LSWR. The roof is of transverse ridge and furrow construction and is 520ft by 540ft. The maximum single span is about 118ft. The office buildings were designed by J. R. Scott, the chief assistant architect for LSWR. It is in Imperial Baroque style and is notable for its Victory Arch. This was designed to commemorate the loss of LSWR servicemen during the First World War. It is constructed from Portland stone and carries statues depicting War and Peace, which are placed below a statue of Britannia. 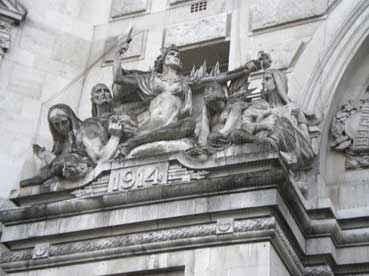 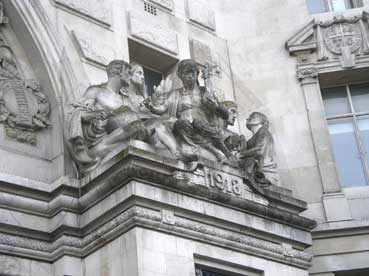 Waterloo Necropolis Station
*Brookwood Cemetery was opened in November 1854, and was the largest in the world. It was originally called the London Necropolis [literally 'city of the dead'] or Woking Cemetery. An unusual feature of Brookwood Cemetery was that it had its own private railway running through the grounds. The main reason for this was that the Cemetery was over 25 miles from central London, and the only convenient method of transporting coffins and mourners was by the London & South Western Railway. The funeral trains began to operate from 13 November 1854 when the Cemetery opened to the public.
A private Necropolis terminus was provided just outside Waterloo station. The original station (1854-1902) was located between York Street (now Leake Street) and the Westminster Bridge Road. This station was replaced by a more extensive building in 1902. This was due to the complete reconstruction of Waterloo Station. The original terminus was demolished at about this time. The new station was located at 121 Westminster Bridge Road and continued to provide railway funeral traffic until the station was bombed on the night of 16-17th April 1941. This entrance fascia at number 121 still exists and we clearly remember finding our way out of the main station via this access in the 1980s past the boarded-up remnants of the original booking windows with the lettering 'BOOKING OFFICE' above.
Below left: the now disused Necropolis station entrance. 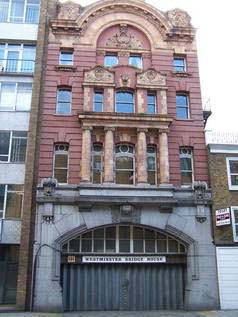 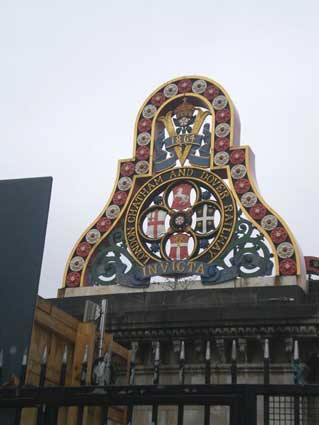 Above right: not far from Waterloo, as one walks down the river frontage and on the site of a demolished rail crossing over the Thames, next to the rather brutalist architecture of Doggett's Coat & Badge pub (now, inexplicably, a bar called 'Doggett's', thus at a stroke removing the link to the prize and name for the oldest rowing race in the world: up to six apprentice Watermen of the River Thames compete for this prestigious honour, which has been held every year since 1715), this fine piece of Victoriana in pierced cast iron:

'Invicta' is Latin for unvanquished. The date wrapped around the huge 'V' and Latin motto float on scroll flourishes; the railway company name in a circle around four armorial emblems. Thank goodness that London's refurbishment of its riverside celebrates such a fine pair of decorative bridge stantions. The bridge is 933 feet long, and had five spans of wrought-iron lattice girders, supported by massive cast-iron columns. The line was closed in 1964 and the superstructure removed in 1985, leaving just the headless columns in the river and its decorative insignia. Engineer: Joseph Cubitt. Contractor: Kennards of Monmouthshire. The columns can still be seen next to the present day Blackfriars Rail Bridge.

See also the Oxo Tower on this walk. Which isn't too far down the Southwark embankment from 'GABRIEL'S WHARF' which is hugely signed on a wall which also bears a trompe l'oeil run of painted windows. It can be seen on the riverside walk from The Cut, which is slightly south of Waterloo Sation, to Tate Modern (the former Bankside power station). 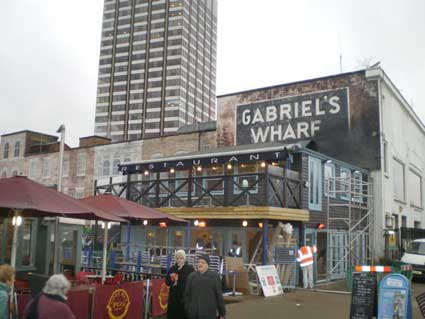 Here are three images from sites around Waterloo. 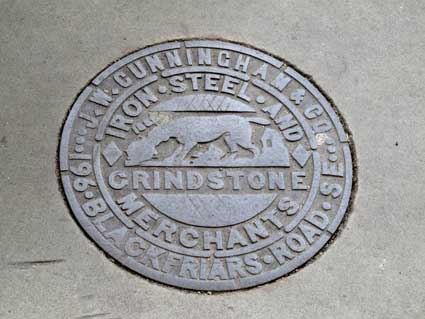 Stamford Street coal hole cover. This is apparently last remaining 'dog and pot' coal hole cover left which has not been stolen: it is set in concrete. 'Dog and Pot' is an old pub name which Dickens noted. 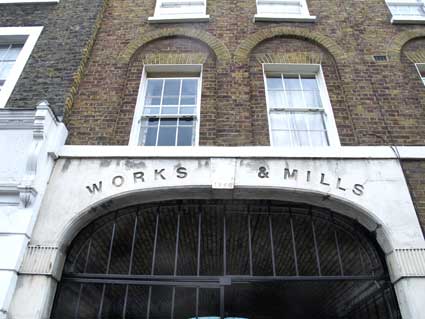 The arched entrance with incised characters is in in a row of early Victorian houses in Balfe St (behind Caledonian Road) in Kings Cross. The small, white painted '1846' date is in the 'keystone' in the centre. Described by one image collector as: "An inviting archway [looking into the Regents Quarter] on the west side of the street at number 17 leads into Albion Yard where blue, for washing white clothes, was manufactured." 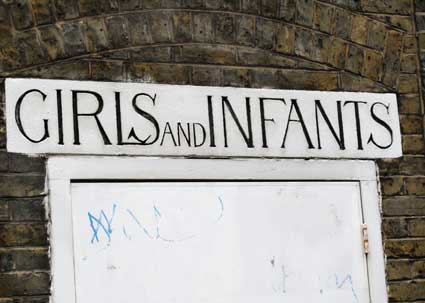 Photograph courtesy David Gaylard
St Patrick's School, Secker Street near the junction with Cornwall Road is the location of the 'GIRLS & INFANTS' sign in vernacular font. We think we could call that intriguing overlap of 'L' and 'S' a kern.