Beccles
A town of gates, scores and staithe

Let's start in Hungate, a fair distance out of the town centre. Here is a fading sign:

over a large-ish shop width (compared to its neighbours which are small and, in some cases, still struggling on in business). The lettering before this - more clearly seen in the upper close-up) which runs behind the drainpipe to the left is possibly 'NEW', but the premises are clearly an old workshop which has long been converted into a house. 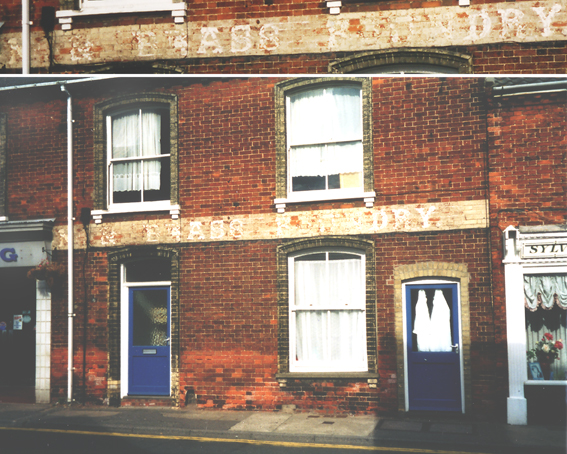 2003 images
[UPDATE 7.2012. John Field got in touch via our email to say: 'Many years ago I was told that the family had a foundry in Beccles; my  father used to tell me many stories when I was a boy but, like lots of boys, I did not pay as much attention as I should have done and many of the fables(?) have been forgotten. Dad was born in Beccles  and, I believe, went to Beccles College before being sent as a boarder to Culford for playing truant and taking his boat sailing on the river.  [With regard to the] 'Brass Foundry' I was told many years ago that the foundry was owned by my  great grandfather. He also used to tell me about a factory owned by the family that made clay pipes, saying this was one of the first factories in England. [He was a] Church warden I believe. This factory was pulled down and a row of cottages built in Peddars Lane This may have been owned by the Fields or the Copemans(?), Dad's mother being a Copeman, that also being my second name. I don't know how much of this is fact or legend. Hope this may be of interest.' John Field]
[UPDATE 11.8.2021: 'I was in Beccles last week and noticed the old signage on the wall of the house/shop in Hungate. I thought I would research this but came up with not a lot except for your web site. I see that you read it as NEW[?] BRASS FOUNDRY. I read it as N & BRASS FOUNDRY, the N being the last letter of another word and what you saw as the W in NEW being an ampersand (&). IRON was the first thing that sprang to mind. A bit more web searching lead me to  (on the The Foxearth and District Local History Society website) which seems to indicate that my thought was correct and it was IRON & BRASS FOUNDRY many years ago. Kind Regards, Andrew Phillips. Many thanks to Andrew for the clarification.]

Nearer the centre is the painted 'BLYBURGATE' street sign, one of several in the town - the 'Northgate' one out towards the Smith and Easthaugh sign (shown below) is virtually unreadable.

The high relief lettering cut in a cement panel and in-filled with black 'BARCLAYS BANK' overlooks the market. It makes an interesting comparison with the 'Bank' sign near to Cornhill in Ipswich and another in Felixstowe.

A few yards away from Barclays Bank to the left of the above picture is the narrow entrance to 'HORSE & GROOM LANE'. This fine decorated piece of street furniture has a rich relief colour with the lettering picked out in white. It stands up well against the spray-can graffiti above it.

2006 images
Returning to the top of Blyburgate, we find one of the largest set of date numerals on a building seen anywhere: '1700'. This patchwork quilt of an end wall is at the side of Toby's Fish & Chip shop, close to the passage leading to the public library. Quite what came over the bricklayer who had already laid the dark brick lattice design in the lower courses of the wall, but we're glad it did. Those sensuous tails on the figures one and seven are the icing on the cake. This is in the running as the oldest example of lettering included on these sites (others might be the stabling lettering at East Bergholt & Stradbroke, the 1650 sundial on the Moot Hall in Aldeburgh  or even the 'Smith & Easthaugh' sign at the bottom of this page - although it has an archaic 's', it does read a bit too industrial revolution, however).

Smallgate runs away from the market square and on it, at the crossroads, stands the cream painted stucco building labelled in very large black capitals in a cartouche: 'PUBLIC HALL.' (with its delightful, but wholly unnecessary full stop). This attractive building is clearly used for regular bingo sessions and other entertainents, but is marred by the usual clutter of modern signs and street furniture. 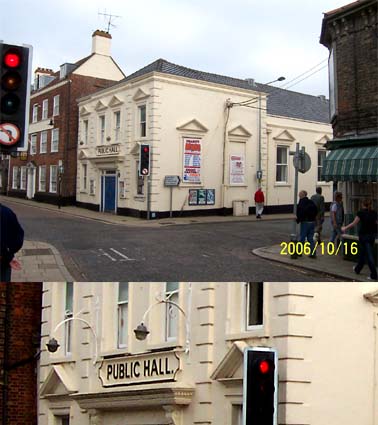 In Saltgate, not far from the market square, we find another fine building, well cared for, and boasting a wonderful coloured, curving sign - now, sadly misleading and redundant: 'Cinema' in gold mosaic lettering on a two-tone blue ceramic background. The town lost its cinema at least ten years ago, we understand, and this finely detailed building with its crest, square columns, pediments and roundels was later a shop and now (2006) one of the continental cafés so ubiquitous in our towns. 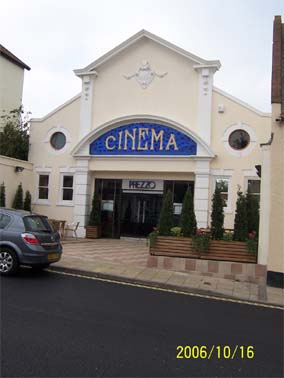 Following this street out of town towards the river, we move into Northgate and further down the hill past fine Georgian houses (and several plaques to comemorate the great and the good who once lived there), is one of the best lettering examples to be found on these websites: 'STAITHE,  SMITH & EASTHAUGH, CORN & COAL MERCHANTS, Dealers in Malt & Hops of the best quality. BEANS, PEAS, OATS, POLLARD, CINDERS, WHOLESALE & RETAIL, Wherries constantly attend the Traders & Steam Vessels for conveying goods to and from the Wharf.' This is a grand, historic piece of trader's sign writing. Glimpsed as we drove through the town down this winding narrow road in 2001, we were able to stop for the 'Brass Foundry' above, but not for this one, so it's been added in 2006. (It was also mentioned to Borin by Robet Malster - see Reading List - when the former gave a talk to the Suffolk Local History Council in 2004.) Now somebody - presumably the owner of the wonderful redbrick house which stands at right angles to the road and on whose end wall the sign is painted - obviously cares for this lettering and it looks to be regularly retouched judging by its almost mint condition. We owe the preservers of this sign a debt of gratitude. 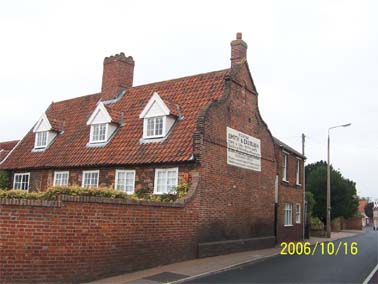 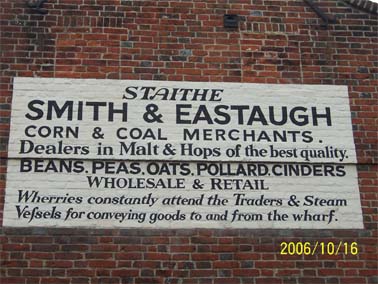 The dormer windows of this property suggest that this has always been a dwelling place - presumably that of either Mr Smith or Mr Easthaugh - rather than a converted storage barn or maltings. The whitish painted rectangle runs over bricked in windows of a dutch gable end and is bisected horizontally by a line caused by the lower brickwork being recessed slightly from that above. A delightful mixture of fonts and styles is on display here: Italic, serifed caps at the top with the decorative 'A', san-serif caps for the name and trades are followed by a full stop. Then follows a line of serif roman lettering with 'Malt' and 'Hops' bearing capital letters; back to sans-serif caps for the list of further products this prodigious business dealt in; 'Wholesale & Retail' balance on a fine ampersand in serif capitals, then the final triumphant announcement with its direct link to the nearby wharf and the attendant wherries which used to lighter bigger trading vessels. The archaic 's' which resembles an 'f' in 'Vefsels' at lower left may suggest that this sign is older than it actually is. If we assume that the industrial revolution started around 1770, it's possible that steam vessels were visiting Beccles from around the mid-1800s or later, perhaps. The signwriter was pleased to provide us with the double-s of old and new style characters. We have gone into some detail on this sign merely because of its great historical importance in Beccles, in Suffolk and in England as a whole. We would be pleased to hear of a rival elsewhere.

[Message from Ed Broom of this parish (15.11.06): 'Love that STAITHE,  SMITH & EASTHAUGH entry, and so well maintained. Hats off. That mix of fonts and styles rather reminded me of an old ad for my distant relations (true), the Freston Bros of olde Ipswiche towne.' His website is on our Links page.]