2014 image
This composite image (there isn't an angle in the wall to the right of the entrance) shows the sweep of the baths facade with, to the left the end of St Clements Church Lane, the car park and behind that The Foyer (formerly Ransomes lawnmower factory) and, in the right background, Fore Street and – peeping over the ancient buildings – the chequered University College Suffolk building. The pub sign of the Lord Nelson public house can be seen just above the cars and an 'Ipswich Corporation Water Works' hydrant cover can be found on the pavement between the baths and the Lord Nelson.
The Lord Nelson
"Set in a small part of the historic port area still surviving. It retains a half-timbered front with dormer windows... The building dates from the 17th century, though the brick front was added in the 20th. A building close to this site (between 1790 and 1805) was called the Noah's Ark. In 1805 the new name of the Lord Nelson was first noticed in the Overseer's accounts of St Clement's parish. The license to trade in intoxicating liquor (dated 1811) is extant and cost ú9 indicating that the establishment was more than just a common beerhouse. The pub may have been renamed when Lord Nelson was appointed as High Sheriff of Ipswich (1801). It was purchased by Adnams & Co [of Southwold] in 1989 from Tolly Cobbold. It retained two bars and a separate restaurant room until 1995 when major internal alterations were undertaken." [Information from Suffolk CAMRA; see Links] 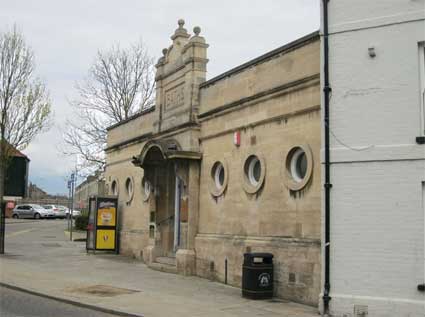 2012 image
At the lower end of Fore Street (close to the Isaac Lord buildings accoss the road) is the stone fascia of the earliest swimming baths in Ipswich, built in 1894. In fact, it's the second oldest operational swimming pool in the country. The narrow frontage boasts deco-style porthole windows and an imposing entry with canopy:

in chiselled lettering and ball finials. 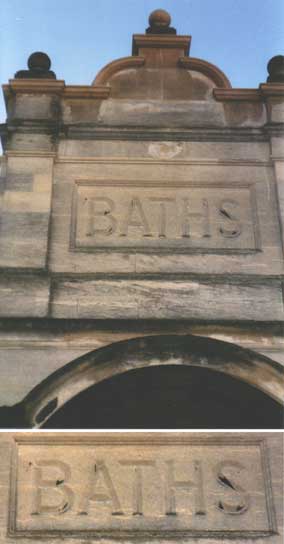 Swimming is Britain's most popular participation sport. Nearly one in five people swim at least once a month, with around 80 million visits to swimming pools recorded every year. But what of the pools themselves? Surprisingly, although public baths have formed a vital part of community life since an 1846 Act of Parliament, their story has never been told in popular form. See our Reading List for details of the book 'Great lengths' which documents it.

The book traces the social and architectural development of indoor public baths and pools, from the earliest subscription baths of the Georgian period to the current generation of leisure pools with their flumes and potted palms.

The golden era of pool design fell between the 1880s and 1914, when over 600 baths were constructed, many of them rich in architectural detail and technological innovation. In Manchester, the magnificent Victoria Baths, completed in 1906 - and in 2003 the winner of BBC Television's popular Restoration series - set new standards for opulence, with three separate First and Second class pools for men and women, Turkish Baths, gorgeous tiling and extensive laundry facilities. Birmingham's Moseley Road Baths (1907), London's Haggerston Baths (1906) and similar establishments in Hull, Nottingham and Glasgow equally reflected the civic pride of their creators, as greater awareness of hygiene and physical fitness brought safe swimming and recreation to the urban masses.

A further burst of activity between the wars saw a new generation of concrete and glass Art Deco baths built in London, Birmingham and Liverpool, as well as Northampton, Wakefield, Rochdale, Crewe and Blackpool. In the 1960s these were joined by classic Modern designs in Coventry, Crystal Palace and Edinburgh. 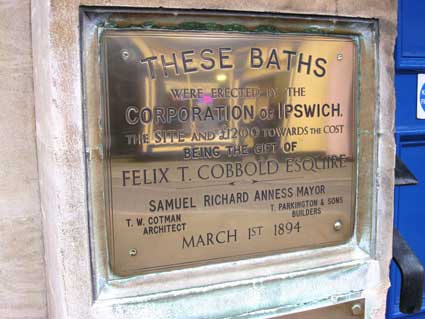 'THESE BATHS
WERE ERECTED BY THE
CORPORATION OF IPSWICH.
THE SITE AND ú1200 TOWARDS THE COST
BEING THE GIFT OF
FELIX T. COBBOLD ESQUIRE
-
SAMUEL RICHARD ANNESS MAYOR
T.W. COTMAN
ARCHITECT
T. PARKINGTON & SONS
BUILDERS
MARCH 1ST 1894'

Felix Thornley Cobbold is one of the great names in the town. Fore Street Baths is one of several principle features of Ipswich for which he was responsible, not to mention Christchurch Mansion and Park. He became an extremely wealthy man, and in common with his forbears used his wealth generously to benefit the community. He donated to Ipswich, land for St Clement’s Baths (Fore Street Baths); a clock and carillon for the nearby St Clement Church and 45 acres of Gippeswyk Park plus cash for fencing. In 1894 he purchased Christchurch Mansion from a syndicate which proposed to demolish it for redevelopment, and presented it to the Borough of Ipswich to establish a Museum and Art Gallery as long as the Borough purchased the surrounding park. In his will left a further ú20,000 in Ipswich Stock, the interest of ú600 per year accruing therefrom to be used for the purchase of artworks. His patronage of agriculture is continued by the Felix Thornley Cobbold Agricultural Trust through the award of grants for the betterment of farming practice in Suffolk and the adjoining counties. (See Links for the Cobbold Family History Trust.) We believe that he may be commemorated by 'Thornley Place' facing onto Chevallier Street.

From here it's a short walk to St Clement Church, Martin & Newby, the Meremayd, 'Palmer's Door Mats &c.' and The Unicorn.