East Suffolk Militia Depot
Here's the text of an email from Mike O'Donovan (19.10.2008):
'Attached are two photos relating to the Militia Depot. They are on one of the walls of Ipswich Preparatory School in Ivry Street and it took me ages to discover them. Hope they transmit OK. 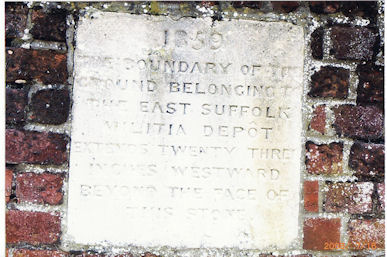 '1859
THE BOUNDARY OF THE
GROUND BELONGING TO
THE EAST SUFFOLK
MILITIA DEPÔT
EXTENDS TWENTY THREE
INCHES WESTWARD
BEYOND THE FACE OF
THIS STONE.' 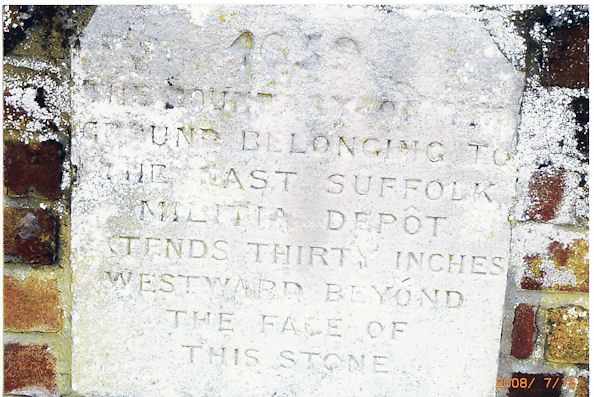 The second one [which seems to have its corners trimmed to form a cartouche] reads:

They are all that remains of the historic building.'
Our thanks to Mike for finding these specimens and, indeed deciphering the weathered lettering. The circumflex accent over the 'O' of 'Depot' is a remnant of the French dépôt, from Old French depost, from Latin dēpositum, something deposited, from neuter past participle of dēpōnere, to put down, deposit. It's interesting that the word as inscribed has, meanwhile, lost its acute accent over the 'e'.

[UPDATE 12.2.2012: We are indebted to The Ipswich Society slide collection (see Links for their Image Archive) for this undated photograph to complete the Militia Depot set.] 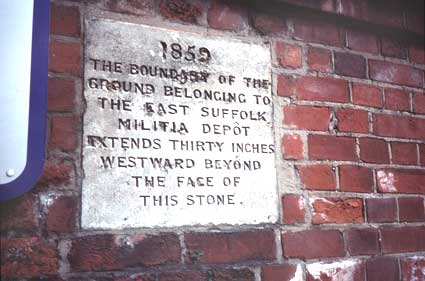 We believe that this example is distinct from the one above it because, although the texts are identical, the shape of the stone and the surrounding brickwork appear to differ. 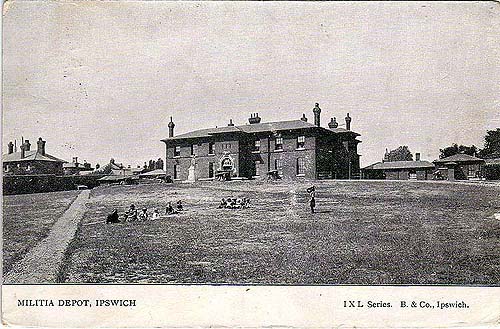 The Suffolk Regiment was originally raised by the Duke of Norfolk in 1685, as the 12th Regiment of Foot, to suppress the threatened Monmouth Rebellion. Their first stations were at Great Yarmouth and Landguard Fort in Ipswich. King James II was a Catholic King and many of its original officers were Catholics but when he fled to France, the whole army, including this Regiment, would not support him further.

Their first actions were to be in Ireland actually fighting against James. They stormed Carrickfergus Castle and were in the Battle of the Boyne on 6 July 1690. Gradually the links to Suffolk strengthened as more and more recruiting was done in this County. In 1782 it became the East Suffolk Regiment but the Depot of the Regiment was finally established at Bury St Edmunds in the Gibraltar Barracks in 1878.

The 4th Battalion of the Territorial Force (later the TA) was established in 1908 in East Suffolk and the 5th Battalion in West Suffolk.

The 1902 map below shows that the Artillery Barracks relating to Barrack Lane and Barrack Corner on Nowrich Road/St Matthews Street (the area now occupied by Geneva and Cecil roads) stood opposite the Militia Barracks on Anglesea Road.

1902 map
In modern times, Ipswich (Public) School runs The Lodge Day Nursery which caters for children from three months to three years; it is housed in what was originally the Adjutant’s house from the former Militia Barracks, now Ivry Lodge, 38, Ivry Street. 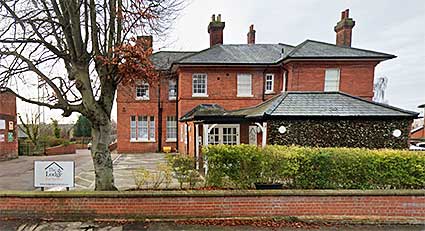 Click for more about Boundary markers, particularly of the Artillery Barracks.

Around the time of the Napoleonic Wars (1803–1815), there were two other less permanent barracks in the town.  One was Stoke Bridge Maltings, situated by the river, which were converted for the purpose. The buildings later reverted to maltings. There is no visible evidence today of the second site: a wooden hutted camp known as St Helen’s Barracks that was situated at the top of Albion Hill,  just north of Woodbridge Road in the vicinity of Brunswick Road (which still has a kink in the carriageway to indicate the extension of the road after the demise of the barracks), Belvedere Road (formerly Parade Terrace) & Parade Road, which still exists. This too closed about 1815.