Leonard Woolf reminded us of this striking example of historic lettering in Rushmere relating to Rushmere Common. 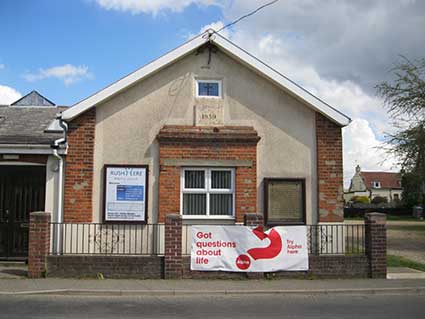 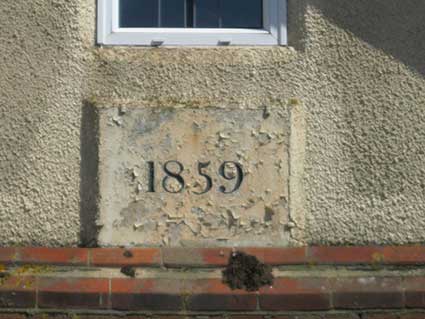 Rushmere St Andrew is a north-eastern suburb of Ipswich which is home to some 30,000 people. However, the village retains a rural feel, surrounded as it is with fields and trees. The Baptist Chapel was built in '1859', the date prominent on the front of the original building; the more modern extension is to the left. 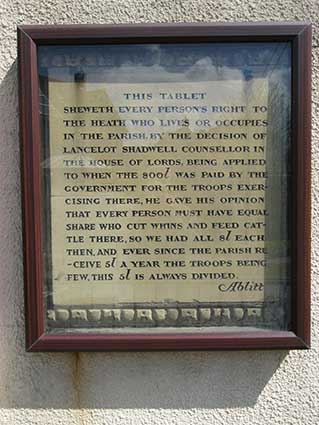 2016 images
Nathanial Abblit championed the commoners' rights and in 1861 he had a stone tablet erected on the outside of his cottage. Once Ablitt's Cottages were demolished, the tablet was mounted in a glazed case on the wall of the Baptist Chapel which stands in The Street close to the top pond. The tablet reads:

'THIS TABLET
SHEWETH EVERY PERSON'S RIGHT TO
THE HEATH WHO LIVES OR OCCUPIES
IN THE PARISH, BY THE DECISION OF
LANCELOT SHADWELL COUNSELLOR IN
THE HOUSE OF LORDS, BEING APPLIED
TO WHEN THE 800l PAID BY THE
GOVERNMENT FOR THE TROOPS EXER-
CISING THERE, HE GAVE HIS OPINION
THAT EVERY PERSON MUST HAVE EQUAL
SHARE WHO CUT WHINS AND FEED CAT-
TLE THERE, SO WE HAD ALL 8l EACH
THEN, AND EVER SINCE THE PARISH RE
-CEIVE 5l A YEAR THE TROOPS BEING
FEW, THIS 5l IS ALWAYS DIVIDED.
Ablitt'


This takes a little intepretation. (1) The large italic 'l' must be a version of the pound sign, but placed after the number. The current '£' symbol (written in an old-fashioned handwriting style and with one or two crossbars to show that it is being used as a symbol or abbreviation) derives from a capital "L", representing libra, the basic unit of weight in the Roman Empire, which in turn is derived from the Latin name of the same spelling for scales or a balance. It was used as a unit of currency, divided into 240 pennies, in Anglo-Saxon times. (2) 'Whins' is the Suffolk dialect word for gorse bushes. (3) Sir Lancelot Shadwell (1779-1850) was a barrister at Lincoln's Inn and was Member of Parliament for Ripon from 1826 to 1827 before becoming Vice-Chancellor of England in 1827.

Rushmere Common has probably been common land since the Middle Ages. For at least two hundred years, the ownership of the soil was claimed by one of the local manors. The commoners resisted the claims of the Lord of the Manor, the Marquess of Bristol, who tried to prosecute some of them. It was used as a place of execution, with some one hundred recorded hangings between 1735 and 1797 – most frequently for house breaking and burglary, but also for highway robbery and murder; the location of the gibbet was close to the junction of Woodbridge Road and Playford Road. The heath was frequently used by the army and in 1804 Sir James Craig had 11,000 men under arms on the common. A Commoners Committee was established to manage the common in 1881. 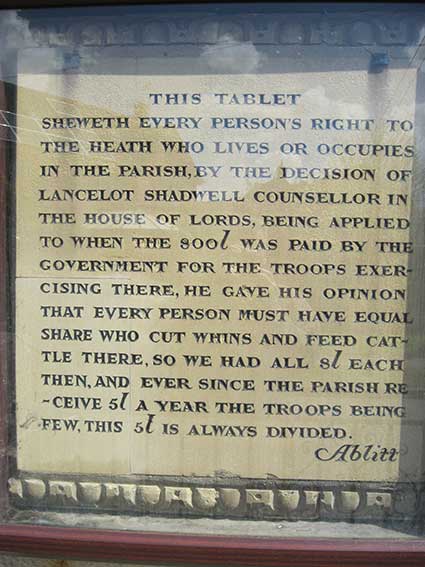 A portion of heath was used as exercising ground for troops stationed in Ipswich (1891). £20 was paid to parishioners by the Government for damage to the heath by troop activity whilst the War Office paid 5 shillings p.a. to the Lord of the Manor. A row of cottages in the village contained the plaque which was relocated to the Bap tist Chapel when they were demolished.

Leonard Woolf has also kindly supplied an article from The East Anglian Magazine dated November 1961 entitled 'Nat Ablitt (1784-1865) – the Rushmere Eccentric' by Walter Tye. Click the title for a PDF file of the article.
Nat Ablitt lived at Little Roundwood close to the parish boundary and also to The Roundwood, home of Lady Nelson (see our Dated buildings page for more on this). The tablet shown here was comissioned by Nat Ablitt and fixed to his cottage ('tablet cottage'), now demolished, in 1861 where he lived from 1841 to 1865 (6?) whe he died. At the time of the 1961 article a home for the tablet was being sought. The nearby chapel, only six years old when Ablitt died, was an obvious solution. 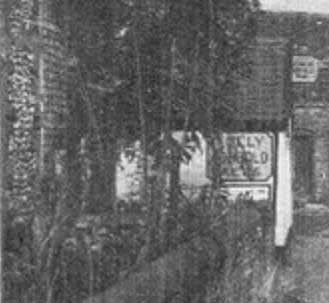 pre-1961 photograph
One feature highlighted by the photograph (on page 47 of the above PDF) of the corner on Rushmere is the presence of a public house or off licence bearing the familiar 'TOLLY COBBOLD' sign.