Sadly, in January 2018 Ipswich lost a small but important fragment of its social and economic history with the demolition of most of the former Rose & Crown public house on the Bramford Road/Norwich Road junction. We understand that, during extensive interior alterations to create a community centre, builders deiscoverd that the whole structure was unsafe. 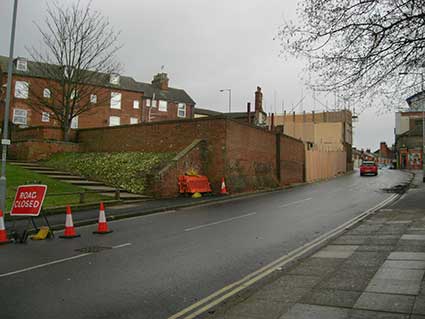 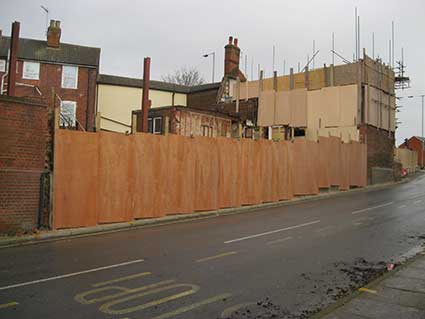 2018 images
The view from Bramford Road of the site and the Norwich Road junction shows the dramatic change with much shuttering in evidence. The only section of redbrick walling here remaining is that section bearing the rather run-down 'Bramford Ro...' street nameplate. 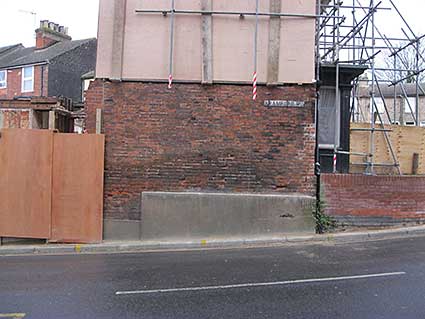 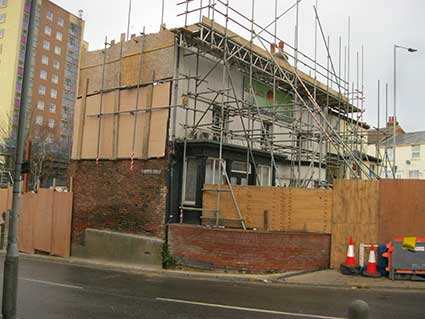 More or less the only part of the old Rose & Crown remaining in early February 2018 is the fascade and carriage entrance which runs beneath the next door travel agency officees. All are supported by extensive scaffolding. 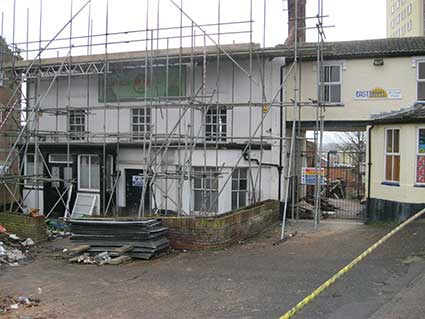 This has resulted in this lettering example being added to our These we have lost page. 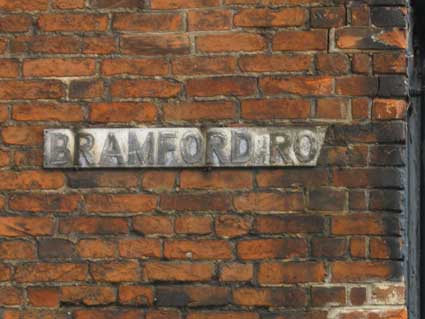 2014 image
Above: the broken 'BRAMFORD ROAD' street nameplate on the Rose & Crown; an equally battered street nameplate can be found on the former A.A. Gibbons building on the corner with Benezet Street.

Anyone walking regularly down Bramford Road from the busy junction with Norwich Road could easily miss this most elusive sign. The side wall of the Rose and Crown public house with its frontage and small triangular car park on the corner, extends down Bramford Road with the meeting room above. One can only conjecture the way in which the buildings were once put to use. The sign clearly states:

The whole wall itself tells a story. One window bricked up, another cut into the wall right in the middle of the sign; some of the lettering obscured by a vertical iron wall truss and down-pipe. 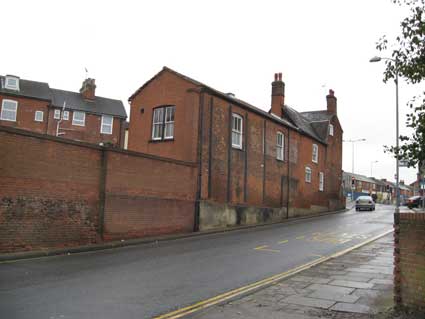 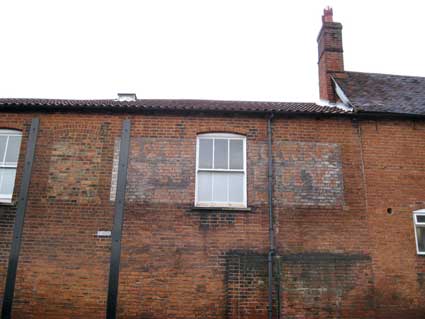 2012 images
Above: the brick walls of the rear yard, the hall/meeting room which bears the lettering and the public house furthest from the camera with the junction of Bramford Road and Norwich Road at far the right. By July 2011 this pub closed with plans to turn it into a Kurdish centre and when these photographs were taken it looked as if people were repairing cars in the car park at the front. 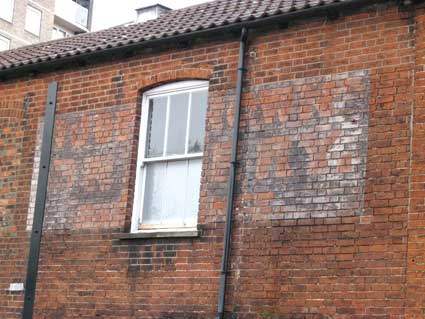 By 2012 the black background and characters are bleaching and patchy (last photograph shows Cumberland House in the background).

Below: Those fugitive characters, in close up and enhanced, with heavy drop-shadow (plus two full stops) on a black painted panel.
[UPDATE 23.2.08: New management at the Rose & Crown has resulted in the upstairs meeting room at the rear of the premises (the outside wall of which we show here) being stripped back to bare brick and boards, to be used as a music venue. Vestiges of the old brewery can be seen - or imagined -  the 'rough hewn' look of the room adding to the period feel. However, it is closed in 2012.] 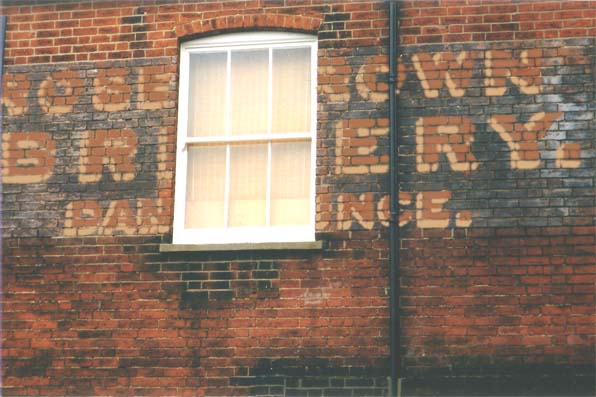 [UPDATE 5.1.10: Dave Riseborough tipped us off about the CAMRA website (see Links) which contains fascinating historical background to some of the pubs featured. "Concerning the "DAN....INCE" letters under the Rose And Crown Brewery sign, something which I have wondered about since I was a child, I note that on the Suffolk CAMRA pub website the Rose And Crown had a landlord named Daniel Vince between 1855 and about 1879 - so maybe it is his name there." Here's a summary from that CAMRA page:

"1830s brew pub
My Parents Charles and Hilda Elvin were the licensees from 1944 to about 1948, after being bombed out of the Malthouse Pub in Ipswich. My sister Mary was born at the Rose and Crown on the 13th July 1946 and it has been suggested that she was the only female child ever born there? We moved to New Zealand in 1950 and I currently reside at the Gold Coast in Queensland Australia. (information from Geoffrey Elvin)

In the 21st century we are experiencing a growth in micro-breweries, often selling craft beers through limited outlets. This lettering reminds us that small brewing operations behind or below licenced premises (or in private houses), such as the St Jude's brewery are nothing new. Of course, the story of large-scale, commercial brewing in Ipswich, given its strength in malting barley, has left its mark on the town: The Unicorn Brewery (Catchpole) and Cliff Quay Brewery (Cobbold) still stand. Tollemache's Steam Brewery in Tacket Street and others have long disappeared. 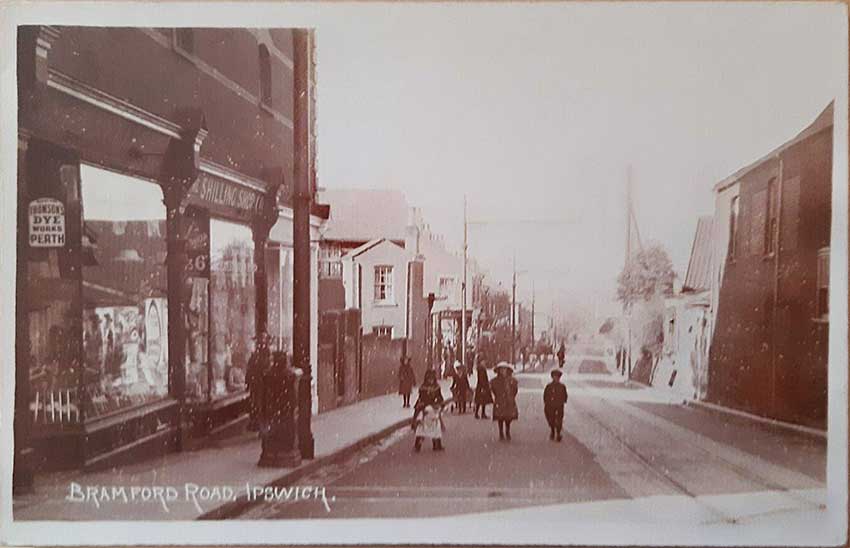 [UPDATE 16.3.2020: Lisa Wall has sent the above image. This is taken from just below the Benezet Street junction at the top of Bramford Road. We would guess that the date might be around 1910. What is interesting is the building to the right which, at this date, has at the second storey, second window in which already pierces the advertisement panel for the Rose & Crown brewery, unreadable here (also the down-pipe is in place). The vertical metal braces holding the wall – until recently – aren't visible here. The licensee was Daniel Vince (as shown on the old sign and in the publicans list above) between 1855 and about 1879, so that fits with the assumed date of the postcard (c.1910). The window must have been cut in the wall between c.1880 and 1910(?). The 'Shilling Shop' is visible at the left with an advertisement nearer to the photographer reading:

The decorative dividers between the shopfronts can still be seen today, but the further two, including the 'Shilling Shop' have been bricked up.] 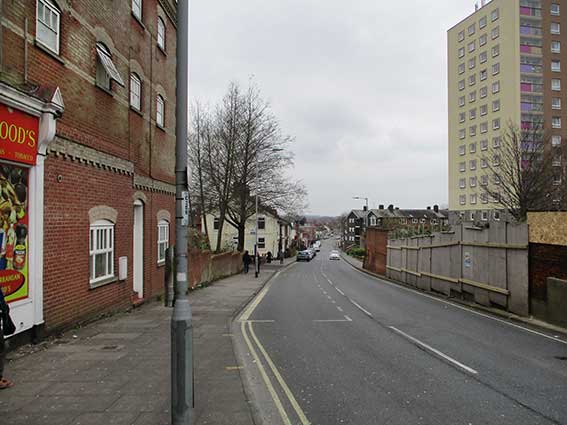 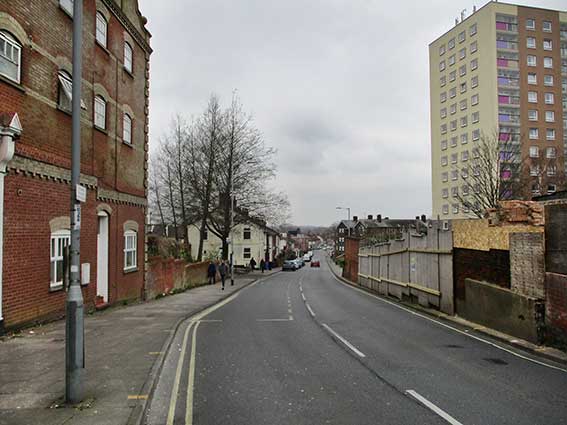 2020 images
The above 2020 photographs taken from slightly different angles (the right-hand one from a rather more life-threatening position in the carriageway) show a similar view to the postcard above (although modern camera lenses clearly differ from Edwardian ones). The shop divider with its triangular top can be seen at the far left and the rendered section of brickwork just above the kerb which has been painted black can bee seen at the far right – the closest end marks the corner of the pub frontage as it once stood. It is clear that additional windows at first floor level of the former flour mill were cut through when it was converted to accommodation. The brick quoins on the edge of the old mill can be seen, with the ball finial just visible at the top. The jumble of shuttering at the right tells its own story of a sadly abused pub building which, when these photographs were taken in March 2020 was nearing total demolition as shown below. 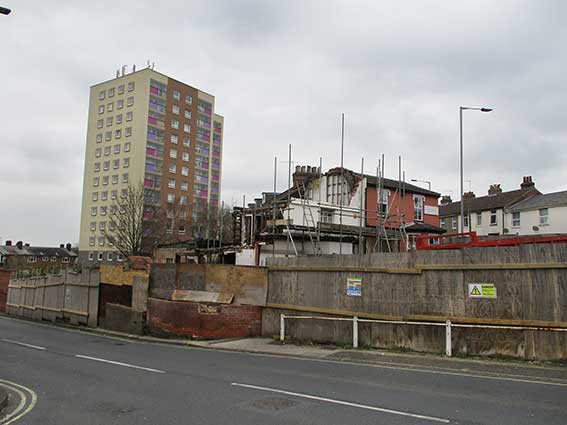 March 2020 image
Above: the wrecked former Rose & Crown has almost disappeared and the red-painted building to its right shows that the Easttravel agency is still functioning, even though its shared wall with the pub is now exposed. Cumberland House rises in the background.

Just around the corner in the narrow Gaye Street was the somewhat mysterious, modern, bricked up shop frontage bearing the initials 'TFL' (what challenges would have faced the bricklayer if one of the initials had been an 'S'?). This laid back from the corner with Benezet Street.
[UPDATE 23.2.08: This example has now been demolished and builder's shuttering now surrounds the corner site. Note that Slavery abolitionists, celebrated in Ipswich street names – someone once said that they included a Quaker called Claude Gay(?) – even though this street name includes an 'e' at the end.] This area was demolished and redeveloped as housing, post 2008.