The Brewery Tap ('The Cliff') 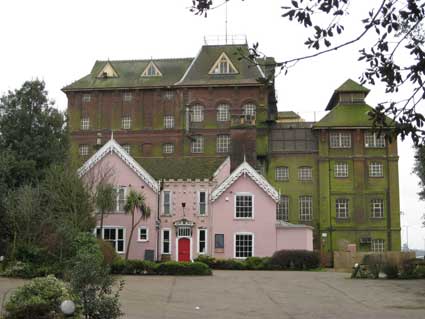 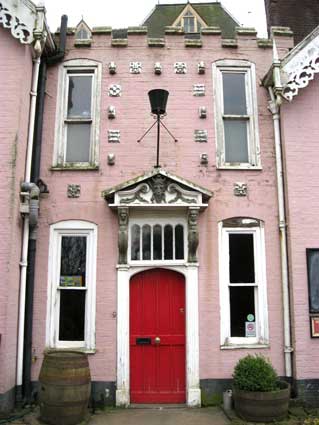 2013 images
Above: the view across the car park from outside the earlier Cliff Cottage. And the main door into 'The Cliff' (Anthony Cobbold of The Cobbold Family History Trust – see Links – tells us that 'Cliff House' was a Cobbold property in Felixstowe), the original residence of the Cobbolds on this site, built before 1746 and then not overshadowed by the later Victorian Brewery building. Before this, the Cobbolds lived at The Manor House on St Margaret's Green, Ipswich which still stands and is enshrined in legend as the place from whence Margaret Catchpole stole John Cobbold's prize horse in 1797 and rode to her lover in London. The Cliff is known today as The Brewery Tap public house and restaurant. The studded style of door can be found elsewhere on the site. The beacon/brazier was run on gas and blazed for several years in the 1990s at the front of the building while it was also the entry to the Brewery Museum.

"In 1798 John Cobbold (1745-1835) – the grandson of Thomas Cobbold (1680-1752), the company founder (famed for his two wives: 'Elizabeth I' and 'Elizabeth II' and a total of 22 children) moved the family to The Cliff. He and his parents had been buying parcels of land in that part of Ipswich since the 1740s and in 1811 John was able to buy Pitt’s Farmhouse which formed the basic U shape of the Holywells mansion which he built in 1814." The land was eventually given to the Borough and opened to the public as Holywells Park in 1936; the mansion was sadly demolished in 1962. Tollemache and Cobbold breweries merged in 1957 and the noble family of Tollemache, with their seat at Helmingham Hall, must have agreed to the rather familiar contraction 'Tolly' to make a combination brand name which rolls off the tongue.

The grotesque caryatids ('satyresses') seen on the nearby Cliff Cottage appear again over at least two of the doors. They appear to be machine-made and of poorer quality in their carving to those on The Old Brewer's House. 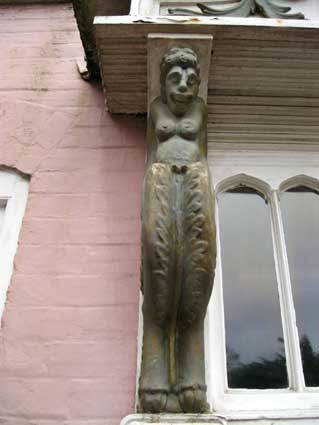 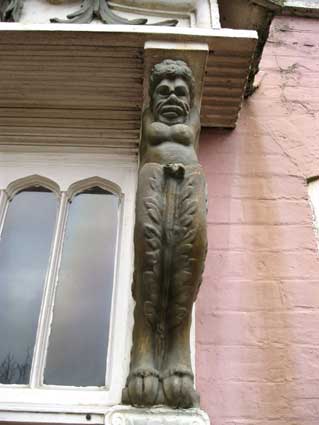 They support a bizarre structure featuring the large eared, horned head of another Green Man with foliage escaping from its nose. 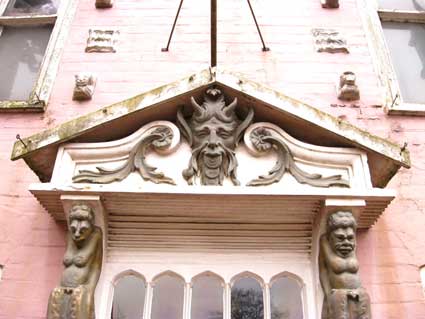 The front wall is studded with motifs and heads, some painted silver with (below left) heads positioned low down either side of the doorway. 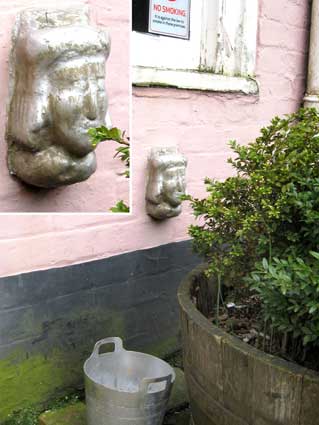 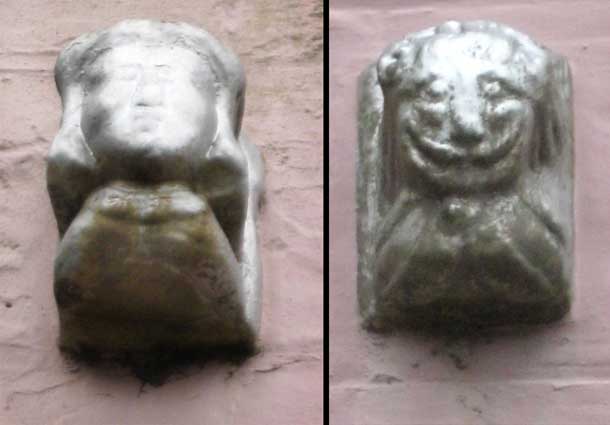 Listed Grade II as 'Cliff House' the description reads:
"An C18 timber-framed and plastered building with early-mid C19 additions on the north end. The C18 block faces west to the quay, 2 storeys and attics. 2 window range with a lower extension of 1 window range at the south end. The ground storey has a large early C19 bay and a C20 entrance porch. The west front comprises 2 gabled wings with ornamental bargeboards and a centre part with a castellated parapet. 1:2:1 window range. The winders generally are double-hung sashes with glazing bars,The north central doorway has a large mullioned fanlight and an ornamented pediment on brackets carved with figures. Roofs tiled with a modillion eaves cornice on the brackets carved 2 flat headed dormers between the C16 and C19 blocks there is a tall C19 chimney stack."

The main brewery buildings
Looking round the building on the river side, past the picnic table is a shuttering wall over which a very pink doorway can be glimpsed. The algae on the brickwork in 2013 is very striking here. 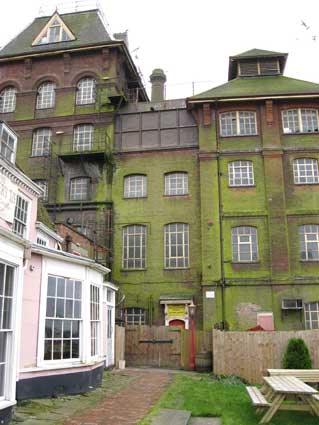 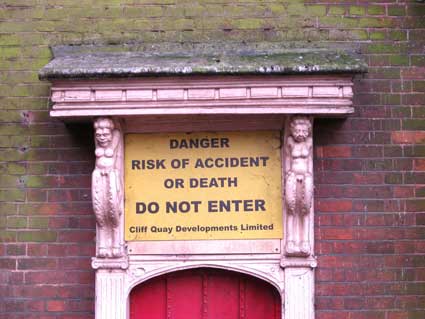 High above the doorway is a water tank formed between two towers by riveted cast iron platework, each plate carried the name of the manufacturer in a cartouche: 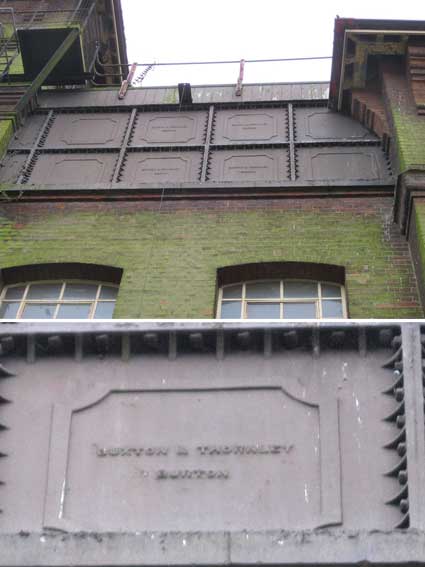 The firm of Buxton and Thornley was based in Burton-upon-Trent and specialised in machinery for the brewing industry. When the brewery was open for tours in the 1990s, a notable feature was a static steam engine restored to working order which was designed to pump spring water up to the storage tank at the top of the building. We wonder if this was a traditional brewery steam engine and if it is still in situ.
The Grade II Listing text for the brewery buildings:
'Tower brewery. 1896, by William Bradford. English bond red brick; hipped slate roofs with crested ridge tiles and moulded brick eaves brackets. L-plan. All elevations have segmental arches over cast-iron windows with middle-hung casements. 5-storey and attic block to north-east, of 2 (east) by 6 bay north elevations with 3 semicircular arched fourth-floor windows, gabled dormers and hipped-roofed lantern to viewing platform to rear; linked by 2-storey, 2-window range, surmounted by panelled cast-iron water tank and with reset early C17 studded door set in Tudor-arched architrave with overlights flanked by fluted pilasters to primitive caryatids supporting dentilled flat hood, to 4-storey and attic block to north-west, of 2 (north) by 3-bay (west) elevations, and 5-bay block to south-west articulated by raised pilasters and surmounted by louvred lantern to north-west and glazed lantern to south west. Interior: Fermentation tanks and tuns mostly replaced in C20; wrought-iron roof trusses to fermentation rooms, one of which (to south west) has reset copper brewing vessel of 1746; post and pad roof to granary; small steam engine by ER and F Turner.
[UPDATE 28.9.2019: Note that during the early 21st century (and probably before) criminals wrought terrible damage on the brewery with most of the metal fittings including copper brewing vessels being stripped out and stolen. We understand that the Turner steam engine is still in place. However, the fabric of the building has suffered great neglect.]

The Beer Garden entrance
To the left of the main entrance is a skirt brick wall under the trees with a studded gothic-shaped door with matching window. The pathway is composed of bricks and tiles, some of them lettered. Presumably this particular colour just happens to have the manufacturer: 'HARRIES-PEARSON, STOURBRIDGE' on the flat side and one couldn't lay the brick the other way up as that would feature the 'frog', the deep well which takes the mortar. Not suitable for a path. The company was founded in 1860 and operated from its Black Country offices until 1980/1990. 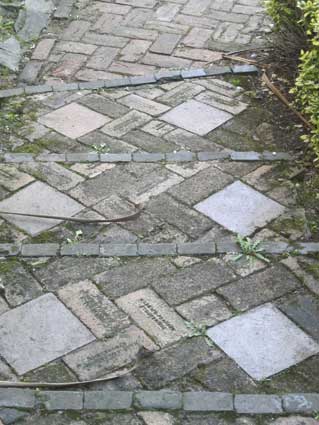 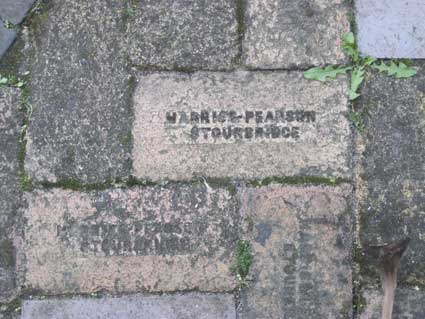 Behind this is the tiny beer garden. Further up the slop and round to the right, the way was blocked in February 2013, but the view over the shuttering is shown below right with, oddly a marquee/gazebo in view. 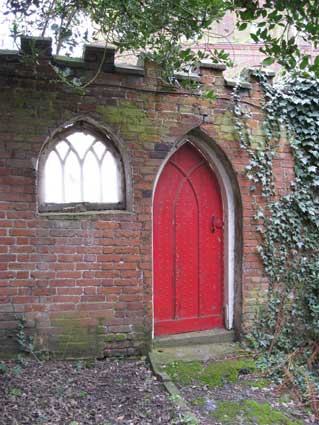 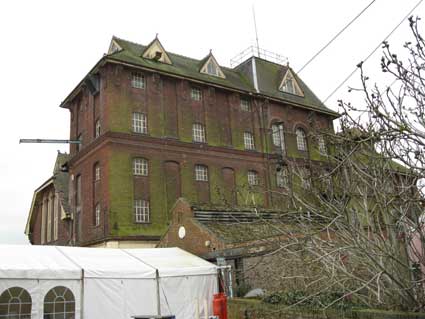 The main entrance to the yard
Further round and up the slope are the impressive main gates to the old brewery yard. 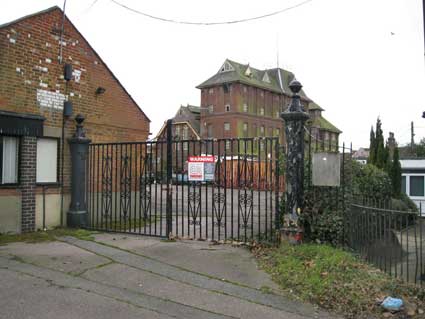 The gate post to the left is sheltered by a building; that to the right has weathered more noticeably, the peeling paint resembling an avant garde work of art. The 'flying saucer' finials are rather fine. 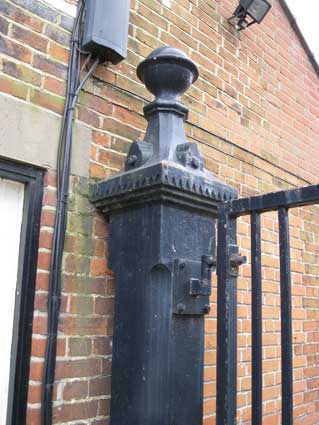 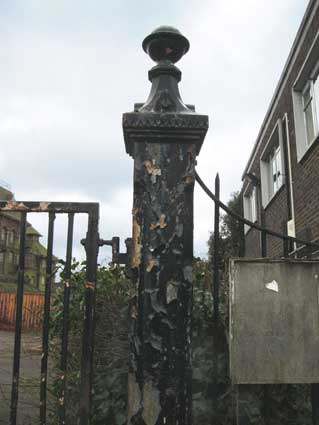 The views of the brewery complex aren't familiar to many passers by on Landseer Road. The blue glass in the lantern in the shorter tower was thought to help fermentation and not spoil the brew with sunlight. When we look at the Cliff Brewery now what we see is basically the brewery that was rebuilt and extended between 1894 and 1904. Large sections of the old brewery were demolished during this time and what original parts survived were pretty much erased during the 1904 expansion. To achieve industrialisation of the brewing process, designs of the day made use of gravity - the so-called tower brewery - so the raw materials started at the top and made their way downwards, via the brewing process, to be matured and put in casks at the bottom. Over a two year period from 1894 to 1896 a new brewery replaced what went before but it was a staged process and was probably carried out by Cobbold's own people. Certainly the driving force behind the design was William Bradford & Sons, the eminent London brewery architects (see also The Unicorn Brewery), but the development probably retained some parts while others were rebuilt. 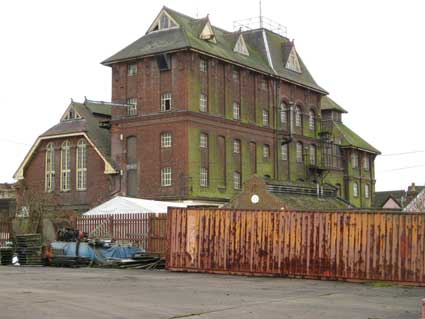 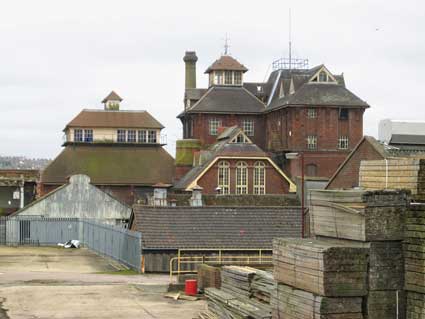 For a view of the brewery complex from the river see the Outside the Wet Dock page.

Lastly – and at some distance – the weather vane on the highest tower was noticed and the long range photograph below reveals, at last, some lettering! The enhanced view to the right has been reversed to make the date on the vane readable: 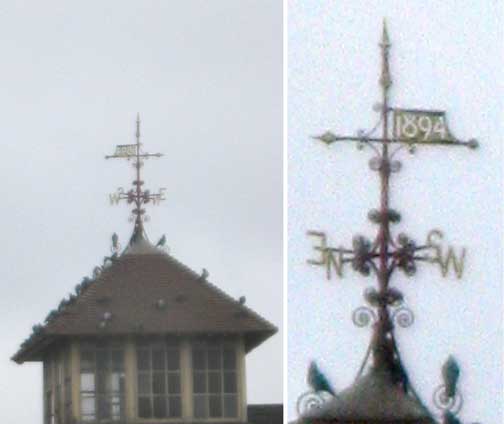 2013 images
The brewery was merged in 2002 with Ridley's and closed for good. The buildings are Listed Grade II and remain, gently decaying, more or less unchanged since 2002. The proximity of the Vopak terminal (oil and chemicals) was always a barrier to development of the brewery site until its closure in 2010. The Tolly Cobbold brewery is a remarkable set of buidings in search of a new role in a prime site overlooking the River Orwell. The latest news in March 2013 is for the whole complex to be refurbished and extended for an hotel, apartments, a heritage centre (probably the excellent Ipswich Transport Museum and possibly a revived Gippeswyc Centre holding the town's extraordinary archives),  a supermarket, possibly a new music venue. It's a huge development along the quayside, so let's hope it turns the old brewery buildings into something useful and attractive. 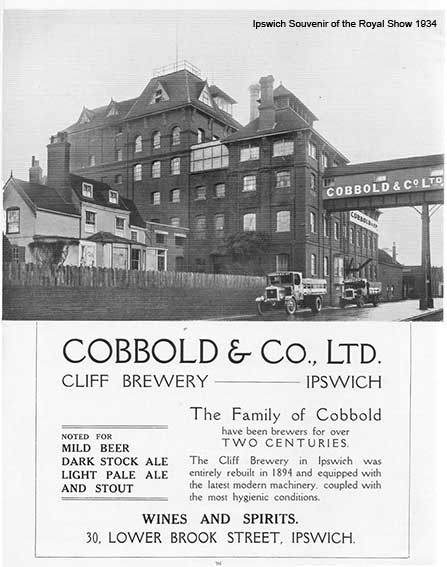 Above: the Brewery (with 'The Cliff', the Brewery Tap pub, in the foreground) in 1934 showing that it had liveried lorries and a ship loading gantry similar to that on the R & W Paul silo on St Peters Wharf shown on our Trinity House Buoy page. 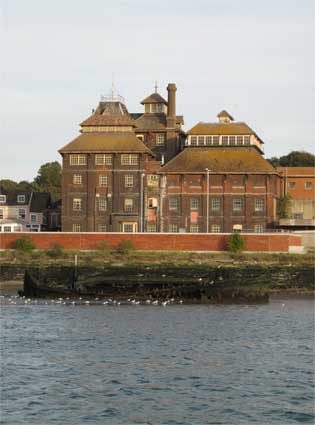 ... complete with rotting barge in foreground (2012 image)
And below, a companion image from The Ipswich Society's Flickr collection (see Links) of the same view in the 1960s when the company proudly proclaimed its identity: 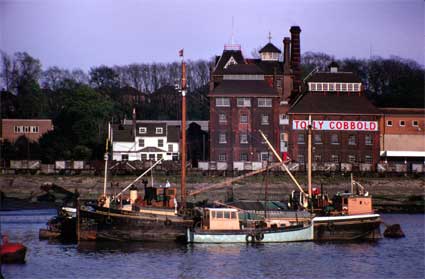 And finally, a piece of Tolly lettering you don't normally see. Spotted at The Wheatsheaf – formerly the offices of wine importers and off-licence outlet, Barwell & Jones – in Fore Street. 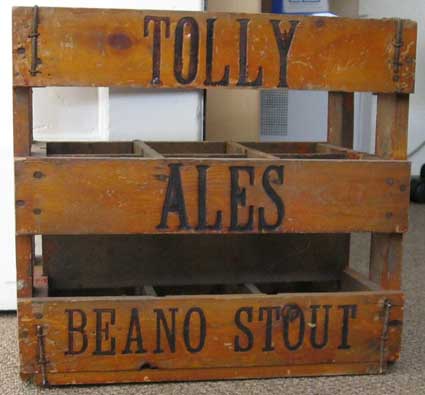 From an era when well-made and well-lettered timber crates were reused many times for delivery of full and removal of deposit (re-usable) bottles to public houses, hotels and off licences, these artifacts can fetch up to £70 on the nostalgia collectors' market, apparently.

[UPDATE 22.7.2018:  'My Grandfather, Hugh Emerton Airey, was manager at the Cliff Brewery and when he left in 1932 he was presented by the staff with a silver ink stand which I still have. I have tried to photograph it, see attached. 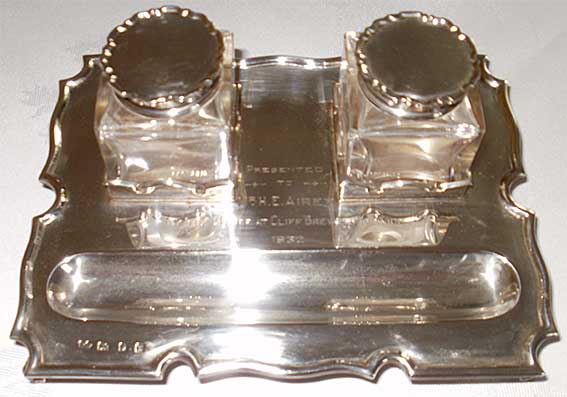 Thought you may be interested to see it. Yours, Anthony Airey. Many thanks to Anthony for sending this example of Cobbold brewery memorabilia.]

See our Links page for the Tolly Brewery History website.
See also our Pubs & off-licences page for more traces of Tolly Cobbold in our town and elsewhere.
For much, much more on the Cobbold family tree and its remarkable characters see The Cobbold Family History Trust website (Links).
See also our Lettered castings index page.