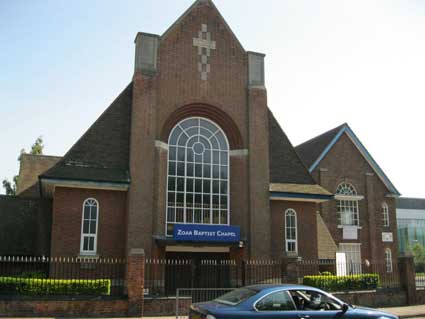 appears in stylish, raised capitals high up on the lofty gable of the front elevation. 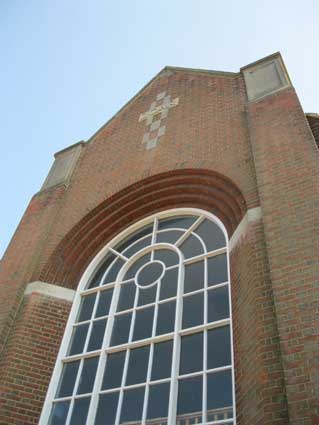 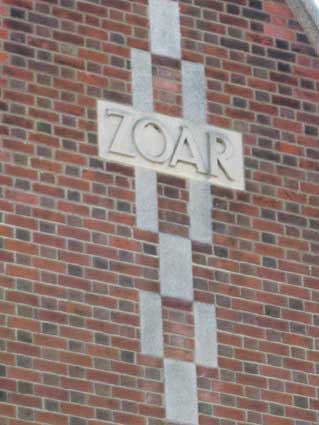 This religion is named after the biblical city of Zoar, now rendered 'Zoara'. In Hebrew 'Zoar' means 'little' or 'insignificant'. It was one of the five (Pentapolis) cities of the plain of Jordan in the book of Genesis in the Old Testament, which escaped the "brimstone and fire" which destroyed Sodom and Gomorrah, as Zoar had sheltered Lot and his daughters.

Zoar was originally a Strict Baptist place of worship founded in the hamlet of Lower Dicker in East Sussex in 1837. The David Street chapel in Ipswich followed speedily, opening in 1842. Today there appear to be many such Baptist Chapels throughout the country split into factions and variants: 'Zoar', 'Bethel', 'Ebenezer', 'Hope', 'Providence', 'Zion', 'Salem' (see our Salem Chapel page) etc.

The Borough's local list tells us:
"Zoar Baptist Church, St Helens Street. (1925). Church group at the junction of St Helens Street and Rope Walk. Gable roofed church with transepts and smaller gabled church hall set back and to one side. Red brick, blue headers, stone dressings, clay roof tiles. The main (north) church elevation facing St Helens Street is emphasised by a tall central bay set between buttresses with heavy stone finials, which project beyond the slope of the roof. The double leaf entrance door at its base has a flat canopy; above, a tall round-headed window with thin glazing bars, set within a brick arched recess which is expressed as multiple brick orders under the arch. Plain stone imposts. In the gable, a stone tablet carved with the word ‘Zoar’ in raised lettering, set within a chequer pattern of plain stone tablets. In the walls to either side of the central bay, narrow round headed window openings. The roof slope descends either side of the central bay, wrapping round the frontage as tile hanging above a shallow tiled canopy. Single storey flat roofed structure wraps the south end of the church. Gabled brick entrance porches on the west and east sides, round headed arches over the door. The hall elevation has flat brick buttresses framing a central window group; rectangular with thin glazing bars at ground floor level; at first floor level a similar window with a round headed window above a projecting lintel. Narrow round headed windows to either side. Brick pier and metal railing wall surrounds the site, the piers capped with stone."

Foundation stones
These can be found on each side of the central door fronting onto St Helens Street. 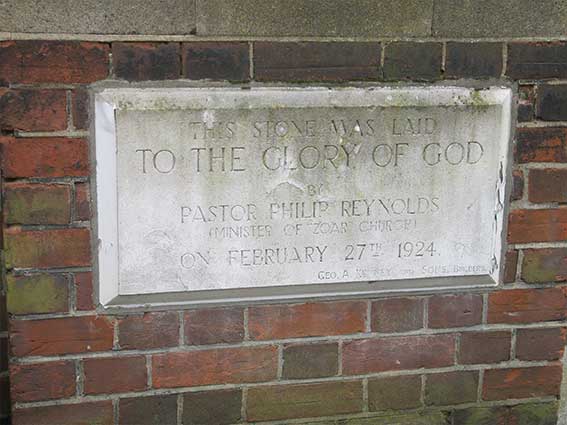 'THIS STONE WAS LAID
TO THE GLORY OF GOD
BY
PASTOR PHILIP REYNOLDS
(MINISTER OF "ZOAR" CHURCH)
ON FEBRUARY 27TH 1924.
GEO. A. KENNEY AND SONS, BUILDERS.' 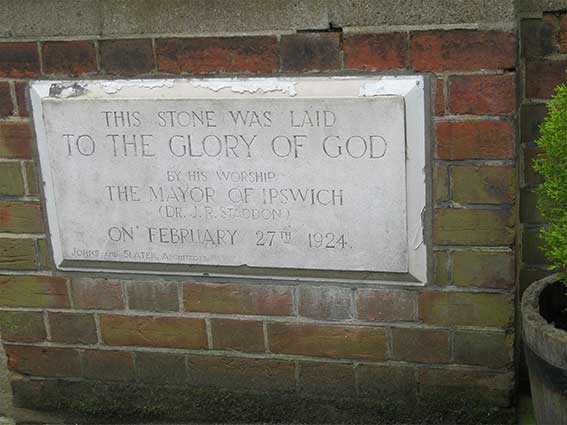 'THIS STONE WAS LAID
TO THE GLORY OF GOD
BY HIS WORSHIP
THE MAYOR OF IPSWICH
(DR. J.R. STADDON)
ON FEBRUARY 27TH 1924.
JOHNS AND SLATER. ARCHITECTS.'

Both plaques have had their bevelled edges painted with masonry paint, now peeling off.

Johns & Slater were one practice of a number of good architects working in Ipswich and left their mark on several sites in the town. They designed the Social Settlement in Fore Street (demolished in 1961), The People's Hall in Stoke Street the Fraser's store in Princes Street/Museum Street and the original Civic College (later 'Suffolk College') when as Johns Slater Haward, the main design came from the pen of local architect Birkin Haward. Sadly, flaws in the reinforced concrete manufacture resulted in demolition in 2006, the buildings replaced by Suffolk New College on Rope Walk.

[UPDATE 22.9.2021: ‘I was born and lived in Jefferies Road from 1941 and attended Zoar for many years. The article is informative about the chapel itself but fails to mention the building next to it. In 1941 this didn't exist but instead there was a single story building made of wood and elevated on brick columns. I'm not sure when this was replaced by the current building, but probably late 40s early 50s. The date will be on the foundation stone presumably.
'The new two-story building was designed as a function space (weddings etc.) and a Sunday school. I don't know the name of the architect, but he/she obviously tried to mimic the outside design of the chapel itself as viewed from St Helens Street and made a pretty poor job of it in my view.
'Re: the brick piles of the original Sunday School, a friend who has lived in Jefferies Road his whole life suggested that they were there because the area flooded fairly regularly at one time. I do remember St Helens Street flooding when I was a child, but I've always thought that this was just a memory of the great storm of 1953. However, there were also floods in 1939 apparently and perhaps at other times also. Regards, Gordon Edwards’ Many thanks to Gordon for this additional information. For a 1911 postcard of a flood in St Helens Street see our H.W. Turner page.]