'The Friends of Holywells and Landseer Parks
in memory of
Sqn Ldr Anthony Roscoe Towne Beddow DFG,
247 Squadron RAF,
who lost his life on June 29th 1949, aged 27 years,
in an air crash close to this place while leading
his squadron on 'Exercise Foil'.
'His gallantry saved the lives of his fellow countrymen'


This small cast iron memorial can be found to the left of the Myrtle Road entrance to Holywells Park (see below). A small reminder of life and death in the air after the Second World War.

Here is Alan Capon's reminsences from http://www.countyweeklynews.ca (a curious Californian website which seems also to feature East Anglia) dated Thursday, November 19, 2009:
"Sixty years ago, late in the afternoon of June 29, 1949, I had just entered the main gates of Holywells Park in my hometown of Ipswich when I heard a very loud noise. Looking into the park I saw an aircraft strike the roof of a semi-detached house on Myrtle Road then crash through the wall of the park into some tall trees.
As I walked further into the park I could see smoke and flames flare up high into the trees. The remains of the pilot had been thrown some distance from his aircraft.
The fallen aircraft was an RAF De Havilland Vampire, a single-engine jet fighter with a distinctive twin boom configuration. I learned many years later that the aircraft, at the time, had been engaged in a simulated dogfight with an RAF De Havilland Hornet aircraft.
I left the park and returned home and I did not learn anything more about this tragic event until, 51 years later, I read on the Ipswich Evening Star web page of the dedication of a plaque honouring the 27-year old pilot, Squadron Leader Anthony Roscoe Towne Beddow who had fought to steer his disabled plane into the park to avoid crashing into the houses below.
The plaque fixed to the wall of Holywells Park remembers Sqn. Ldr. Beddow and also a 13-year old girl, Pamela Cooke, who was in Myrtle Road when the aircraft struck the roof of a house two doors from her home. She suffered burns from the spilled fuel and died from her injuries five days later.
The pilot's twin sons, Barry and Matthew, were just two months old when their father died. They were present at the unveiling of the memorial plaque in 2003.
I revisited the site of the crash in Holywells Park while on holiday in England in October, 2003 and read the poignant words on the memorial plaque.
Looking back over the years on this tragic event it seems to me, today, that a high-speed, low-level flight and simulated dog-fight by two military aircraft directly over a town should never have been authorized.
In 2008, David Kindred, the now retired photo editor of the Evening Star, recently came across a copy of the local police report on the incident. The report, Kindred said, shows how very basic the investigation into the crash was. Today, Kindred said, the site of an air crash would be closed for days while every possible detail was recorded.
Myrtle Road is a short street but this was the second time a major tragedy had occurred there. On June 2, 1943, during the Second World War, 11 people were killed in an air raid on town. One bomb landed on houses in Myrtle Road killing Mr. and Mrs. Smith at number 44, a few yards from where the Vampire later crashed.
During this Second World War bombing raid a German aircraft flew through the blast of the bomb causing it to crash into a crane at the Ipswich docks.
These memories of past days during and immediately after the war flooded back to me at this year's Remembrance Service in Picton." 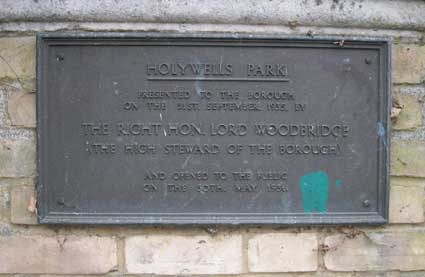 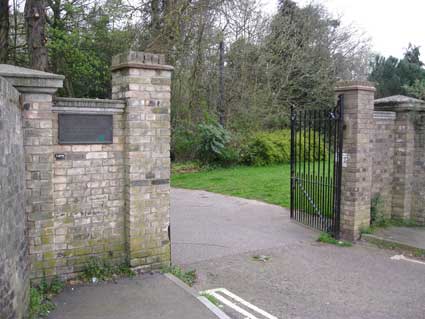 'HOLYWELLS PARK PRESENTED TO THE BOROUGH
ON THE 21ST. SEPTEMBER, 1935, BY
THE RIGHT HON. LORD WOODBRIDGE
(THE HIGH STEWARD OF THE BOROUGH)
AND OPENED TO THE PUBLIC
ON THE 30TH. MAY, 1936.'

Churchman was elected Mayor of Ipswich in 1901, a post he held until the following year (his brother William had been mayor between 1899 and 1900). He was a lieutenant-colonel in the Essex and Suffolk Royal Garrison Artillery between 1905 and 1909 and commanded a Territorial Force Battalion of the Suffolk Regiment as a temporary lieutenant-colonel in the First World War. In 1917 he was created a baronet, of Abbey Oaks in the Parish of Sproughton in the County of Suffolk. In 1920 he was returned to Parliament for Woodbridge, which he remained until 1929. He was appointed a Deputy Lieutenant of Suffolk in 1930 and served as High Sheriff of the county in 1931. In 1932 he was raised to the peerage as Baron Woodbridge, of Ipswich in the County of Suffolk. Between 1932 and 1949 he was High Steward of Ipswich. See also Chantry Park for another example of Churchman's philanthropy.

Early written records indicate that the land at Holywells was part of the Manor at Bishops Wyke which was held by the Bishops of Norwich in the 13th century (see Wykes Bishop Street for more on this). During Henry VIII's reign the Manor was returned to the crown and then granted to Sir John Jermy, and then passed hands many times before John Cobbold secured the title in 1812. The Cobbold family had been using the land since1689 to make beer; initially they used the water from the natural springs and shipped it to Harwich where their brewery was located. Eventually they moved the brewery to the water source. The last Cobbold owner of the park was John Dupuis Cobbold (1861-1929). When he died in 1929 Holywells was sold to Lord Woodbridge who subsequently gave it to the Borough of Ipswich. Although the park was opened to the public in 1936, sadly the house was demolished in 1962 except for the stable block and the conservatory which are Listed Grade II and finally restored in 2014.

See also our Lettered castings index page.
See our Plough Street page for more on the Myrtle Inn, which gave the road its name.