'We have found one of these house names on our house (12 Belvedere Road). It has been long hidden with ivy. But it's hard to make out. Can you help? From Mrs Harper.' This enquiry from February 2014 prompted a visit to Belvedere Road. We recall this name plaque from the eighties when the attractive row of cottages opposite Bristo's petrol station were refurbished and modernised. Of course, at that time the Victorian Albion Mills public house stood on the corner, well-known for music gigs in the small cellar. Although closed and demolished in 1995 to make way for more Bristo's car display space, the bus stop is still called 'Albion Mills' to commemorate the windmills which stood here on the top of Albion Hill. One of them stood off the site of the present day Belle Vue Road: Post Mill Close. After the mill was demolished this strip of land beside the Westerfield-Felixstowe railway cutting (opened 1877) was allotments and, since the late 1970s blocks of flats. The weather-boarded Mill Cottage is still standing at number 123 Belle Vue Road.
[*For some time we were misreading this worn plaque as 'Parade Road Terrace'; a classic case of reading what one expects to find, rather than looking long and hard. Thanks to the work of Hilary Platts on the California estate, the mistake was corrected in 2014.] 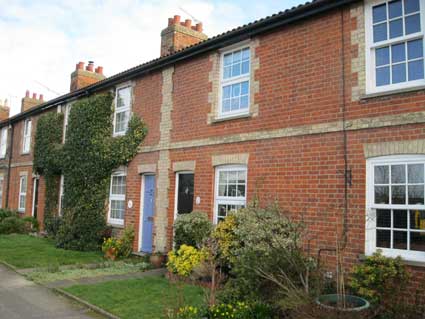 The name plaque is at first storey level in the Suffolk white brick feature between numbers 10 and 12 Belvedere Road. Despite the ivy tendrils and weathering, the lettering should be clearer if viewed in raking sunlight (or streetlight). 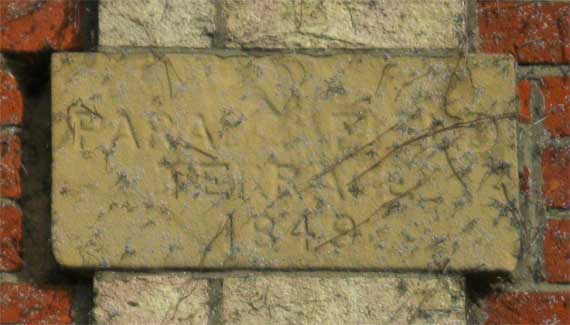 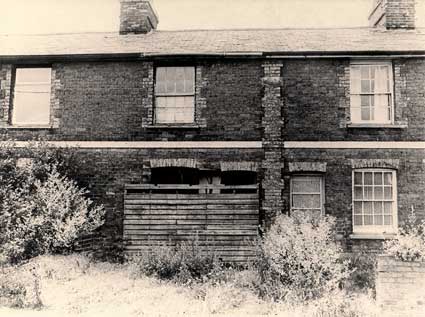 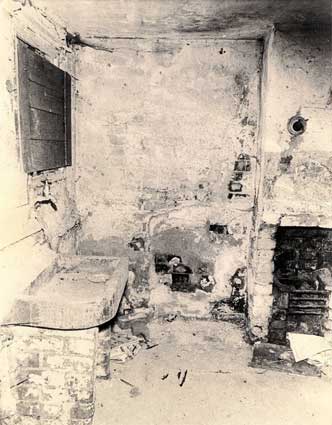 Mrs Harper sends these remarkable photographs of Parade Field Terrace in the 1980s before modernisation, although they resemble images from a hundred years before. Above left: the frontage of 10-12 with the name plaque between the upstairs windows, in the pale brick, perpendicular feature. Above right: the interior with an old scullery sink and fireplace. Below: the back yards, apparently after partial demolition of upstairs box-rooms, rear wash-houses and outside toilets. The cast iron mangle and galavanised container are a reminder of a previous generation. 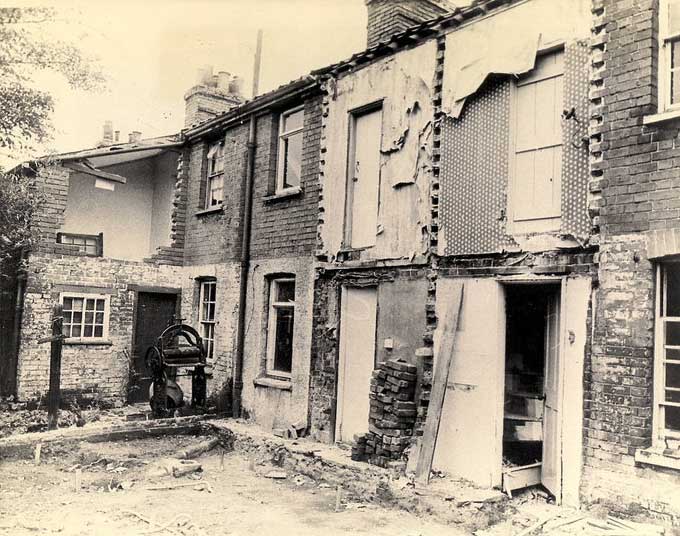 The Albion Mills public house
Parade Field Terrace abutted the outhouses and car park of The Albion Mills public house on the corner of Albion Hill (Woodbridge Road). Demolished in 1995, the pub bore a sign showing Cranfields Flour Mill on the Wet Dock rather than the windmills which benefitted from the stiff sou'westerlies which funnelled up the Gipping valley. The photograph is from The Ipswich Society's Image Archive (see Links). 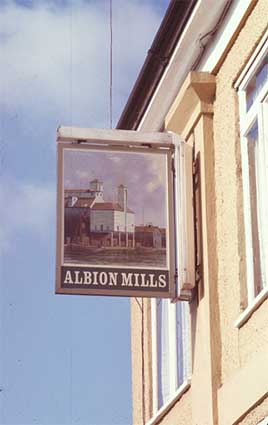 Photograph courtesy The Ipswich Society
The map detail from 1902 shows the railway cutting and Woodbridge Road bridge over it. Interestingly, the small building on the corner of Belvedere Road is marked as 'PH' (public house), rather than the Albion Mills which stood on the opposite corner, probably from the 1860s. Over the years this has been a The Robin Hood & Little John public house (and it must have been little), a greengrocer's, a florist ('Belvedere and Orchidia', no less) and a 'therapy' place. It has had a french polisher and hair salon behind it on Belvedere Road. In 1902 there are open fields to the north, presumably belonging to Belvedere Farm – the farmhouse is still there at no. 63 (see below) – and it is interesting to see how they had to engineer the curve of the Felixstowe line (opened 1877) railway cutting to just miss the corner of the property. Since the building of the extensive Bramley Hill housing development in 1995, accomodation buildings have been constructed up the bank from Braeburn Close and very close to the railway line on the other side of the cutting.
See our Sunny Place page for a close-up of part of the 1902 map showing the label 'Back of Albion Mills' across the road from Parade Field Terrace: a narrow lane leading to industrial buildings. Although the sites of the windmills are not shown in 1902, they are certainly there on Edward White's map of 1867.
See also the Suffolk Mills Group document on Windmills in the Borough of Ipswich (click to open the PDF).

Belvedere: Italian for 'fair view';  'an architectural structure sited to take advantage of a fine or scenic view', because of the views over the town from this high point on Albion Hill; see also Belle Vue Road nearby. It is interesting that on the map below a house or smallholding halfway up Sidegate Lane is labelled 'Belvedere'. This house still stands today on the cul-de-sac leading round to the Sidegate Lane Neighbourhood Group Community Centre. Is it this which gives Belvedere Road its name – but surely there is no scenic view from this vantage point? 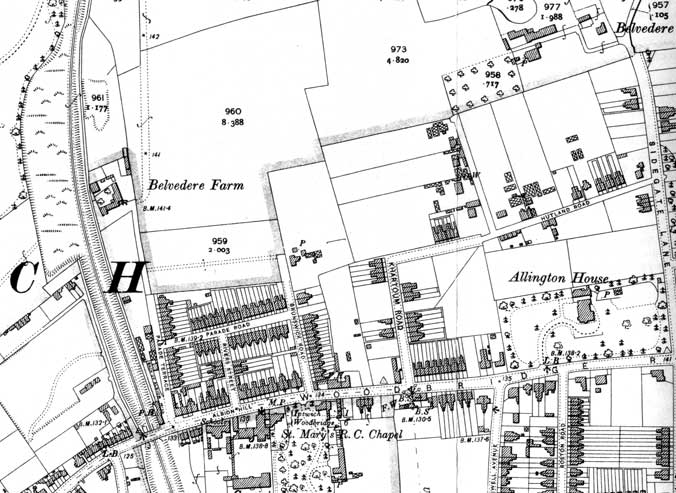 1902 map
It is interesting to note that 'Parade Field Terrace' is not the terrace in Parade Road, but in 'Parade Terrace' (renamed Belvedere Road, after the farm). This points to the fact that the parade ground used by the militia was on the site of, or very close to, Parade Road.
See also our Cavendish Street page for a large map detail from 1867 of the startling (and perhaps optimistic)  'Proposed' extension to St Helens Road (today's southern section of Rosehill Road) stretching all the way to join Parade Terrace and extend round to the old cemetery. 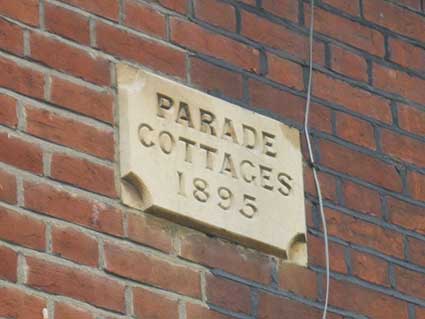 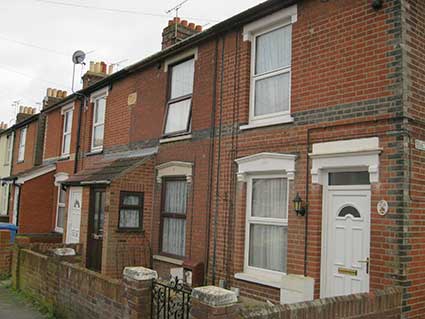 2016 images
There is a handful of house name plaques in Parade Road, including on the north side, 'Jubilee Cottages 1897' and 'Victoria Cottages 1897' (the year of Queen Victoria's Diamond Jubilee marking 60 years of her reign). On the south side is:

See our Brunswick Road Post Office page for the 1930s houses and shops which were part of the eventual extension north of Brunswick Road. 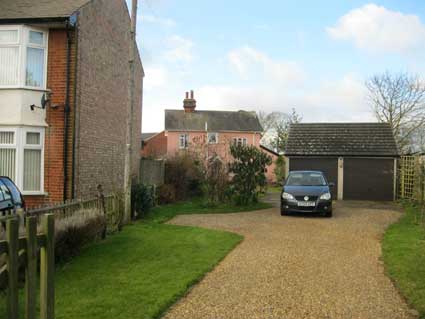 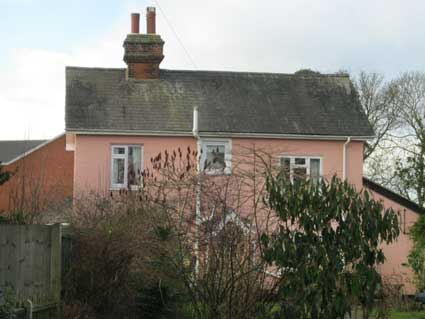 2015 images
Above: Belvedere Farmhouse in 2015 as seen from its Belvedere Road entrance. As far as we know, the remaining farmhouse building is not lettered in any way: from the road it is merely number 63. However, it is interesting to see this survivor of a series of developments and modernisation. One can try to imagine the occupants here pre-Belvedere Road, pre-Corporation Cemetery (opened 1855), pre-railway (opened 1877) cutting behind it, with sheep grazing across the meadows of Albion Hill and a clear view of the panorama of Ipswich laid out below.

Militia barracks
Militia: a military force that is raised from the civil population to supplement a regular army in an emergency. That emergency was the threat to the nation posed by Napoleon.
The short roads of terraced houses apart from Parade Terrace (which became the first part of Belvedere Road once it was extended to meet Tuddenham Road) were Parade Road, Rivers Street and Brunswick Road – again only the first few yards of the last of these. This explains the kink and widening which occurs in Brunswick Road which is noticeable today: a thirties development with its front gardens as an extension of (on the east side) a tightly-packed Victorian road. The road names: Albion Hill ('Albion': an ancient poetic name for Britain), Parade Terrace, Parade Road, Khartoum Road and Hutland Road indicate that this was the site of the militia barracks.
The Old Blue Posts
Opposite the jaws of the Khartoum Road at 284 Woodbridge Road was the Old Blue Posts tavern (closed c.1828), now converted to a pair of 'half-timbered' cottages. It is not certain when this hostelry started, but it may have closed as early as 1828. One can imagine the brisk trade in alcoholic refreshment from the militiamen barracked in the huts nearby. Painted onto the edge of the brickwork of The Old Blue Posts is a St Helen's Parish boundary marker (also shown in our Boundary markers gallery). The repointing of the brickwork makes it somewhat less readable: 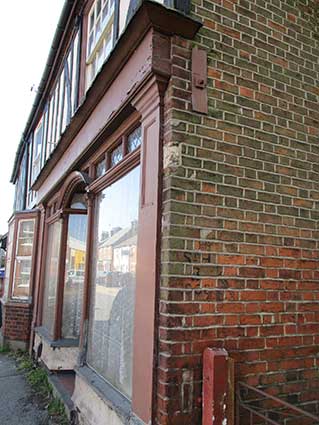 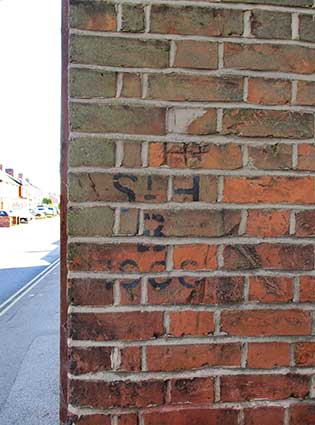 St Helen's Barracks
Around the time of the Napoleonic Wars (1803-1815), there were two other less permanent barracks in the town (other than the Artillery Barracks off Barrack Corner, St Matthews Street/Norwich Road and the Militia Barracks on Anglesea Road).  One was Stoke Bridge Maltings, situated by the river, which were converted for the purpose. The buildings later reverted to maltings. There is no visible evidence today of this second site: a wooden hutted camp known as St Helen’s Barracks that was situated at the top of Albion Hill,  on either side of Rushmere Lane (later  named Woodbridge Road) in the vicinity of Parade Field Terrace. Two thousand workmen are said to have been employed in the erection of the huts at a suggested cost of £200,000; the huts could house some 8,000 men. So this would have been a huge temporary barracks.

Harmony Square (the site of today's Hanover Court sheltered housing) between Woodbridge Road and Lacey Street was built to house officers from the St Helen's militia barracks. Two rows of single bedroom cottages faced each other across an open courtyard: eleven on one side and nine on the other with a wedge-shaped Mission Room at the eastern end. They were finally demolished in 1957.

"An ill-fated expedition to the island of Walcheren in 1809 saw the hutted camp become a military hospital for some of the thousands of troops who contracted 'Walcheren Fever'. When the first batch of ninety-two patients reached Ipswich on 10 September, four of them were dead on arrival. By the end of the year, over 600 men had been sent to Ipswich, and mortality was high, though J.B. Davies, who was posted to the camp as a temporary physician, wrote that 'every patient had a separate bed with comfortable bedclothes, and the attendance was entirely adequate'.
The burial register at St Margaret's Church shows that 218 men died between September 1809 and February 1810. Possibly that was not the full number, because some parts of the camp were in a detached part of St Stephen's parish. The camp closed about 1813, when materials salvaged from demolished buildings were for sale 'in the centre of St Helen's Barracks'. However, some at least of the huts remained for several years, occupied by squatters – who proved a burden on the parishes in which they were living, according to [G.R.] Clarke."
Malster, R. – Ipswich: A to Z of local history (see Reading list)

[UPDATE 13.10.2015: "FOXBORO COTTAGE. Built at the end of the Napoleonic Wars out of materials from the former barracks on the Woodbridge Road in Ipswich, Foxboro Cottage has a varied and interesting past.1 In its 200 year history it has seen many changes the best known of which is undoubtedly its use as a school which ran from around 1866 until its closure some ten years later.  As with Glenham at the bottom of Hill Farm Road and the former Barrack Cottages in the south- east corner of Archway Field, Foxboro Cottage was built in or around 1815 from materials salvaged from St Helen’s Barracks on the Woodbridge Road [our emphasis]. But, while it is known that Arthur Biddell, the tenant farmer who lived at Hill House, put up the two cottages at the bottom of the hill for occupation by his own labourers and that the Barrack Cottages were built by a speculator following the sale of a building plot, there is uncertainty as to whether it was Biddell or his landlord the Earl of Bristol who was responsible for the building of Foxboro." Taken from the Playford Village website, see Links.]
You can see a photograph of Foxboro Cottage on the Geograph website.