Mike O'Donovan, our parks correspondent, has sent in images of Chantry Park gates taken in spring 2011. (The area of interest for us is the pilaster nearest the lodge and its plaque.) 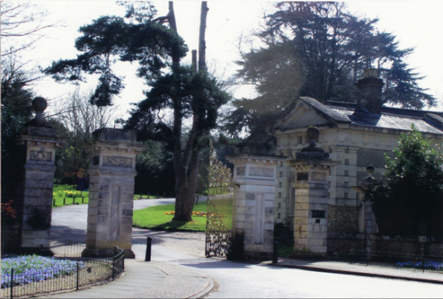 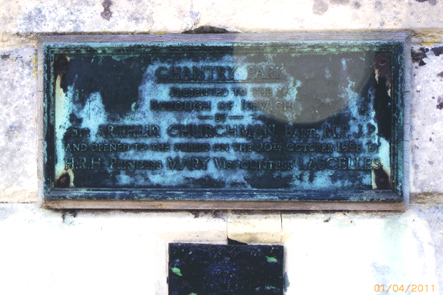 'They show the Hadleigh Road entrance to Chantry Park. Sadly the plate is weather worn (see below). The inscription reads as follows...'

'CHANTRY PARK
PRESENTED TO THE
BOROUGH OF IPSWICH
------BY-----
SIR ARTHUR CHURCHMAN BART., M.P. J.P.
AND OPENED TO THE PUBLIC ON THE 20TH OCTOBER 1928, BY
H.R.H. PRINCESS MARY VISCOUNTESS LASCELLES'

The Listing (Grade II) description reads:
"Gate House and entrance gate piers to Chantry Park. A monumental white brick and stone lodge designed as a small temple in a free classical style. Possibly of the same date as the alterations to the Chantry in the mid C19. It has paired banded corner pilasters, a triglyph frieze and a pediment on the front. A central 8-panel door with small side windows has a pediment on console brackets. Above the doorway there is a range of windows separated by inverted consoles. The side elevation has 2 windows with rusticated surrounds and voussoired heads.
The gateway to the park sets back from the road with a low brick wall on either side which sweeps in concave curves with a stone coping and wrought iron railings between consoles. Heavy wrought iron gates of mid C19 have 4 square stone rusticated piers with cornices and ornamented friezes. The centre, larger, piers have faces carved on the front and the outer piers have ball finials."

The gates
Here are more images from May 2014.
The locks on the park gates (somewhat damaged) is lettered:

with the gate house glimpsed in the background. 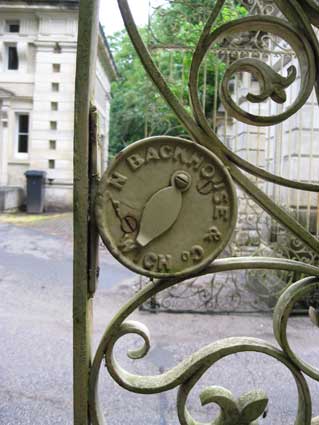 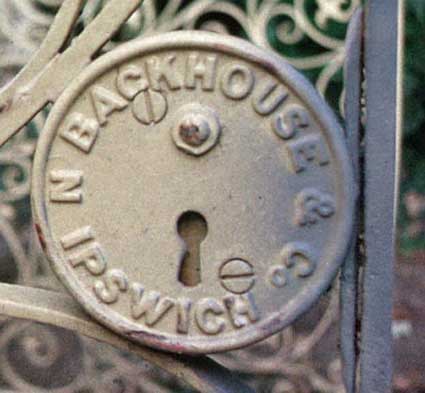 2014 images
“The origin of The Chantry (now a nursing home) is a chantry to St Thomas Becket at St Lawrence’s Church [in the town centre], founded in 1514-15 by Edmund Daundy, Thomas Wolsey’s uncle and one of Ipswich’s wealthiest merchants [see also our Lady Lane page]. The chantry was endowed with 100 acres (40 ha.) of land on the edge of Ipswich. By 1668 the property was owned by Sir Peyton Ventris, who died in 1691, and his son Edmund is supposed to have rebuilt the house c. 1700. Little is known about the old house, but it was taxed on sixteen hearths in 1674. After Ventris’s death in 1740 improvements were made by the new owner, Sir John Barker, and again from 1772 by Metcalfe Russell, who added the top floor. So one has a stuccoed house of five bays and two and a half storeys, with a three-bay pediment on the N (entrance) front. On rainwater heads the date 1772. To this, in 1853-4, wings of one bay, a porte cochere of two storeys and a three-bay two-storey bow at the back were added for Sir Fitzroy Kelly, all in a debased classical or free Renaissance style. The bands of vermiculated rustication are particularly telling. Equally telling the Entrance Gates in Hadleigh Road, and the little white-brick and stone Lodge, looking like a very grand classical mausoleum. The architect for all this work seems to have been R.M. Phipson, and perhaps he was responsible for the interior also.” [Bettley/Pevsner, see Reading List] 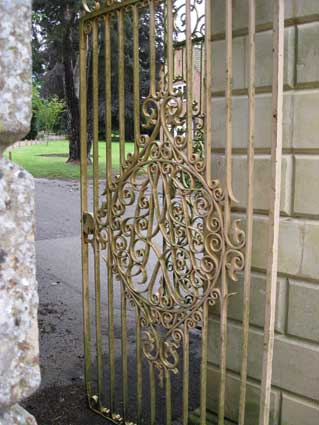 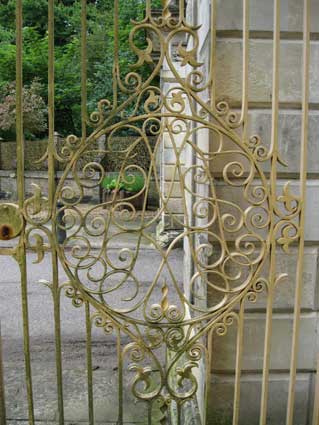 Question: is this motif in the centre of the pedestrian side gates a monogramme?  Or just a symmetrical rococco pattern? The most obvious initials would be those of Arthur Churchman ('AC'), but they don't seem to fit. These rather fine, wrought iron gates boast dense patterns of curlicues, particularly on the side panels. 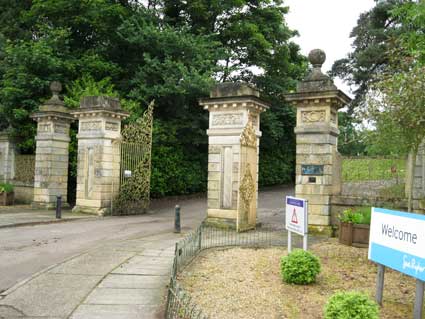 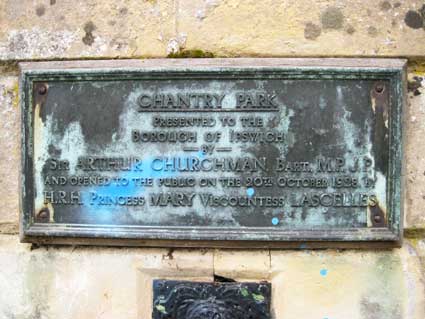 The last 2014 photograph shows a clearer image of the metal plate on the right hand pier, showing the inscription more clearly despite the statutory smear of vandal's spray-paint.

Sir Arthur Churchman
In 1927 the land where Chantry Park is now situated had been sold for housing development and was then purchased by Sir Arthur Churchman (later Lord Woodbridge) who gave it to Ipswich Corporation to be held in permanent trust for the people of Ipswich. Baron Woodbridge, of Ipswich in the County of Suffolk, was a title in the Peerage of the United Kingdom. It was created on 17 June 1932 for Sir Arthur Churchman, Conservative Member of Parliament for Woodbridge from 1920 to 1929. The title became extinct on his death on 3 February 1949. Sir William Churchman, 1st Baronet, was the elder brother of Lord Woodbridge. Incidentally, his philanthropic deeds did not stop at Chantry Park. Sir Arthur Churchman bought Orford Castle in 1928, and in 1930 gave the property to the Orford Town Trust; an appeal for money to maintain and restore it began shortly afterwards. Colonel Sir William Alfred Churchman, 1st Baronet VD (1863 – 25 November 1947) was an English tobacco manufacturer and public servant. Churchman was born in Ipswich, Suffolk. He went into partnership with his brother, Arthur, in the family tobacco firm which had been founded by their great-grandfather in 1790. This was renamed W. A. & A. C. Churchman. It was later absorbed by the tobacco combines and Churchman became a director of the Imperial Tobacco Company. Some may recall the Churchman's factory in Portman Road and  their product: Churchman's No. 1 cigarettes. 1950s advertisements showed, variously, glamourous women and (disturbingly) a horse and a poodle smoking the product.

2014 image
This enamelled metal shop sign was spotted at an open day in May 2014 at the Church of St Michael, Upper Orwell Street (burnt down in 2011). It is a reminder of a locally-marketed brand of tobacco from the Churchman's factory at the top end of Portman Road. It reads:

Here is an exhibition example of a similar sign: 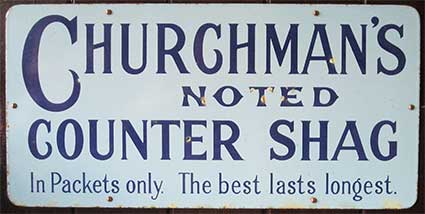 The curious curlicued initial 'C' is simplified, making the brand name more readable. 'In Packets Only' is now accompanied by 'The best lasts longest'. In the modern times of tobacco advertising bans and an awareness and recognition of the deleterious effects of smoking on human health, these advertisements ring rather hollow. With the benefit of hindsight, the immense wealth accrued by the Churchman family was based on very dubious aspects of human activity: slavery on tobacco plantations, the pedalling of addictive drugs to young people and women and so on. 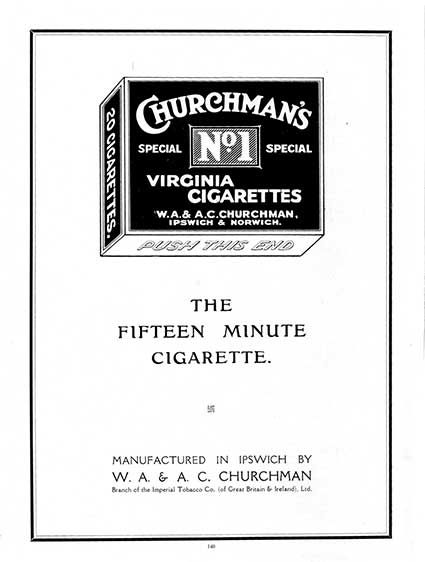 1932 advertisement
Apart from the words 'PUSH THIS END' on the base of the cigarette pack, perhaps the oddest thing is the inclusion of a small swastika* between the words 'Cigarette' and 'Manufactured'.
[*The swastika is a geometrical figure and an ancient religious icon in the cultures of Eurasia, used as a symbol of divinity and spirituality in Indian religions. In the Western world, it was a symbol of auspiciousness and good luck until the 1930s, when it became a feature of Nazi symbolism as an emblem of Aryan identity and, as a result, it was stigmatized by its association with ideas of racism and antisemitism.
The name swastika comes from Sanskrit meaning 'conducive to well being' or 'auspicious'. In Hinduism, the symbol with arms pointing clockwise is called swastika, symbolizing surya (sun), prosperity and good luck, while the counterclockwise symbol is called sauvastika, symbolizing night or tantric aspects of Kali.]

The following is from the English Heritage Register of Parks and Gardens of Special Historic Interest.
"The Ipswich Chantry was founded in 1509 by Edmund Daundy, a prominent and respected Ipswich merchant [he was a Member of Parliament for Ipswich in 1512 and 1515, not to mention the uncle of Cardinal Thomas Wolsey]. After the Ipswich priories were suppressed in 1536, the Cutler family were said to be in occupation of a house at the Chantry and by 1668 the land was in the ownership of Sir Peyton Ventris. Sir Peyton was succeeded in 1691 by his son Edmund who built a house in about 1700 which is believed to be the foundation of the present house (Pevsner and Radcliffe 1975). Edmund died in 1740 and the estate was sold to Sir John Barker who made substantial improvements to the house. The Chantry changed hands again in 1772, being purchased by Metcalf Russell who added a further storey and passed the land on to his elected heir Michael Collinson. From 1795 onwards Michael's son Charles enlarged the estate to 500 acres (about 208 hectares) and it is he who was responsible for developing the character of much of the registered park which survives today (1998). He planted the South Avenue (1807) and made further modifications resulting in it being described as having woodland groves, a lake covering several acres and studded with little islands (dated 1828), and gardens of rare and exotic plants laid out with meticulous care (Kelly 1844).

In 1836 the estate was purchased by Charles Lillingston who married the daughter of the Rev Fonnereau of Christchurch Mansion and on the occasion of their daughter's fifteenth birthday the local paper carried a lengthy description of the park where the celebrations were held. Lillingston was attributed by White's Directory of 1844 as having made many improvements to the house and grounds. His son and heir however was killed in action, resulting in another sale in 1852 when Sir Fitzroy Kelly, a distinguished barrister and MP for Ipswich, became the new owner. Kelly is also said to have applied great energy to his new property, making many alterations to the house in the Italian style (White 1844). He commissioned the new gates and lodge at the north entrance and called in Mr Nesfield (assumed to be W A Nesfield (1793-1881) to provide a scheme for the flower gardens on the south front (Inspector's report). His stay was also short though, and he sold the site to Charles Binney Skinner in 1867. By 1897 the house and park had been sold again to Sir Henry Cecil Domville. The Domvilles lived lavishly in the Edwardian style but Sir Cecil died suddenly in 1902 and his widow went to live abroad. When the Jump family arrived in 1906 the grounds had become very neglected but Mrs Jump was a keen gardener and with the help of Mr Nottcutt of Woodbridge improved the gardens and added new features. In 1927 when the Chantry again came up for sale it was purchased by George Gooday with the intention of developing a housing estate. Sir Arthur Churchman, a JP and member of the Council intervened, however, purchasing the house and park and presenting them to the borough as a public amenity which was opened by Princess Mary in 1928. Since that time the house has been leased as a nursing home and the walled kitchen gardens are currently (1998) used as a nursery by the Borough Parks Department."

[UPDATE 3.1.2012: From Ronald Turner. "I was evaculated to (i think) Chantry hse in 1940 and i remember servants calling the owner Lord Woodbridge. It had a large lake and horses running in the fields.
I have been to suffolk several times to try and identify where it is but to no avail.
Could it possibly be Chantry Hse. ??
Yours sincerely RG.Turner"
Well, we know that Lord Woodbridge purchased the house and park in 1927 and gave it to the borough as a public amenity in the following year. It is possible that the house was used for evacuees during the 2nd World War - or another house in the estate. Can anyone help?]