It was said in the mid-19th century that parts of Ipswich had a 'Class of boys and girls who were prevented, either by their debased condition, by the worthlessness or criminality of their parents, or the tattered state of their garments, from receiving instruction from any previous school'. The pupils were reported to be unmanageable, unruly and insubordinate. Then there was no state or compulsory education; parents who could afford a private education for their children sent them to a fee-paying grammar school. Christian religions opened schools for a select few from their own parish, but most young people went without education.

The philanthropist and Quaker banker, Richard Dykes Alexander (see Blue plaques page) set up the Ipswich Ragged School in a cottage in St Clements Church Lane in 1849. See the 1881 map on our Street furniture page re: the Water Works to see it marked 'Sunday School'. The purpose-built school in Waterworks Street remains today and came under the influence of Joshua George Newman who, with his wife Deborah,  taught reading, writing, domestic skills and craft trades to up to 135 destitute children at a time over nineteen years at the school. The Boys' School is a well-known survivor of a bygone era standing on Waterworks Street, or rather it would stand in the middle of the current Waterworks Street, had the fascia not been moved back from the road and the building shortened by by about ten feet when the street was widened in 1984 as part of the Ipswich 'Eastern Gyratory' traffic scheme (which also demolished some fine old buildings and turned the most ancient part of the town around the Wet Dock into a race-track). 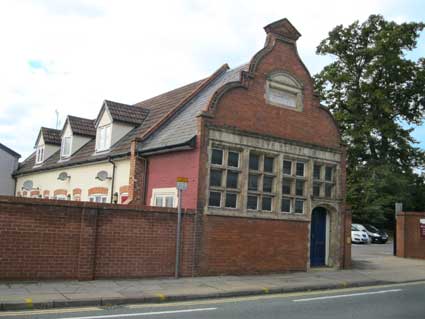 with 'BOYS SCHOOL' on the stone mullioned windows below. It has received at least a couple of facelifts since then and is now housing accomodation with accesses at the side. It was set up by the Quakers who did much philanthropic work for the poorest in society during the Industrial Revolution. 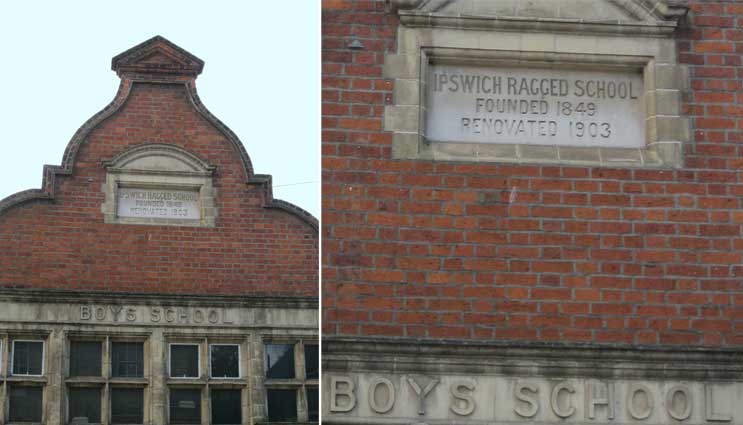 2012 image
This photograph from 1960 shows the original position of the school standing shoulder-to-shoulder with its long vanished neighbours on a much narrower Waterworks Street. 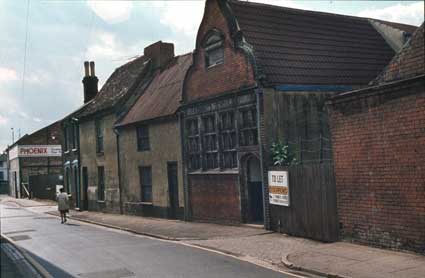 The pre-Gyratory photograph of the Ragged Boys School shown above – note how narrow the street was – reminds us of some information and images from former Ipswich Society chairman, Tony Hill, regarding the two buildings immediately south of the school shown here: 8 and 10 Waterworks Street. One of the acknowledged features of the developments and 'improvements' of the sixties and seventies in Ipswich is the almost careless destruction and loss of a number of historic structures in the drive to 'modernise' the town. (Indeed, it was the threatened cutting-through of medieval buildings in St Nicholas Street and Silent Street by a dual carriageway from the Greyfriars roundabout along Cromwell Street – now Cromwell Square – towards  Star Lane which was the genesis of The Ipswich Society and its continuing role in monitoring the old town and the planning of the future town.) 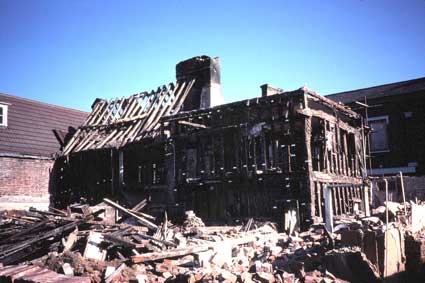 A second feature of the Ipswich 'modernisation' is a number of successes in saving buildings. Tony tells us that the building in Waterworks Street which stood below the Ragged Boys School was identified as not two, but one significant timber-framed structure which might be saved and re-erected. Perhaps surprisingly – for the early photographs show an rather unpromising aspect – the inner and outer walls were dismantled and the framework numbered (note the labels on each timber) and taken down. 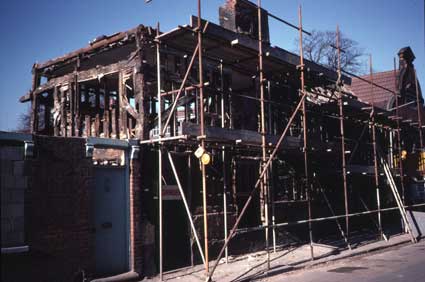 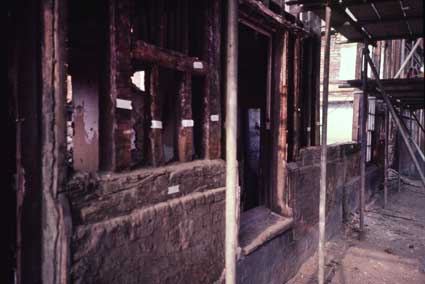 “WATERWORKS STREET
Our Buildings Recording Group’s first task in Waterworks Street turned out to be much more interesting than anyone had thought possible. At first glance it seemed that were looking at two separate buildings – totally different roof lines, odd windows and a hotchpotch of of brickwork at the back. However, during our initial investigations it soon became apparent that not only had we found a timber framed structure all of one build, but also a rather intriguing example of late 16th century design.

Although we have still to discover the original purpose of the building, we have already learned a great deal about its construction and appearance as a result of several members’ energetic assault on the plaster wall coverings with crowbars and hammers.

This first stripping-out exercise resulted in the discovery of several original window openings and allowed us to establish the basic wall formation and plan shape. At the moment we know that we have a two storied building comprising single ground and first floor rooms at each side of a central chimney. Below ground floor there are good cellars each with a fine, but seemingly unused, fireplace. It also seems clear that the building continued beyond its present junction with the Ragged School.

Perhaps the most perplexing elements of the design relate to the very high (2.75 metre) ground floor ceiling height and the way the windows are positioned high up in the front wall (we have found no evidence of windows at all on the back wall). One would imagine, perhaps, that the ground level had, at some time, been lowered but the presence of the cellars seems to below the theory.

It now seems certain that the buildings will be saved and arrangements are now being made for its dismantling and re-erection on another site. I have no doubts at all that much more information will come to light as the stripping-out proceeds.
Bill Thompson” [Article in the Ipswich Archaeology Trust newsletter 1984; see Links] 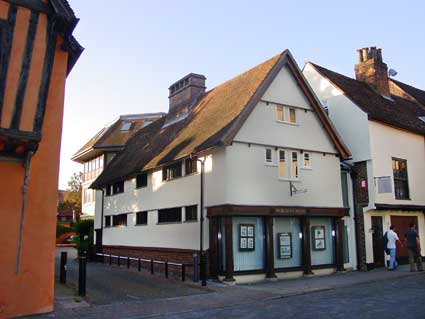 Photographs courtesy Tony Hill
Today we might pass the 16th century 'Merchant House' at 11 Silent Street without noticing it. Standing on a small plot up the road from the rake of ancient buildings which include Curson Lodge, this is the former neighbour of the Ragged School, reconstructed and with reconfigured shop front windows. The entrance has been discreetly constructed in the gap between itself and its neighbour, number 15 (there is no number 13). The modern lettering 'MERCHANT HOUSE' is probably on a fascia over the bressummer beam which forms part of the shop front. 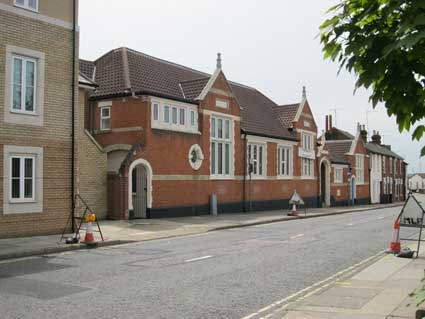 2012 images
The Ragged Girls' School stands on the opposite side to the Boys School and further up the road in Bond Street. Once used as Mick Blackwell's martial arts school, it is now a private nursery. The building dates from the early twentieth century and it displays several lettering plaques and is a more recent and impressive building than the Boys' School.
The Borough of Ipswich Local List tells us that the architects of the Ragged Girls' School (1900) were Eade and Johns. The right hand gable is an extension dated 1912. The Local List online entry continues: 'All windows are casements with white-painted surrounds, and arches over 2 entrances – one marked ‘Girls’ and the other ‘Boys’, in same style.'
It would be an obvious assumption that this building was dedicated only to the education of 'Ragged Girls' (presumably to a job in service) only, hence the horizontal stone/compound bar built in well above the main entrance (as shown in the image below). However, it seems clear that boys and girls were trained at the Ragged School in Waterworks Street. When the Ipswich School Board started in 1871 that building became Waterworks Street Infants. It appears that the continuing need for training of the very poorest children was (re)recognised and the Bond Street Ragged School was built, presumably for both sexes, However, no 'Boys' signed entrance is visible from the street, despite the statement in the Local List. 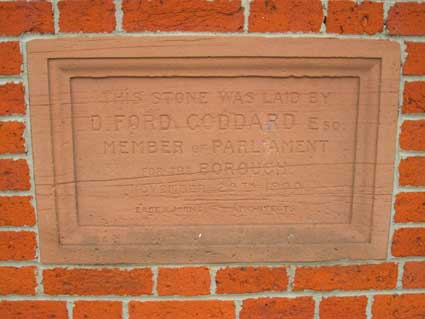 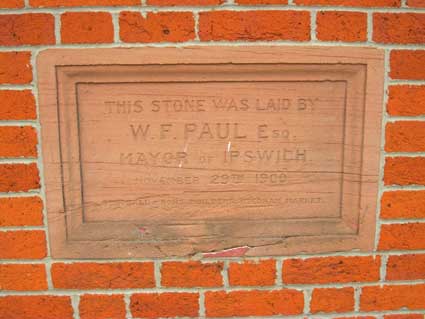 2.
[2. N.B. see our Paul's malting page for the story of the famous malting company and its importance to Ipswich.] 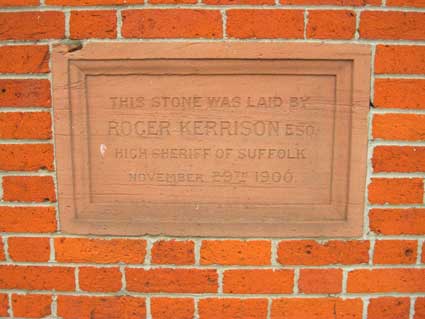 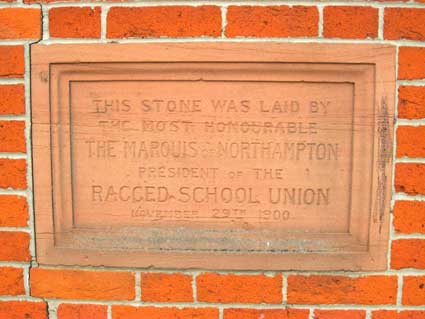 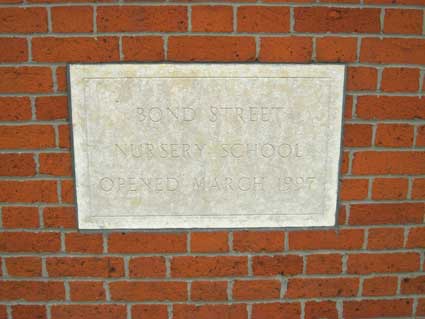 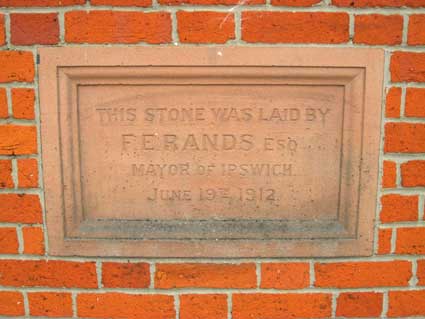 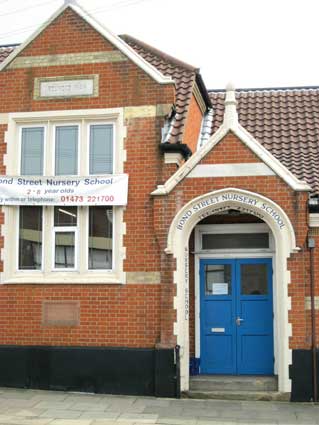 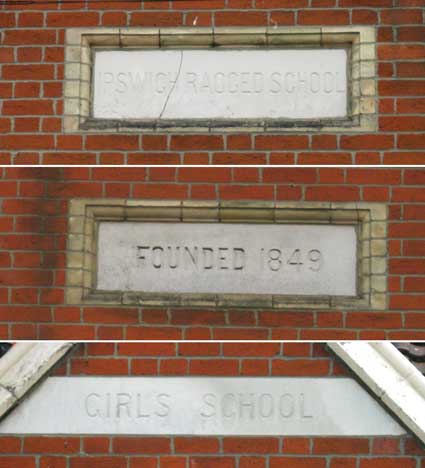 7., 8., 9.
The impressive group of dignitaries named on these tablets perhaps indicates the growing importance of 'ragged' education for the very poor in Ipswich at the turn of the 19th century. Tablets 1. to 4. were clearly laid at the same time, 5. brings us up to the recent past and 6. indicates that the wing to the right of the main entrance was added twelve years after the original building.


1.
'THIS STONE WAS LAID BY
D. FORD GODDARD ESQ.
MEMBER OF PARLIAMENT
FOR THE BOROUGH
NOVEMBER 29TH 1900
EADE & JOHNS ARCHITECTS.'

4.
'THIS STONE WAS LAID BY
THE MOST HONOURABLE
THE MARQUIS OF NORTHAMPTON
PRESIDENT OF THE
RAGGED SCHOOL UNION
NOVEMBER 29TH 1900.'