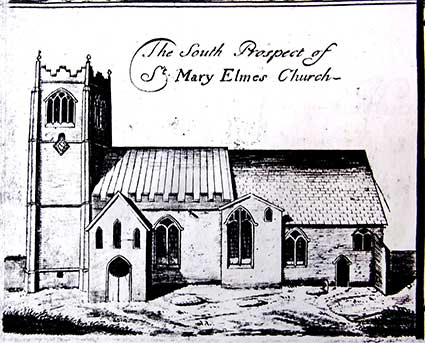 Courtesy Stephen Govier, Suffolk historian
The engraving above is from John Ogilby's map of Ipswich, 1674.

Situated, logically, in Elm Street this ancient church has its own significance in the history of Ipswich. There was an earlier church near this site, dedicated to St Saviour, but St Mary-at-Elms is known to have existed by 1204 and may be older. In a charter of 1204, both St Mary-At-Elms and St Saviour's are named among the possessions of the Austin Priory of the Holy Trinity, which was situated on the site of Christchurch Mansion. St Mary-at-Elms is again named as a possession of Holy Trinity in 1291, and it remained so until the priory was dissolved in 1536. It was rebuilt in the early 14th century and it had a nave and chancel, together occupying the length of the present nave, with north and south transepts, and presumably a tower. The north aisle and the west tower, both of brick, were added in the 15th century. In 1848 the south porch was repaired and the 12th century doorway restored. There was a restoration by R. M. Phipson in 1860, with the major rebuilding of the chancel by E. F. Bisshopp in 1883. 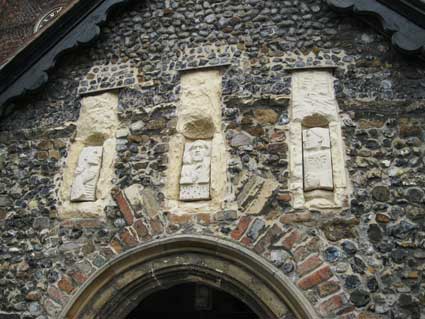 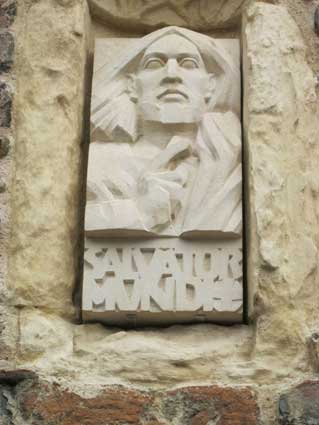 2013 images
Three small niches above the porch door were furnished with contemporary relief sculptures by Charles Gurrey in 2006. The three modern sculptures worked in Ancaster hard white limestone replaced those which would have been in place until the 16th century Anglican Reformation. The sculptures depict The Blessed Virgin, depicted as Stella Maris, Our Lady Star of the Sea because of the importance of this dedication for the ancient port of Ipswich (left), St John the Evangelist holding the gospel inscribed with his symbol, an eagle (right) and in the centre Christ as the Saviour of the World with the lettering:

See our page on Public clocks in Ipswich for a 2018 view of the tower and its clock.

29 Elm Street
A gateway to the north of the St Mary-at-Elms tower takes you through to the St Mary-at-Elms cottage of 1487 (although the Listing text quoted below mentions 1467): named by many as the oldest inhabited building in Ipswich. Compare this with the dendrochronolgical date of the Isaac Lord house and we think it's a tie...). It once stood in the grounds of Thomas Seckford's estate and housed those who looked after his stables. Thomas Seckford (1515-1587), M.P. for the borough, founder of Woodbridge School and courtier of Elizabeth I,  built a mansion, Great Place, at the north of the estate fronting Westgate Street. For illustrations of the Great Place, see our page which includes the section 'Before Willis'. In 1846 the dilapidated mansion was partially demolished to cut through Museum Street (incidentally the bulbous bannisters – and perhaps the staircase – in Arlington's Restaurant, Museum Street come from Great Place). The cottage was restored in 1984-5 and now houses a Parish Room on the ground floor with a flat above. The church and public sculpture (see below) are well worth a visit; a taste of Walsingham in Ipswich with very ancient parts of the building such as the 11th century Norman doorway still in use. Simon Knott's Suffolk Churches website gives further insights and is listed on our Links page. 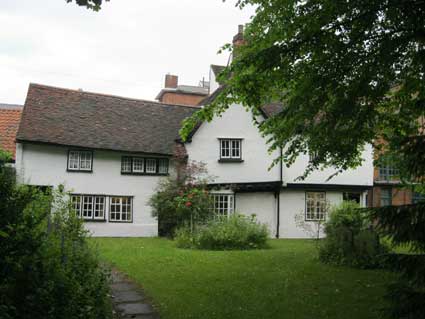 The Listing text reads: "A picturesque group of C15-16 timber-framed and plastered cottages, now tenement. They stand at the north side of St Mary at the Elms Churchyard with the pleasant greensward of the graveyard between them and the Church. 2 storeys. The east cottage has a cross wing at the west end and a jettied upper storey on the whole front. The cross wing has exposed joists and remains of brackets with capitals and shafts. It has a bay window with casements with glazing bars and small panes. The windows generally are small casements with glazing bars. There is the remains of a moulded wall plate and part of a billet moulded bressumer. The main block has a range of mullioned lights on the 1st storey. This cottage is said to be dated 1467. The cottage at the west end has fewer original features. Roofs tiled." As far as we know there are no visible letters or numerals on these buildings.
Incidentally, just over the wall to the left of these cottages is The Black Horse public house (see that page for another view of the cottage) which has a claim to being the birthplace of Thomas Wolsey. 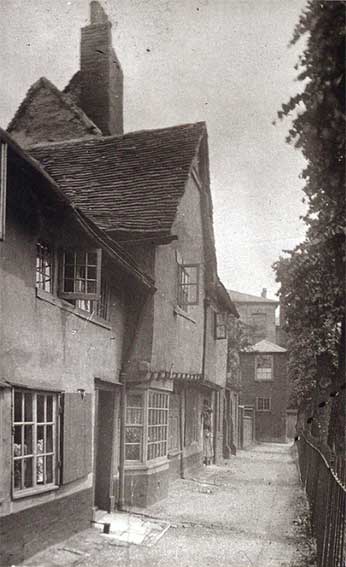 Image courtesy The Ipswich Society
The above fascinating photograph from the early 1900s is an easterly view of St Mary Elms Church Lane, looking towards Museum Street with St Mary at the Elms Churchyard on the right. At this date iron railings separated the cottages from the churchyard. The lane turns a sherp right-hand turn at the small building and eventually exits onto Elm Street. The photograph comes from The Ipswich Society's Image Archive (see Links).

The brick pier on the corner of Elm Street and St Mary Elms Church Lane (which once had a working electric light on top of it) carries a plaque with gothic lettering below a crucifix: 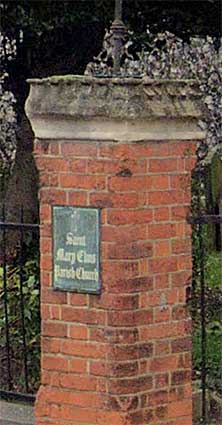 Above right: the church, churchyard and lane leading to the cottages.
The Church of St Mary-at-Elms, No 1 Churchyard (St Mary-at-Elms Cottage) No 25, Smith's Almshouses – see the image below – & Nos 29 to 33 (odd) Elm Street form a group as detailed on the British Listed Buildings website (see Links) St Mary-at-Elms is the Anglo-Catholic church which is home to the wooden sculpture of Our Lady of Ipswich by Robert Mellamphy. 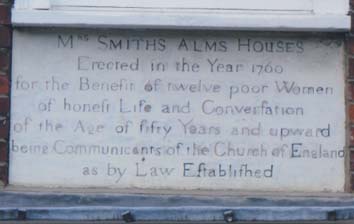 [Photograph courtesy Mike O'Donovan]
Opposite St Mary-at-Elms is this tablet. See our page on More almshouses.

Tam sculpture
Under the trees – sadly not elms – next to the church is a quiet, meditative sculpture by Honoria Surie called 'TAM', the letters carved into the stone plinth. 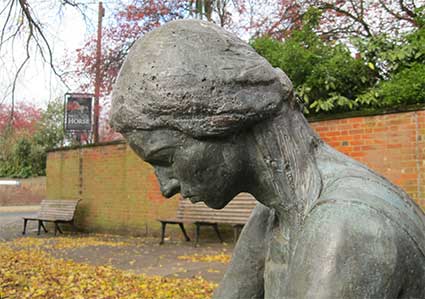 2018 images
Above left: the sculpture with St Mary-at-Elms cottage behind the wall in the background. It is only in the autumn winter and early spring that this work of art is clearly visible due to the dense foliage above at other times. 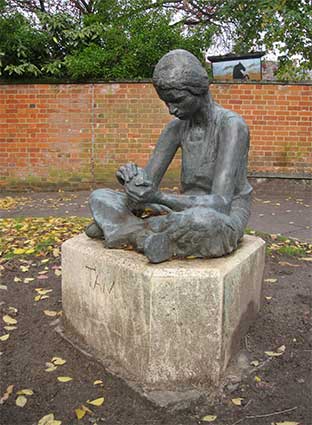 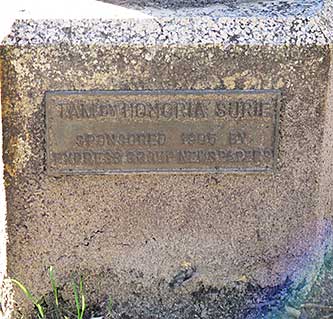 Above right: the plaque on the reverse of the plinth reads:

The explanation for this is given by former planner and Town Manager for the Borough Council, John Field:
'1995 – Tam
A year or so after the Giles statue was first erected, I was walking with friends in Rendlesham Forest and passed by the studio of the sculptor, Honoria Surie, and noticed in the garden the Tam sculpture. I was immediately taken with it and felt that we should try to find a good home for her in the town centre. I mentioned all this to Derek Warsop; we went to see it and he agreed that we should try acquire it for the town. In financing the Giles statue, Express Newspapers had provided a sum for the sculpture’s future maintenance. Derek approached the newspaper and received their agreement for the money to be used by the Council to acquire her for the town and she was acquired by the Council from these funds. The grass and treed area close to St Mary at the Elms was chosen as a suitably tranquil location for her. My photograph shows Derek with the sculptor and the model, her daughter Tam (who had in the meantime changed from being a devotee of flower power to that of the punk movement).
Honoria Surie, the artist who made Tam, was born in Hertfordshire in 1944. She trained at Watford School of Art and is now a painter and potter. The bronze of Tam, the artist's daughter (Tamasin Dorcas Hussey, born 1974), is Surie's first work in the field of sculpture and is sited on a short plinth on the grass triangle between Black Horse Lane and St Mary Elms Church. The 1995 sculpture is made of bronze and has a calm and serene feel to it in keeping with its location. Under the name of Honor Hussey the artist also ran the Butley Pottery at Mill Lane, Butley.' (Ipswich Society Newsletter, January 2021)