Long missing from this site (the nearest we got was Needham Market and Bury St Edmunds), this is a glimpsed railway journey image until we made a proper trip to Stowmarket. 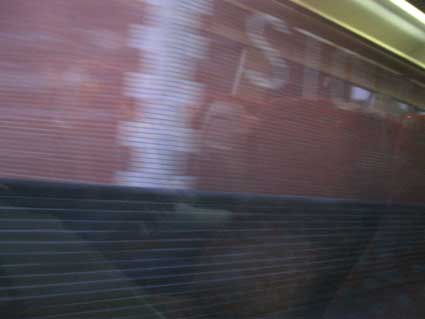 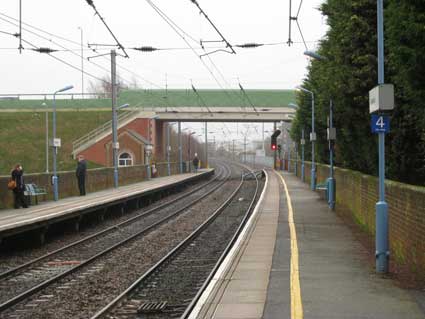 We noticed from the train that, unusually, the station's name is picked out in pale bricks against a red brick background on both inner walls of the relatively recent bridge which carries a new road, Navigation Approach, over the line close to the platform end. The bridge links the town with the Cedars Park development and has a relief mural depicting the history of the Navigation, showing the horse-drawn barges and the maltings along the towpath. 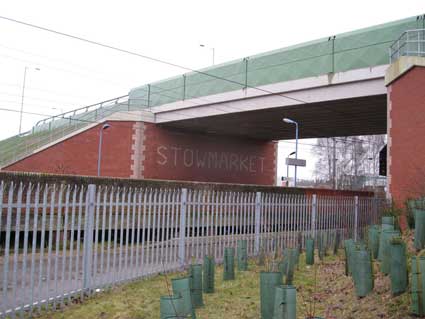 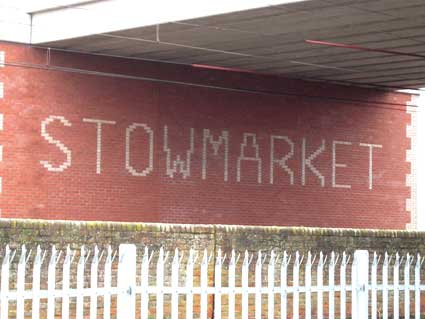 The bricklayer/letterer must have had quite a challenge. Diagonals are particularly tricky (see the 'W', 'R' and 'K' in particular). 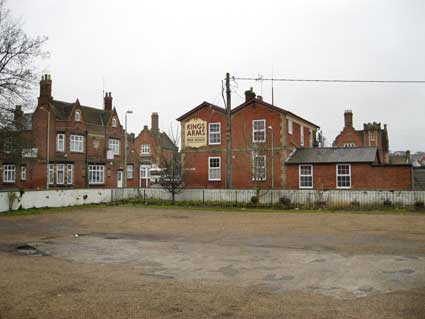 Above: the view over an empty plot showing the two public houses which once acted as a gateway to the railway station yard. By 2013, only the Kings Arms is still open and the original cream cartouche panels can be seen beneath modern painted signs. 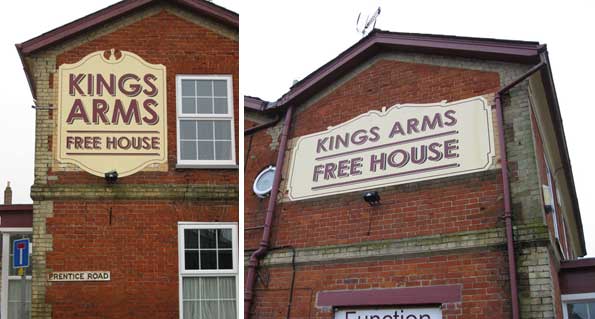 Below: sadly, the station building itself, typically attractive architecturally for this line, bears no integral lettering (compare with Thetford station). 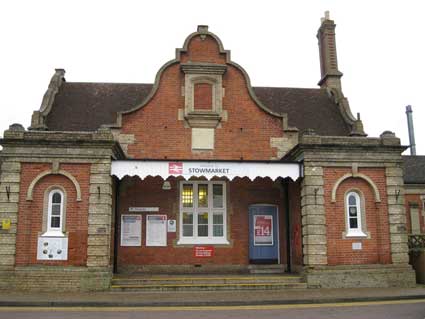 The platform boasts a signal box, long unused, by the look of things, which is right beside the level crossing between the town and the Stowupland side of the line. Over on that side the former public house, The Duke Of Wellington, plied it trade here at 7 Stowupland Street. This pub building is now used as a chiropody practice. (see the Lost Pubs Project in Links). The side wall shown below still bears the shaped white panels on which the pub lettering sat and there is a white blank window in the centre of the frontage which was probably also lettered. 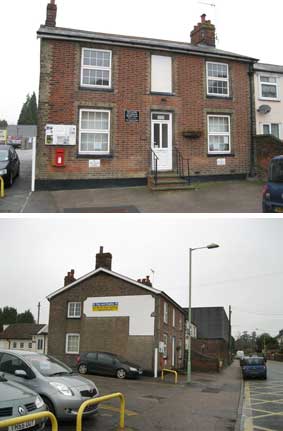 Back over the railway and The Pickerel (named after a young pike) is nearby with its well preserved relief lettering: 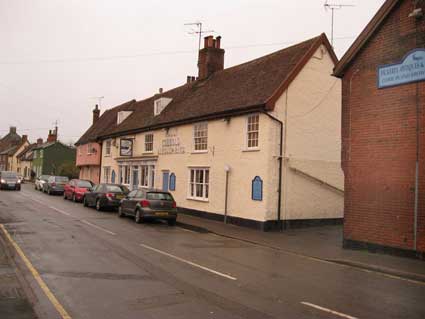 ... although the frosted lettering on the front double doors has the look of modern vinyls (compare with The Lion's Head in Ipswich). Suffolk CAMRA (see Links) tells us that this pub is listed historically in Stowupland,and is a 16th century timbered pub having two bars and a separate restaurant plus a small riverside garden. Confusingly, the building is said to date from the early 18th century (perhaps they mean the present frontage). Publican are listed back to 1800, with John Cobbold taking over the pub in 1923. 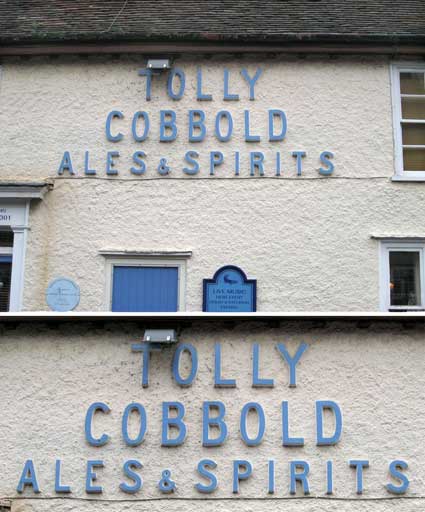 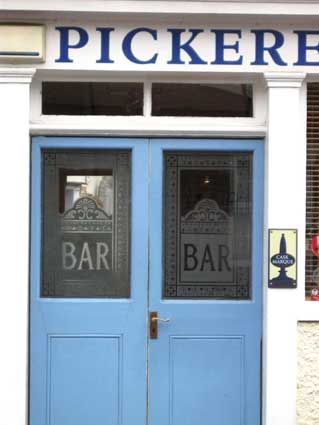 A short walk round the back streets on this side of the main road and a vague, once-lettered panel high up on a gable can be see, but what might it advertise? A few more paces and the answer is seen: The Royal William public house in a very tucked away spot, 53 Union St East. The Suffolk CAMRA website (see Links) tells us that:
"This unspoilt back-street pub is a former beer house that has only had a full license since 1962. Tucked away, but located quite close to the magnificent early Victorian railway station. The beer is served on gravity from a small temperature controlled room behind the bar or from a new gravity servery located in an outside building. Darts and cribbage teams are active here, otherwise friendly locals and good conversation are the order of the day. Treasure it, there are few left like it." 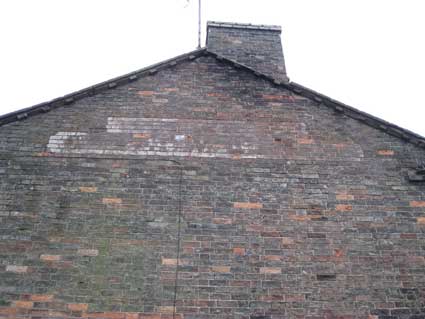 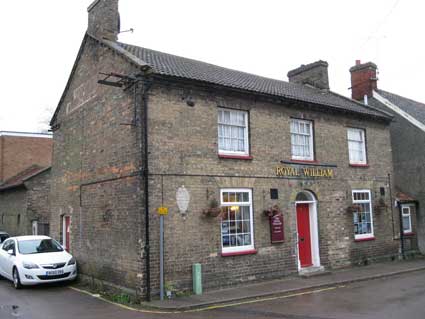 Over the Bury Road an towards the town centre we find 12 Bury Street. as well as three foliage discs on each gable, there are floral wreaths in plaster with lettering within. 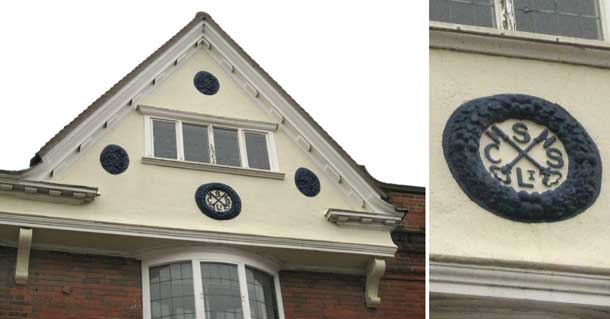 Within a pair of crossed keys:

The superscript letter after the 'L' looks like an 'I', but we think it is a 'T' with an underline (presumably for 'Limited'). 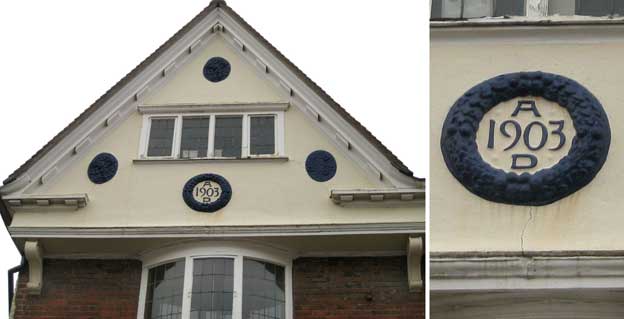 [UPDATE 15.7.2013: "Noticed on your web site that you were looking for info about the lettering CSS Ltd. The building used to be the The CoOp originally called the Stowmarket Co-Operative Society Limited. So it is SCS Ltd. Hope this helps. -Ashley Barnard"] 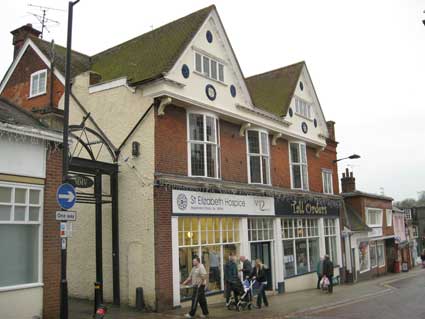 Across the Market Place and one enters Ipswich Street with a coaching entrance:

During the 18th century The Fox coaching inn stood here, and from its yard a daily coach, 'The Regulator', ran to Bury St Edmunds and Ipswich. 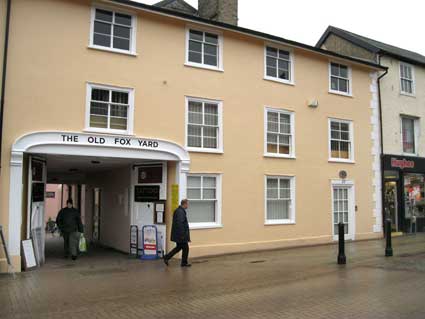 This compares with a similarly curved arch coaching entrance in Eye. 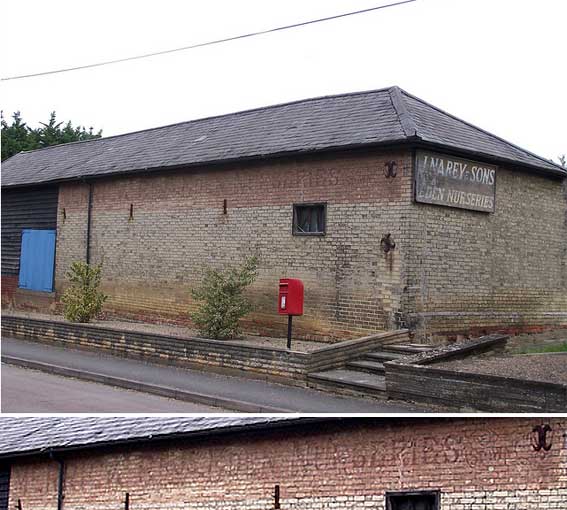 The main company name is painted beneath the eves in large and small capitals (with initial letters projecting above and below the smaller caps) with decorative serifs. The last word is small and informally rendered surrounded by curlicues. On the screwed-on board at the end:

From The London Gazette, 12 June, 1914:
"NOTICE is hereby given, that the Partnership lately subsisting between us, the undersigned, Edgar Cyril Merrick and Arthur Howard Merrick, carrying on the business of Nurserymen, at the Eden Nurseries, Stowmarket, in the county of Suffolk, under the style or firm of " MERRICK BROTHERS," has this day been dissolved by mutual consent. All debts due to or "owing by the said late firm will be received and paid by the said Edgar Cyril Merrick, who will continue the said business under the style or firm of "Merrick Brothers" aforesaid.
—As witness our hands this tenth day of June, 1914.
E. CYRIL MERRICK. ARTHUR H. MERRICK."
Perhaps J. Narey later bought the business from Edgar Cyril Merrick?

[UPDATE 29.9.2014: About time that we put up these details of the building in the winter sunshine.] 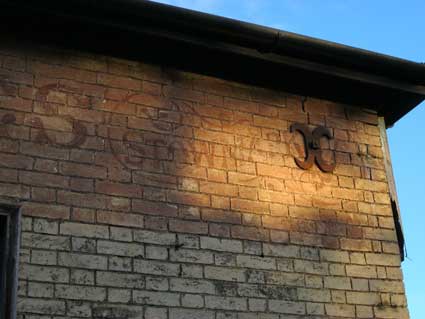 At the end of the sign and below the metal feature, the sign-writer has signed his work. We're pretty sure that this says: 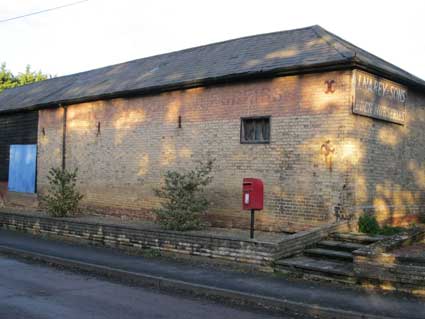 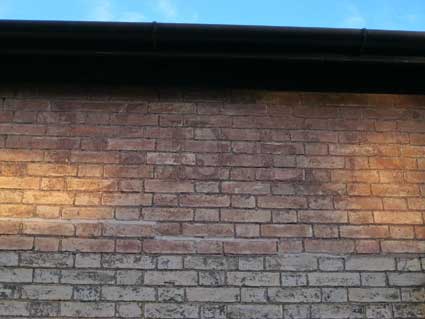 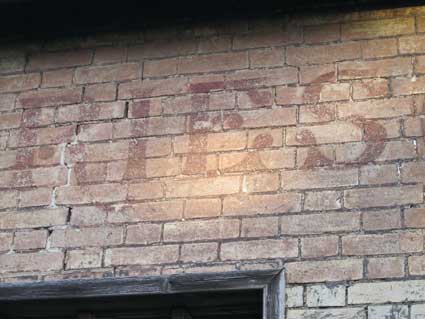