Tewkesbury is an attractive, historic town dominated by timber-framed buildings with overhanging eaves and has a fascinating maze of small alleyways behind the main streets. It is situated on a spit of gravel just above flood level at the junction of two great rivers (The Severn and Avon) . The town has always been a favoured resting place for travellers on the highway which winds it's way up the Severn valley. Tewkesbury is remarkable in that its medieval layout and character has survived to this day. At the beginning of the 19th century it was one of the most important towns in the country but suffered a decline and from 1850 to 1930 there was virtually no new building in the town. As a result, the development of the town from it's earliest days can be seen in it's street pattern and buildings. To walk around it is a rewarding experience. Tewkesbury's famous Abbey was founded at the end of the 11th Century as a Benedictine Monastery.

Alleys
A feature of Tewkesbury buildings is the wide continuous window at the first floor level on a number of prominent properties, all which were re-fronted in the mid 17th century. Other characteristic features of Tewkesbury came with an expanding population in the late 17th and early 18th centuries. With building construction constrained by the flood plain the height of buildings was raised and rows of cottages reached by about 90 alleyways (although only 30 remain today); these alleys had formerly served barns and workshops; later additional dwellings were built behind existing houses fronting the streets. The poverty, cholera, filth and overcrowding which afflicted the alleys in the 18th and 19th centuries can only be imagined. 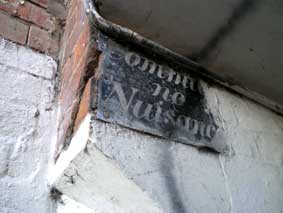 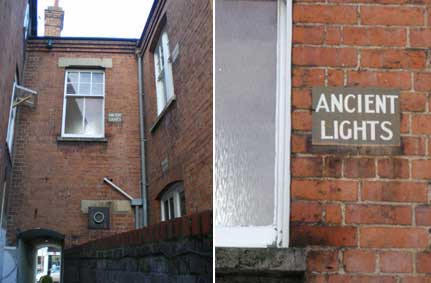 Eagles Alley leads off High Street. George Eagle ran a successful butchery business in 1836 from the shop fronting the High Street. It has an intriguing sign lettered on a sheet of black-painted metal fixed up high near the 'ceiling' (now partially obscured by careless whitewashing):

[We have found a similar sign in St Albans. And, although not illustrated on this site yet, we learn of another 'Commit no nuisance' sign on the wall of Christ Church Spitalfields in east London – there is more information on that page.]

This imperative command contrasts with another, rather mysterious, sign in this alley high up on the rear wall of the High Street buildings:

In fact, in our photograph you can just see that there are two identical signs by the other windows in this building. The excellent Historic window guide published by The Conservation Team at Tewkesbury Borough Council (www.tewkesbury.gov.uk/media/pdf/7/8/Historic_Window_Guide.pdf) defines the word 'lights' as: "the areas or compartments within a window, framed by mullions, transoms, or glazing bars, through which light is admitted". The right to light is a form of easement in English law that gives a long-standing owner of a building with windows a right to maintain the level of illumination. It is based on the Ancient Lights law and the rights are most usually acquired under the Prescription Act 1832. In the centre of London near Chinatown and Covent Garden, particularly in back alleyways, signs saying "Ancient Lights" can be seen marking individual windows. The design and construction of the BBC's Broadcasting House in Portland Place, London W1 was also affected by locals declaring their right to ancient lights. It resulted in a unique asymmetrical sloped design that allowed for sunlight to pass over the building to the residential quarters eastwards, long since demolished and now home to the new Egton Wing.

Back outside no. 12 High Street, Tewkesbury it's easy to miss:

on the boss of the support for the jettied frontage, with the date split by the vertical rope which suspends the unfortunate ovine beast. The lettering and foliage surround is picked out in gold on the dark wood/black background. This is just below the Bajee Indian restaurant (sign partially visible in the image) and the former public house is Grade II* listed (so many of the Tewkesbury town centre buildings are listed). There is furthermore a carved circle containing the date '1879' (?) on the front beam facing the street adjacent to this '1519' boss. This may indicate that the original inn buiding was refaced in the 19th century. 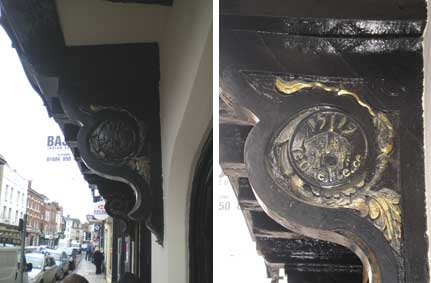 Rivers
The natural confluence of the River Severn and the River Avon has been engineered over the centuries. At normal summer levels, the River Avon is about 7 to 8 foot above the Old Avon and River Severn. Passage between the Severn and Avon is facilitated by the Avon (or Tewkesbury) Lock. Mill Avon is the name given to the canalised stretch of the Avon which runs from the weir north of Tewkesbury past the Brewery and Flour Mills (shown below), the Abbey Mill and weir and eventually into the Severn to the south-west of the town. 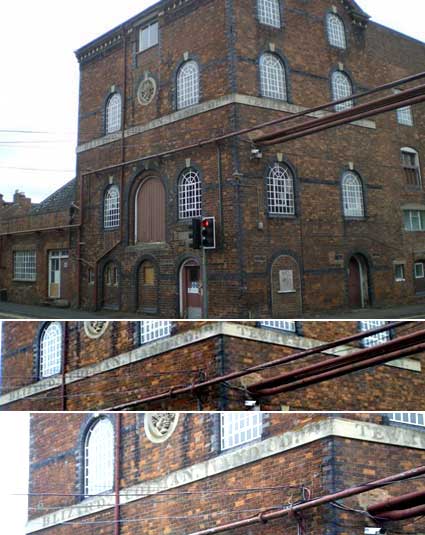 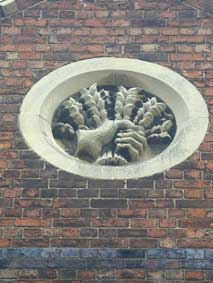 The former Blizard and Colman Brewery stands on the corner of Quay Street and Back Of Avon. Brothers George and Walter Blizard established the brewery when forming a partnership with William Colman of Norwich.  The business was acquired by the Wickwar-based Arnold, Perrett & Co.Ltd. during 1893. A fine carved stone roundel of a disembodied hand grasping ears of barley sits above the strip which runs just below the second storey windows bearing the faint words: 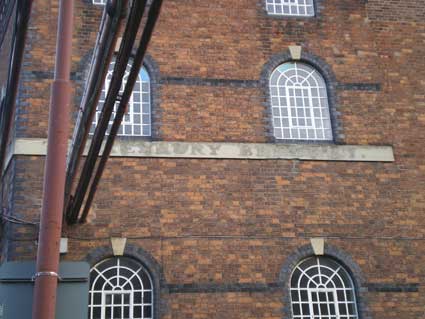 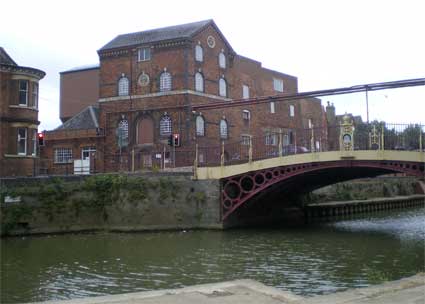 Just across the river is Healing's Mill shown below empty and in the early stages of dereliction. There are two huge mill buildings with massive silos and various outbuildings. Once roaring with the sound of mill machinery, it closed in December 2006 is now (2011) disused and slowly gathering dust. The excellent serif'd lettering plaque is high up, but clearly readable with the Roman numeral date much smaller: 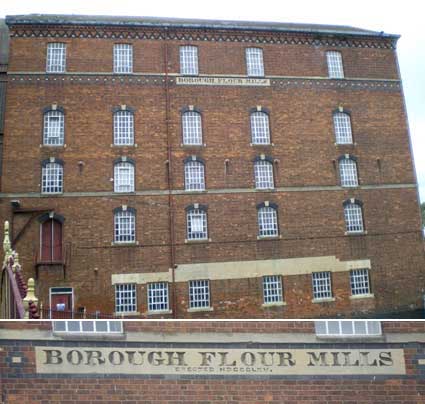 This is just one of the mill buildings and it has serious structural faults, leaning at an odd angle, hence all the reinforcements on the walls further down. Note also the carved date very high in the diamond dark brickwork: '1889': 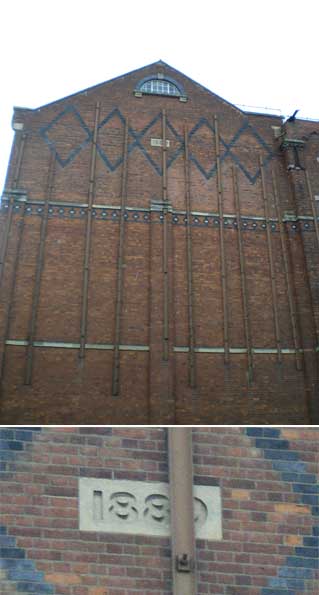 If you look at the waterline against the courses of bricks the tilt is obvious, presumably due to insufficient foundations on the flood plain of the rivers. Some modern silos make up part of the site. This more modern mill (compared to the Abbey Mill downstream) stands on the site of the town quay; parts of the mill date to 1865 when it was built for Samuel Healing and it was once thought to be the largest and most modern flour mill in the world. The mill has, in the course of its history, had three forms of transport in and out: road, railway (a victim of the Beeching cuts) and canal/river barge. The original cast iron bridge between the brewery and the flour mills has a second smaller iron bridge built up against it; we hear that a railway ran into and out of the flour mills and this extension to the bridge may have carried it.

A little further down Mill Avon one finds the Abbey Mill, now a residential building, with its weir. Nearby is the half-timbered rake of houses named:

in white characters on one of the dark painted bresummer beams beneath the overhang (circled in the image below). A venacular use of serif caps above and italic serif caps below. 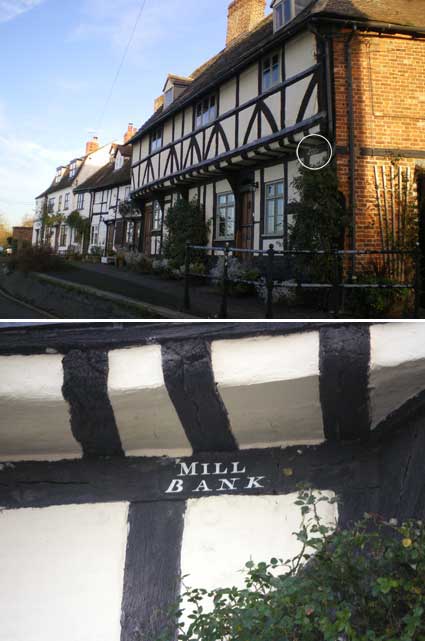 Wandering up the hill from Abbey Mill we find:

in red painted serif caps on a cream cartouch with red outline. This is obviously a relatively new sign, but the building is clearly old and the name resonates. 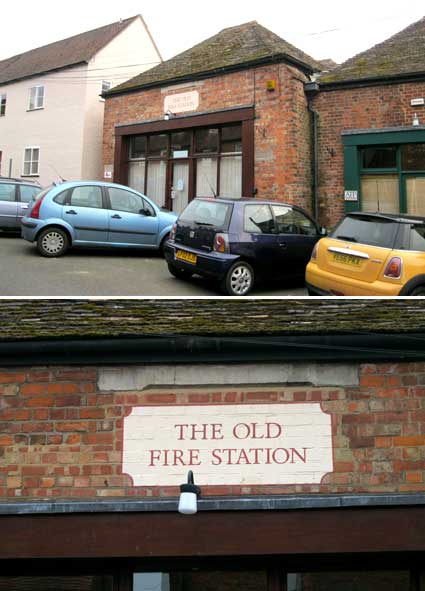 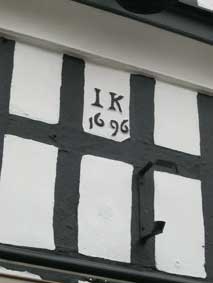 Further up the road, standing opposite the Abbey is the timber framed The Bell Hotel, formerly known as The Angel. Some parts of the fascia of The Bell look rather recent, but on the first storey is the inscription:

'IK' is Jacob Kingsbury, presumably the original owner. It is a fine example of a 17th century inn. Parts of it, e.g. the cellar, are believed to be even older. It is recorded that it was previously a medieval hostel associated with pilgrims to the nearby abbey.

Old Baptist Chapel Court
One of the many Tewkesbury alleyways (in this case opposite the school shown below) bears the shaped plaque above the entrance:
'THIS COURT contains an early Baptist Chapel the Home of the Baptist Church whose records date from 1655. The building has furniture of that period. The Burial Ground has the Tombs of the Shakespeare & other noted Families.' 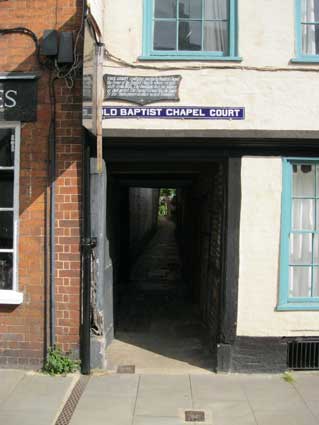 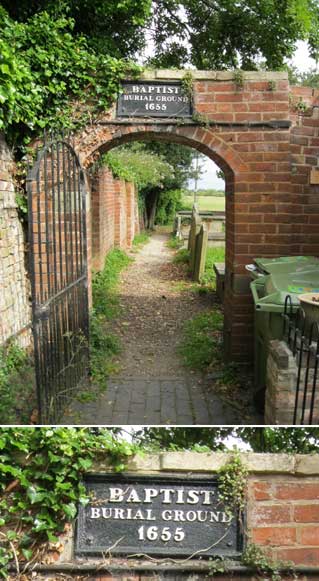 So it is that the clearly signed: 'OLD BAPTIST CHAPEL COURT' - in enamelled white capitals on royal blue ground with a white border line - takes us down past this historic building on the right and eventually to an entrance arch bearing a cast iron sign with embossed white caps on black ground: 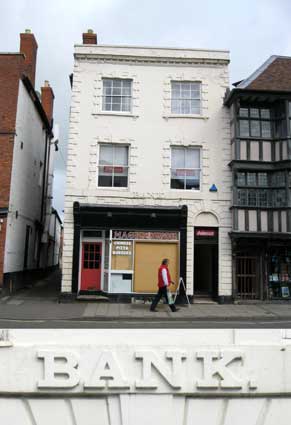 A few yards further along is The Cross memorial which stands on a roundabout at the meeting of three roads. The panel on the first floor of the corner building of Barton Street and High Street bears the words:

This reflects the long history of laying the dead to rest with either carpentry (coffin manufacture) or masonry (tombstone carving).

Tewkesbury environs
In the village of Kemerton a few miles from Tewkesbury we find:

We assume that the apparent full stop after 'Landaus' is actually a worn comma. The curlicues are a delight. This American-sounding vocabulary is a surprise. A landau is a coachbuilding term for a type of four-wheeled, convertible carriage.  A waggonette is defined as a light four-wheeled horse-drawn vehicle with two lengthwise seats facing each other behind a crosswise driver's seat. A hunter is, er... a carriage used in hunting, naturally.
Additional information from British Listed Buildings (see Links): "The listed Lindum House and its adjoining shop (sometimes called Cornerways)  in Kemerton dates to the early 19th century with late 19th (shop) and mid-20th century alterations. The shop front has fluted pilasters, ornate consoles and moulded cornice with a 20th century multi-paned replacement window and six-panelled door. The lettering shouts out at travellers on the main road through the village."