Regency Cheltenham contrasts greatly with more modern retail and industrial areas of the town. Quite close to Cheltenham Ladies College (which was established in the mid-19th century for the daughters of Cheltenham’s gentlemen), we find the clutch of wine bars, boutiques, antique shops and upmarket coffee shops of the

The name is cut deep into the stonework above the arched window and entry (shown below). Across this court stand the first of the 'armless classical ladies', as the local tourist guide refers to the almost life-size caryatids (supporting pillars in the shapes of the human form). 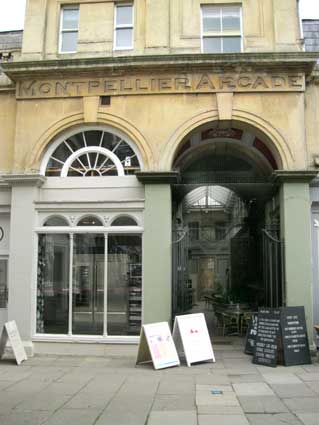 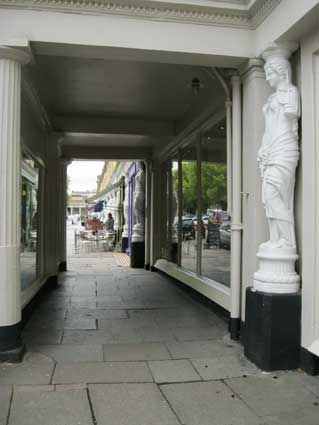 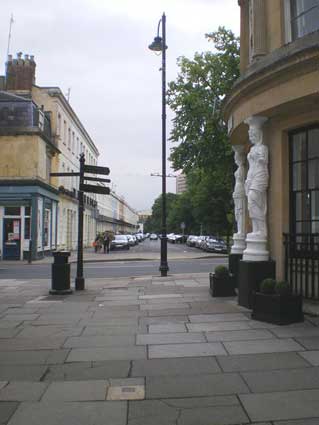 Montpellier Walk properties are separated by these caryatids. The figures are based on the classical models on the Erechtheion in Athens. There are 32 of them and they are not all the same. Only two of them are dated from 1840, made by the original London sculptor Rossi from terracota. The remainder were created by a local man from Tivoli Street. Two of them, located on the extension of the bank, were added in the 1970s. Montpellier Walk was designed by W. H. Knight, the architect of the monumental Cheltenham Public Library.

In the 18th and 19th centuries the name of French spa town of Montpellier had been a byword for a pleasant healthy place – and that name was chosen in 1809 by Henry Thompson for his newly established spa. It was laid out in the early 18th century with attractive villas and terraces surrounding spacious ornamental gardens, now known as Montpellier Gardens. In the 1830s and 1840s specialist shops were built and Montpellier developed as a classy shopping area, the character of which it still retains today. 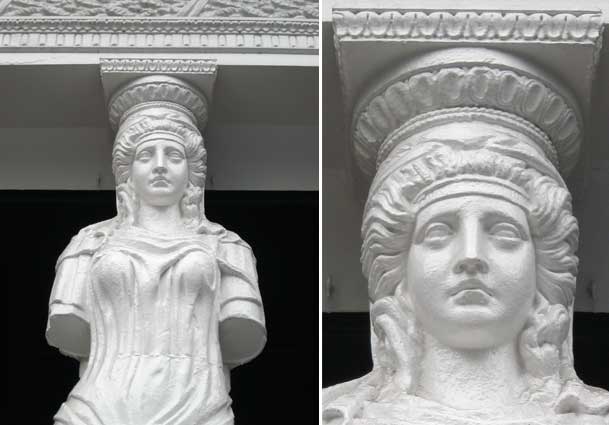 Montpellier has a special place in history of Cheltenham. It is here that the first Cheltenham spring was discovered in 1716. Thanks to magnificent villas and terraces of Montpellier, Lansdown, Bayshill and Suffolks, Cheltenham gained the reputation of being one of the most beautiful towns in England.

(below) is carved into the stone wall at the end of the Walk, the large and small capitals painted black against the honey surround. This is close to the entry to the domed building which is the original Cheltenham Spa: the Rotunda, today home to Lloyds TSB, originally the building of the Montpellier Spa where the gentry took the waters. The interior can be visited during the bank's opening hours and it's definitely worth it (see the interior photograph below). 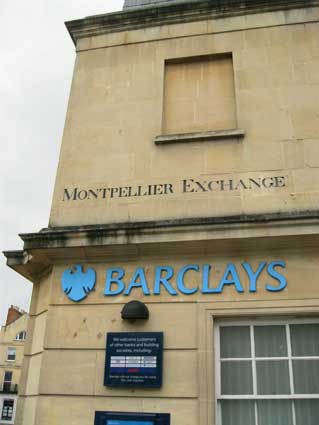 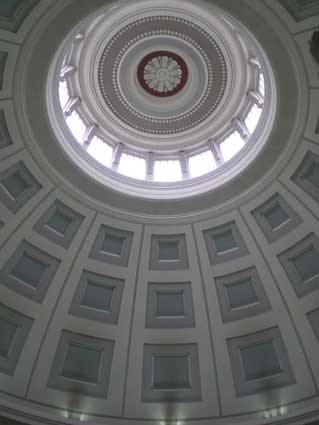 In 1809 Henry Thompson constructed a wooden pavilion with a colonnade and by 1817 he had to rebuild it in stone as Montpellier Spa became more and more popular. He employed the architect G. A. Underwood, who completed the building with a statue of crouching lion on the parapet. It wasn’t until Thompson’s son Pearson asked J. B. Papworth in 1826 to take over the project that the building got its dome. Papworth, a London architect and in terms of national reputation the most important architect to work in Cheltenham during that time, was inspired by Rome’s Pantheon. Even the dimensions are almost identical - 53ft high and 54ft across. The building became a bank in 1882 when Worcester City and County Bank moved in although balls and concerts still continued to take place in the venue which would seat the audience of 400.

The Daffodil Cinema, 18-20 Suffolk Parade
Although it doesn't appear to have integral lettering, The Daffodil is certainly worth celebrating here. It began life as Cheltenham’s first purpose built picture palace (750 seat capacity), opening its doors to the public on the 5th October 1922. On 7th September 1963 The Daffodil screened its last public film due to falling ticket sales and was in turn a bingo hall and antiques centre, closing in 1989. 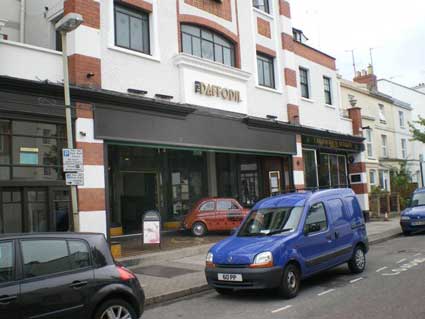 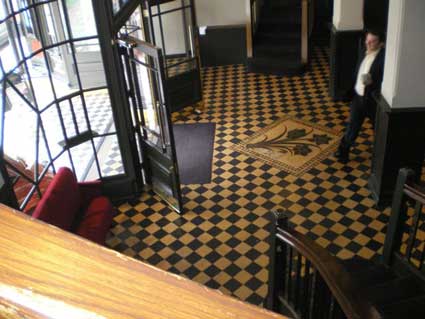 An extensive renovation started in1996 during which many original features and fittings were restored and reinstated including the original projectionist machinery (now displayed in the upper circle) and a pair of red plush courting couple “kissing seats” (at left of the interior shot above) which now occupy pride of place in the Terrazzo mosaic foyer. Today the building is a civic award winning iconic Cheltenham landmark (bar/lounge/dining room) as well as one of country’s finest surviving examples of original Art Deco cinema design. We liked the small, glazed ticket booths to the far left and right of the entrance, at least one of which is still used as a manager's office. 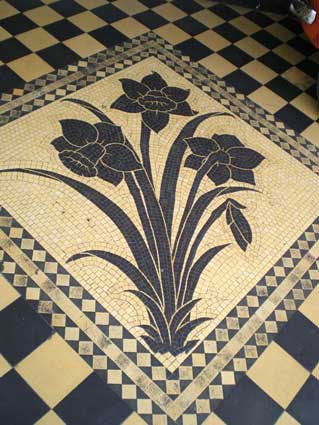 A stroll down High Street, Cheltenham
Town centre: at Cobbler's Corner an art nouveau'ish canopy over a shoe repair, engraving and key cutting business obscures the mirrored sign above which curves all the way round the building. From the far side, reading clockwise, it says:

The upper/lower case phrases are in a bespoke, cursive script replete with flourishes. The initial capital letters of the other words are very decorative. 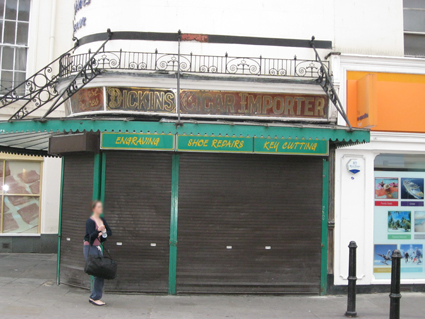 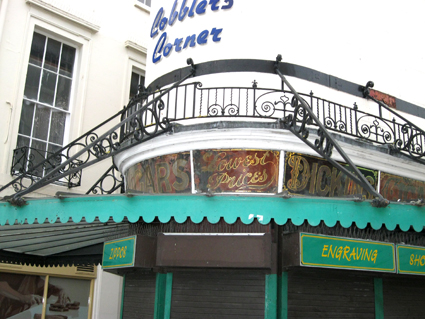 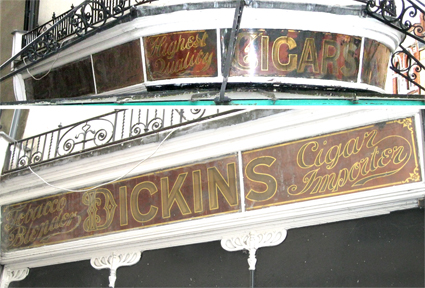 A minute or so later, on the right... 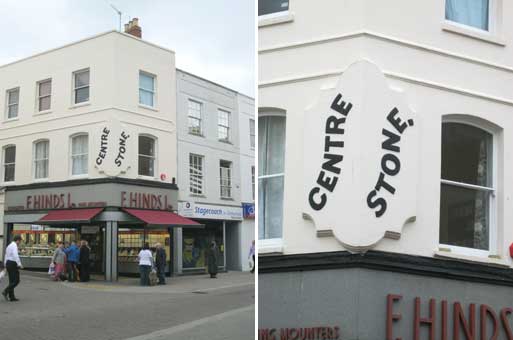 At the other end of the social spectrum, so to speak, we move to one of the more workaday shopping streets in Cheltenham where you can find Wilkinsons and Peacocks. This enormous and well looked-after piece of lettering hangs on an unusual shaped cartouche which wraps wround the corner of the building at first floor level. F. Hinds, jeweller, stands at the junction of Bennington Street and High Street. The serpentine lettering is in san serif capitals with an emphatic square full stop at the end. What does it all mean? We came across Rebsie Fairholm's excellent 'labour of love' website called Cheltonia (see Links) and discovered that this spot has considerable (now nearly lost) history:-

"During the first half of the 19th century, the northern end of what is now Bennington Street was occupied by the town’s main market place, moved away from its traditional site in the High Street to avoid offending genteel visitors with stray scraps of smelly vegetables and the noise of rough types plying their wares. The market was formed into a tidy square – or rectangle – with stalls arranged round it in an orderly manner. The High Street end became the site of a beautiful Regency shopping area called the Arcade, built in 1822. All of this was paid for by Lord Sherborne, who was one of Cheltenham’s main landowners at the time. In the entranceway was a stone known as the Centre Stone, which was deemed to be the central point in the town, from which distances could be measured and cab fares calculated. James Hodsdon in his wondrous gazetteer suggests there may have been an older market cross on the site previously."

Sadly, all that has gone now. There is much more information on Cheltonia to take you down the byways of history and away from the litter, Coke cans and dog-ends of the 21st century. Somebody determined that this historic spot should be comemorated in such a striking way and the current owners keep it in very spruce condition. Hats off.

Standing back from the street stands the attractive building:

Again, we're indebted to the Cheltonia website (see Links):
"Cheltenham Chapel, Jenner Walk. Well, at least dating this one isn’t difficult. A more detailed history of the chapel can be found in the article about Jenner Gardens [on the Cheltonia website], but this V-cut hand-chiselled plaque remains one of the few of its kind in Cheltenham, and one of the earliest. (In 1809 most of the town hadn’t yet been built, and little existed beyond the High Street.) The lettering is a fairly standard style for this period but the bar on the letter A is strangely high up. The panel is a slightly odd shape … perhaps it originally had some kind of border around it." 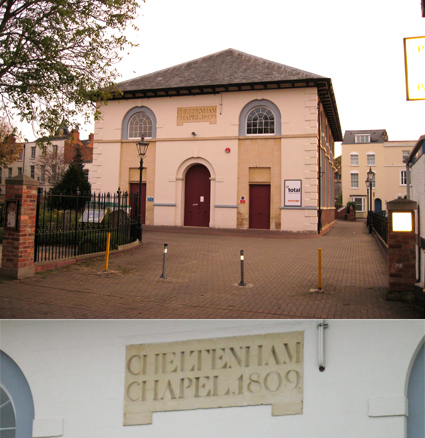 Over the road, a gnomic sign over a double shop-front which must originally have extended to the left. But what does it mean?

The tarnished mirror-backed lettering (compare with Dickins cigar emporium above) is repeated in the central vertical panel (close-up to the right) and we can make out its contents... 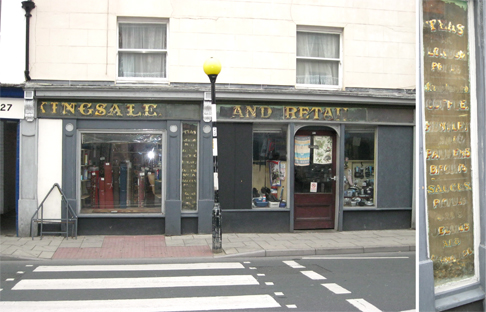 The words 'Teas' at the top and 'Marmalade' at the bottom curve round to bracket the rest of the sign, some lettering is in a decorative font, some plainer. Was the shop ownwer 'Mr Kingsale' (with his most emphatic full stop)? Why is 'And Retail' stuck on its own? Surely it should be 'Wholesale And Retail'?

A little further down on the same side, above the Aerials and Cable business is a high, weathered and little noticed trade sign in carved characters in a plain stone inset: 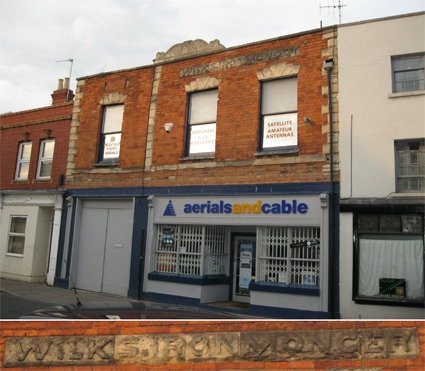 The 'Wilks Ironmonger' masonry detail at first floor level, 343 High Street is specifically mentioned in the Cheltenham Local Development Framework on this area: "Local details within the Lower High Street character area collectively enhance the character and appearance of not just Lower High Street but the whole of the Central Conservation Area."

On the other side of the road is:

on the eastern wall of the Royal Oak (currently Irish Oak): an old embossed lettered advertisement. 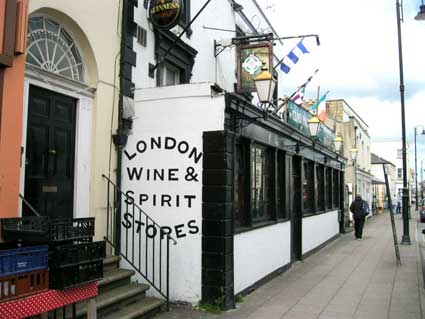 Continue down under the disused railway bridge which used to carry the line from Cheltenham Spa station to Cheltenham Racecourse and on the coner of Gloucester Road and Tewkesbury Road is a striking red brick building (with gothic clock-tower) bearing the words under the dentitioned lintel below the first floor windows: 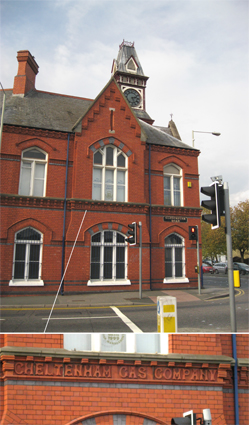 Here's to the modillion band, eh? 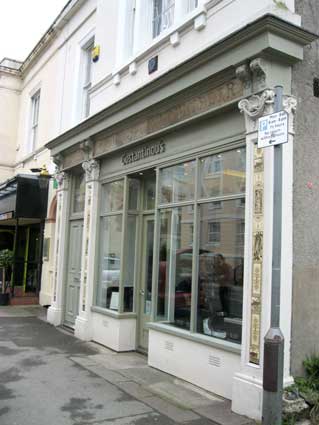 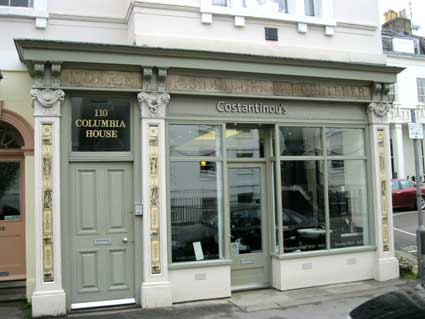 2012 images
Number 110 is Columbia House, now Constatinou's who have left the illustrated tiling and decorative lettering above the shop front. This was once the gamey: 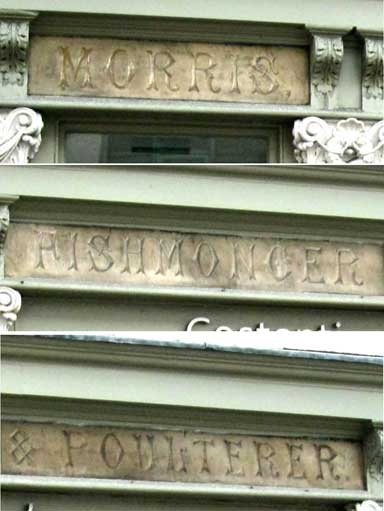 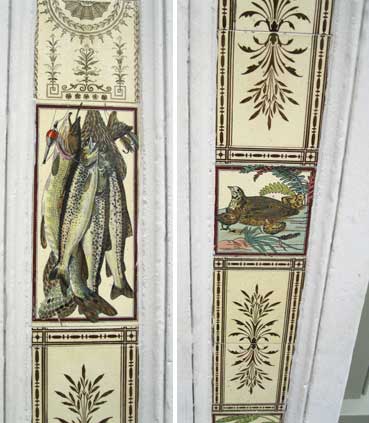 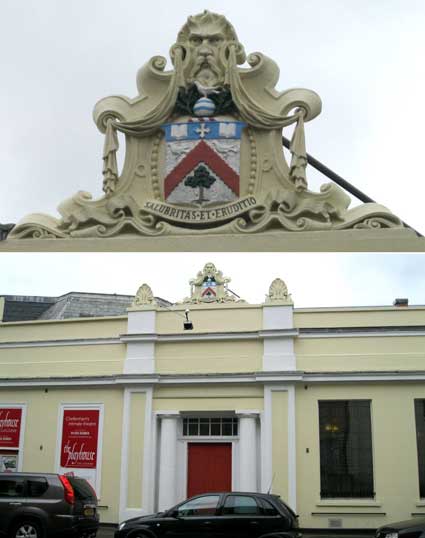 The Playhouse theatre at 47-53 Bath Road has a marvellous and eccentric crest atop the building which many might not have noticed due to the incredibly heavy traffic. The grotesgue mask, swags, 'peeled' crest flourishes and nicely coloured elements on the town's crest and on a flowing, curly banner at the base, the motto:

which means 'Health and Education'. Decoding the elements on the crest, we find the pigeon at the very top is sitting on a blue striped sphere and this represents the discovery of the fountain of spa water by a pigeon that made Cheltenham famous (there are still an awful lot of pigeons). This is sitting on top of a wreath of oak leaves. The two open books, either side of the silver cross, on the blue band represent education, particularly Pates Grammar School and Cheltenham College. The silver cross shows religion. The two pigeons represent the flock that gathered at the spa water spring. The Oak tree at the bottom is there to represent the tree lined Promenade and streets for which Cheltenham is also known. 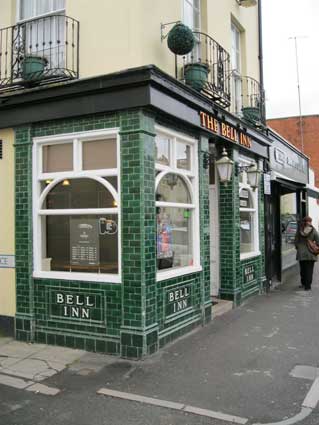 Across the road at number 70 is a nice green tiled public house frontage with the name 'BELL INN' clearly shown in white serif'd characters three times below the windows. 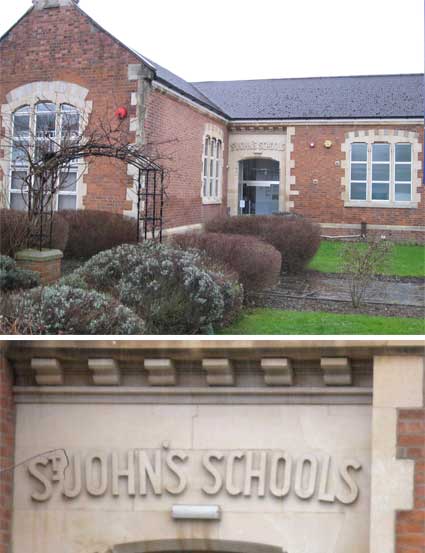 See also our pages on nearby Tewkesbury , Winchcombe, Upton-On Severn and on Hay-On-Wye.