2005 images
We know that Aldeburgh High Street boasts some fine buildings, mostly on the smaller scale, but proclaiming age and often wealth. Opposite the Aldeburgh Cinema this painted sign is so high that it is often missed. A puzzle: 'DINING ROOMS' is certainly at the bottom, but the rest -probably in more than one layer of lettering - needs some more decoding.

Here's the lettering on the front wall of 171 Main Street, now part of the Regatta Restaurant:
'To the Glory of God
and dear memory of
JOHN SHAW SHELDRICK
These Headquarters were given to St John Ambulance Brigade
Aldeburgh
by his wife
Margaret Maud Sheldrick
May 1948.'

Then, above a canine drinking fountain ...
'In grateful memory of
JOHN SHAW SHELDRICK
and his doggerel'

'Drink, Doggie drink, man is your debtor
And you never present your bill,
But faithful serve, for worse, for better,
Drink, Doggie, drink your fill.'

Aldeburgh: A Gnomon* of Sundials  [*We have no authentification for the use of this collective noun.] 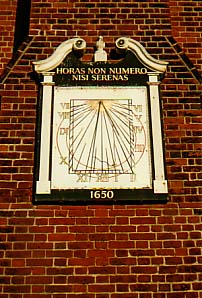 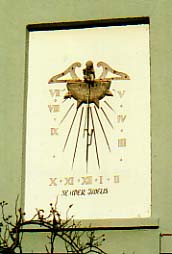 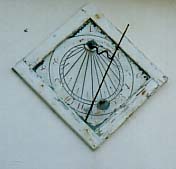 The first is on the Moot Hall on the sea front. The next two splendid examples are nearby (the second, appropriately, in Dial Lane) and the fourth, a 'lost' one in Hertford Place – at the Slaughden Quay end of town, the numerals rather faded. The support for the shadow-casting gnomon is 's' shaped in number 3, straight in number 2 and serpentine in 1 and 4. The first three are south facing, but number four is west facing, so the gnomon rises from just to the left of the bottom of the dial to achieve the correct reading from the sun. Roman numerals abound, also sundial wisdom:
1. 'HORAS NON NUMERO NISI SERENAS': 'I count the bright hours only' [as a sundial works only in the sunshine, this is 'either totally useless or utterly false'] with the date '1650' below square pillars supporting a broken scrolled pediment,
3. 'SEMPER FIDELIS': 'Always faithful'.
Example 2 has been beautifully restored with golden sun and rays above the house name 'CORREGGIO' (after the 16th century painter of Lombardy), the characters individually painted on beach pebbles set in cement. (See Links page for Suffolk Sundials and more sundials at Woodbridge and Guildford.) 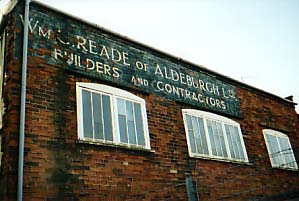 This sign survived close to the Jubilee Hall (original home of Britten's Aldeburgh Festival) on the wall of Reade's old workshops. Black painted brick with white lettering. The superior 'TD' of Ltd., the serif caps of the upper line and the block caps of the lower provide a varied sign readable from way past the Moot Hall. We believe that the wall was demolished by 2012.

Beautifully dated building, King Street
Below: close to the promenade an unusual red brick building (rendered and cream washed above the ground floor) with a gated area or tiny courtyard. 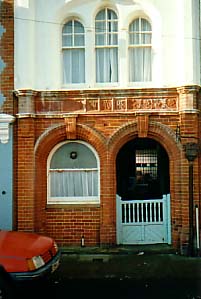 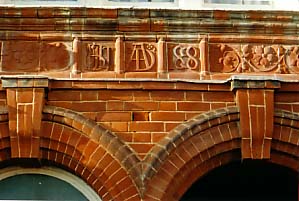 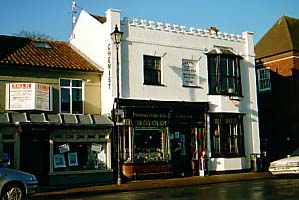 Howells and Brooks, Chemist in Main Street has a central blank window (where the olde worlde street lamp is casting its shadow in the photograph above) bearing the list: 'Toiletries, Perfume [this in cursive script], Cosmetics, Dispensing Chemist, Films'.  The 'leading edges' of the building bear the vertical word: 'CHEMIST' painted in black against snow white, see also the chemists shop in Ipswich's Felixstowe Road, Ipswich. And a few doors away: 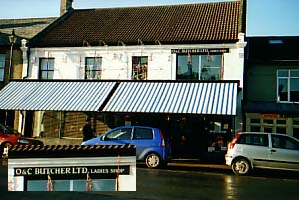 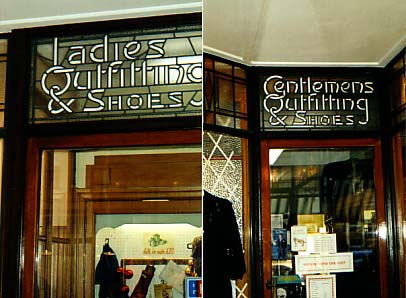 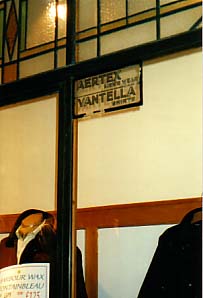 [Ampersand and 'Ladies Shop' in small caps] is painted, white on black, above the larger first floor widow and is probably preserved and retouched by the white washer of the whole building. Inside the entrance is one of the few surviving island glazed displays in the country and wonderful art deco stained glass above the other display windows:

Note the interlacing of characters between the lines. We have included the sticker in the internal display window: 'AERTEX Men's Wear / VANTELLA Shirts' for its period resonance. The present proprietors presumably like it too. 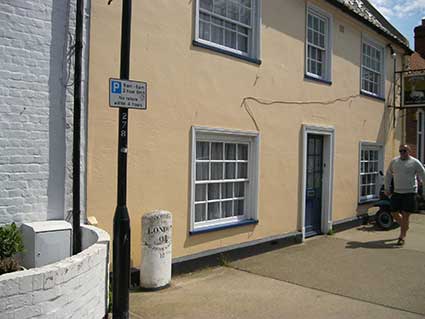 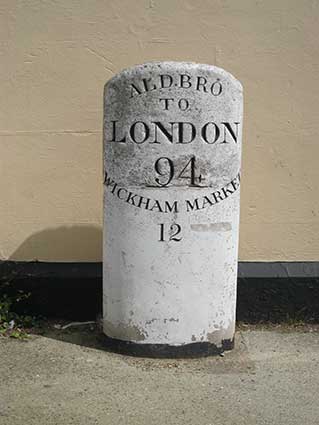 2015 images
The milepost has a curved top and is well preserved with its use of the truncated spelling, common at one time: 'Aldeborough':

It stands close to the White Hart Inn.  There is another milestone embedded in the wall of Milestone House on the A1094. More mileposts/milestones here.

Crespigney Cottages and The Old Custom House, Main Street
And while we're down this end of the Main Street: 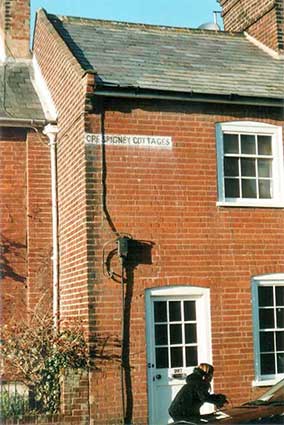 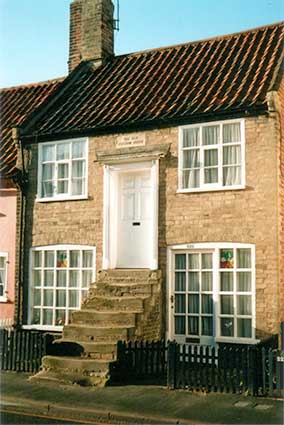 2005 images
'Crespigney Cottages' and 'The Old Custom House', the latter one of the famous houses in Aldeburgh, its front door nearly on the first storey accessed by a worn stone staircase.

Let's take a walk back up the shingle towards Thorpeness and discover Maggi Hambling's sculpture commemorating Britten, way up the beach, as it has lettering cut into it.

2017 images
This large Victorian building, which apprently used to be a convent school, is tucked behind the more visible Wentworth Hotel on the north, coastal part of Aldeburgh (not far from the Scallop sculpture on the beach). Since narrow Wentworth Road was made one-way, even fewer people drive past it. The house boasts a variety of styles, carved details and material colours and, most noticeably, a wing to the south which rises to a balustraded roof terrace at first floor level.

It was only in 2017 that we noticed the faint lettering in a cartouche above the southern entrance:

in the most vestigial of lettering – a true ghost sign. Presumably the school had its own museum in this wing of the house; when it ceased to be, the incised lettering was filled in with plaster or render. 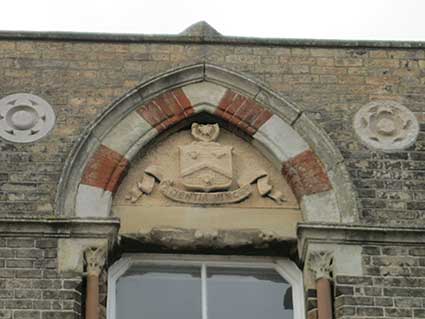 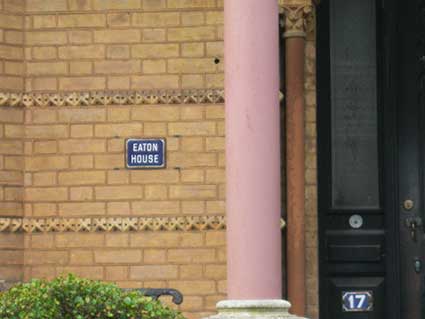 The crest high above the central front door has a scroll bearing the incised lettering:

(the initial letter 'P' is difficult to make out). The Latin quotation translates as: 'By patience you will conquer'; perhaps a suitable motto for a school. 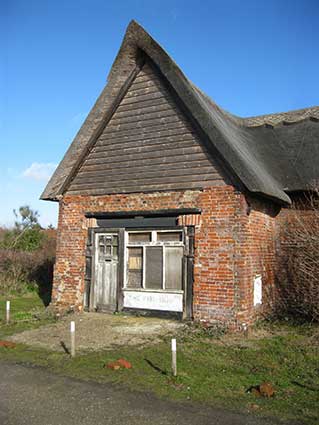 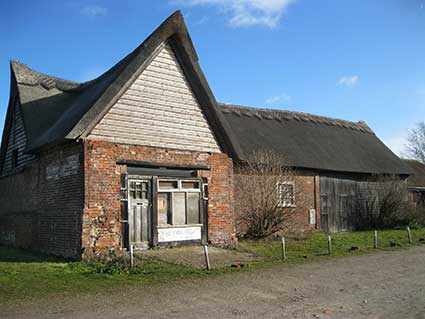 2019 images
This rather handsome, slightly run-down thatched barn is situated on Old Homes Road, the lane leading down from Thorpeness Church (now a dwelling). The small shop-front beneath the gable was inserted in the brickwork at some stage and run as:

signed in vernacular capitals )note the difference in the 'S's) under the window. 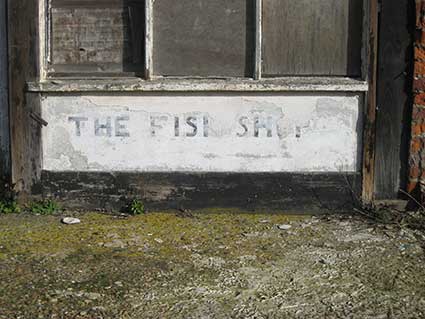 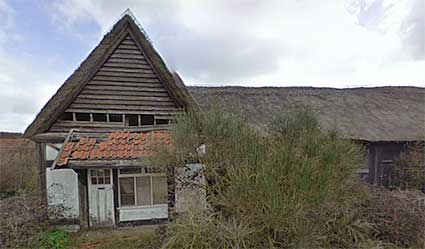 The photograph from 2010 (above) indicates that the building was in a much poorer state and has had considerable refurbishment since. Surely barn conversion (to a dwelling) is only a matter of time? 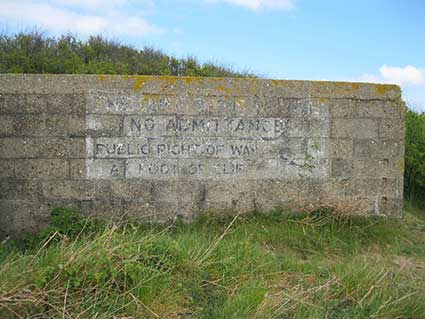 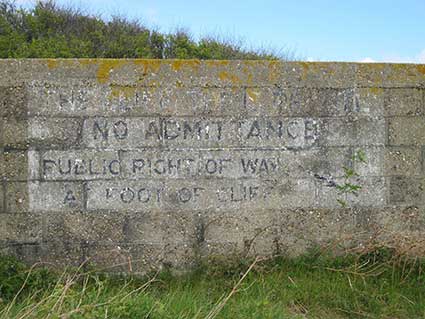 2015 images
North End Avenue stretches along the sand cliffs above Thorpness and the side of a World War II gun emplacement has been utilised as a public notice:

As the public footpath on the beach continues northwards, one passes the 'Ness' – today just a bend in the coast. The cliffs along this stretch of coast are soft and prone to collapse in stormy high tides.