The Duke Of York 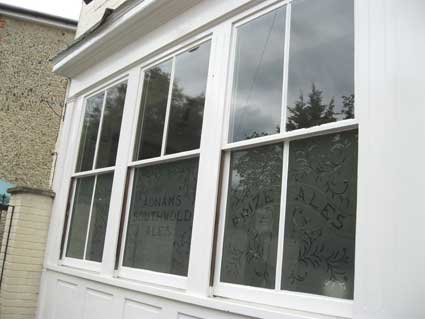 2012 images
The Duke Of York public house stands at the junction of Woodbridge Road and Warwick Road. It was always 'The Duke Of York' until the Southwold brewery Adnams bought it and, perhaps inappropriately, inserted the 'Grand Old' into the name. They comissioned a signwriter to paint the new name on the rendered wall which faces down Woodbridge Road (sadly we didn't record this, considering it to be ersatz 'historic' lettering; now it's gone it qualifies for this website...). The other loss was on the frontage of the pub. To the left of the public bar – leading to a corridor with its own small section of bar-counter for off-sales – was a street door with the frosted lettering 'JUGS' on it. This was lost during the Adnams facelift. However, they did install engraved windows with curlicues and lettering. 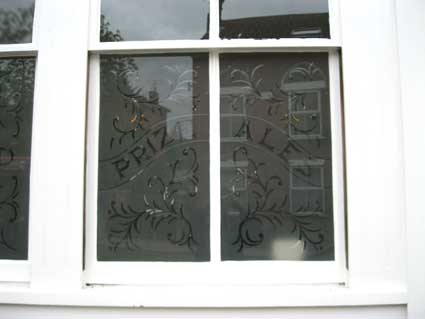 In the three windows (from left to right) we read:

While recording this example, we were informed by the present manager (spring 2012) that the glass engraver came down and worked on the windows in situ. This seems a little hard to believe; also, were frosted glass panes installed in the frames and the decoration and lettering cut from the back (interior) by the engraver's wheel? Any experts on glass engraving, please advise. However it was done, it is a tribute to a dying art. 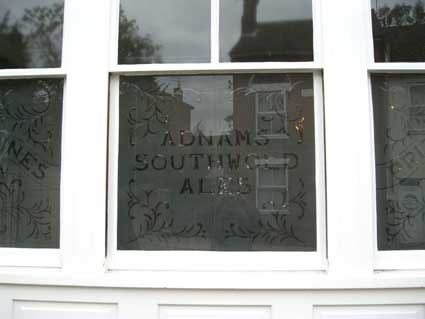 These photographs demonstrate the fugitive nature of this form of lettering. The characters and decoration are largely clear glass appearing through a frosted field in the lower portion of each window. On a fairly dull day it is a difficult job to photograph them. 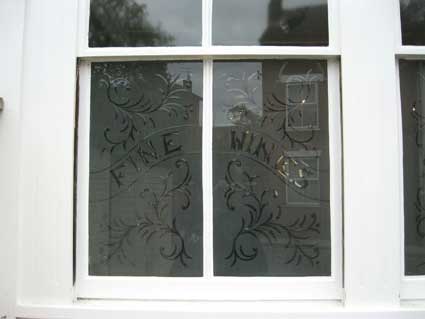 The enhancements placed together in the same image show the engravings better (along with three little reflections of the photographer). This group only proves the importance of the play of light and angle of viewing of  decorated windows. Incidentally, the building reflected in the pub window is the former post office with its defunct post box. Only a hundred yards down the road is the curious 'Vicarage' lettering; Harmony Square and Connaught Buildings also appear on that page.

Our customary standby for public house information, Suffolk CAMRA, (see Links) tells us that The Duke Of York is also listed at Albion Hill (which runs up to 'Albion Mills', the site of the demolished pub, now a Bristo's showroom).

"Reputedly the Duke slept here and took wine whilst his men were billetted locally. A report in the Ipswich Journal on Aug 7, 1869 when Hannah Parsons (widow) was landlady states: 'William Hurrell, 29, a labourer was tried for stealing two pillows and other articles from Mrs Parsons, he was found guilty and received 6 months jail.' Laura Crapnell married George Hawkins and were here in 1901 (this information from David Clow). Before 1995 it was called Duke of York and comprised of a two bar pub with a separate small off-sales area accessed via a LH door from front of building (see older photos). A wooden screen then separated the off-sales from the public bar.
Note: There have been many Dukes of York - the song (The Grand Old Duke of York) usually refers to Frederick Augustus (1763-1827), second son of George III. He commanded the English army in Flanders in 1794-95. But the song misrepresents the facts as he was only 31, had 30,000 men and had no hills close to where he was fighting. Some claim it could be a reference to Woodbridge Rd in Ipswich?". Although the date of the building is not clear, the earliest recorded landlord is in 1823.

For an 1883 map of the pub's location (and the site of 'Bellevue House' on the hill behind it) see our Russell Villas page.
See also our Warwick Road page for maps of the location.

See our Pubs & Off-licences page for more examples of hostelry lettering.  Also Fore Street for a frosted former chemist's door and a frosted glass door from The Old Bell near Stoke bridge. Stained glass pub lettering could once be found on The Golden Key until they turned it into a supermarket.