In 2012 this slightly puzzling piece of lettering stood to the right of the busy entrance to Woodbridge Road Medical Centre, at 165-167 Woodbridge Road. 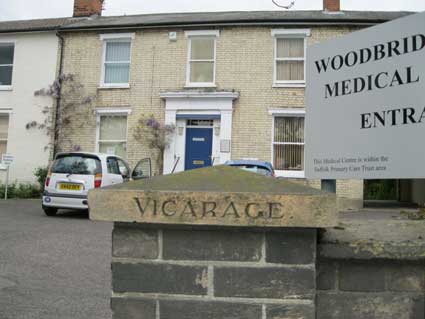 is spelt out on the capstone (the other one is missing from the brick pillar) in attractive lettering, heightened with black paint. Is this the original vicarage for St Helen's Church in St Helen's Street, we wondered: the entrance to the associated school can be found a few hundred yard down Woodbridge Road from here? However, St Helen's priest is a Rector who presumably would live in a rectory adjacent to the church. So this property beloged to the Vicar of what? [See these updates for an explanation. Also our Church of St Helen page.]

[UPDATE 16.3.2014: the 1902 map of the area illustrated on our Palmerston Road page clearly shows St Helen's Church on Spring Road and behind it, before St Helens School was built, undeveloped land behind the graveyard rising up the hill to a large 'Rectory' fronting Woodbridge Road. This would have stood on the site of the present school entrance. So the vicarage in question does not relate to this church. For yet another story about a St Helen's Church 'parsonage', see our Warwick Road page.]
[UPDATE 16.2.2015: 'I may have info on the Vicarage, now health centre. Rev. Clement Henry Lakin Wright, possibly lived there in 1935. He uses an address in Woodbridge Road in the document below. Clement was an army chaplain and spent several years in India before returning to Suffolk. His son, also a clergyman (there are several generations of clergy in this family) Horace, used it as his UK address when travelling to China to be a missionary about 1935, too. His sister Gertrude remained unmarried and also lived there after the deaths of both her father and brother. The vicarage at this time does not seem to be linked to a church – it may be a house owned by the church and used for retiring clergymen and their families and just called a vicarage for that reason. [https://archive.org/stream/proceedingssuff03histgoog] If you google Clement, you will get quite a bit of info about him. Suzanne Kirk.' Many thanks to Suzanne for information on the 'Vicarage' lettering. Rev. Clement Laken is listed in the Suffolk Institute of Archaeology and Natural History list of members, May 1933 as living at Granite House, Woodbridge Road.]
[UPDATE 18.3.2019: 'We've just moved into number 165 [Woodbridge Road], the old Doctor's surgery.  I noticed that 167 has one gate post with 'Vicarage' on it but you were unsure which church it was attribute to.  See below on an old map, it appears to be St Michael's! Best wishes, Maddie.  PS love the website!' Thanks, Maddie – we think that's very helpful, but poses some questions. Although the map is of uncertain date, the Church of St Michael in Upper Orwell Street wasn't built until the 1880s, so the map must be from that time or later...] 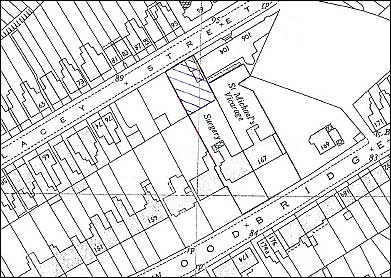 Undated map
It should be borne in mind that the date attributed to a map is usually that of publication; the data upon which the map is based is usually one to two years earlier than this.
Dating the map
1.   On the undated map (above), 'St Michael's Vicarage' is clearly labelled at no. 167; it looks as if the cart entrance accessing the rear garden was original – until recently it was used as an access to a patients' car park behind. The 2017/18 conversion back to dwellings has filled in this entry to form part of the building with a new front door. The doctor's 'Surgery' (no. 165, semi-detached with 167) is shown; it later spread into 167. Note that Harmony Square doesn't seem to exist at this time, although the shape of the site is there – See the following maps. 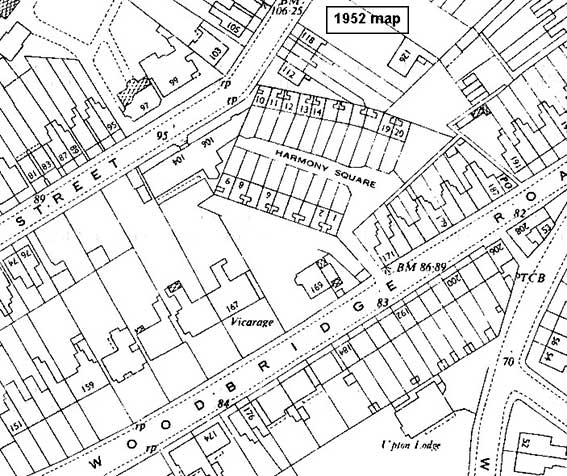 1952 map
2.   We now have a sequence of maps of this area dated 1952, 1968 and 1969. The first labels no. 167 as 'Vicarage'; the second and third have the full 'St Michael's Vicarage'. The dramatic change occurs between 1968 and 1969 when the easterly Whitfield King offices in Lacey Street are demolished and the former Harmony Square cottages are replaced by the Hanover Court flats. This accounts for the void in the Harmony Square footprint. The offices of the Whitfield King stamp business are described and illustrated on our Morpeth House page. 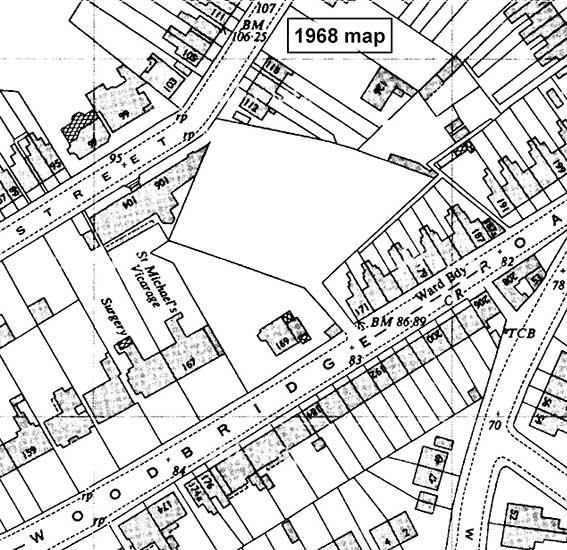 1968 map
3.   The 1969 map (below) clearly shows the layout of the present-day Hanover Court; the Whitfield King offices at 106 Lacey Street have been removed, presumably to facilitate vehicular access to the awkwardly-shaped sheltered housing site. 'St Michael's Vicarage' is still clearly labelled at this time, as is the next door 'Surgery'. When it ceased to be a vicarage, presumably the surgery next door bought no. 167 and spread its operations to both (linked) buildings, until the 21st century conversion back to dwellings. 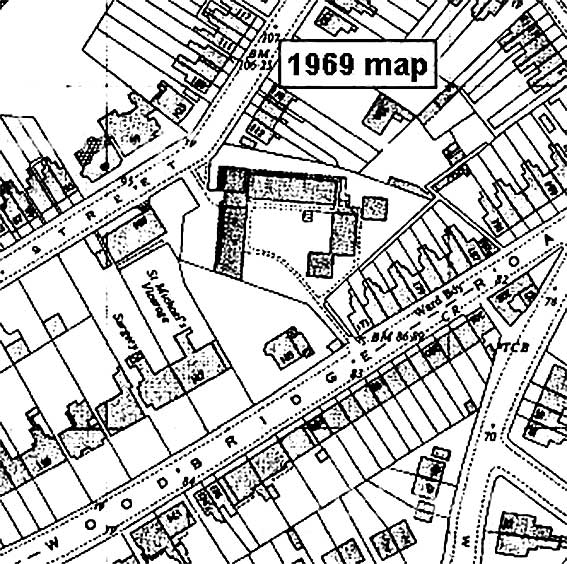 1969 map
4.   Harmony Square was built during the Napoleonic Wars (1803–1815) for military officers, as described below, and the Church of St Michael in Upper Orwell Street was not built until the 1880s.
5.   The Ipswich Society Local List (second edition 1985, see Reading list) describes both houses in Woodbridge Road as 'mid-19th century' (no. 165 as 'Doctor's Surgery'; no. 167 as a 'Private House'). So the 'Vicarage' ceased to fulfill that role at a date between 1969 and 1984.
6.   Sources state that one of the cottages in Harmony Square suffered bomb damage during the World War II but it was repaired (see our Warwick Road page), however the whole group of dwellings and the mission room were demolished in 1957 and flats, now called Hanover Square, were built on the site – see photographs of the entrance below. It appears from these maps that, following the demolition the site lay empty for about twelve years, before redevelopment.
7.   Given that there was not another Church of St Michael in Ipswich – according to Simon Knott's Suffolk Churches site (see Links) – the 'Vicarage'-lettered capstone is a 20th century addition (it certainly looks more modern than its heavier Victorian counterparts). That would fit in better with Suzanne's information (see the update 16.2.2015 above) about a vicar living at no. 167 in 1933 and with the later date of the map.
8.   Why build a vicarage about a mile away from the church? Our imaginary vicarage nestling a hundred yards away from the village church doesn't hold true in a large town. For example, Rev. J.T. Nottidge, incumbent of St Clement Church, not only had Holy Trinity Church built in Back Hamlet at his own expense, his Trinity Vicarage was a long way up Bishops Hill in 'Vicarage Road', later an extension to Rosehill Road (as shown on our Rosehill case study page): a much more salubrious location. 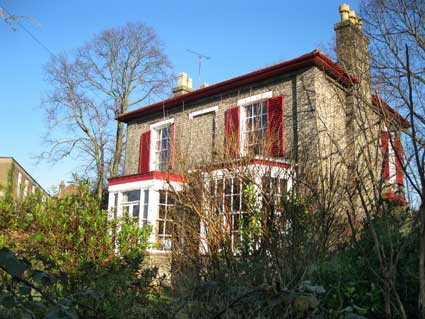 2014 images
Next door to the 'Vicarage' lettering is St John's Lodge (above) which is turned sideways on to Woodbridge Road. The Ipswich Society Local List (second edition 1985) lists the house as 'mid-19th century', like its neighbours at 165 and 167 . The 1883 map (thanks to John Norman) below shows its position with, beside it, the entry lane into Harmony Square set at an odd angle behind Connaught Buildings – this terrace of houses with steps up to the front doors is still there, with over number 179 Woodbridge Road: 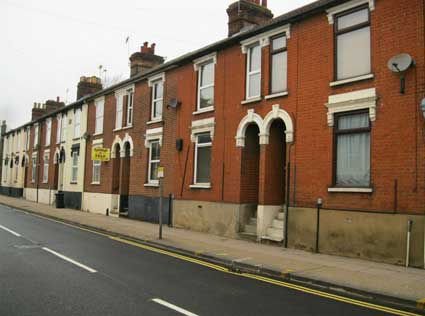 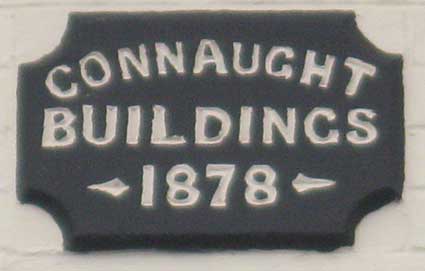 2014 images
... with, ten years later a row of six houses, set back from the road: 'FARRINGDON VILLAS 1888' is above number 193 Woodbridge Road. (Connaught House, a few doors away, is dated a year earlier and a has redundant wall postal box.) 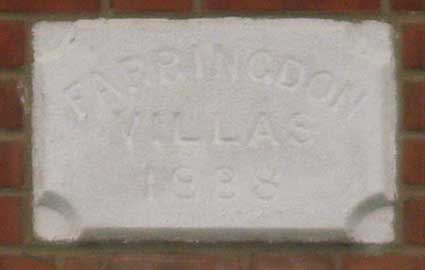 On the pavement close to Farringdon Villas is an Ipswich Corporation Electricty Dept. Mains Disconnecting Box set into the pavement; see our Street furniture page. 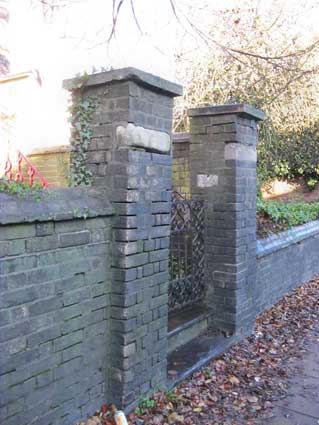 The brick gate posts from Woodbridge Road to St John's Lodge have stone insets bearing recessed gothic lettering infilled with red and/or black on the right. 'St John's' to the left is much weathered, hardly visible except in raking sunlight or, we noticed, by the street light at night. 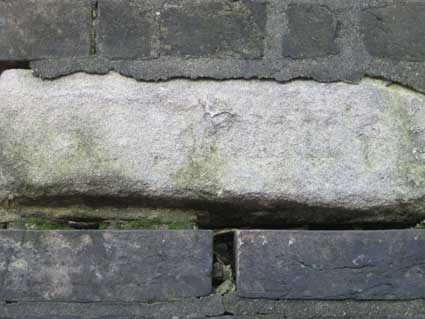 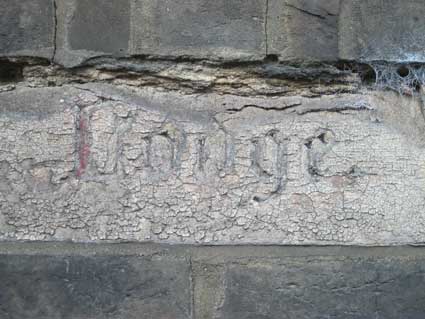 Is it possible that St John's Lodge on Woodbridge Road relates to St John the Baptist Church a mile or more up the road on Cauldwell Hall Road, which in turn gives its name, 'St John's', to the area still known to some as 'California'?

1884 map
The detail from the 1884 map shows the original Church of St John – later used as a church hall once the much larger redbrick church was built to the north (on the site of a 'Smithy') and demolished in recent years. Gardens above this lead up to the Vicarage of St John's, which still stands today, although much extended, as a care home, fronting Woodbridge Road:

434 Woodbridge Road
We learn from Peter Higginbotham's Children's homes website (see Links, under 'Specialist subject areas') that this building was once Friar's House Home for Girls (moved in 1926 from The Friar's Road Home for Friendless Girls (1886) in Princes Street. In 1952, the home was taken over by The Children's Society (formerly the Waifs and Strays Society) and finally closed in 1972.
The 'P.H.' on the corner is The Golden Key, now converted into a grocery store. Between the two is the modern petrol station and car wash. While Nelson Road is present, it is still sparsely developed. Gordon Road which leads down to the Roundwood Bowling Green (behind the Vicarage) is yet to be built. 'Cauldwell House', the larger building to the left of the Vicarage, no longer exists and Roundwood shops now line Woodbridge Road. 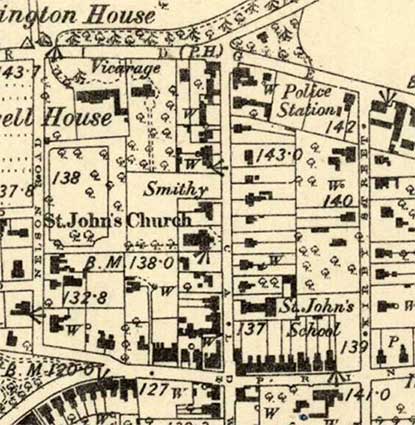 Harmony Square / Hanover Court
During the preparations for the Napoleonic Wars (1803–1815) a militia camp was established on the level ground up Albion Hill (see Parade Field Terrace) with the officers’ quarters in Harmony Square opposite the Duke of York public house. Harmony Square consisted of two rows of single bedroom cottages facing each other across an open courtyard: eleven on one side and nine on the other with a wedge-shaped Mission Room at the eastern end, hard up against the back yards of Connaught Buildings (see above). One of these cottages suffered bomb damage during the Second World War but it was repaired, however the whole complex was demolished in 1957 and flats, now called Hanover Square, were built on the site.
For the story of a large WWII bomb hitting Harmony Square and a second in the garden of nearby Derby Lodge, see our Warwick Road page. Luckily, neither exploded. 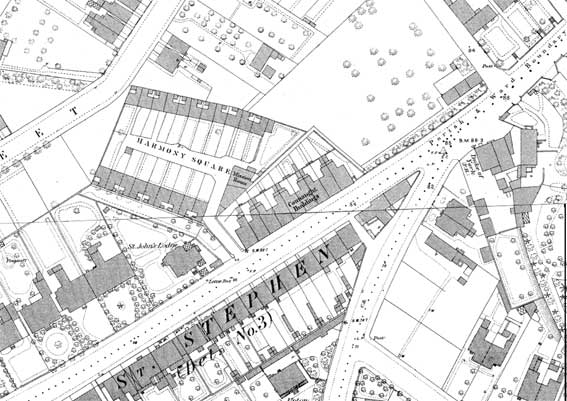 1883 map
The narrow passage to Harmony Square from Woodbridge Road where the original gate posts are still in place: 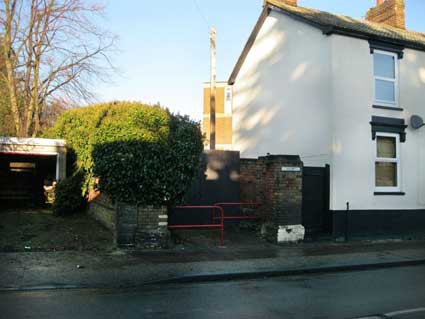 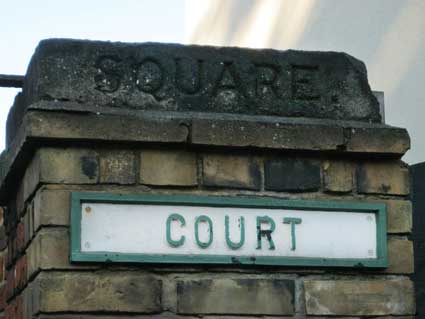 The mass of ivy to the left drowns the lettering and most of the post, but it was visible fifteen years ago! The original name is carved into the stone capstones, replete with serifs and full stop. The later name is in relief, condensed capitals on painted metal plates screwed to the brickwork. (One day they'll clear it all away...)
HARMONY restored
[UPDATE February 2019: after years of waiting we noticed a trailer here in late January 2019 piled high with ivy cuttings. At last we can see the left-hand pillar featuring both a capstone with 'HARMONY' carved in it (much degraded, so the enhancement makes it clear) and the later metal nameplate: 'HANOVER' – also affected by the ivy tendrils.] 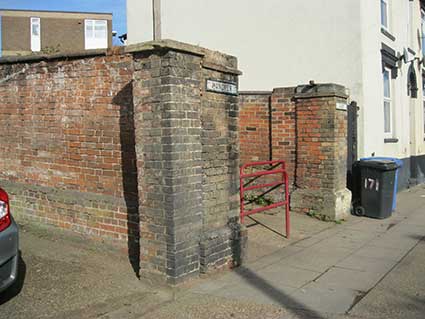 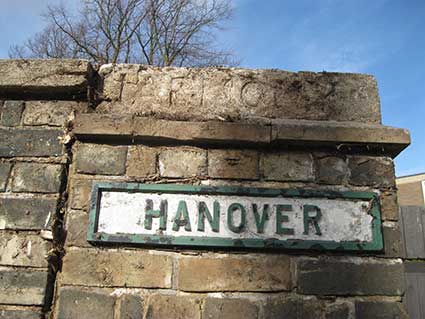 2019 images
Below: 'HARMONY' is readable in this enhanced image with the metal nameplate 'HANOVER' beneath. 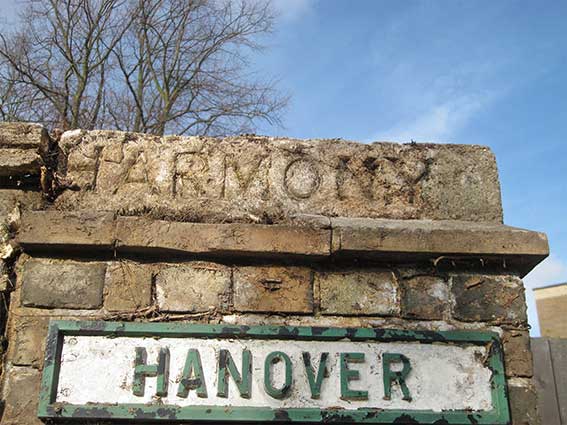 It is of passing interest that a 'Letter box' is shown outside St John's Lodge on the 1883 map. It certainly is not there now. However, in 1887, thus not shown on the map above, Connaught House was built a little way up from Connaught Buildings on the corner with North Hill Road. For many years it was a sub-post office and it still bears a defunct wall box shown on our Street furniture page. 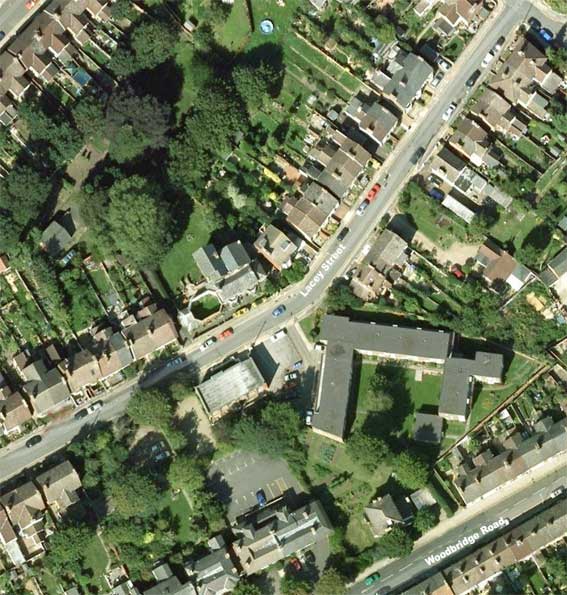