Ronald 'Carl' Giles worked as a cartoonist for Express Group Newspapers from the 2nd World War to 1992. The Grandma statue by sculptor Miles Robinson is based on the characters in Carl Giles's cartoons from the Daily Express: Grandma, Aunt Vera with her constantly runny nose and alarmingly thin ankles, the twins in their matching bobble hats and the dog (what no Larry? – although his frizz of hair would be difficult to sculpt). The only problem with sculpted figures who wear spectacles is that they look as if they are wearing 1st World War flying goggles.

The group is now sits on a lettered granite pedestal in the town centre. It started life in 1993 sited at pavement level on the opposite side of the road and was vanadalised in the early years. Giles Circus is the name that has been given to the confluence of Princes Street, Queen Street and Buttermarket. The refurbishements in 2010 to the paving and the installation of the plinth and resiting of the statue seemed to take ages to complete. Although born in Islington Giles worked in the town all his adult life, living for years in Witnesham. 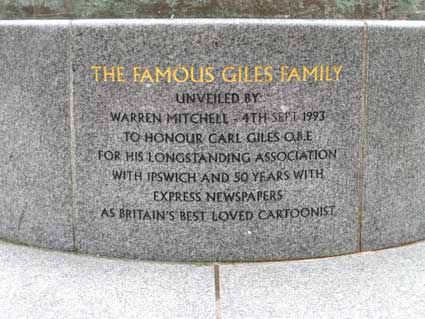 Although the upper granite cylinder has been slightly vandalised with the word 'SEPT.' less distinct, the inscription reads: 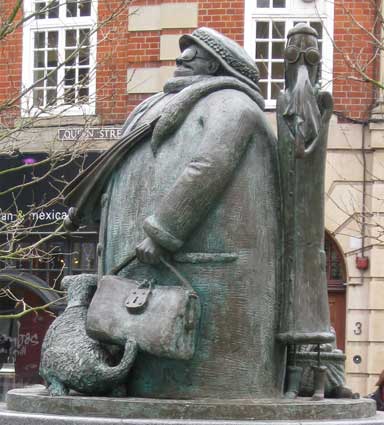 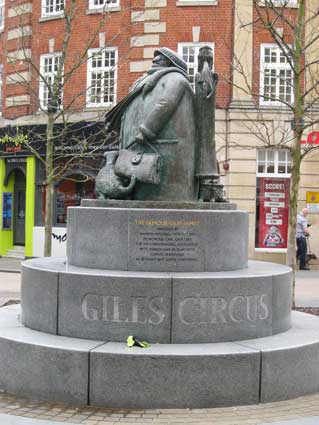 Giles early career included a spell in 1935/6 as an animator for Alexander Korda. Following a serious motorcycle accident which fractured his skull and robbed him of the sight of one eye and damage to the hearing in one ear, he animated the Steve character (a cartoon horse) for Roland Davis in Ipswich. Giles's politics were left rather than right. When Lord Beaverbrook persuaded him to join the Express Group during the war, Giles made it very clear that his politics would not change. The Giles family became emblematic if the British Everyman, surviving adversity and the internal tensions of family life. Giles' genius is in not only creating an absorbing cartoon world for his characters to inhabit, plus the topical idea for that day's cartoon, but also in his draughtsmanship and use of black white and grey tone for reproduction on the rather poor newsprint. Nobody has drawn (or, rather, not drawn) thick, lying snow and footprints like Giles and his perspectives are more than just 'correct'. 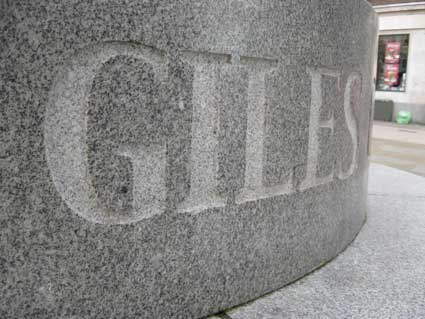 Some Giles cartoons feature Ipswich and Suffolk locations as mentioned on our Cornhill and St Lawrence Church pages. In addition he drew many pubs, putting them into unique cartoons to hang on the bar wall. There may be some surviving in pubs which haven't been gastro-ised. The Carl Giles Trust Collection is held by the University of Kent on behalf of Express Group Newspapers. It contains around 6,500 original artworks for cartoons which you can look at online. 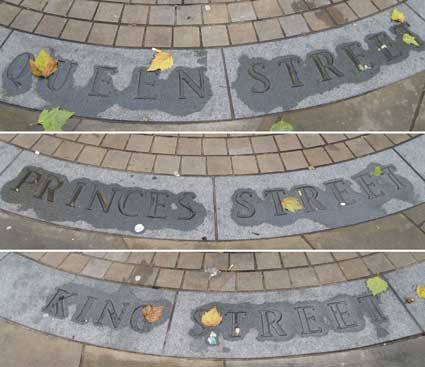 appear, appropriately positioned, carved into a ring of grey stone around the pedestal. No doubt there is 'Butter Market', too.

Where is Gran looking?
The Giles statue is positioned so that Grandma is looking up at the studio window of the former East Suffolk House where Giles used to work, above what is now a coffee shop. 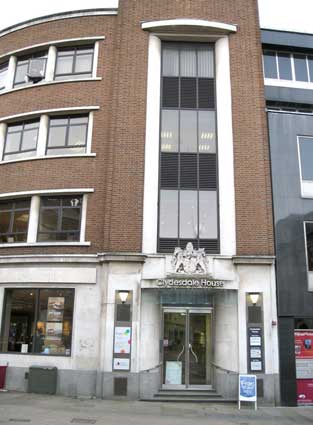 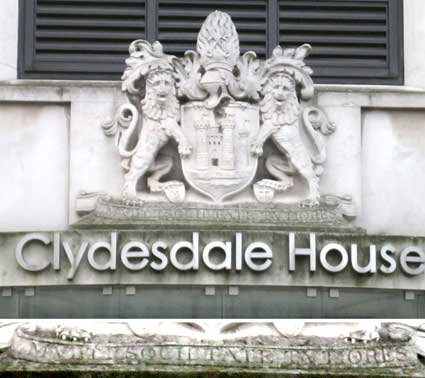 The building has been renamed Clydesdale House and bears a traditional stone crest and motto above the door of this modernist style building. The Latin inscription on the scroll (shown enlarged at the bottom of our image) is problematical. We decipher it as:

which doesn't mean all that much. 'Mvlti' (Multi) is many 'Societate' should probably be 'Societatis' meaning societies; the last two words defeat us.
[UPDATE 26.9.2014: Tim Leggett has sent a 'ghost clock' on this building. "There is a lost clock in Giles Circus which can still be seen if you look for it." His photographs show 'before', c.1978, and 'after', 2014, views of East Suffolk House; why did a committee decide to destroy and patch-point this feature, rather than (a) just leaving it alone, or (b) repairing it so that it became once again something useful to the public (see the Stopped clocks website on our  Links page)? See also on the Links page Tim's website of 'befores and afters' around Ipswich: The Ipswich Society Comparison Photos. Thanks to him for spotting this.] 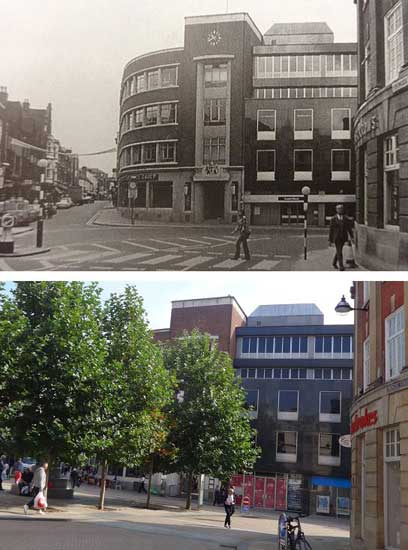 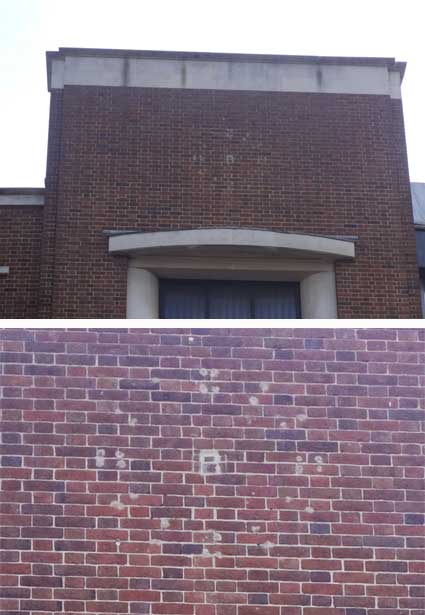 The Queen's Hotel, 7(?)-11 Queen Street
Below is a photograph of The Queen's Hotel, from which the street gets its name, in c.1970 (from the Ipswich Society's Image Archive, see Links). The board to the upper left of the hotel facade, next to the word 'Quality' appears to have dropped off by this date – presumably it carried the words 'Tolly Cobbold'. In the centre, painted on the rendering is:

and beneath that, above the first floor windows:

and just in front of that , to the left, is the street nameplate 'QUEEN STREET' on a stripey pole. Clydesdale House with its crest is visible to the left, with Barclays Bank at near right and Oxborrow Insurance at near right. The hotel closed on Christmas Eve, 1971 and was demolished in 1972 to make way for the Britannia Building Society block, standing empty in 2017.
The Ipswich Jornal in 1895 advertised: 'Queen's Street Restaurant, Ipswich, Wines and Spirits, Ales and Stout on draught or in Bottle; Soup, fish, entrées, poultry, joints, daily; Balls, Banquets, and wedding breakfasts supplied throughout in first class style; Breakfast, Luncheons, Teas, and Suppers; Accommodation for Commercial gentlemen. James Hardwick, proprietor.' [Information from the Suffolk CAMRA site, see Links.] 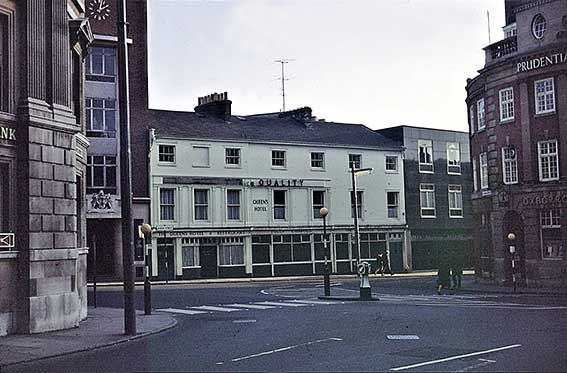 1970 image courtesy The Ipswich Society
The view is from the top of Princes Street when traffic ruled and pavements were narrow. Today the Giles statue occupies the near foreground with trees and pedestrianised paving in evidence.

The Falcon
On either side of Princes Street are King Street, named after the King's Head and Queen Street, named after The Queen's Hotel. At the southern end of Queen Street is The Falcon, after which, of course, Falcon Street is named. 'The Faulcon Inn' is listed as early as 1743 probably predates this. As is the way with so many town centre public houses, it has had a patchy history in recent years. The photograph below from 2018 shows it refurbished and shaking off the 'Bowman's' name which it bore for a few years. The signs are a bit brash and there is no traditional pub sign, but it's good to have the name reinstated.
Incidentally, the photograph of The Falcon was taken from the opposite corner of the cross roads which bears the street nameplate 'ST. NICHOLAS STREET' with the unnecessary use of a full stop after 'ST'. This timber-framed building, for many years home to Ajax Domestic Spares and now an estate agency, is older than its neighbours.

The 'G' & 'T'
Just across Buttermarket from here is a building with a large wrought iron:

2013 images
1 Buttermarket, the premises of Fenn Wright estate agents. It's too much to imagine that this 'G' stands for 'Giles'...
[UPDATE 9.1.2018: An advertisement dating from about 1960 shows the building – then listed as '1 Old Butter Market' occupied by Garrod Turner & Son, Land Agents & Auctioneers. The 'G' in the balcony iron-work must surely have stood for Garrod, which is blended into a 'T', for Turner, to form a monogram – not particularly obvious at a glance.] 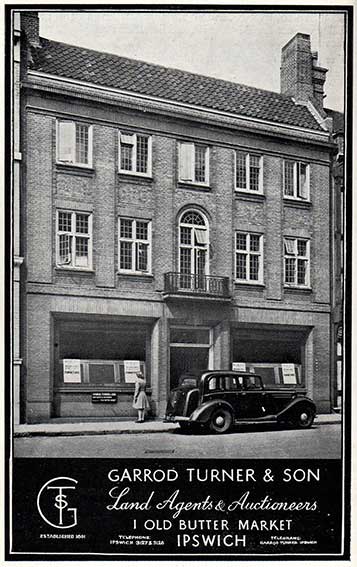 The Giles statue is only a gourmet sausage's throw away from Parr's Bank (formerly Chelsea Building Society, now Ipswich Building Society) with its fine lettering and dated weather vane.