Cobbold's Ales & Spirits
The most vestigial of Ipswich vestigial lettering 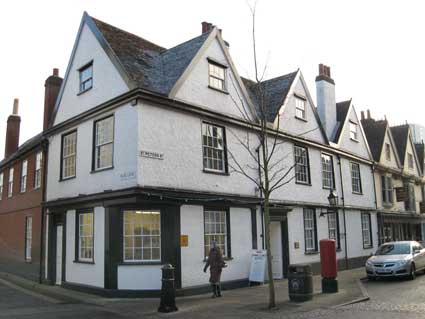 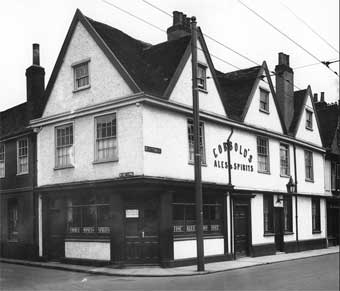 It is fascinating to see the two views of this building in St Peters Street (2013 to the left, early 20th century? to the right), but the period photograph was the last item on this page to be discovered. The building is largely unchanged today, the corner pub door now a window, even the street lamp on its bracket is still there above a smaller door which is blocked up today. The original ground-floor windows feature the lettering: 'Choice Wines & Spirits' on Rose Lane; 'Fine Ales ...? Stout' on St Peters Street.

'Rose House'
[UPDATE 7.4.2020: In the first photograph (above) you can also see today's Thomas Wolsey public house shown in more detail on our Wolsey's College to the right at number 9 St Peters Street – a more recent hostelry in a 16th/17th century building. Interestingly, Chris Sedlak tells us that: 'The former inn is on the corner, as you know, and to its south is a slightly older building (late 1500s / very early 1600s vs. early-to-mid 1600s for the inn structure), the Rose House, which was a succession of pubs in the 20th and now 21st Centuries... My guess is that the Rose Inn (namesake of the lane) was named after the slightly older and adjacent Rose House.']
'Rose Lane'
It is often a matter of debate as to whether a street was named after an inn or vice versa. Chris Sedlak, quoted above, posits the theory that the somewhat earlier Rose House might have been named after early occupants, the Rose family; this gave the name to the inn on the corner and the lane took the name in turn, having once been known as Curson Lane (as shown on Ogilby's map, 1674) as it marks the southern boundary of Lord Curson's house, as detailed on the Wolsey's College page.
We had assumed that the Tudor Roses, seen in the plaster mouldings of Rose House would have been in tribute to the Tudor dynasty.
The Tudor rose (sometimes called the Union rose) is the traditional floral heraldic emblem of England and takes its name and origins from the House of Tudor, which united the House of Lancaster and the House of York. The Tudor rose consists of five white inner petals, representing the House of York, and five red outer petals to represent the House of Lancaster and its superiority to the House of York. It is a symbol to show the battle of the roses. When Henry VII ('Henry Tudor', 1457-1509) took the crown of England from Richard III in battle (1485), he brought the end of the retrospectively dubbed 'Wars of the Roses' between the House of Lancaster (one monarch of which had sometimes used the badge of a red or gold rose) and the House of York (which had more recently used a white rose badge). Henry's father was Edmund Tudor, and his mother was Margaret Beaufort from the House of Lancaster. In January 1486 Henry Tudor married Elizabeth of York to bring all factions together. (In battle, Richard III fought under the banner of the boar, and Henry under the banner of the dragon of his native Wales.) The white rose versus red rose juxtaposition was Henry's invention.

Listed buildings
The Grade II Listing text reads: '5-7 St Peters Street. A C17 timber-framed and plastered house with 3 jettied gables on front, now roughcast. Altered in the C18 and later. 2 storeys and attics. 4 window range on St Peter's Street and 2 window range on Rose Lane, double-hung sashes with glazing bars, in flush cased frames. The attics are lit by windows in the gables. The ground storey has C20 corner shop windows and a 6-panel door with a moulded wood architrave and cornice. A moulded wood string course runs above the ground storey windows. Roofs tiled. An early C19 red brick wing extends to the east on Rose Lane. 2 storeys. 4 window range (1st storey), one window range (ground storey), double-hung sashes with glazing bars in flush cased frames. A raised brick band runs between the storeys. Roof tiled.
Nos 5 to 13 (odd), No 13A, Nos 15 to 33 (odd), No 33A and Nos 35 to 39 (odd) form a group.' 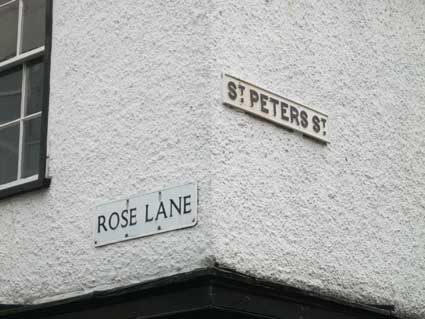 This example of historic lettering is passed by hundreds every day, but unless the sun is in the right direction and the observer is particularly acute, it's easily missed. We are indebted to the eagle eye of Simon Knott (see Links for Simon's Suffolk Churches) for this lettering. The location is between the first storey windows, behind the tree (photograph above left). This is the former Rose Hotel at 5-7 St Peters Street which closed in 1969. It gives Rose Lane its name. It is a Grade 2 listed building but was partly demolished in 1903 for road-widening. The remaining parts are now used as offices. The building dates from the 17th century. It was one of Ipswich's most ancient inns; one of only 24 listed on a town assessment of 1689. The building was identified via the Lost Pubs Project website with additional information from Suffolk CAMRA (see Links for both). 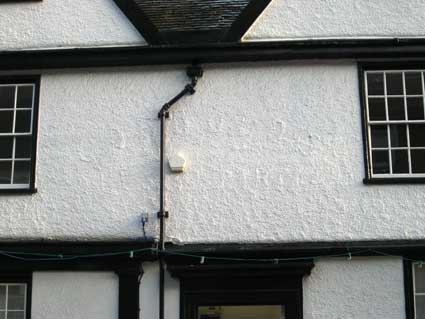 2013 images
It is the ultimate vestigial lettering, a ghost of a defunct brewery on a defunct hotel's wall: 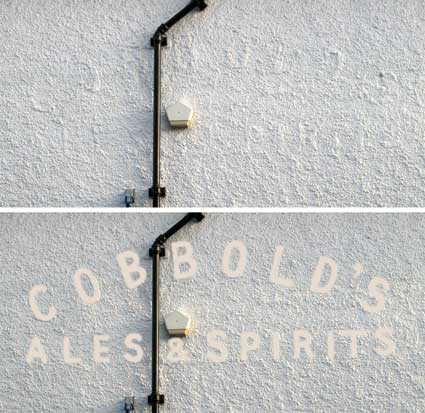 This retouched image reveals the sign. There is a familiarity to those who have noticed the ghostly lettering on former public house The Globe in St George's Street, which has been similarly smothered (see also the Horse and Groom lettering in Woodbridge Road). One wonders if the rough-cast rendering was worked over relief letters – or even thickened painted letters – to obliterate them. It's amazing just how many buildings in Ipswich are former pubs, inns or taverns. See also the Tattingstone White Horse with the same ghost sign.

We found this account by Ipswichian, Linda Erith:
“I remember going to the Hippodrome with my mother as a young child in the early fifties. The acts were the usual variety type but nude scenes were starting to be a feature. On one occasion my sister Rose came with us and was invited by the comic to take part in a sketch. She had to say ‘I wonder where my husband is tonight’ and my mother yelled out, ‘He’s at the Ufford Crown’. It got a big laugh.
We used to go the Cardinal Cafe first, which was opposite, and I would have a Kit-E-Cola to drink, complete with a picture of a kitten on the label. This was probably manufactured locally as there was still rationing and Coca-Cola was rarely seen in the shops. Across from the theatre in St Peter’s Street was the Rose pub, which had stables and cages etc in the yard at the back to accommodate all the animals and birds that were a regular feature of variety acts.  Although the Hippodrome has been demolished the cafe and pub building are still there.” 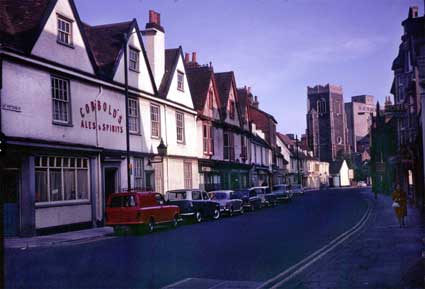 Photograph courtesy The Ipswich Society
The above view down St Peters Street comes from the excellent Ipswich Society Flickr collection (see Links); it clearly shows the Cobbold's relief lettering, also that it was painted red. 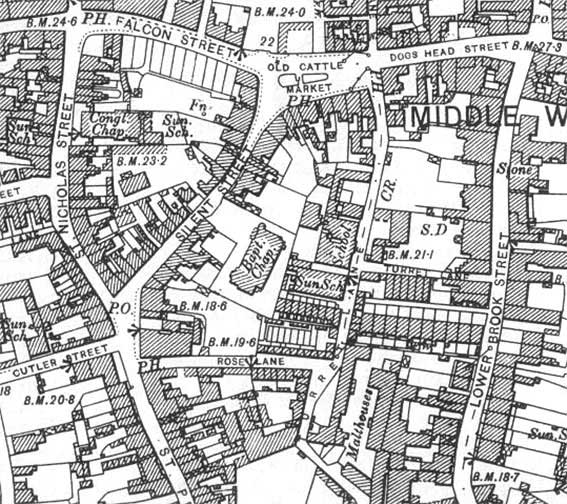 1902 map
The above detail from a 1902 map of Ipswich shows, at its centre, the Turret Green Baptist Church (demolished in the 1970s) with the neighbouring Sunday School fronting Turret Lane (which still exists as business premises). A second school occupies the site across a passageway to the north (where the modern block Adelphi House*** now stands); also a Congregational Chapel is set back from St Nicholas Street with a Sunday School behind it – the site of a Job Centre in 2017. The number of educational establishments in the town in the early 20th century indicates the number of people actually residing in the town centre; note, for example, the row of small terraced houses south of the Turret Green Sunday School. Below that is Rose Lane with the Rose Hotel clearly marked 'P.H.' on the corner with St Peters Street. On the other side of St Peters Street, on the south corner of Cutler Street, is The Sailors Rest with a strip of land in front of it (and no overweaning St Vincent House block in behind it). This would explain how, during road-widening of this part of the street, the Sailors Rest survived.
***Adelphi Place was a terrace of ten houses, built in the 1840s, that ran between Lower Brook Street and Turret Lane, opposite what is now Haven House. The terrace appears to have been accessed by a lane running parallel and south of the east-west part of Turret Lane. The terrace faced north with uninterrupted views over the gardens that were, eventually, to become the county bus station. There was an unusually high number of notable people that lived in the terrace: in chronological order of their residency they are drainage engineer, John Fowler; painter. Miss Kate Elizabeth Tickner; surgeon and president of the British Medical Association, Robert Martin; and decorated World War I soldier, Sam Harvey VC. Adelphi Place was demolished in the early 1960s and it and a neighbouring plot is now occupied by modern 'Baltic-style' residential accomodation. [Information from John Norman's Ipswich icons column in the Ipswich Star.]

Thomas Cobbold founded his Harwich Brewery in 1723. This was 134 years before it merged with the Tollemache Breweries Ltd to become 'Tolly Cobbold' by which time it was brewing beers on Cliff Quay Brewery. Cobbold's made the move from Harwich to Ipswich to take advantage of the natural spring waters which fed the pools in the Cobbold family parkland, now Holywells Park. The brewery itself has a fascinating history including a working steam engine used to pump the waters to the top of the brewery building. So this lettering is pre-1957. 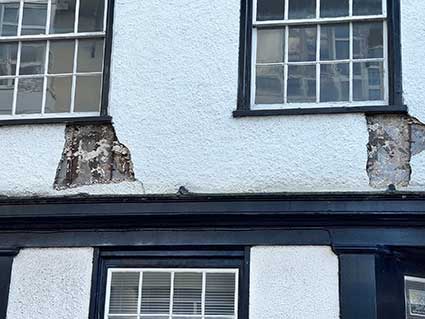 2022 image courtesy Darrell Chalkley
The neglected state of The Rose Hotel building has led to the textured render dropping off on the Rose Lane elevation. The block capitals are 'R' (probably part of the 'O') and 'N'. Would this have read 'ROSE INN'? The spacing would suggest it.


This building is just across the road from The Sailor's Rest, a few yards down from the Wolsey statue and Curson Lodge.
Another recently noticed vestige can be found on the side of the Horse & Groom in Woodbridge Road. See also the Pubs & Off-licences page and the Tolly Cobbold House & Brewery pages. See our Vestiges page for more traces of old trade lettering.