Some call this the "former Sailors' Rest public house" at 8 St Peters Street, Ipswich, however, the references on the web are more to a café for seamen. Neither Suffolk CAMRA, nor the Lost Pubs Project (see Links) list it as a pub.
It is Listed Grade I. This fine building was saved from demolition in 1970. On the day of the inquiry, two committee members of the Ipswich Society (see Links) jumped up and down on the floors to demonstrate that, contrary to what had been alleged, the building was not on the point of falling down.

The 'CUTLER ST.' cast iron sign with its black relief outline is in a pleasingly aged and distressed state in 2013. Other examples of this design/material can be found in Parliament Road, Upper Orwell Courts, Northgate Street and Lloyds Avenue. From White's Directory of Suffolk 1855: "William Cutler, in 1620, left £100 to be laid out in land, of the yearly value of £6, to be divided among three poor persons. The corporation laid out this legacy in the purchase of a meadow, which they have added to the Handford Hall Farm, out of which they pay the annuity of £6." See also Street name derivations. 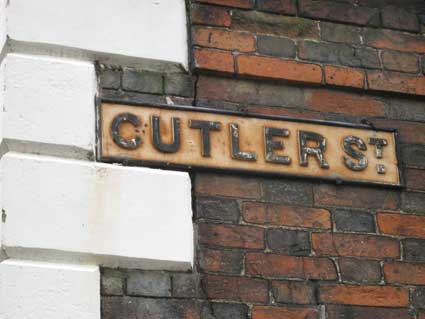 2013 images
The British Listed Building (see Links) text: 'A fine late C17-early C18 red brick house with stucco quoins, a plinth and a fine carved wood modillioned eaves cornice. 2 storeys and attics. 7 windowrange, double-hung sashes with glazing bars, in flush cased frames, with flat rubbed brick arches and stucco projecting keystones. The centre part with the doorway and one window above breaks forward slightly and has narrow flanking windows. The centre window has a shaped soffit. The 1st storey windows have brick aprons. A stucco band runs between the storeys. A central 6-panel door with the upper panels glazed is approached by stone steps and has a wood doorcase with fluted and cabled columns on pedestals, and a pediment. Roof tiled.' 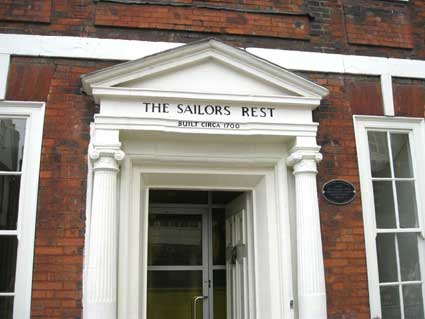 The lettering above the front door is unmistakable:

The missing possessive apostrophe can almost be forgiven by the fact that this place could so easily have been demolished if it wasn't for the determination of the Ipswich Society. Unthinkable in such a street of character and importance in Ipswich history. 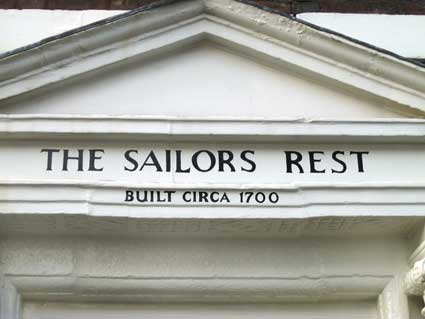 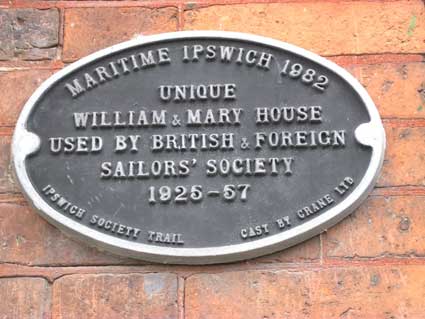 'The port of Ipswich, whose old docks are now a leisure marina, was the seventh most wealthy town in England in the 1520s. Its ships sailed forth from the quays regularly to the Low Countries, to France, Spain, Portugal, to Barbary in North Africa and to the mouth of the Baltic. Ipswich ships worked in a thriving coastal trade. From Ipswich to London they carried cereals, butter, cheese, plants and seeds, returning with wine, imported fruits and tobacco, as well as finished textile manufactures, of which items the town’s own production was now in decline. The ships also braved the hazards of the North Sea herring grounds. Even more daunting was their participation in the Icelandic trade. Sometimes ships were wrecked, bringing suffering and perhaps death to the sailors and hardship to their dependants. In 1826 an appeal was published in the Ipswich Journal by “The Ipswich Seamen’s Shipwrecked Society”, which performed its work of mercy until the mid-1930s; the 1700 building is now “The Sailors’ Rest”.' Enough said.

Across the road from here is the vestigial Cobbold's Ales & Spirits sign. And over the way, Curson Lodge and further up a plaque dedicated to V.S. Pritchett. Further down the street is St Peter's Hall.

[UPDATE 9.12.14: John Bulow-Osborne sends this interesting, undated (perhaps 1970s) high view of Silent Street from above Cutler Street with the roof of The Sailors Rest in the right foreground. It was possibly taken from the roof of St Vincent House in Cutler Street.] 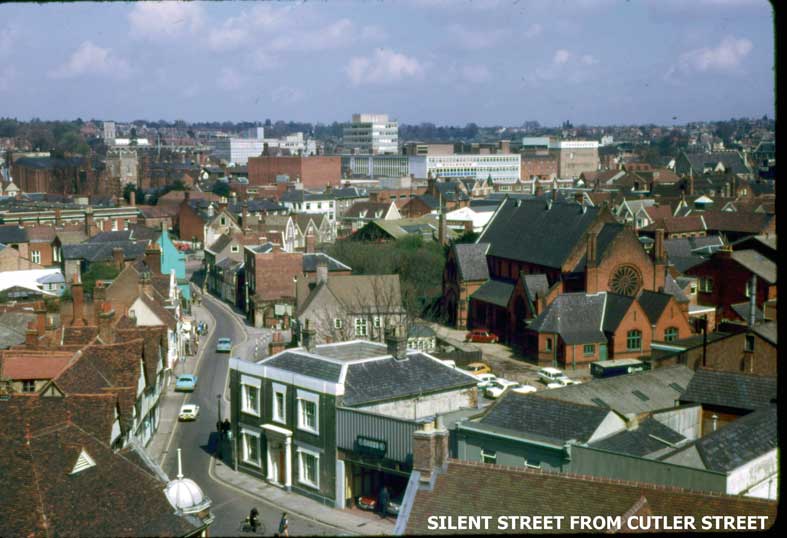 Photograph courtesy John Bulow-Osborne
John writes: "Just visible [bottom centre] on the grey facade, a Skoda logo, part of the premises of H.O. Cox Car Sales. The Woolworth name is also to be seen in the distance." The double-fronted house which still stands on part of the site once occupied by Curson House is to the left of the Skoda garage. Behind it, a large red-brick church (see update below) which was demolished to make way for the current Serenius Court sheltered housing blocks. Also prominent at lower left is the range of 15th century gabled buildings which stretch up  Silent Street from Curson Lodge on the corner. Architecturally, the buildings form one of the best-known timber-framed landmarks in the town. They were part of the accommodation associated with Lord Curson's House on the opposite side of Silent Street. At top of Silent Street can be seen the horizontal white lines of the GPO sorting office (later moved to Commercial Road/Princes Street), above that the towers of St Peter (with the red C&A store to thre right) and St Margaret above that.

Turret Green Baptist Church
[UPDATE 10.1.14: "It is Turret Green Baptist Church. The congregation moved in with Christ Church Tacket Street in the 1970s (hence the current Baptist/URC denomination) and the church was demolished soon after. The former church in Turret Lane became the Church Hall, and survives today as solicitor's offices. Simon" Thanks to Simon Knott for his encyclopedic knowledge of Suffolk, and Norfolk, churches (see Links)]
See our Rose Lane page for a 1902 map detail showing the two associated buildings. 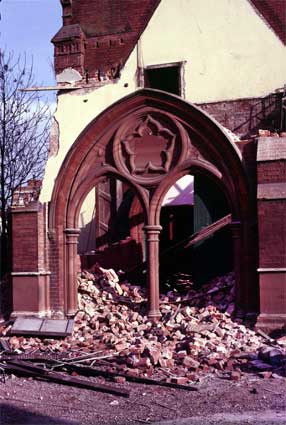 Photograph courtesy The Ipswich Society
And above is a remarkable photograph of the demolition of Turret Green Chapel in the 1970s from The Ipswich Society's Flickr collection (see Links). The Turret Green Baptist Church building opened in 1893 in Silent Street, was a very large brick building consisting of nave, chancel and transepts resembling a building of the established church. This had in turn superseded the Chapel built in 1842; the latter was retained as the Church Hall. It still stands today situated in Turret Lane. A 2014 photograph of the existing building, the original chapel,  can be seen on our Turret Lane page. In 1977, the declining congregation of Turret Green Baptist Church sold their building, and moved in with the Tacket Street congregation. The church became joint URC/Baptist, and took on the name Christ Church, after the former medieval friary nearby. 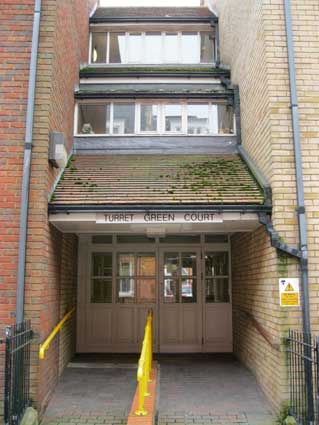 The church's name is perpetuated by flats in Silent Street
See our Rose Hotel page for a 1902 street map of the area.