Parliament Road, and other street nameplates 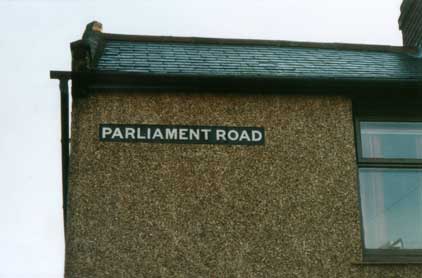 2001 image
'Parliament Road' is a (presumably) cast iron sign which must have been fixed to the brickwork of the end-of-terrace on the corner with Freehold Road. The later pebbledash finish provides a snug frame for the sign which the present owner (again presumably) keeps sharply painted (in negative!) to catch the eye. Other negative paint-jobs on Street nameplates can be found at Dog's Head Street and Vernon Street. 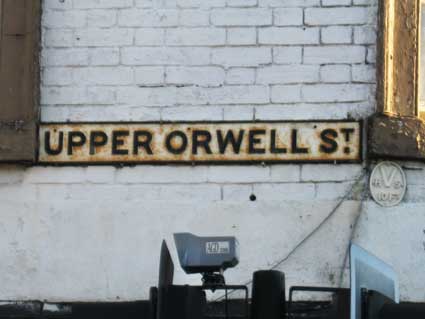 2014 image
This cast iron street nameplate with its characteristic supetior 'T' has both angled clamps around the edge and three screw-hole drilled above the characters to fix it to the brickwork above the café opposite The Spread Eagle public house. There is an oval water hydrant medallion as a bonus (see Street furniture for an explanation). See our Spread Eagle page for a view of round-the-corner in Eagle Street and the street nameplates there. 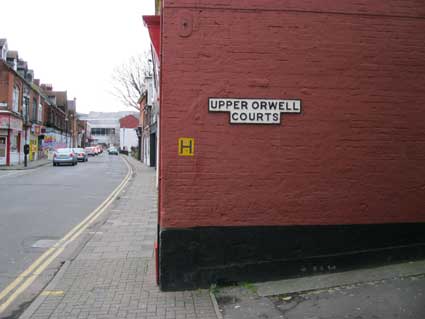 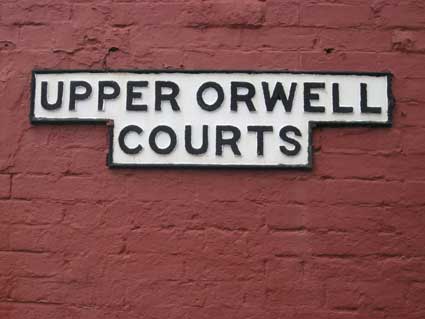 A street name redolent of times gone by. This small lane off 'The Wash' as Upper Orwell and Lower Orwell Streets were once known, now runs up to the parallel Bond Street: the only street to link the two above Eagle Street. Now virtually a mere footway, it is blessed with this impressive (and unusually shaped) thick, cast iron sign at The Wash end. Someone cares enough to maintain the paintwork of the relief lettering; it contrasts strongly with the neglect of the similar vintage Bridge Street sign. We read with some interest that in a past century such was the flow of water down this way from Majors Corner, past Stepples Street towards the Wet Dock, that a man was prosecuted for erecting an illegal water wheel.
Cold Dunghills
Upper Orwell Courts was the site of the 'Cold Dunghills'.  'In the 19th century it was quoted as being a “filthy, dirty, foul slum, full of disease and undesirable elements”. In 1861 it comprised some 20 tenements and 66 inhabitants, and it remained the poorest part of Ipswich. In October 1867 the residents petitioned to have the name changed and it became known as Upper Orwell Court, the name it still retains today. The area was not entirely cleared until just before 1939. No reason is known why it was extra-parochial, but with a name like this it could have been an original waste-land where the town sewage was deposited.  It was just the other side of the town ramparts.  In 1632 it is recorded as “Cole Dunghill”.  ‘Cole’ is the early English for ‘charcoal’, and waste-land was frequently utilised for the making of charcoal. Charcoal and dung are both used for fuel in many parts of the world today. Whichever way it is regarded, ‘waste-land’ was frequently extra-parochial because nobody wanted to go there to collect taxes.' [Information from Planet Ipswich website, see Links]
Below: a detail from Pennington's map of 1778 shows a much more open townscape with trees and gardens around the buildings. Orwell Place has its original name of Stepples Street to mark the stepping stones ('stepples') which were a feature to enable passers-by to cross the flowing waters of the Wash (Upper Orwell Street). Eagle Street is here labelled as the west end of Rope Lane. The future Waterworks Street disappearing southwards to include Angel Lane is here labelled 'St Clements Back Street'. We can see a small pound (so labelled) where stray livestock would be impounded and not released until the owner paid a fine. The narrow lane running north form the pound, then turning through 90 degrees to the east is, in 1778, clearly labelled 'Cold Dunghills'. 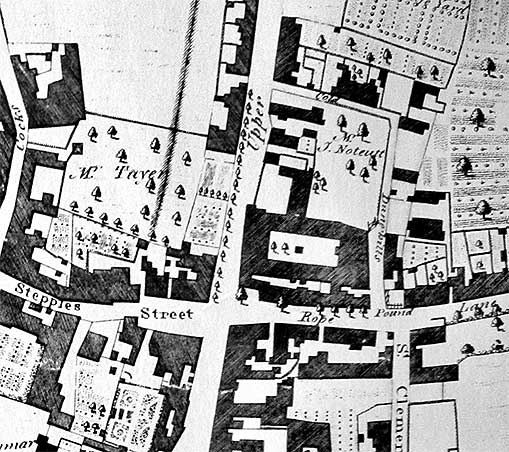 1778 map
The 1881 map below shows a very different road layout. Waterworks Street appears at the lower right at the junction with Eagle Street. The thoroughfare was later continued northwards to St Helens Street and called Bond Street. It looks as if, given a bit of road widening, it used the line of Upper Orwell Courts, which we now discover was 'L' shaped. Five addresses up from The Spread Eagle at the crossroads, is The Eagle Tavern, site of the Palmer's Door Mats sign. Incidentally, The Bulls' Head public house is shown at this date, on the south-west corner of the crossroads (across Fore Street from The Spread Eagle), later to become part of the Martin & Newby shop. 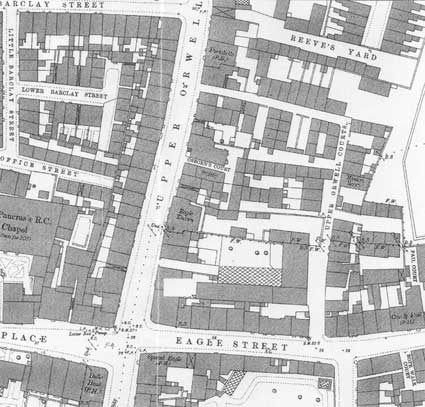 1881 map
Further up the Upper Orwell Street, on the west side is Union Street down which is the ancient trace of the sign for Charles Court; see our 1880s map of the courts and yards for an image. 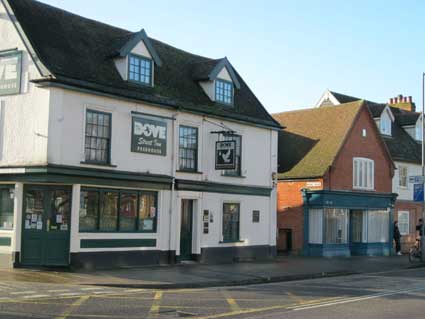 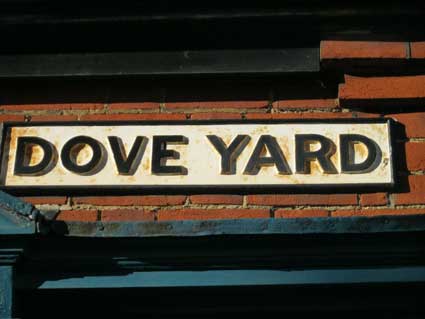 2014 images
Above left: The Dove public house (in 2014 inexplicably entitled The Dove Street Inn) on the corner of Dove Lane, to its right the former Newstead's bakery shop and, now bricked up, the former Nippin café. All these front St Helens Street. The classic cast iron street sign: 'DOVE YARD' is seen above the entry by the former shopfront, an echo of the 19th century Potteries area full of Courts & yards. The clear, bold sans serif capitals and surround are in deep relief against the white background to enable clear readability. 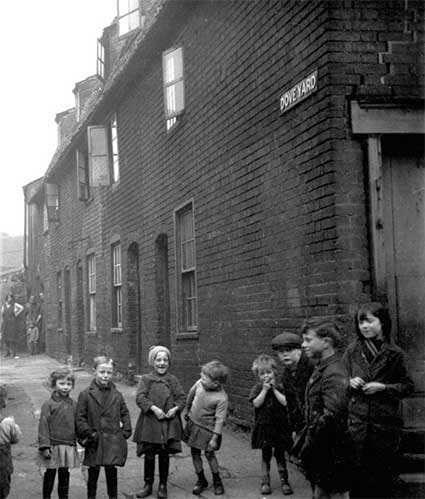 1930s?
Above: Dove Yard as a rather bleak residential road in (possibly) the 1930s. Historian Frank Grace has pointed out that, when looking at old photographs, one can judge the quality of the houses by the levels of the wimdows; if the line of the window sills is even, the builders took care – if the sills and tops are at varying levels, the houses were hastily built. In the above image, the housing is clearly of poor quality, probably late Victorian in vintage, matching many of the residential buildings (often slums) in the adjacent Potteries area of Ipswich at that time. The cast iron street nameplate at the top right may very well be one which survives today – in this case painted in 'negative' (characters white, background black); see also Parliament Road above. 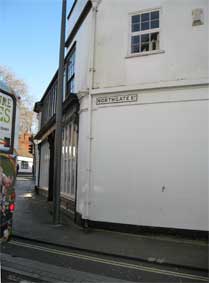 The familiar cast iron style street sign can be seen opposite The Halberd Inn: 'NORTHGATE ST.' 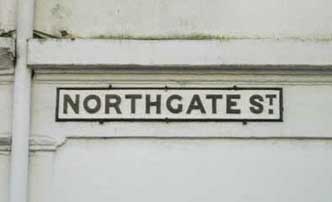 2014 image
Above left: Here the studs fixing the sign to the rendered brickwork are clearly visible, as is the fact that the Alexandra Hair Designs salon has covered the whole thing in their beige masonry paint! (Ten years later, order has been restored and a signwriter has picked out the characters and frame in black.) The superior 'T' above a full stop in 'ST.' marks this street sign out as a partner to the now extinct Bridge Street near Stoke Bridge and the Lower Brook Street sign. Before metal street and road signs, the names were sometimes painted onto brickwork; see Lancaster Road for some vestiges. See our Ipswich Transport Museum page for some rescued examples of street name plates. 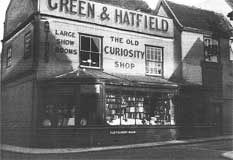 Just for interest's sake, here's a period image of that 'Northgate St.' wall, when the street sign was sited near the pavement: a riot of drop-shadow capitals - probably in two colours against a tinted cream-washed rendered wall:

Green & Hatfield's 'Old Curiosity Shop' on the corner of Northgate Street and St Margaret's Street (a squib of a street running unnoticed from St Helen's Street at Major's Corner and into Crown Street) was once a well-known landmark of Ipswich. You can see the shelves of antiquarian books through the front window – as you used to be able to do in the window of the collector's shop 'Atfield & Daughter' (the wonderful building The Sun Inn) in St Stephen's Lane. Mr Green retired from the business and in the early 1980s was still living in the large house built in 1850 (it had it's own chaise house in the large garden, which still stands today) which stand on the corner of Belle Vue Road and Woodbridge Road between Russell Villas and Shaftesury Villas. 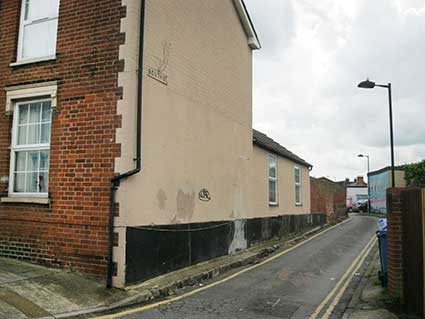 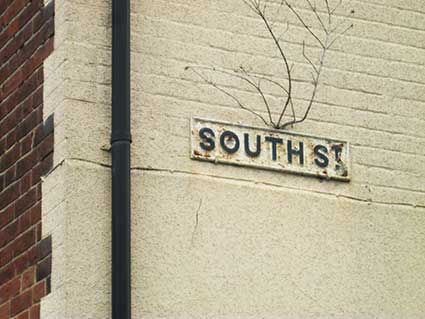 2017 images
Two small points strike one from the overall view at the left: (a) the kerb along the length of the house is composed of granite setts; (b) one has to admire tenacious Nature for finding a way for a weed to seed itself above the street nameplate.
There's not a lot in South Street these days: on one side the back gardens of the houses in Ann Street and on the other a car park. However, the 1902 map detail (below) show it full of houses on the south side of South Street, so it wasn't merely a back lane for the Ann Street houses. In 2020 the only address in the street you might come across is the South Street Studios, a community music and performance organisation at the eastern end. 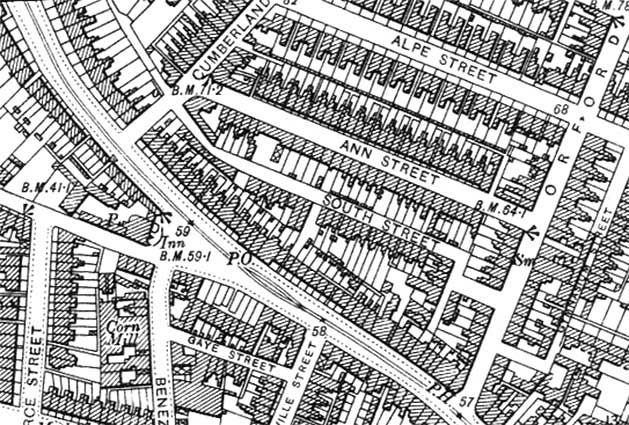